The Best iPad Magnetic Stands (And Why You Need One)

The Best iPad Magnetic Stands (And Why You Need One)

If you know me, you’ll know I rarely let go of review units, which is why I have too many Macs, 83,912 pairs of noise-cancelling headphones, and more mechanical keyboards than I have socks.

I also have lots of iPads, and this presents a pretty interesting problem: how to put each one to use.

I feel it my duty to do so. I’m in a privileged (read: ‘expensive’) position to have access to nearly every iPad Apple makes, and it seems only fair that I find a use case for each one.

However, using multiple iPads for content consumption feels a bit extravagant, which is why I’ve been looking at different ways to use my iPad armoury alongside my Macs at each of the 2,314 desk setups I now have (I know – my mum told me a million times not to exaggerate).

This has led me down the path of a fascinating yet often overlooked iPad accessory – the magnetic stand, and I’ve found four which I think are worth a look if you’re keen on significantly increasing the functionality of your iPad.

Why get an iPad stand?

The iPad is a brilliant device, whether you’re using it to consume or create. But it has always played a rather odd role in my life.

As much as I want to integrate iPads into my daily work and leisure time, they’re so easily sidelined, thanks to the comfort of macOS on my M1 MacBook Air, and the ease with which you can do everything on an iPhone these days.

In my experience, iPads have to fight hard to play a role in whatever it is you’re doing. And Apple knows this, which is why they keep integrating the iPad more wholesomely into the ecosystem.

Sidecar and Universal Control are two examples of Apple fighting the iPad’s corner. The former enables you to use your iPad as a second monitor for your Mac, while the latter is an ingenious way to share the same keyboard and trackpad between your Mac and iPad. 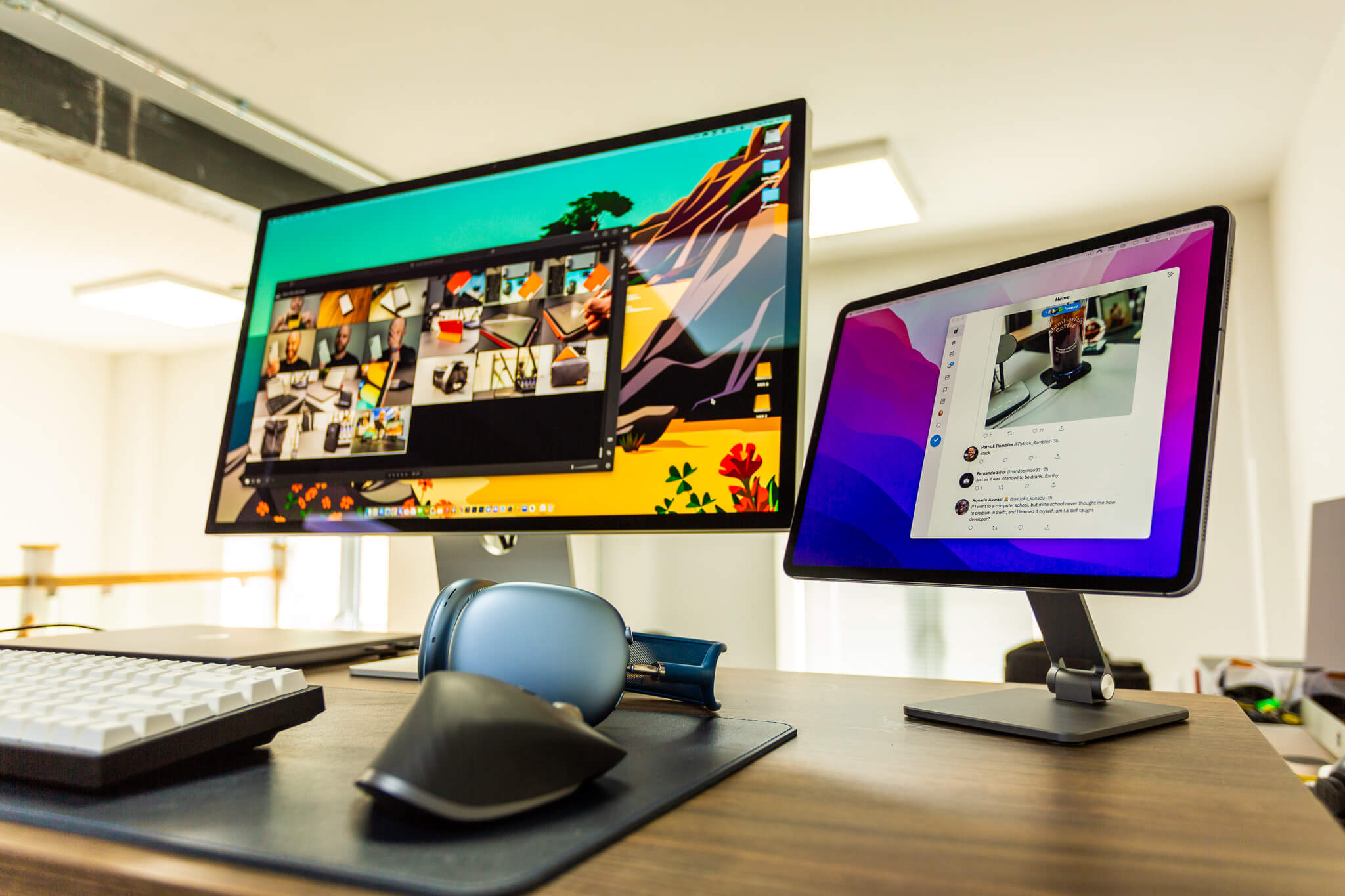 Both of these features are brilliant methods for integrating the iPad into your daily work, but they’re rather incomplete without something to place your iPad on – hence the need for some form of stand.

The other reason for using an iPad stand is if you want to turn Apple’s tablet into a full-on touchscreen computer. Which, with the addition of a keyboard and trackpad or mouse, you can; the stand is the missing element you didn’t know you needed. 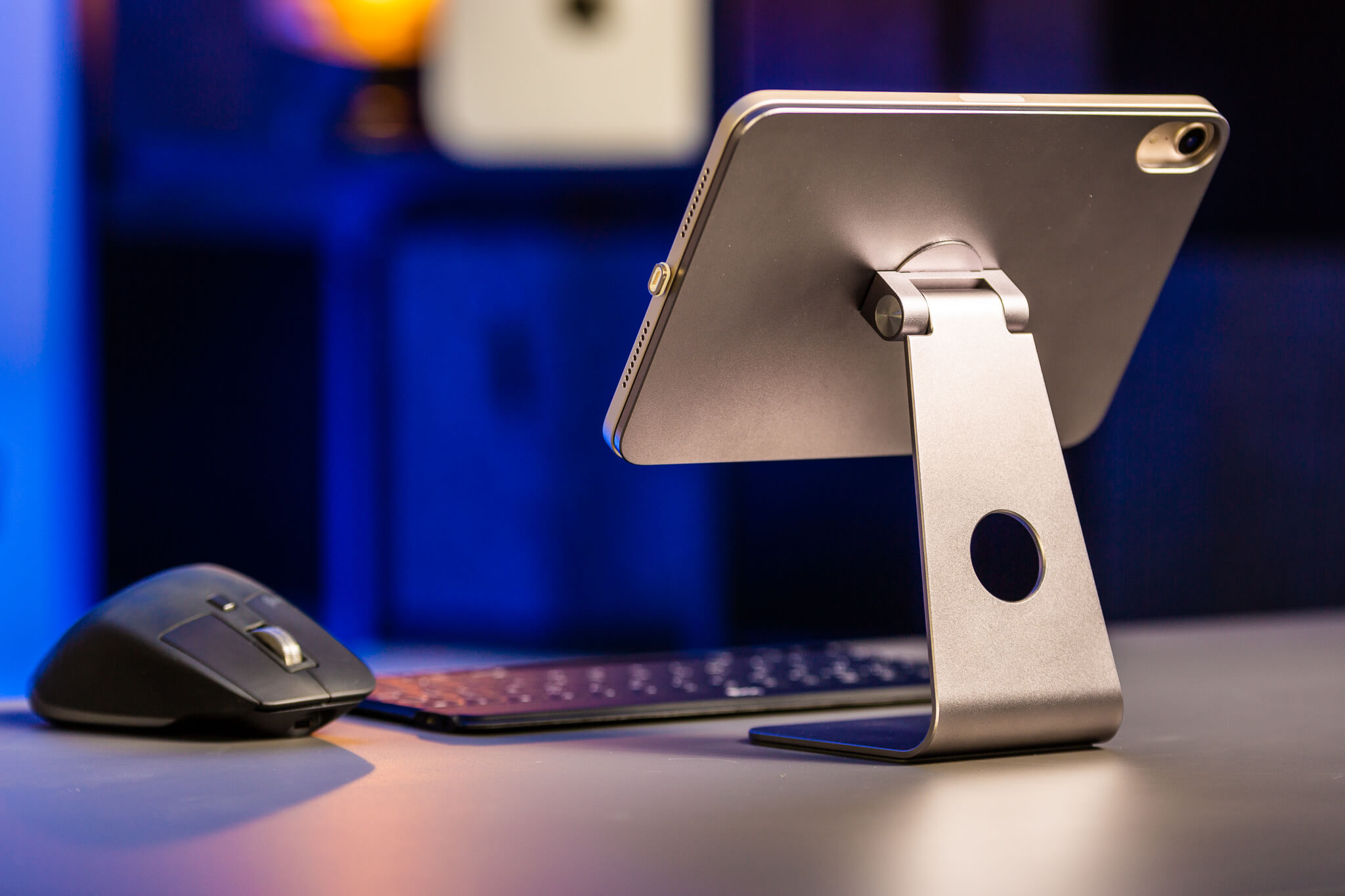 So, now that I’ve hopefully given you some food for thought when it comes to use cases for iPad stands, let’s look at four great options.

“[It’s] Just been a three-year blood, sweat, and tears kind of product.”

Those were the words of CharJenPro’s co-founder, Charlie Yoo, when I confirmed that I’d be featuring his magnetic iPad stand in this review. 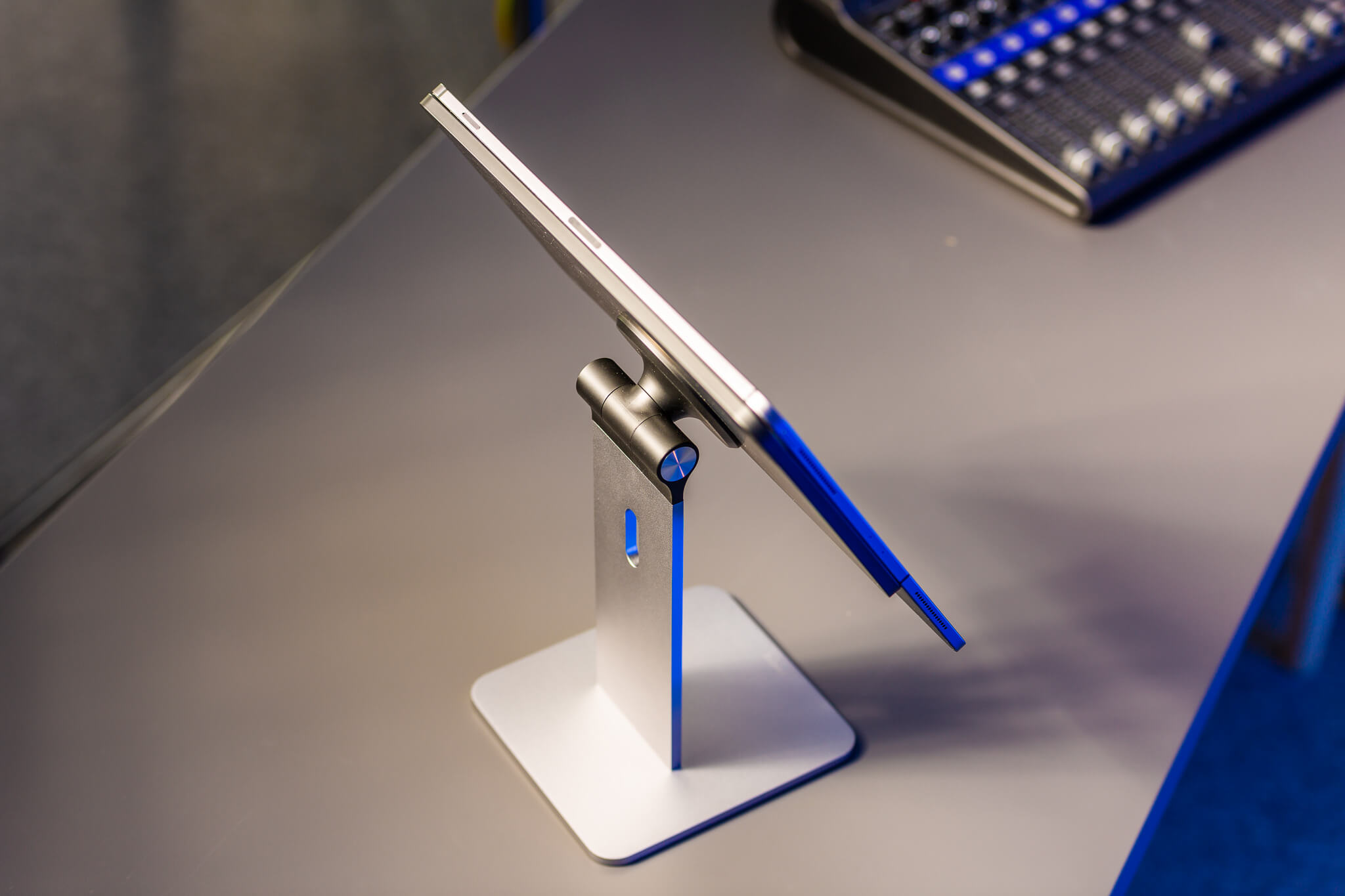 Clearly, this product means a lot to CharJenPro, and their enthusiasm for it reveals how transformative this type of iPad accessory can be for users.

The self-proclaimed “first and original” magic stand for the iPad and iPad Air is known affectionately as the ‘MagFlött’. It raised over $200,000 via Kickstarter and Indiegogo campaigns and features a fully patented design.

The MagFlött has a lot going for it. It’s made from solid aluminium and features a microfibre-lined magnetic surface to which your iPad safely attaches. There’s full 360-degree rotation on offer, enabling you to position your iPad either horizontally or vertically, and it can be tilted at virtually every angle, too.

But there’s one feature I love about the MagFlött which has so often been an afterthought (or neglected entirely) on iPad stands I’ve used previously: cable management. You see, the MagFlött comes complete with a high-quality angled USB-C cable which slots neatly through the hole in the back of the stand and almost invisibly into your iPad, keeping it charged or connected to your Mac, without fuss. That gets a huge thumbs up from me.

I’m a huge fan of Benks. Their AirPods Max stand remains one of the most popular accessories I’ve ever reviewed, and for good reason: it looks and feels like Apple should have made it.

So, when Benks got in touch to see if I’d like to check out their new Infinity stand for the iPad, I jumped at the chance. 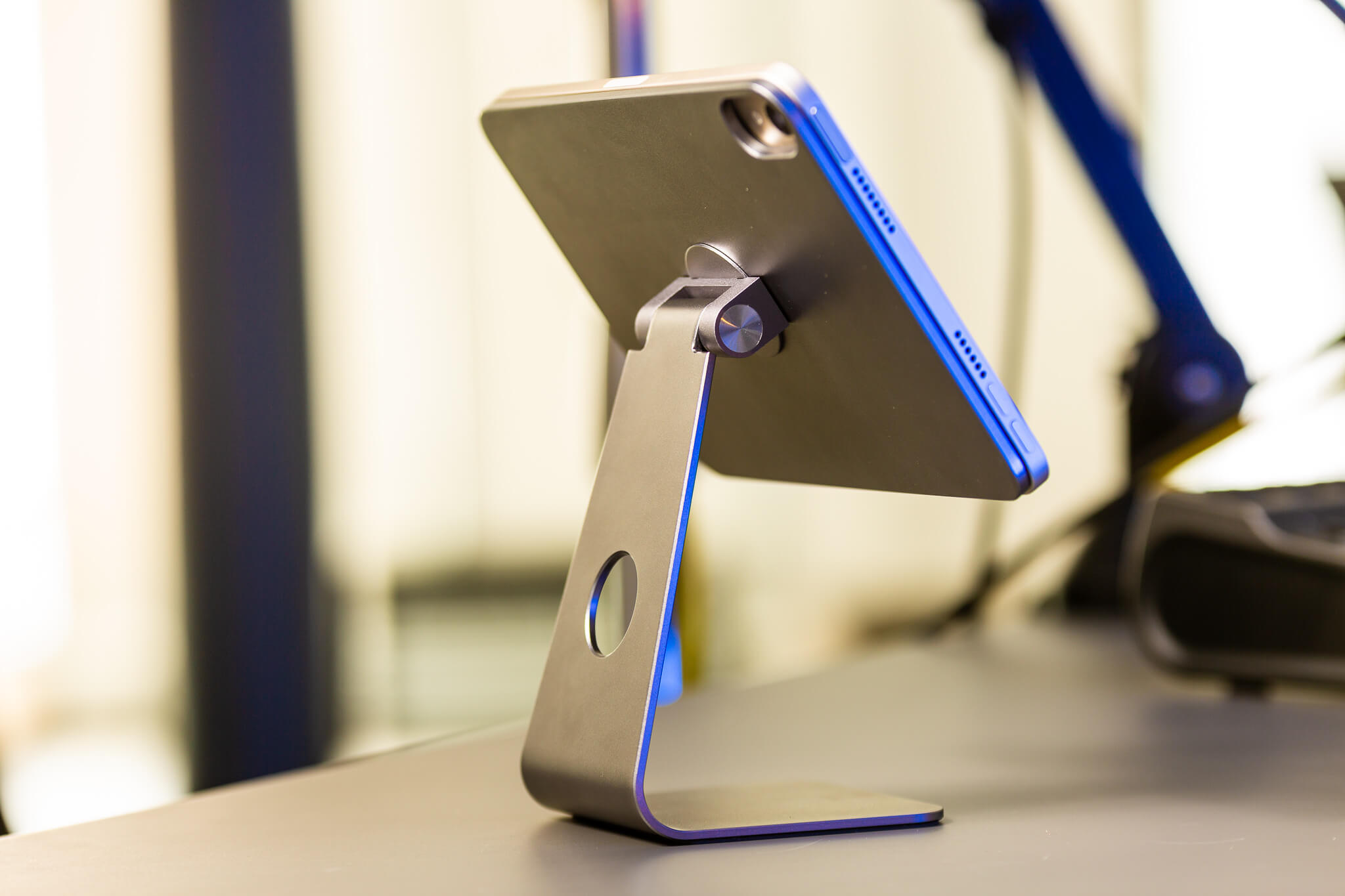 The Infinity stand is the cheapest option on this list, but that doesn’t mean you’ll have to sacrifice build quality if you opt for it. Just like every Benks product I’ve tested, the Infinity is built like a tank. The hinge is stiff (possibly a little too stiff) and the magnets confidently take a hold of your iPad.

I opted for the iPad mini version, which fits the iPad mini 6 perfectly. Indeed, if that’s your iPad of choice, the Infinity is the only magnetic stand on this list to cater for Apple’s tiniest tablet. And trust me, if you think the iPad mini is too small to justify a stand, think again; I’ve loved having the ability to perch mine so elegantly and safely next to my iMac while working away in the kitchen.

It’s double-hinged, too (although the pre-release version I was sent didn’t have the base hinge), which means you have the option of lowering the iPad to the table if you want a super low-profile angle or folding it flat for easy transportation. Portrait and landscape orientation are also available via the 360-degree adjustable mount.

Benks has done it again. The only criticism I have is the fact the panel to which the iPad mini attaches features the exact same dimensions as the iPad, making it a little tricky to detach. But that’s a small gripe.

Fancy something that’s a bit more than just a magnetic iPad stand? Magfit reckons it has you covered with its take on a fully integrated hub and iPad stand solution. 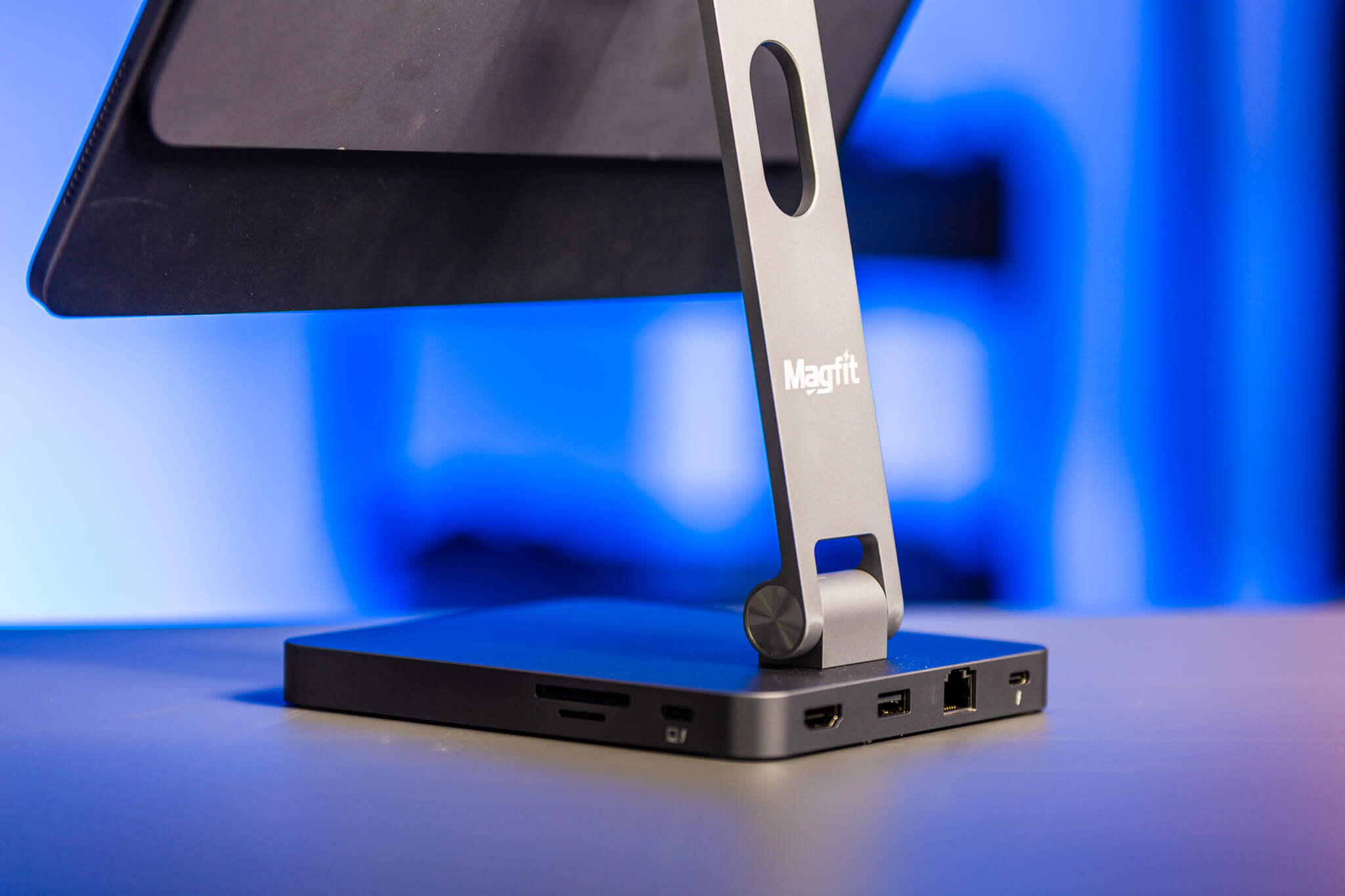 It took me a little while to work out exactly how the Magfit operates, but it’s actually quite straightforward when you consider that it is, in essence, an iPad stand and 10-in-1 hub combined.

There are two ways to use it. You can either connect the supplied USB-C cable between the hub and your iPad or connect the hub directly to your Mac. The former allows you to use all of the ports on the hub within iPadOS, from the HDMI output to the ethernet connection. The latter switches access to those ports to the Mac, but you’ll lose the ability to charge the iPad directly from the hub.

The Type-C PD input on the rear of the hub can draw 100W of passthrough power, but will obviously only charge your iPad at its maximum wattage. The benefit of the 100W is that you can charge a number of devices from the hub – such as your iPhone and AirPods – at the same time.

Rather than using this as a Mac hub (losing the iPad charging is a bit of a bummer in that scenario), it does present a rather awesome use case for anyone who wants to turn their iPad into a fully-fledged multiport device, complete with SD card slots, USB-A 3.1 inputs, and a 4K@60Hz HDMI output.

There’s just one issue – the magnets aren’t as strong as the other stands on this list. And that’s rather unnerving if you’re an iPad Pro 12.9″ owner.

There’s one caveat with all of the iPad stand options I’ve covered thus far: you need a magnetic iPad to use them, and not all iPads come magnetised. Put simply, if your iPad isn’t compatible with an Apple Magic Keyboard, it won’t have the magnets required for options 1 to 3 above.

However, don’t despair, because Magfit has thought of you, too. Enter the ‘Liquid Silicone’ case, which is designed to both protect your iPad and give it the magnets required for stand compatibility (note – the case isn’t in the image below). 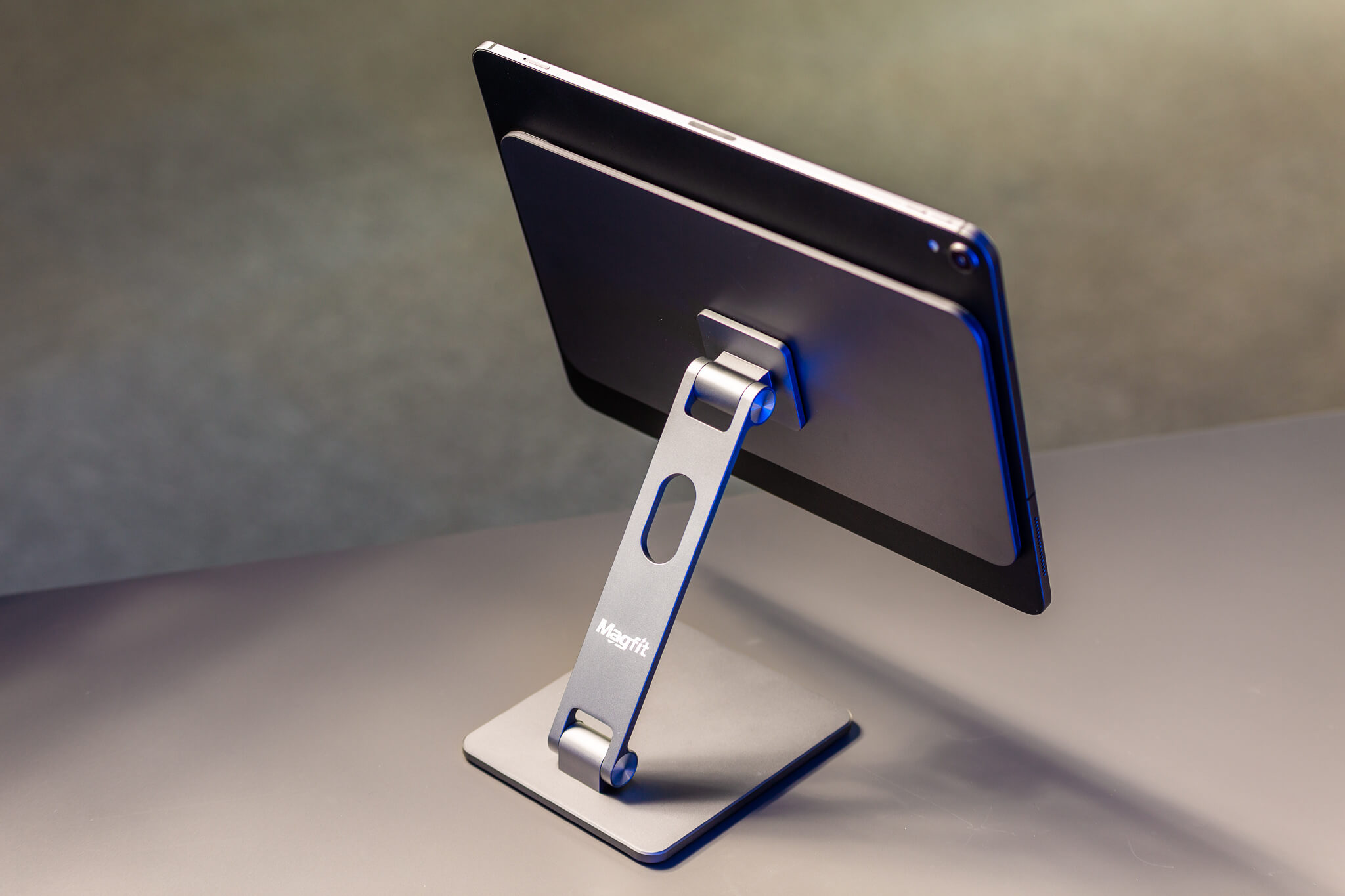 Most iPads are supported (bar the iPad mini) and there’s a useful slot for your Apple Pencil, too. The case is microfibre-lined, scratch-resistant, and relatively lightweight, but it inevitably adds some bulk to your iPad.

If you’re the sort of person who places their iPad in a case immediately, the Magfit silicone case offers both protection and stand compatibility thanks to those magnets. It can be purchased separately, too, but at $50, you’ll need to really want the ability to attach it to a stand.

It’s worth noting that the Magfit magnetic iPad case can also be teamed with the full-blown docking station above.

I’m a full iPad stand convert. I’m still some way from making effective use of every iPad I have to hand, but these stands really do transform Apple’s tablet.

Attach your iPad to a magnetic stand, and it suddenly looks like an entirely different device. It can be a second screen, Universal Control companion, or a conveniently placed consumption device while you’re making dinner.

For me, CharJenPro’s MagFlött just pips it, thanks to the brilliantly simple cable management. The Magfit docking station is an interesting concept and will work well for anyone who likes to consolidate lots of tech into one package, but it’s a bit too fussy for me, and I’m not enough of an iPad power user to make the most of it.

Special mention must also go to Benks for being the only manufacturer on this list that has thought of my favourite iPad of all time – the iPad mini 6.

I hope I’ve given you plenty of food for thought. Let me know in the comments how you intend to use your iPad-on-a-stand!