I love my Apple Watch, but I’m nowhere near as attached to it as I once was. Literally.

This was neatly demonstrated earlier this year when I swapped my Apple Watch Series 6 for a Casio G-Shock for a month. Since then, I’ve become accustomed to wearing the Apple Watch during the week and the G-Shock at weekends. The former has effectively become my ‘work watch’.

Apple needs to do quite a bit to tempt me back into a full seven-day wear cycle. And boy have they missed the boat with the Apple Watch Series 7.

Is this the most pointless, uninteresting Apple Watch update in recent memory?

The only meaningful changes this year

I’ve only watched one review of the Apple Watch Series 7. It came from Mr MKBHD, and revealed exactly why this year’s release is so troublesome.

“So, if [Apple] watches did ’s’ updates, this would be a Series 6s, for sure,” he explains at the start of the video. “Either way, what you need to know, is it’s a minor update.”

Then, in a move which – as he freely admits – risks “tanking this video’s watch time”, Marques reveals everything you need to know about the Apple Watch Series 7 – in about five seconds.

It’s basically a Series 6 with a slightly larger display and slightly faster charging.

That’s it. That is your lot. In fact, you can probably stop reading this article here, too – particularly if you’re the owner of a Series 6, Series 5, or, arguably, even 2018’s Series 4.

Still interested? Ok, let’s look at what Apple says about the new Watch. It does indeed apparently have the “largest, most advanced display yet”. It’s also their “most durable Apple Watch ever”. There are “breakthrough health innovations” and, as MKBHD pointed out, up to 33% faster charging (thanks to USB-C).

There’s new colours, a slightly brighter always-on display, and user interface tweaks to make use of that additional screen estate, including a QWERTY keyboard that no one will use.

Just look at it. I’ll give you a moment. I’ve got all day. 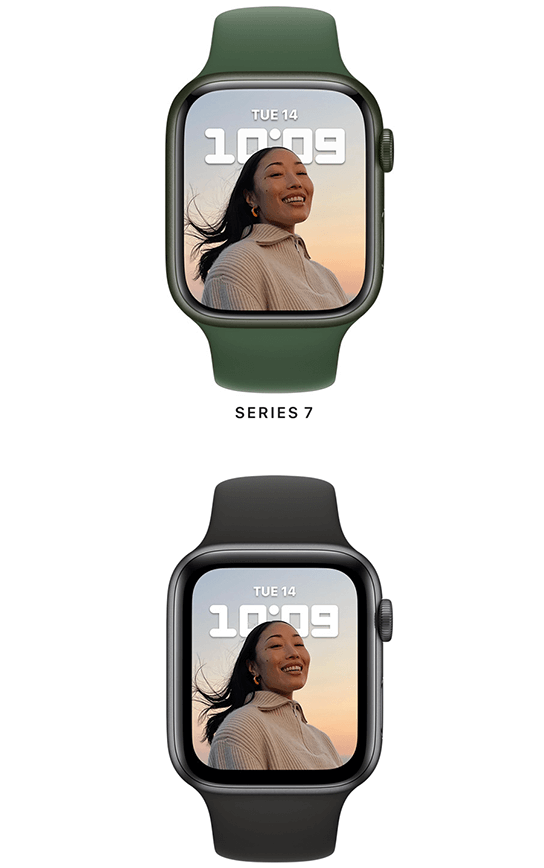 Don’t get me wrong – for owners of Series 3 and below, this will be a massive upgrade, but the Series 7 is rendered utterly pointless for anyone who has owned an Apple Watch made between 2018 and now.

Is this what Apple wanted?

I genuinely don’t think it is. The rumour mill has been awash with stories of failures in production that forced Apple to develop and launch a lesser Apple Watch.

That could all be utter nonsense, and I completely understand the counterargument; Apple works years ahead with this stuff, and the Apple Watch Series 7 we see today will likely have been in design and production for a considerable amount of time.

John Gruber of Talk Show fame recently suggested that the flat-sided design renders we saw leading up to Apple’s California Streaming event were real. His theory is that it is, in fact, the next-generation Apple Watch SE, which is admittedly due an upgrade.

Whatever those renders were, they were far more interesting than what we’ve been left with. So, whether Apple really did run into significant manufacturing issues with the real, big upgrade to this year’s Watch, or if the technology simply wasn’t quite ready for mass consumption, I refuse to believe that Tim and co. are ultimately happy with this version.

Apple wants people to upgrade their devices as often as possible. It’s why new colours and modified designs are such common tactics used to elicit the feeling of something being ‘new’ – even if the internals are effectively the same.

The Apple Watch Series 7 has none of that. Even the new colours are dour and uninspiring (a common theme among current Apple devices).

There was a moment of hope during the unveiling of the Series 7 when we were treated to the scene of a cyclist falling, Apple Watch-first, onto rough ground. Could this finally be the Apple Watch Rugged Edition I’ve been hoping for, I wondered? Nope. It’s just slightly toughened, thicker glass, which will still smash and crack.

So, who is the Apple Watch Series 7 for?

The biggest upgrade when I went from the Apple Watch Series 3 to the Series 4 was that considerably larger screen. It was a genuine improvement and offered real-world benefits. Finally, the computer on my wrist felt like the device I’d dreamed of as a kid, and the user interface no longer felt cramped.

So, if you’ve currently got a Series 3, the Series 7 will be a huge upgrade – literally. You’ll love it.

My second most enjoyable Apple Watch upgrade came when I moved from the Series 4 to the Series 6. The addition of the always-on display fixed a perennial problem with my previous Apple Watches; they weren’t very good at being watches.

So, if you’re making a similar leap, once again, you’ll be super happy with the Series 7.

But if you’re a Series 6 owner or just someone who wants to experience an Apple Watch that makes a massive leap over the devices we’ve become accustomed to since 2015, the Series 7 is a frustratingly disappointing device.