Why Apple’s Stage Manager Confuses Me

Why Apple’s Stage Manager Confuses Me

There’s always one stand-out, surprising new feature announced at WWDC, and this year, many would argue that it was Stage Manager.

This new way of multitasking on both macOS and iPadOS seeks to solve the issues inherent in multitasking and window management.

No matter how tidy you are as a computer user, you’ll inevitably get halfway through your day having opened – and left open – countless apps and folders. Sifting through that stuff to find what you need is always stress-inducing and a needless waste of time.

At least, this is what Craig Federighi had us believe during the reveal of Stage Manager last month.

But is he right?

I’ve been using the new feature on the public betas of both macOS Ventura and iPadOS 16, and I need convincing.

What problem is it solving?

I think it’s worth noting that I consider myself quite efficient when it comes to my use of apps and windows, which is why Stage Manager may simply not be for me. I usually only leave the apps open that I’m actively working on, and I’m obsessed with closing windows once I’ve grabbed what I need (although this is often to my detriment when I need to go back into that window moments later).

Stage Manager assumes that you don’t do this. It works on the basis that you keep a tonne of stuff open on your Mac or iPad and, therefore, need some help sifting through it all.

It does this by setting aside an area on the left-hand side of the screen for the apps and windows you have open. If any of them have multiple windows or apps within them, they appear as ‘piles’ (why did they choose that name?!) which you can quickly flick through.

Curiously, split-screen app groups don’t appear in Stage Manager. To surface those, you have to head into Mission Control or swipe left with a four-finger trackpad gesture. As someone who uses split-screen apps consistently, this is a bit irritating and disorienting.

Stage Manager does, however, succeed in making your working environment considerably tidier and less stressful. But it also reduces the available screen estate and requires a complete re-think of how you use the device.

You have to turn it on, too. Stage Manager is a feature which can be found in Control Centre on both the Mac and the iPad. Once switched on, it becomes the default method for the operating system to organise everything you currently have open.

As far as Apple is concerned, this is not a default feature, which begs one big question.

Is it too much for normal users?

I use the word ‘normal’ a lot when reviewing tech, and I feel like I always need to explain that it is in no way patronising or derogatory.

I consider myself to be a normal user most of the time, therefore I know exactly what works for most people when it comes to getting the bread-and-butter stuff done.

Speed, efficiency, and clarity are what make for a great multitasking experience. Knowing where the next app you need is located and exactly how to surface it as fast as possible will help you get jobs done quicker. Gaining as much screen estate as your display affords will make you more productive. Arranging multiple apps to aid referencing will ensure your work is accurate and fast.

We can do all of this stuff already on macOS. I’ve never really felt shortchanged when it comes to window management or the ability to switch cleanly between apps. Thanks to Spotlight, the Dock, and a bit of proactive window management on my behalf, I rarely feel like I’m losing time making my way around macOS.

I’d guess that most other normal users feel the same. Despite Craig and co.’s constant search for new ways to leverage multitasking, I’m not convinced anyone has really been asking for them.

But is it a different story on the iPad?

I’ve never enjoyed multitasking on the iPad. It has always felt tacked-on and impossible to discover by happy accident; instead, the split screen control and ’slide over’ features are far more likely to get in your way. 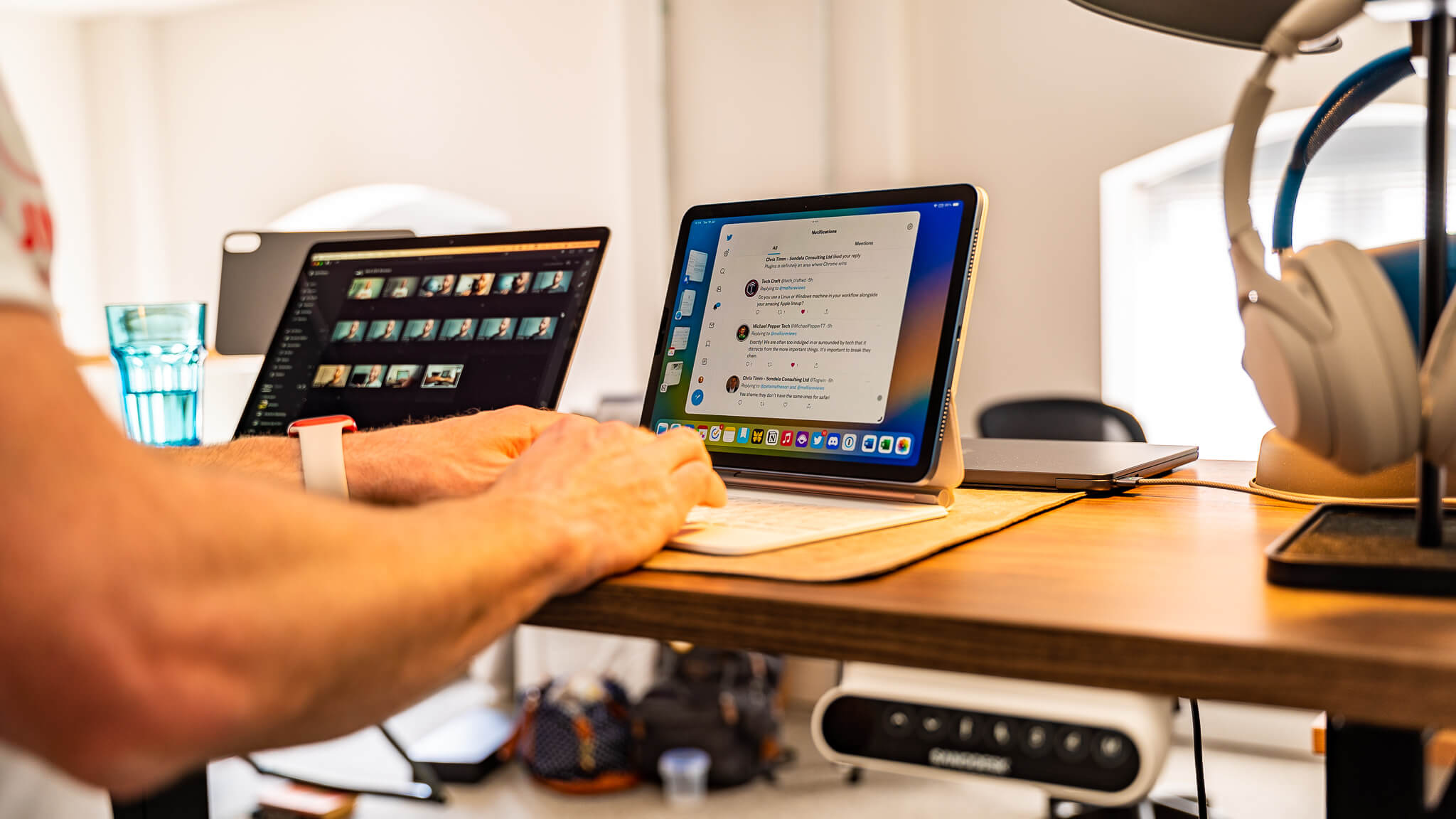 This makes Stage Manager a far more tantalising prospect on the iPad. Indeed, it feels more at home on Apple’s tablet than within macOS, simply because it isn’t following decades of burned-in multitasking behaviour.

Stage Manager works identically on iPadOS 16. You get your same piles (argh – Craig!) on the left-hand side and the introduction – finally – of resizable windows on the iPad.

You still lose screen estate and, just like the macOS version of Stage Manager, it needs to be turned on if you want to use it (it’s off by default), but once you’re in that world, it starts to make a fair bit of sense.

However, things get really interesting when you connect your iPad to an external display. In fact, everything you thought you knew about the iPad changes – immediately. 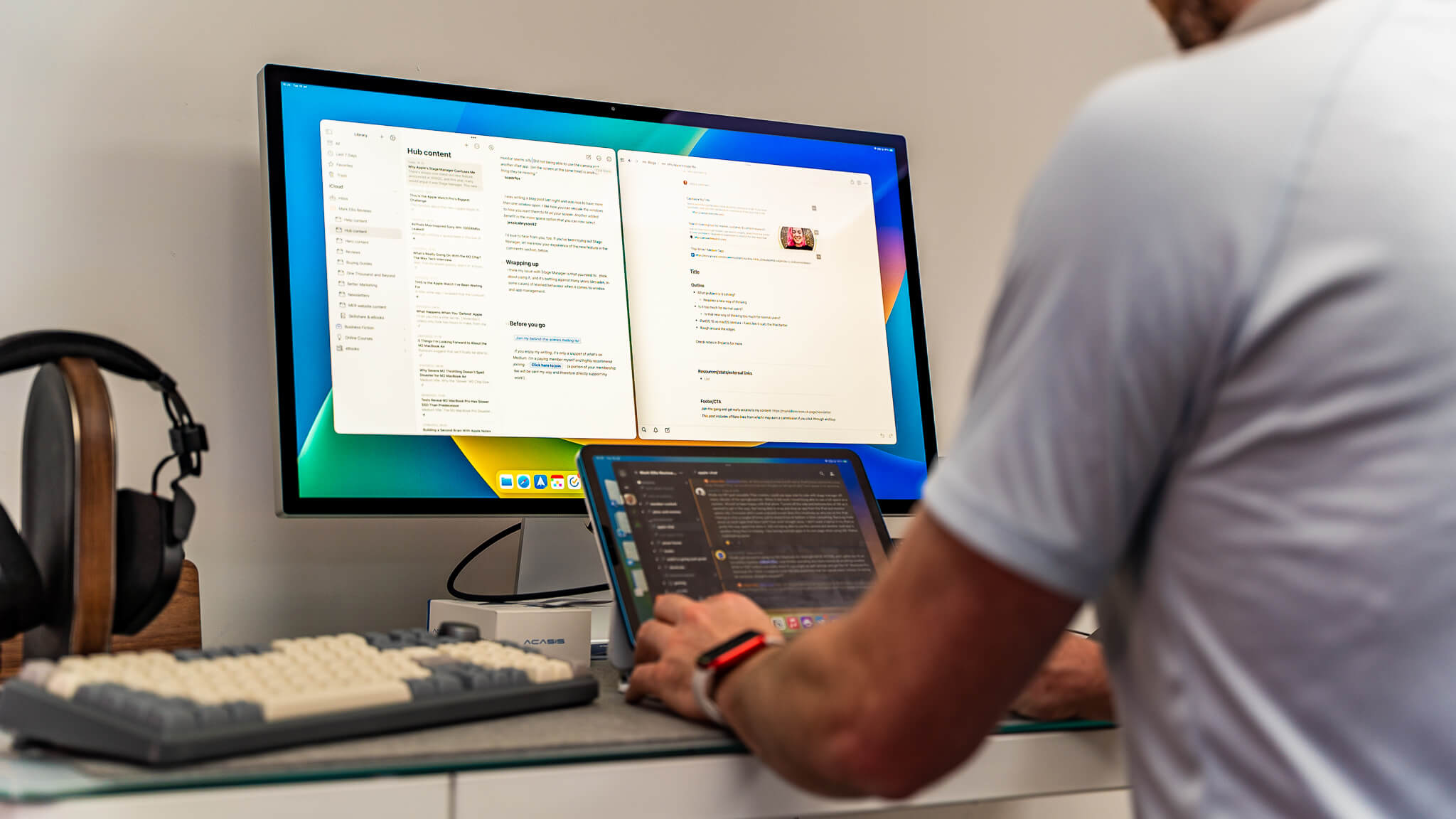 Suddenly, you have access to two screens, rather than the iPad simply mirroring its own. That means multiple apps can be opened at the same time on both the iPad and the external display and fully resizable windows are housed on both.

It’s not perfect (largely down to beta-related bugs) and requires a serious shift in mindset when it comes to how you use your iPad. For instance, I’ve found myself hurriedly trying to arrange apps to make the best use of the screen estate available, rather than actually getting work done – although, arguably, some of that is new toy syndrome.

Stage Manager on the iPad really takes some getting used to (particularly when you throw in an external display) but in quite an exciting way. It’s a new paradigm for the iPad and one that I need to spend more time with. Expect further thoughts on this in due course!

What do others think?

I always take my own opinion on significant new features like Stage Manager with a pinch of salt; I don’t represent every user, after all.

Luckily, I have the awesome people on my Discord server (if you fancy joining, check out my Patreon membership – it’s worth it for access to that community alone) and a bunch of them have also been digging into Stage Manager.

This is what they think about the new feature.

”I’ve been using it on my MacBook and I really like it as a paradigm for window and virtual desktop management. I have a couple of niggles (like I wish I could drag a window set in sometime rather than just one app at a time).

”The way I’m using it, Stage Manager lets me have multiple active app groups in one virtual desktop, while I use other desktops to host other inactive apps.”

“[It] Made my M1 iPad unusable. Files app crashes, many reboots of SpringBoard, etc. When it did work I loved being able to use the full space on a monitor. Would’ve been happy with that alone. Not being able to drag and drop an app from the iPad to the monitor seems silly. Still not being able to use the camera and another iPad app [on the screen at the same time] is another thing they’re missing.”

I was writing a blog post last night and it was nice to have more than one window open. I like how you can rescale the windows to how you want them to fit on your screen. Another added benefit is the more space option that you can now select.

I’d love to hear from you, too. If you’ve been trying out Stage Manager, let me know your experience with the new feature in the comments section, below.

I think my issue with Stage Manager is that you need to think about using it, and it’s battling against many years (decades, in some cases) of learned behaviour when it comes to window and app management.

This is the case on both the iPad and the Mac, but Stage Manager arguably feels more suited to the former. As mentioned earlier, it’s more exciting on Apple’s tablet than it is on macOS, where it feels confusing and almost irrelevant.

Regardless, I’ll be spending much more time with Stage Manager over the coming months and will report back.