I’ve not had the best luck with deliveries from Apple.

Of the countless Apple devices, peripherals, and accessories I’ve purchased over the last 18 months, only one has arrived on time.

Little did I know it was going to get worse.

That isn’t a MacBook Pro

Last week, I received a notification that my shiny new 16-inch M1 Max-powered MacBook Pro would arrive on Thursday 11th November (today, as I write this).

How exciting, I thought. More importantly, how unexpected; this was a good week before the original delivery estimation.

Content with the fact that, finally, my Apple delivery woes appeared to be nearing an end, I sat back, safe in the knowledge that I wouldn’t have to wait too much longer for this beast of a machine.

Then, on Tuesday, I received a text message from Apple congratulating me on having received my “items”. Perplexed, I headed to my email inbox to discover that Apple had also emailed me.

“Explore your Mac with a Specialist online,” read the subject line. The email itself featured a huge header image of a 16-inch MacBook Pro, followed by the immortal words, “Discover all of the amazing things your new Mac can do with the help of an Apple Specialist”.

What ‘new Mac’? I wasn’t expecting it until Thursday!

More importantly, I was sitting in my studio, which wasn’t the delivery address for the device – that was, as you’ve probably guessed by now, my home, which was completely vacant at that point in time.

A quick check of the UPS delivery status page revealed that a package had been left by my front door.

However, once I reached home, expecting to see either a large box placed haphazardly on my porch or, well, absolutely nothing, I was instead met by a UPS-delivered set of blinds (that is, unless Apple did something really controversial with the MacBook Pro redesign).

My expensive new laptop was nowhere to be seen.

I’ve had several conversations with both Apple and UPS since Tuesday. Between them – although, arguably, more down to UPS’ ineptitude than anything on Apple’s part – I’ve been left in the most surreal position I’ve encountered as far as deliveries are concerned.

If I visit Apple’s order status page, it tells me that the laptop was delivered successfully on November 9th. But if I head to the UPS tracking page, it charts one hell of a journey for my 16-inch MacBook Pro. 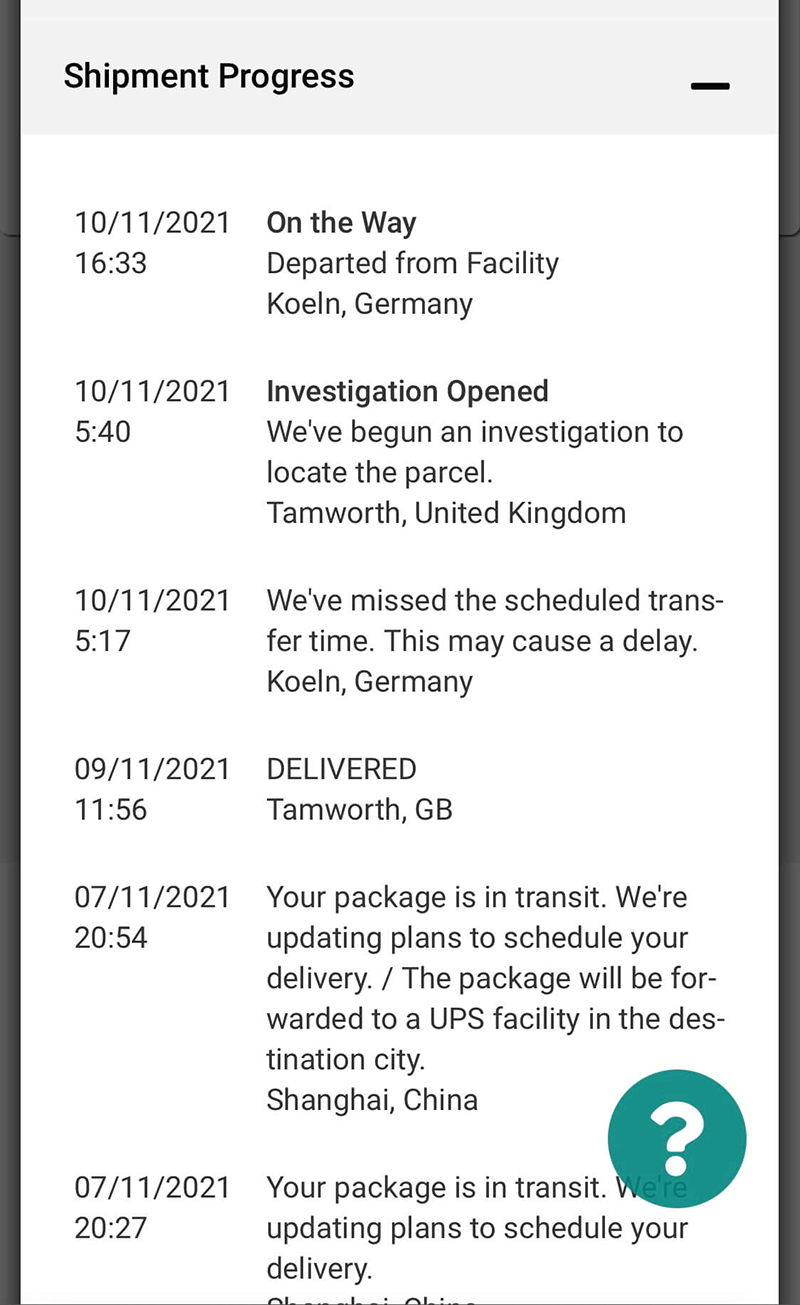 You’re reading that right. According to UPS, after leaving Shanghai on November 7th, my MacBook Pro arrived in Tamworth (UK) on November 9th – the day it was ‘delivered’ to my front door.

Only, as we know, that didn’t happen. Instead, my poor 16-inch MacBook Pro was unfathomably sent to Germany the next day – despite the previous delivery update confirming that it had indeed been ‘DELIVERED’.

Meanwhile, in Tamworth – and approximately 23 minutes after the MacBook’s needless trip to Germany – an investigation had been opened to “locate the parcel”. This is perplexing, because the delivery status suggested that UPS was well aware of the countries to which it had been randomly sending my MacBook Pro.

Regardless, an 11-hour investigation ensued and ended with confirmation from the UPS Crack Team of Parcel Experts that my MacBook Pro was, indeed, in Germany. You know, as indicated on the status page.

As I type, it is now back in transit, heading… somewhere. Who knows – maybe it’ll arrive back in China, or spend the next few weeks backpacking across Europe.

Throughout all of this, the main UPS delivery status page has remained resolutely with an estimated delivery date of today, between 9:45 and 13:45.

Confused? Tell me about it.

UPS has, clearly, made an almighty mess of what should be a very simple delivery. But I think the reality of what happened on Tuesday is actually pretty straightforward.

The UPS guy delivered my blinds (CCTV footage confirms that’s the only thing he brought to my door) and accidentally marked off the MacBook Pro as the item delivered. In turn, that forced Apple’s systems to wish me the best of luck with my new purchase.

We all make mistakes – this stuff happens. But the absolute trail of destruction left on the UPS tracking system, and the fact that Apple thinks I’ve actually received my MacBook Pro is beyond frustrating.

The UPS excuse? Everything is an ‘estimation’ – yes, apparently, even the country in which your package resides while in their care.

Apple’s excuse? Well, to be fair, they don’t really need one; their system is just reacting to an almighty cock-up on behalf of UPS.

Will I ever enjoy a normal Apple delivery experience again?

What do you reckon? Am I going to see my 16-inch MacBook Pro today? Or is it going to join the countless Apple purchases I’ve made and which have arrived super late?

Let me know in the comments.