If you have any interest whatsoever in over-ear noise-cancelling headphones, you’ll be aware that Sony has recently released the successor to their highly regarded WH-1000XM4s.

The just-as-catchily-named WH-1000XM5s (or ‘XM5s’, for short) follow hot on the heels of a pair of headphones that many believe feature the best noise-cancelling on the market and a sound to match.

I’m one of those people. I absolutely love my XM4s, and I’m happy to report that the XM5s build nicely on their predecessor – even if it isn’t in the most spectacular way. They’re more of an impressive second album than a genre-defining return.

They do, however, show Apple a thing or two. You see, when you compare Sony’s XM5s against the AirPods Max, there are five ways in which the former beat Apple’s best effort, hands-down.

1. The pricing is bang-on

I’ve always said that the biggest problem with the AirPods Max is the price. At £549, they are an immediate turn-off for all but the most hardened of Apple fans. You need a serious amount of disposable income to justify the purchase – particularly when there are so many fantastic, cheaper alternatives on the market. 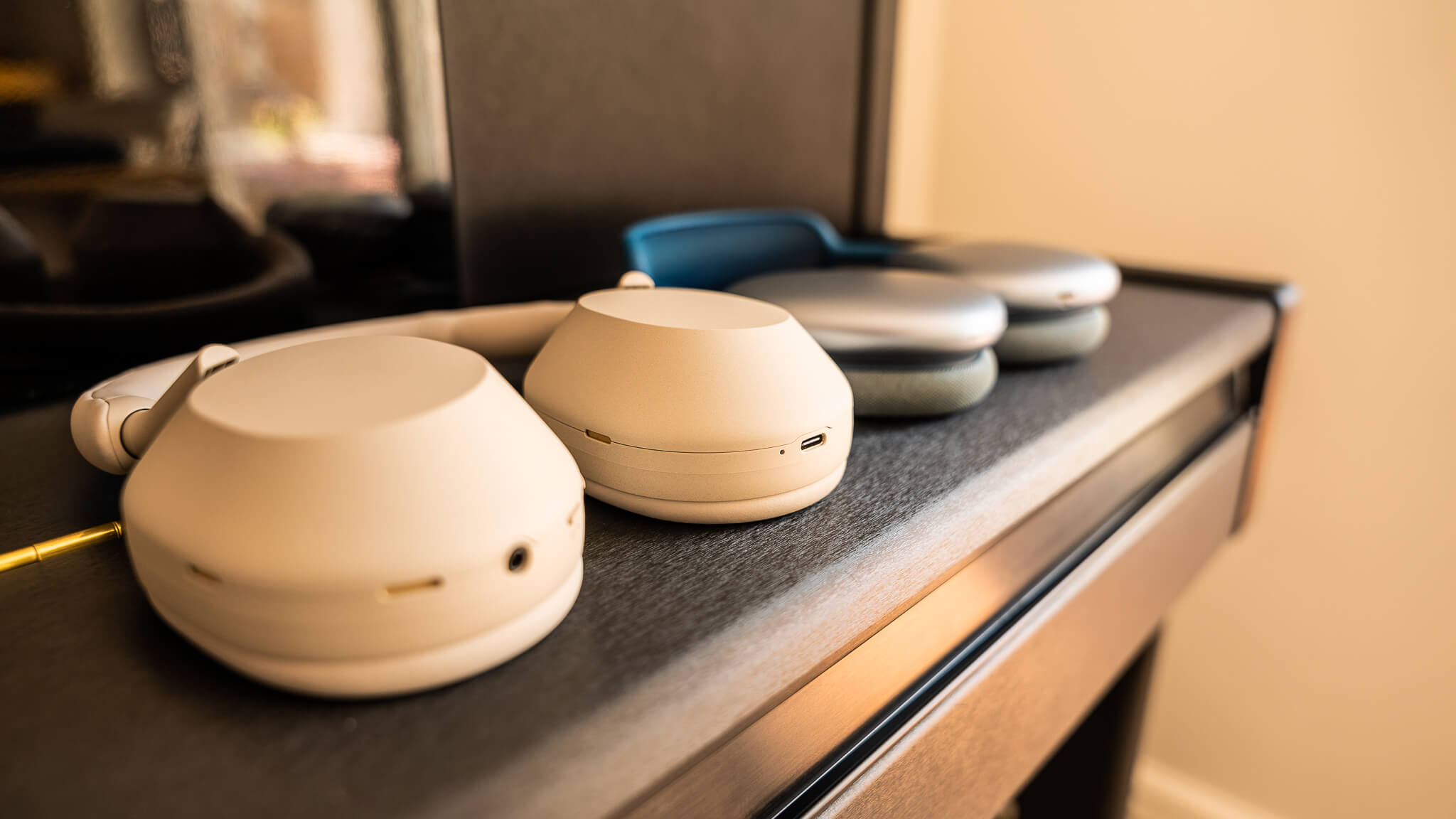 At £380, the Sony XM5s aren’t exactly cheap; indeed they’re at the top-end of many over-ear headphones in the same bracket. But Sony has every right to pitch them at that price point because they’ve already proved what they can do with the previous generation.

Sony has demonstrated that it can make a pair of headphones which not only have the best noise-cancelling on the market, but which also sound superb, are built like a tank, and come with the best case out there.

AirPods Max might be beautifully constructed, but they are just far too expensive for most people. While the XM5s may still be a stretch for some, that money will always be well spent.

The case you get with the AirPods Max is shit. I can’t sugar coat it, I’m afraid (you can’t even roll it in glitter) and I’m not going to spend any more time explaining why it is so bad. Unless you’ve been living under a rock for the last year or so, you’ll be aware that the AirPods Max case is universally – and quite rightly – laughed at. 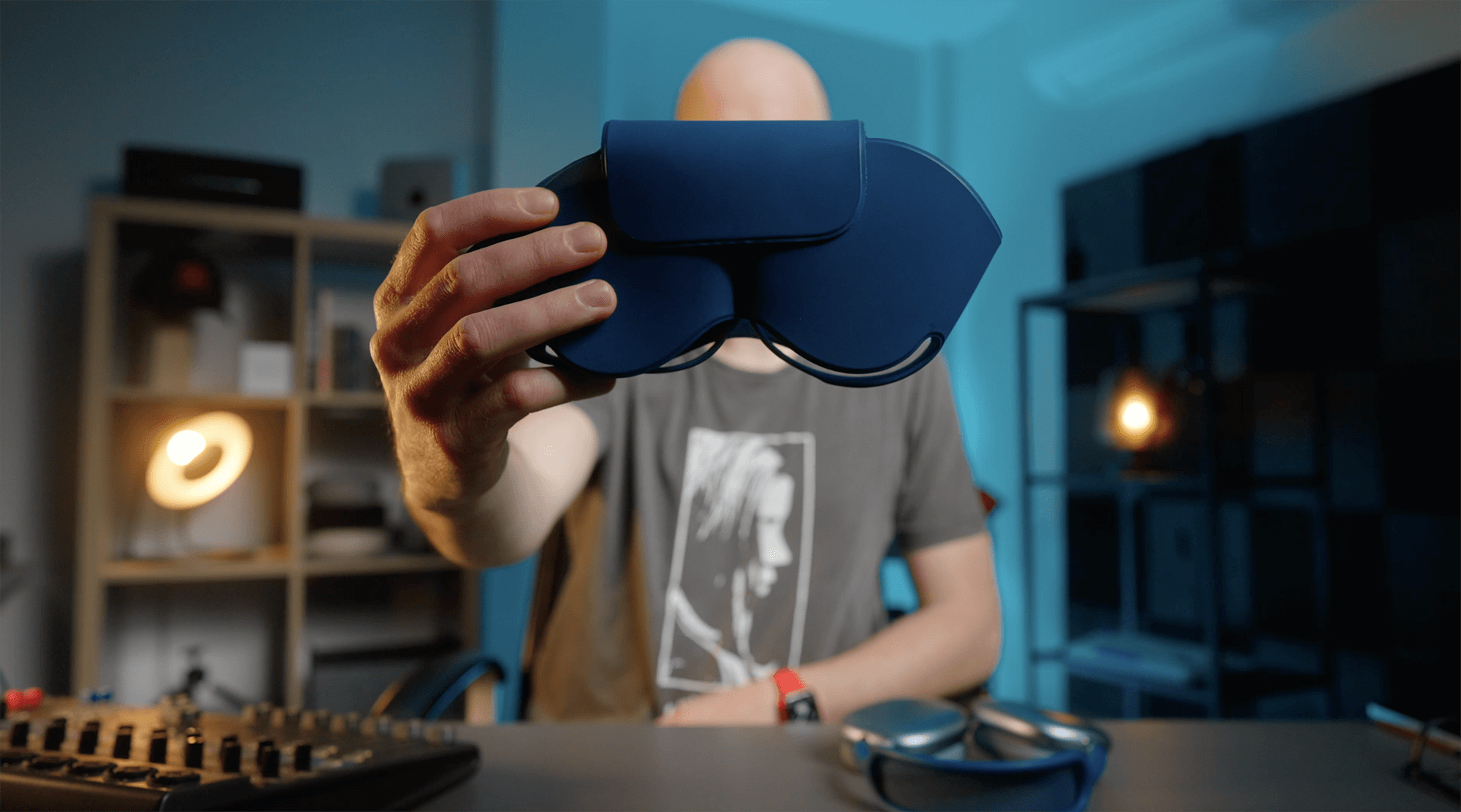 The Sony XM4 case is the best I’ve ever owned. It’s tough, chuckable, and made from a material which doesn’t appear to age.

The case that comes with the XM5s continues this trend. There has been plenty of shade thrown at it due to its size, but that genuinely doesn’t trouble me. As noted in my original review of these headphones, the fact they don’t fold isn’t a problem for me either, and if the trade-off is a slightly bigger case, so be it. 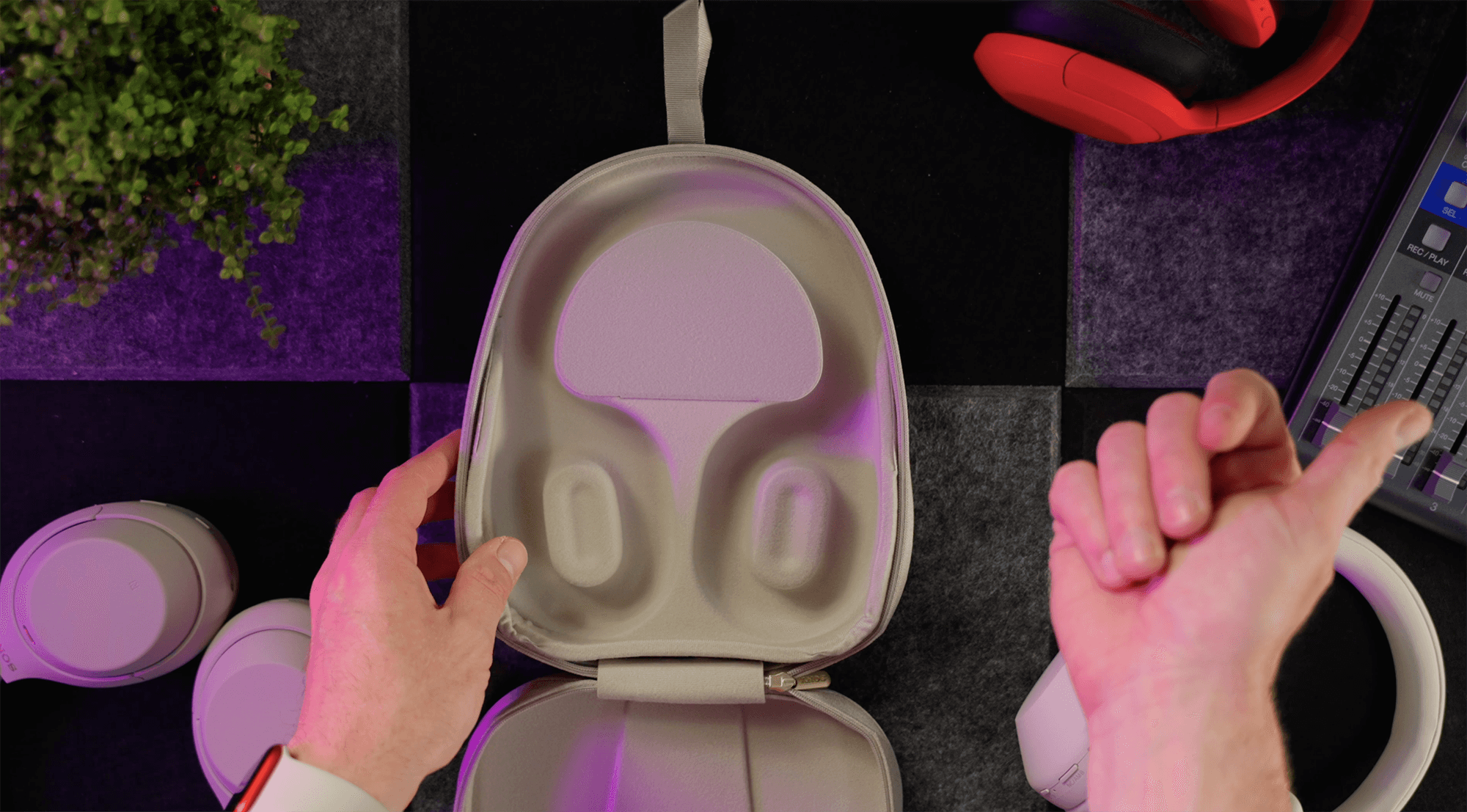 The only thing I can’t get my head around, however, is the foldability. If you weren’t aware, the XM5 case can be ‘crushed’ when empty – for no reason I can think of.

That aside, this is how you make a case, Apple. Get over yourselves and give us something proper next time around, please.

3. A focus on battery life

I hate the Lightning connection on my AirPods Max. Rumours that we may see the end of this dated, proprietary charging port thanks to regulatory pressure is music to my ears – but it doesn’t solve one of the biggest problems with AirPods Max.

Even if they were chargeable via USB-C, AirPods Max still cannot be turned off. The more headphones you get to experience, the more you realise how stupid this is.

I have loads of headphones in my studio. All of them – bar the AirPods Max – can be powered down completely. No ‘low-powered state’ – just good, old-fashioned off. As a result, if I decide to pick up my Sony XM4s after weeks of zero use, they still have just as much battery in them as when they were last on my head. If I do the same with my AirPods Max, they have always drained their battery during that time. 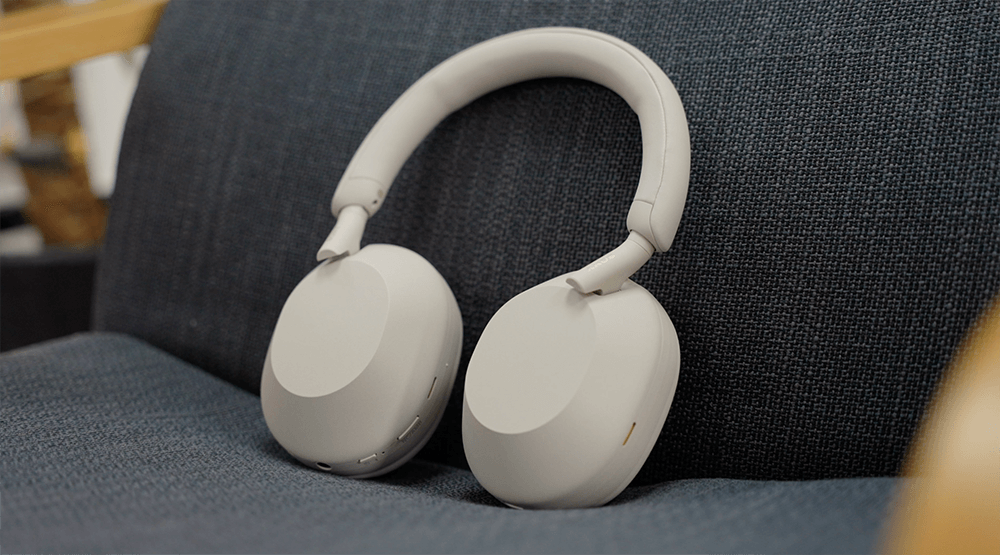 I appreciate this isn’t atypical use; most people only have one pair of headphones. But that’s missing the point – we should be able to turn our tech off completely, and there is no conceivable argument for denying us that ability. It is a short-sighted, obnoxious decision by Apple.

Happily, the XM5s can be turned off, and are chargeable via USB-C. It makes the ownership experience so much more enjoyable and convenient.

The noise-cancelling on the Sony XM5s is the best I’ve ever heard. No arguments.

The AirPods Max come close, but they’re not quite as good. They also struggle with cancelling out lower frequencies occasionally, resulting in a weird booming effect when you turn your head.

If noise-cancelling really matters to you, there’s no competition between these two.

The only thing the AirPods Max could teach the XM5s when it comes to noise-cancelling is how to do the ambient thing properly. Transparency mode is one of Apple’s greatest headphone triumphs and makes the AirPods Max the best over-ear headphones I’ve used for making calls. By comparison, the XM5’s ambient mode is rather unimpressive.

Apple has never given us much control over the EQ of its headphones. You can tweak it via the preset options in iOS, but that’s still rather restrictive.

Sony clearly understands that certain users want ultimate control over the sound produced by their headphones. I certainly know that’s the case, thanks to the comments I receive weekly from people who lovingly explain exactly how they’ve tweaked their XM3 and XM4s.

The XM5s continue this trend. You can fiddle with the frequency response to your heart’s content and fix anything you don’t like about the out-of-the-box sound Sony provides. 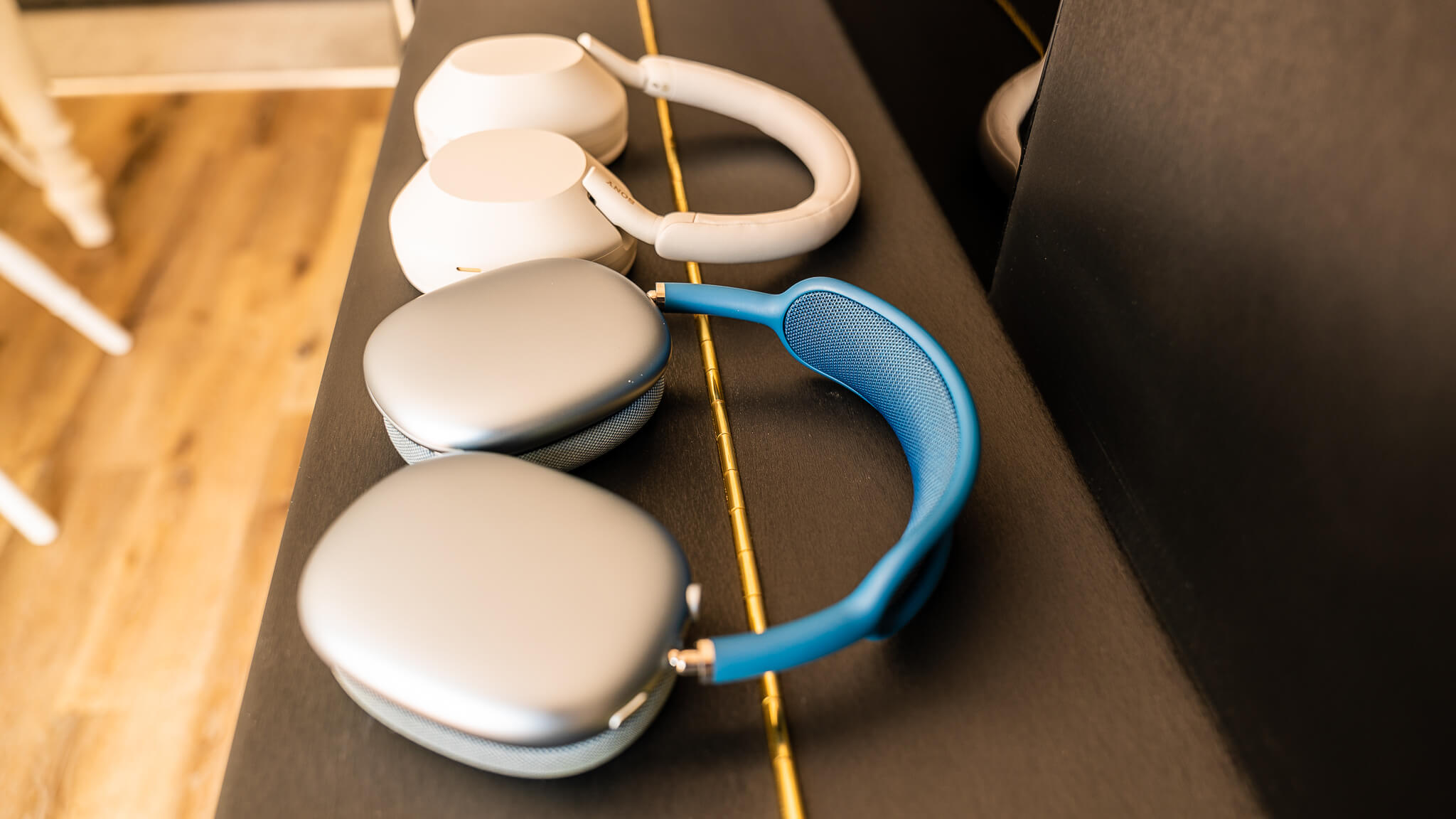 What’s more, the XM5s are compatible with LDAC, which is Sony’s method for transmitting high-res audio wirelessly. It’s capable of carrying three times more data than the regular Bluetooth connection used by AirPods Max and puts the XM5s ahead of the latter in terms of sound quality.

Although we’re expecting something similar from Apple in the future, it’s currently another tick on the XM5 board if you’re particularly fussy about sound.

Both the XM5s and the AirPods Max are fantastic over-ear noise-cancelling headphones. But Sony’s effort beats Apple’s in just about every conceivable way.

However, the price, case, and charging convenience make the XM5s hard to ignore in this particular battle. More tellingly, they reveal that Apple still has a lot to learn when it comes to over-ear consumer headphones.