Return of the HomePod… What’s New?!

Return of the HomePod… What’s New?!

What are you doing to me, man? I thought I had at least three months before anything meaningful would emerge from your spaceship HQ.

Not so, eh? And, fair play – you caught many of us on the hop with this. I, like so many other tech reviewers who aren’t a part of Embargo Club, did not think for one minute that we’d see new Macs in January.

So imagine how surprised, fraught, and fearful for the lives of our credit cards we were when you dropped not only two new chips, but two new MacBooks and a new Mac mini.

I wasn’t ready for any of this.

You weren’t finished there, though, were you? Oh no – next up was an even more surprising release; something we thought had been consigned to the history books; gone the way of the iPod Hi-Fi and 27-inch iMac.

You’ve only gone and brought the HomePod back from the dead, haven’t you? As in the original HomePod which was too expensive, infected with Siri, and ultimately doomed.

What on earth is going on?

What happened to the first HomePod?

The original HomePod was first announced in June 2017. Priced at £319 in the UK and $349 in the US, it immediately became one of the most expensive home assistants on the market.

Apple referred to the first-generation HomePod on its website as the “ultimate music authority”. I have absolutely no idea what that means – and I challenge anyone to decipher it – but as one read through the rest of the landing page for the Siri-powered speaker, Apple’s angle became clearer.

This was a single home speaker (to which you could add another and turn them into a stereo pair) which tuned its sound in real-time, enabling it to adapt to its environment and deliver superior sound and assistance.

During the public unveiling of the HomePod, Phil Schiller suggested that the likes of Sonos and Amazon hadn’t “quite nailed it yet”. Sonos had great sound, he told us, but no intelligence, whereas the Echo sounded poor but had the wisdom of Alexa.

The HomePod was supposed to be the first device to ‘nail it’ by combining those two desirable features.

The initial reviews suggested that it succeeded in one of those areas. The Verge claimed that the HomePod sounded “noticeably richer and fuller than almost every other speaker we’ve tested”. Similar praise emerged from other notable publications and experts.

There were just two problems.

Firstly, the HomePod was far too expensive. Why would anyone spend over £300 if they could pick up an Amazon Echo for £99?

The price may have been more digestible if Siri wasn’t so universally panned – and that was its second problem. Apple’s digital assistant was never a patch on Alexa or any of the devices with ‘Hey Google’ support – and that is still, arguably, the case today.

As a result, the HomePod tanked. There are no firm sales figures to which I can refer, but given that Apple didn’t make a single update to it during its three-year lifespan and officially removed it from the shelves in March 2021, it’s safe to say that Tim wasn’t impressed.

Since that early demise, the HomePod has achieved cult status, with an unexpected surge in used model sales making the headlines last year.

According to Apple, the new HomePod has “breakthrough sound and intelligence”.

That’s right – it’s back. Although, it looks exactly like its doomed forefather. Apple even refers to an “iconic design” which has been tweaked to be slightly lighter, a fraction shorter, and complete with a flatter touch surface on top.

Blink and you’d miss those changes. 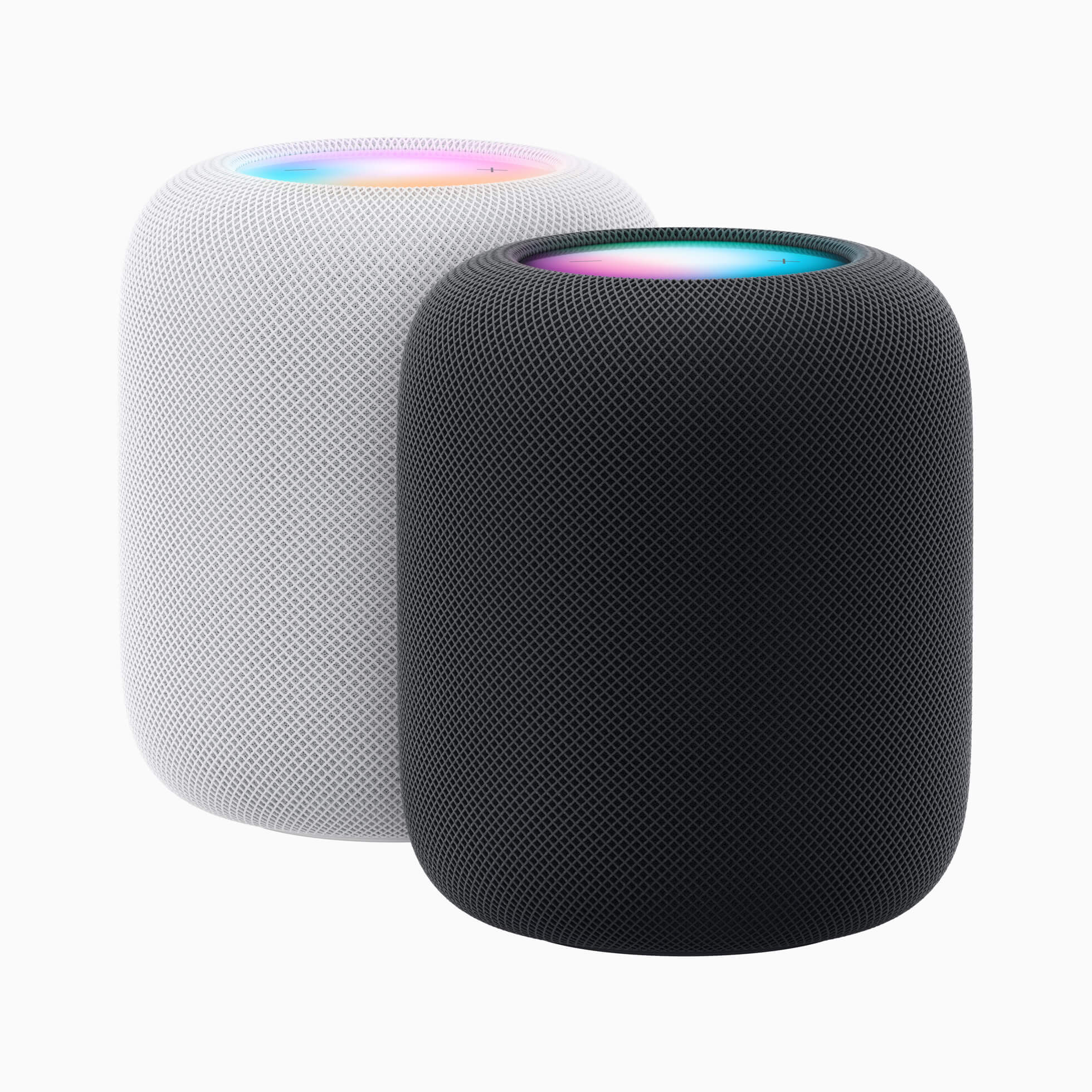 That’s fine. If you can say anything about the original HomePod it’s that design wasn’t one of its downfalls. It always looked handsomely functional and classically Apple.

The HomePod is still available in white but Apple has swapped the space grey option for midnight. Oh, and you get a colour-matched woven power cable, too. Nice.

When it comes to sound, the new HomePod features the same room-sensing technology as its predecessor which enables it to undertake all of that clever real-time tuning wizardry. A new S7 chip is tasked with undertaking that stuff.

Apple’s flagship home speaker still features a high-excursion woofer for those low-end frequencies, but the number of horn-loaded tweeters has been reduced by two to five. There are also fewer mics – six versus the four that came with the original version.

The new HomePod does have a bunch of new sensors, though. The accelerometer remains but is joined by temperature and humidity sensors. That’s neat – and it also explains why one of the actors asks a HomePod for the room temperature in the official video. 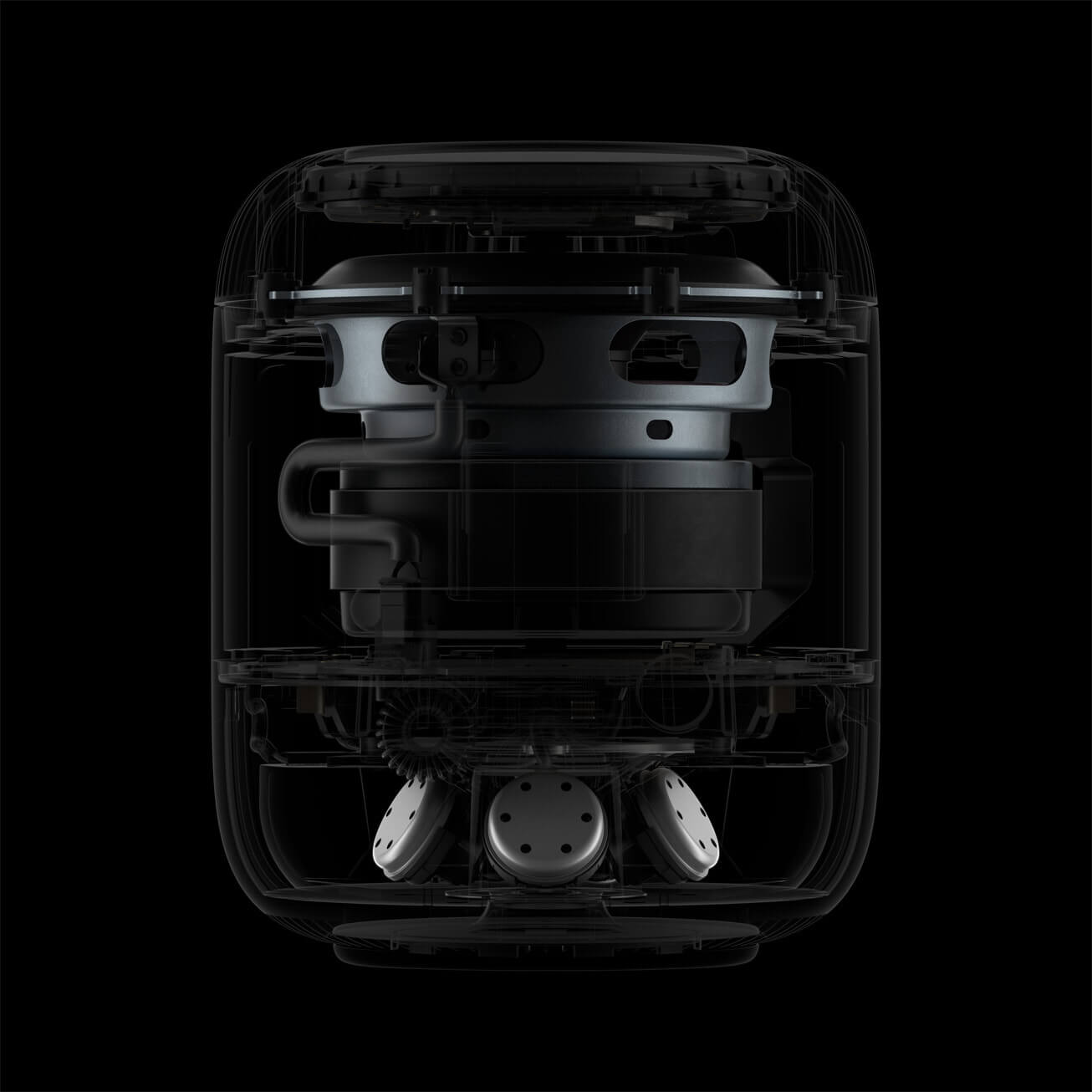 On the subject of assistance, the new HomePod benefits from all of the Apple ecosystem stuff enjoyed by HomePod mini owners. This includes the ability to hand off whatever is being played on an iPhone to the HomePod, recognition for up to six voices, and the ability to use multiple HomePods throughout the home as intercoms.

Why did Apple bring back the HomePod?

“With the popularity of HomePod mini, we’ve seen growing interest in even more powerful acoustics achievable in a larger HomePod,” explains Greg Joswiak, Apple’s senior vice president of Worldwide Marketing. “We’re thrilled to bring the next generation of HomePod to customers around the world.”

Clearly, the success of the HomePod mini has given Apple a renewed thirst for the speaker that started it all.

The challenge they will face is that the HomePod mini has sold acceptably (presumably) because it’s well-priced. The jump from £99 to £299 (even if the latter is a reduction on the original HomePod’s price) is a big one and the new HomePod is still over £100 more expensive than its closest competitor – the Amazon Echo Studio.

Will it sell well? Or will the new HomePod become part of the growing Apple home ecosystem, thus providing an answer for anyone who has the budget and inclination for a larger version of the more affordable HomePod mini?

I’m betting on the latter.

My plan for the new HomePod

I have a HomePod mini, but it has remained stowed away since I moved into my studio. The lack of an exciting sound and the dimwittedness of Siri gives me no reason to unearth it.

However, that’s my only experience with the HomePod. I’ve never been in the same room as the original version, let alone hear one in action. I’ve heard nothing but good things from those who have, which makes me very excited indeed.

At the moment, our house is Amazon Echo-ified. It works. Granted, we only use our Echos to set timers, check whether or not it’ll be raining later, and occasionally find out if <insert name of celebrity> is still alive.

I fancy a change, though. Now that I have a midnight HomePod winging its way to my house in February, I’m going to take the opportunity to swap out all of the Amazon Echo devices for HomePods. The big one will go in the kitchen, and I’ll gradually dot a few HomePod minis around elsewhere.

This will be a challenge. My girlfriend is super comfortable with Alexa and calling out that name is second nature to us both. It’ll take some adjusting to ask for Siri instead and I’m genuinely worried about the Apple assistant’s ability to help us in the same way as Alexa – even if we do have the simplest of use cases!

Stay tuned. This is going to be a very interesting journey.

Join my Substack newsletter for tips on becoming a profitable, happy online creator!