A Week With the Pixel 4a (written by an iPhone Owner)

A Week With the Pixel 4a (written by an iPhone Owner)

With a long year fast drawing to a close, we packed our bags and headed north for Edinburgh. Stopping via The Lakes for a few days en route, this would be the perfect trip during which to test the new Pixel 4a.

Having unboxed it just a few days prior to our departure, I was eager to put Google’s budget smartphone through its paces.

I was particularly eager to get my hands on the device because I’ve spent the last decade using an iPhone. Having flirted only briefly with a Moto G (remember them?!) during that time, I’ve rested solely within the iOS domain for ten years.

That’s a long time. Could the Pixel 4a pull me away from Apple’s ecosystem?

Let’s find out. Welcome to my Pixel 4a review.

I’m not going to dive deeply into the specs or technical performance of the Pixel 4a, because that stuff bores me to tears.

That’s it. I’m not after much with smartphones these days – I’ve realised that.

What follows are my random, relatively unorganised thoughts on how the phone performs and feels from the perspective of a long-term iPhone user.

And I’m not going to beat around the bush; the Pixel 4a is an awesome phone – particularly for the price. The camera knocks the XS Max into a cocked hat, and the size has made me realise how much single-handed phone operation was once taken for granted.

Put it this way: if you’re after a brilliant phone and aren’t fussed about specs, screen sizes and name badges, the Pixel 4a is a total non-brainer (in fact, you may as well stop reading here).

Notch or hole? Which one is worse? (and a note on the fingerprint reader)

The notch on the iPhone attracted lots of attention when it was first introduced. I hated it at first, but it has become nothing more than yet another iconic element of the iPhone’s design ever since; you see it, you know that person has an iPhone. Smart.

It’s big, though, and by comparison, the Pixel’s tiny camera hole located to the top-left of the device is completely unobtrusive. In fact, you barely know it’s there while operating the phone.

It does have one drawback, though, which is the lack of face authentication. I love Face ID on the iPhone; it’s as unobtrusive and invisible as biometric security should be. Fingerprint sensors, aren’t.

That’s what the Pixel relies on, and Google has located the reader on the back of the device. It’s conveniently placed – there’s no doubt about that – but you really do have to train yourself to use it.

It doesn’t feel particularly natural to me. The order in which you use it often addles my brain; I sometimes intrinsically swipe up to unlock the phone and then realise I have to press my finger against the reader to fully unlock it. Of course, you can negate the swipe up by simply reading your finger immediately (I assume this is how Google expects you to do it), but, as I say, that takes some thought.

I also seem to trigger the finger print unlock regularly in my pocket while resting my hand in there, on top of the phone. This, I assume, is happily unlocking the device while it’s in my pocket (although that’s tricky to prove), and occasionally wiping out the number of attempts you’re allowed before passcode entry is forced.

So, I’d take Face ID over this fingerprint reader all day long. But it isn’t enough to justify a massive additional investment in a flagship Apple smartphone, in my book.

Let’s get straight to it – what’s the camera like on the Pixel 4a?

I’m not a fan of cliffhangers, so, here you go: it’s absolutely bloody superb.

Yes, it processes the hell out of some photos in certain conditions. For instance, this shot from the top of Calton Hill in Edinburgh is straight out of the phone with zero edits: 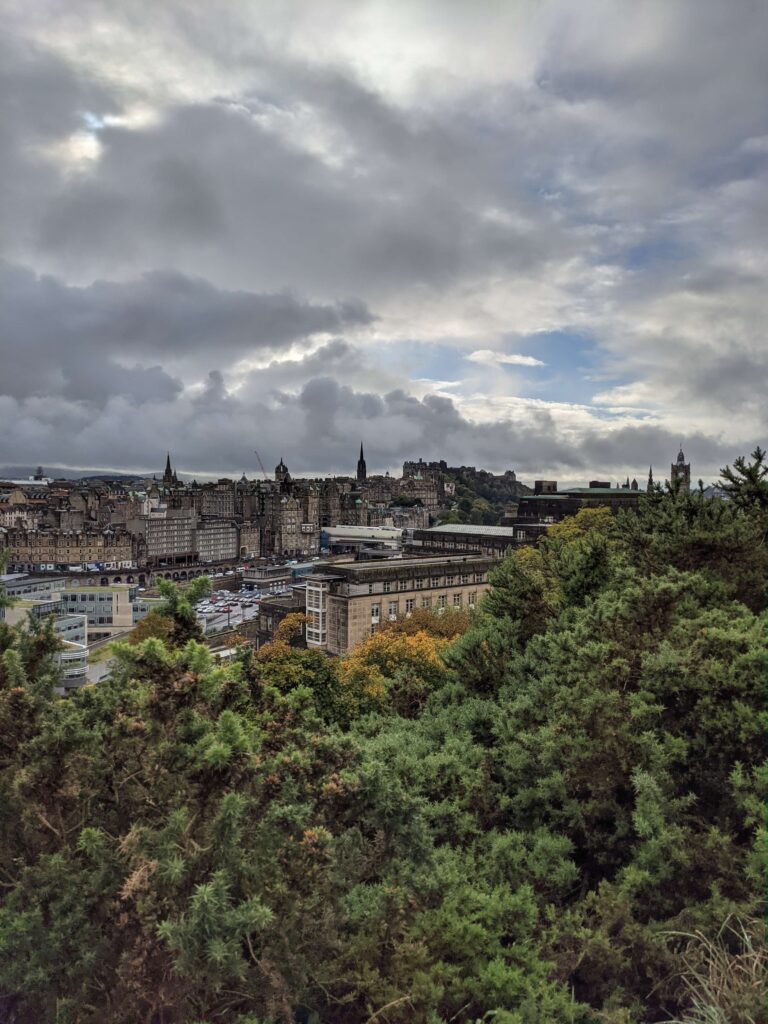 It’s contrasty, sharpened, and has a pretty muted tone. But it does capture the moment rather beautifully. It was windy, overcast and on the brink of a storm up there, and that photo has replicated the ambiance perfectly. It has also done a fabulous job of capturing the beauty of Edinburgh’s varied architecture and scenery.

I love it; both that photo and the camera in general. But I appreciate others may dislike the over-processed nature of Pixel snaps.

The Pixel 4a is clearly slower than the iPhone when it comes to photography, but not in a way which prevents you from capturing the moment. There’s no noticeable shutter lag when pressing the button, because the phone processes the photo once you’re done. By my estimation, most photos take about three to four seconds to process.

Here’s another example, straight out of camera: 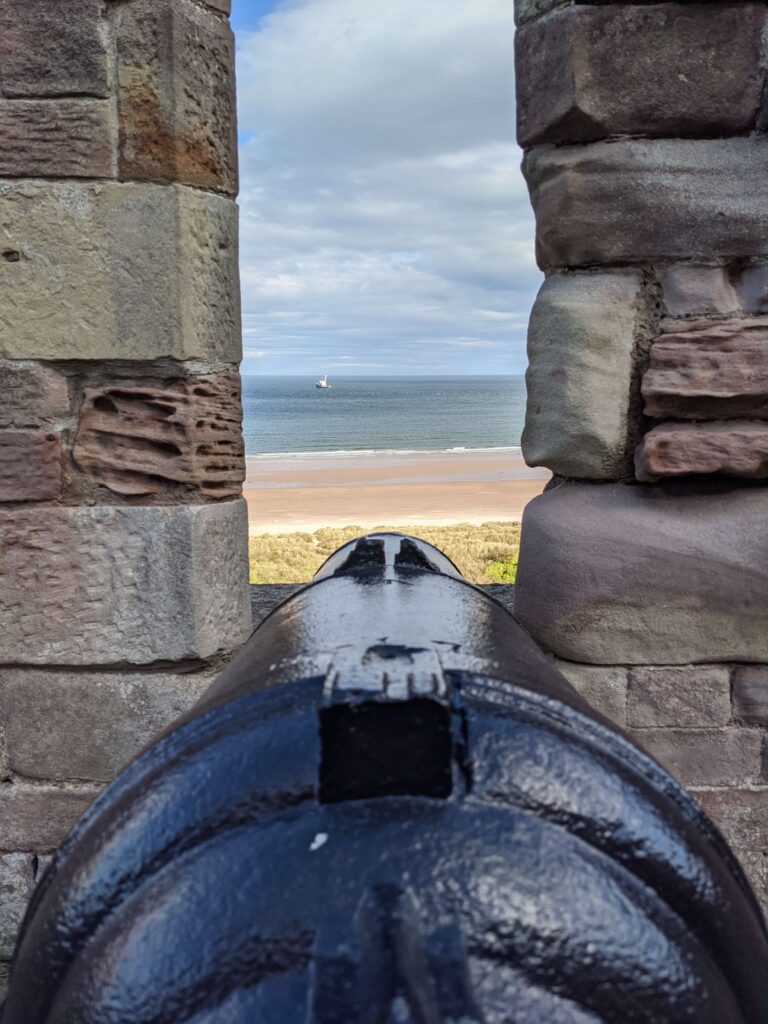 This time taken at Bamburgh Castle on England’s North-East coast, it demonstrates the superb dynamic range of this tiny camera. My Canon 5D mkiii struggled all day with the high-contrast conditions, but the Pixel made mincemeat of them.

To put it into context, the photo above was shot with bright sunlight illuminating the beach and casting dark shadows on the inner walls of the castle. And I really do need to reiterate: I haven’t touched this photo – it’s straight out of the camera.

The colours are beautifully unsaturated, the blacks are where they should be and the canon is shining without an ounce of overexposure. In fact, the exposure is absolutely perfect all round.

I’m deeply impressed, as you can probably tell.

But what about Night Sight?

It’s breathtaking, too. Here’s a tweet from my time in Edinburgh where I compared the iPhone XR to the Pixel 4a:

#Pixel4a Night Sight versus iPhone XR. Latter has no night mode and is an older device but… Well… Look. This is budget phone camera in action and demonstrates just how far we've come. pic.twitter.com/xLtf7OWBk9

Now, I know the XR is an old iPhone by today’s standards, but as noted in my tweet, this really does demonstrate how far we’ve come with smartphone computational photography.

Here’s another stunning example of the Pixel Night Sight processing in action:

No tripod needed, and shakily-handheld after a few beers. Stunning.

Want a cheap phone with an incredibly camera? Get the Pixel 4a; trust me.

How does Android compare to iOS?

Enough camera talk – what’s it like moving to Android from iOS?

Pretty seamless, to be honest. My early memories of Android were sluggish scrolling, unsatisfactory typing and far too many customisable options.

It’s still a highly customisable operating system if you can be bothered, but the sluggishness has gone (this really is a pretty zippy phone), and type felt pleasingly iOS-like (although the ‘revert to misspelt word’ functionality when backspacing after an autocorrection is frustrating).

I don’t rely on a huge number of apps on my iPhone, but the only fear would be losing access to some vital platforms if I continued to use the Pixel as my daily driver. You see, I’m on holiday right now, and therefore I’m not accessing the apps that keep my business running.

So, if you’re reliant on specific iPhone apps, I’d just make sure they’re 100% available on Android before you switch. But don’t let the change of platform put you off, because the way in which you interact with iOS and Android is now spookily similar (and that’s no bad thing).

During the week I’ve been using the Pixel, I’ve made a few observations you might find interesting (iPhone owner or not).

Here they are in completely random, unorganised form:

So – am I switching from iOS to Android?

The Pixel 4a was purchased as a review unit; I wanted to help my YouTube audience make a decision about whether or not it’s worth buying. However, I did secretly go into the testing period wondering if it could tempt me away from iOS.

It’s a crucial time in that respect. As I write, we’re looking forward to Apple’s iPhone 12 reveal event, and I’ll of course be sampling one or two of those devices for the same reason.

The difference here is that one of those iPhones will become – and remain – my daily driver. The Pixel 4a just couldn’t tempt me away, I’m afraid.

It’s not the Pixel’s fault, either (or Google’s); it’s because I’ve realised one simple fact: a large part of the smartphone experience lies in how tied you are to the eco system, and I’m massively tied to Apple.

Here’s why. I rely on the following services, synced across my iPhone, iPad and Macs:

I’ve invested several years in either filling the above with my content or relying on the beauty of Apple’s connected device ecosystem to become more productive. It would make switching to Android a bit of a nightmare – awesome camera or no awesome camera.

It’s why I spent a fair bit of time during my holiday periodically checking my iPhone.

But there’s one other, huge reason I can’t switch wholesale to Android – and it’s far more significant than the above.

I’ve been an Apple Watch user from the start, and the Series 6 represents the most complete version of Apple’s wearable since its launch in 2015.

However, during this holiday, it has served as nothing more than a fitness tracker and, well, a watch. And that’s a shame, because it’s so much more than that when connected to an iPhone.

If you want the definition of ecosystem lock-in, look no further than the Apple Watch/iPhone combo. It’s why Apple will, surely, never enable the Watch to connect to Android devices.

Because, if they did, I’d be sorely tempted to switch to Google’s platform, regardless of the other self-imposed restrictions I’ve noted above. The Pixel 4a is a stonking phone; it has really opened my eyes.