Ever since the M1 MacBook Air came into my life, the largest version of the iPad has rested on my desk, unused.

That’s a lot of money and tech to be sitting unloved without any meaningful place in my life.

It’s a problem that has been compounded by my purchase of the brilliant iPad Air. As I noted recently, this is the only iPad I can recommend these days. When it comes to sheer bang-for-buck, there’s nothing like it, and, unless you want that huge 12.9” screen, there’s no reason to opt for the iPad Pro over the Air.

So, what to do with my big and still powerful iPad?

Well, I have some good news: one relatively small purchase has brought it back to life.

Before I reveal my 12.9” iPad Pro’s saviour, let’s address the elephant in the room.

When you’re using it as a laptop replacement, this isn’t an issue; if anything, it’s the tablet’s biggest benefit. And, indeed, that’s what I was doing for quite a while before the M1 MacBook Air entered my life.

When we were allowed to head out to coffee shops and work somewhere other than our spare rooms and kitchen tables, the 12.9” iPad Pro would come with me. It was a constant companion on the road.

Paired with the brilliant-but-expensive Magic Keyboard case and trackpad support in iPadOS, I could get most of my writing work done without the need for a laptop.

Apple then ruined everything by launching the M1 chip, making it amazing and placing it in their best laptop.

This rendered both my big iPad and its pricey keyboard case almost useless. Suddenly, I had no reason to use Apple’s largest tablet.

This is, I suspect, its Achilles heel. As great as the 12.9” can be as a potential laptop replacement, its huge form factor makes it rather unwieldy for everyday tablet use. Certainly, if you want an iPad on which to watch YouTube, browse the internet and read the occasional news story, you’ll find the 12.9” version a proper handful.

So, what do you do with all of that screen real estate if you can’t think of anything worse than selling your beloved massive iPad? 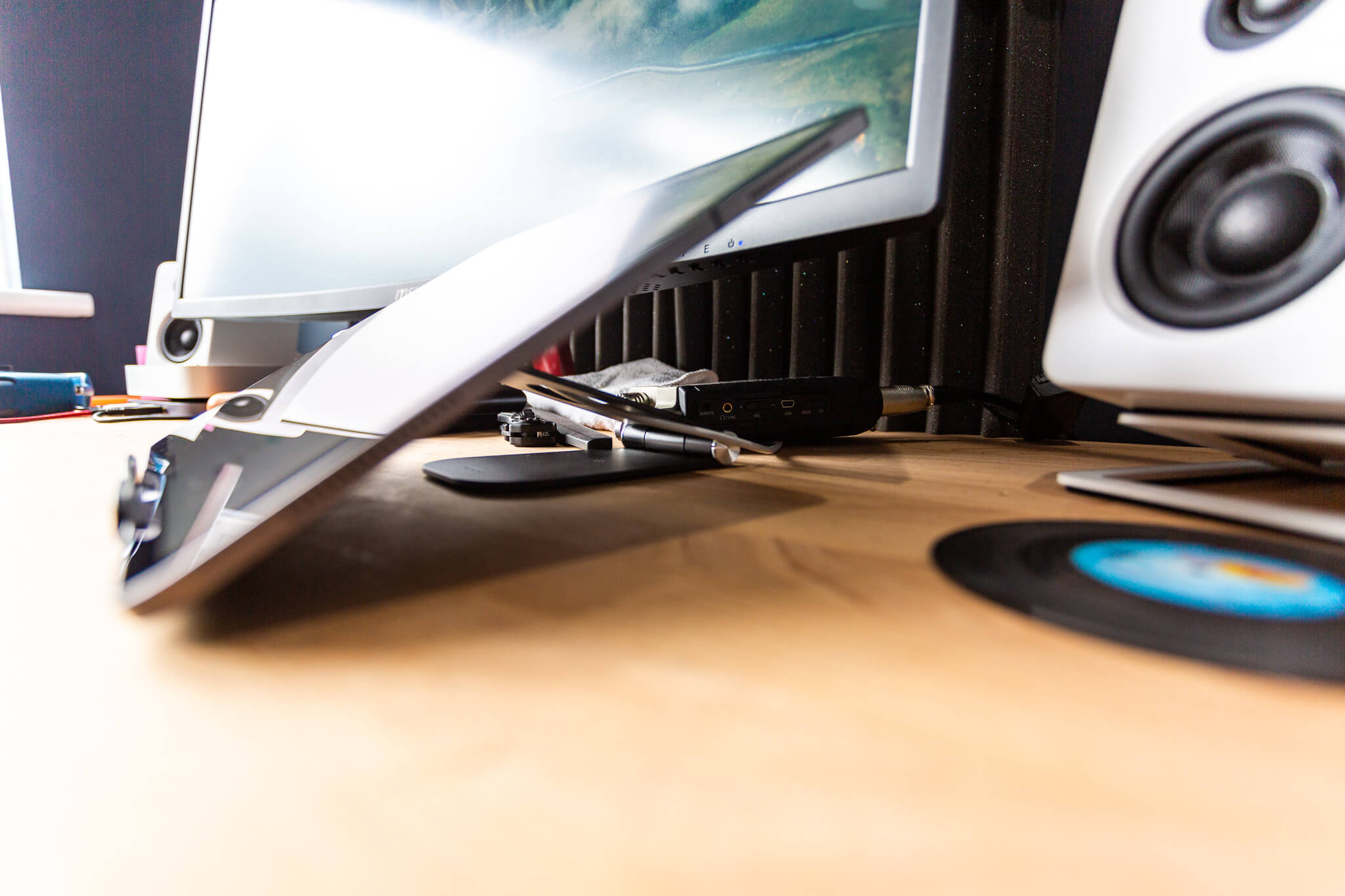 I’m a bit obsessed with other people’s desk setups. This has prompted me to follow a number of Instagram accounts where you’re encouraged to “rate this setup” and “like if you love this space” for a daily stream of incredible home offices.

They’re all wonderful and make you feel rather inadequate.

By comparison, the desk in my studio is a mess. It’s an inevitability if you’re a busy content creator; there’s always stuff everywhere (which is conspicuous by its absence in YouTube videos and thumbnails – sometimes).

It struck me recently that one of the most common features of the desk setups I lusted after on Instagram was some form of iPad integration. Unlike mine, these people had created a semi-permanent home for their iPad, and it looked genuinely useful.

By comparison, my iPad would either reside vertically in my vertical laptop stand, waiting to be used or simply placed haphazardly on the desk not being used.

Everyone else seemed to have their iPad set up as a separate screen and it looked like they were doing cool stuff with it.

So, I headed to Amazon, found the OMOTON iPad stand and came up with the brilliant idea of using it to bring my 12.9” iPad Pro back to life.

The OMOTON is a completely collapsable iPad stand that is designed to hold your tablet at pretty much any angle you wish. Unlike many iPad stands which are usually fixed at a certain height, you can fold the OMOTON as low as you wish for the smallest of inclines.

This is perfect if, like me, you want to position the iPad just beneath your monitor without obscuring the screen. Fine adjustments to the OMOTON’s angle can be made and its hinges are strong enough to remain stable at any angle, no matter how hard you bash the iPad’s screen.

The OMOTON supports every sized iPad, but would also work well for Samsung tablets, e-readers, Kindles, and any other touchscreen device that doesn’t feature its own hinge.

It’s tiny, too, and would therefore be the perfect travel companion if you want the same level of tablet flexibility while out on the road. A hole at the back through which you can thread a power supply or USB cable completes a really neat little package. 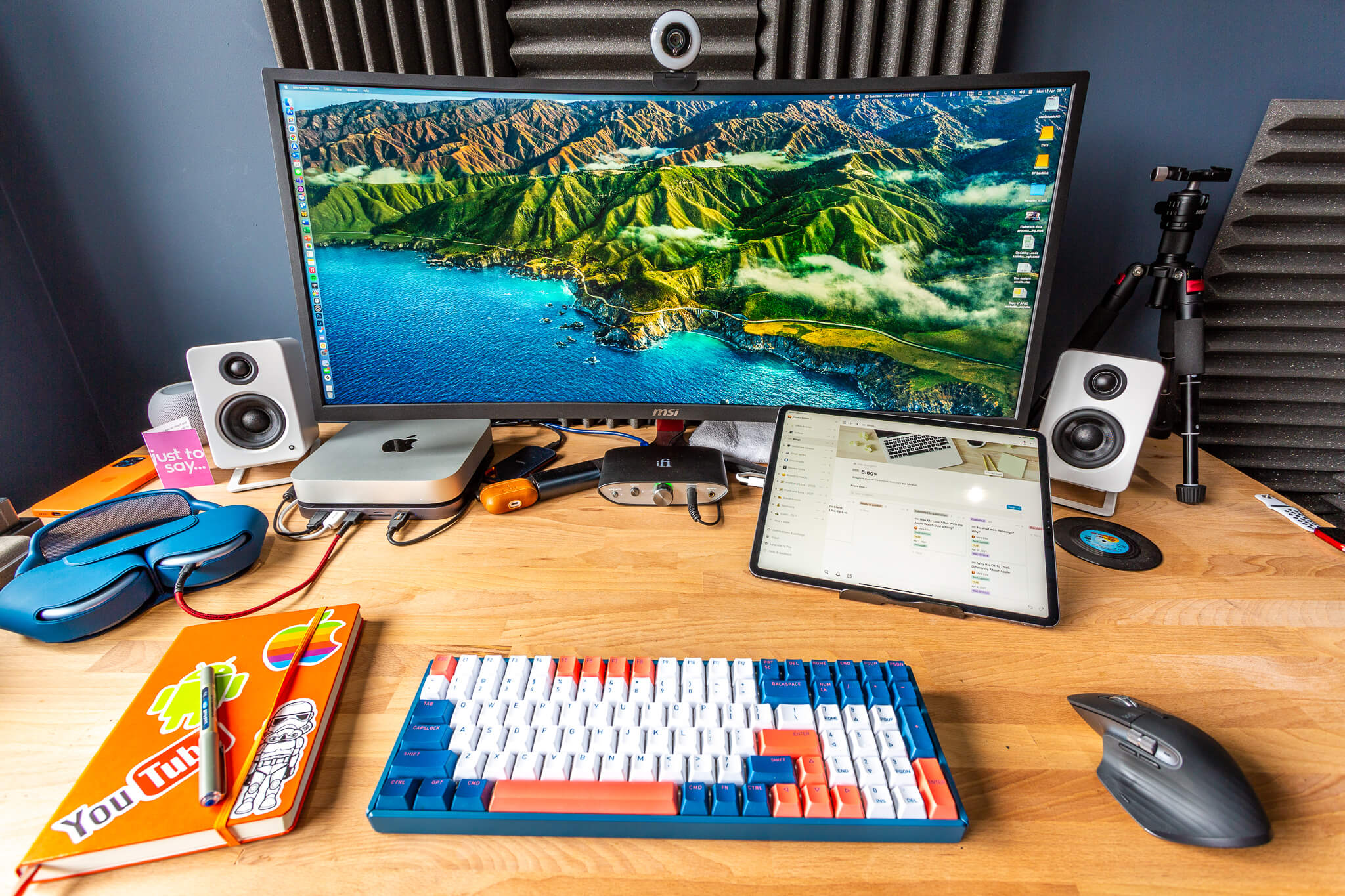 I’m running a huge 34” widescreen monitor, but even with all of that screen real estate, a second screen is sometimes desirable.

The OMOTON case has enabled me to add an additional screen to my M1 Mac mini setup. The 12.9” iPad Pro is perfect for this. When ‘docked’ in this way, its size becomes a benefit, and that large, beautiful retina screen an absolute joy to use.

You can use it in this configuration as a literal additional screen for your Mac via the brilliant Sidecar feature but, thus far, I’ve been more inclined to use it as an iPad. I simply keep apps open that are of benefit to me when visible permanently, without having to switch windows or layering them side-by-side on the Mac.

For my workflow, having the likes of Notion, Trello and Fantastical ever-present on my desk via a touch screen interface is fantastic. It has brought the 12.9” iPad Pro back to life for me, even if that means it’ll rarely if ever be removed from its new home just beneath my MSI monitor.

Are you using your 12.9” iPad Pro in a similar way? I love to hear how others are implementing Apple’s largest tablet into their daily lives. Let me know in the comments if you’ve adopted a similar approach, or if there’s an even better way of putting these brilliant but troublesome large-screen iPads to use.