My thoughts about the M1 iPad Pro aside, I’ve always been a huge fan of Apple’s tablet.

I bought the first one in 2010 and subsequently fended off the inevitable “haha, why have you bought that massive iPhone?” mockery that followed.

I’m glad I did, because regardless of iPadOS’ continued shortcomings in the pro department, the device itself is a brilliant tool. But what makes it even more brilliant is the stuff you add to it.

Over the last few years, I’ve settled on a few iPad Pro accessories that work perfectly for me, and I’d like to share them with you today. The good news? You don’t need an iPad Pro for any of them – most are compatible with the entire range. 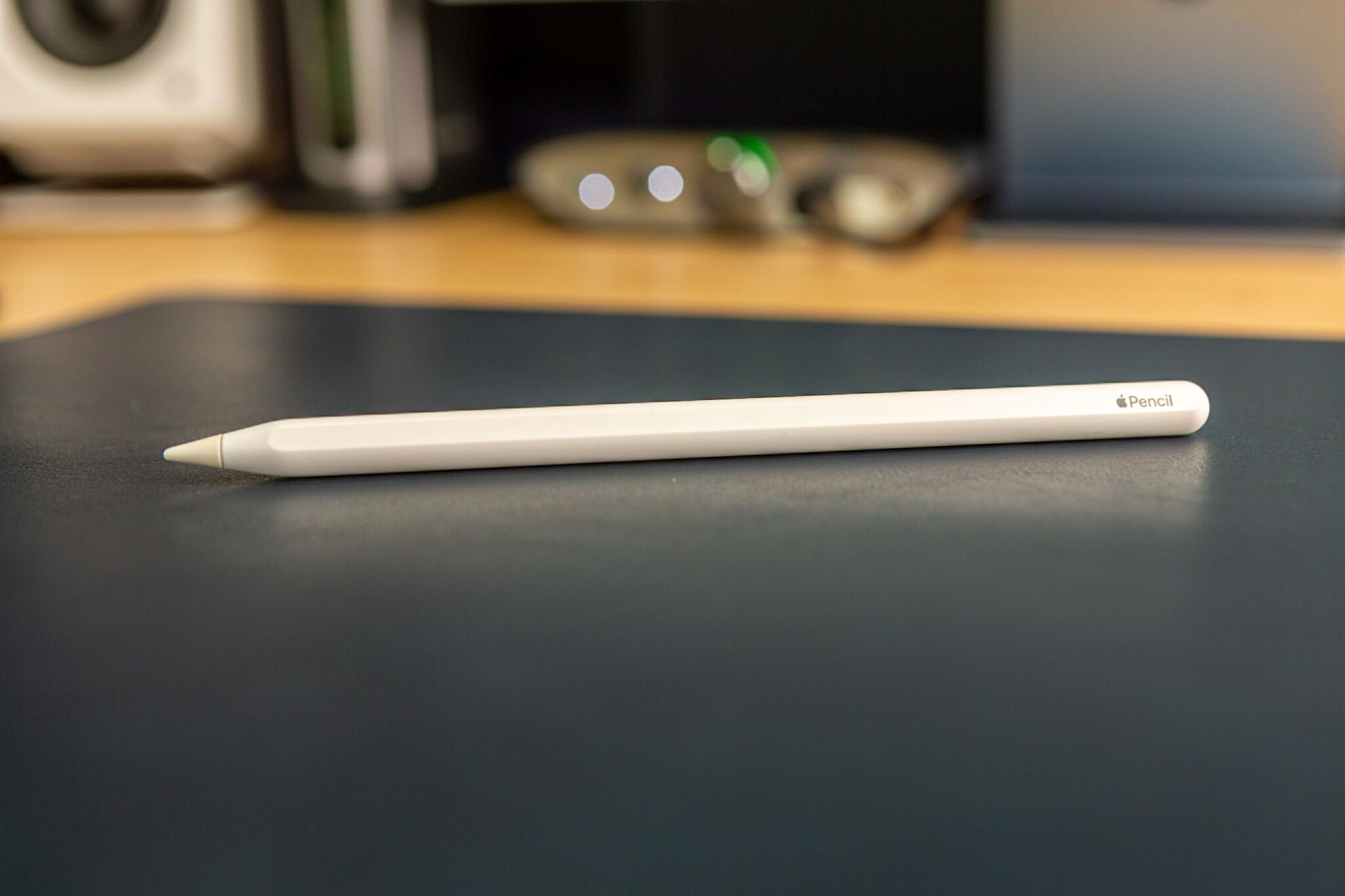 Remember the first Apple Pencil? It was an undoubtedly cool way to interact with the iPad and turn it into a digital note-taking device or sketch pad, but it was also biblically silly.

Mine would roll off the flattest of surfaces. It was also unnervingly long and had just about the daftest charging requirement I’ve experienced in tech. To juice up your first-gen Apple Pencil, you had to pop off a small cap (which you’d inevitably lose) to reveal a lightning connector that would attach to the iPad’s lightning port. This rendered both the Apple Pencil and iPad useless while the former was charging (unless you fancied using the latter with a long white thing sticking out of it, which no one did).

Thankfully, Apple decided to start afresh with the second-generation Apple Pencil, and what they settled on is damn near perfect.

There’s now a ridge to stop the thing rolling off every available surface. It’s the right length now, too, and the shift to more of a matt finish makes it far more pleasurable to hold. Sure, I only use mine for editing photos in Lightroom, and it remains priced as only Apple could price a stylus, but it’s worth the investment. 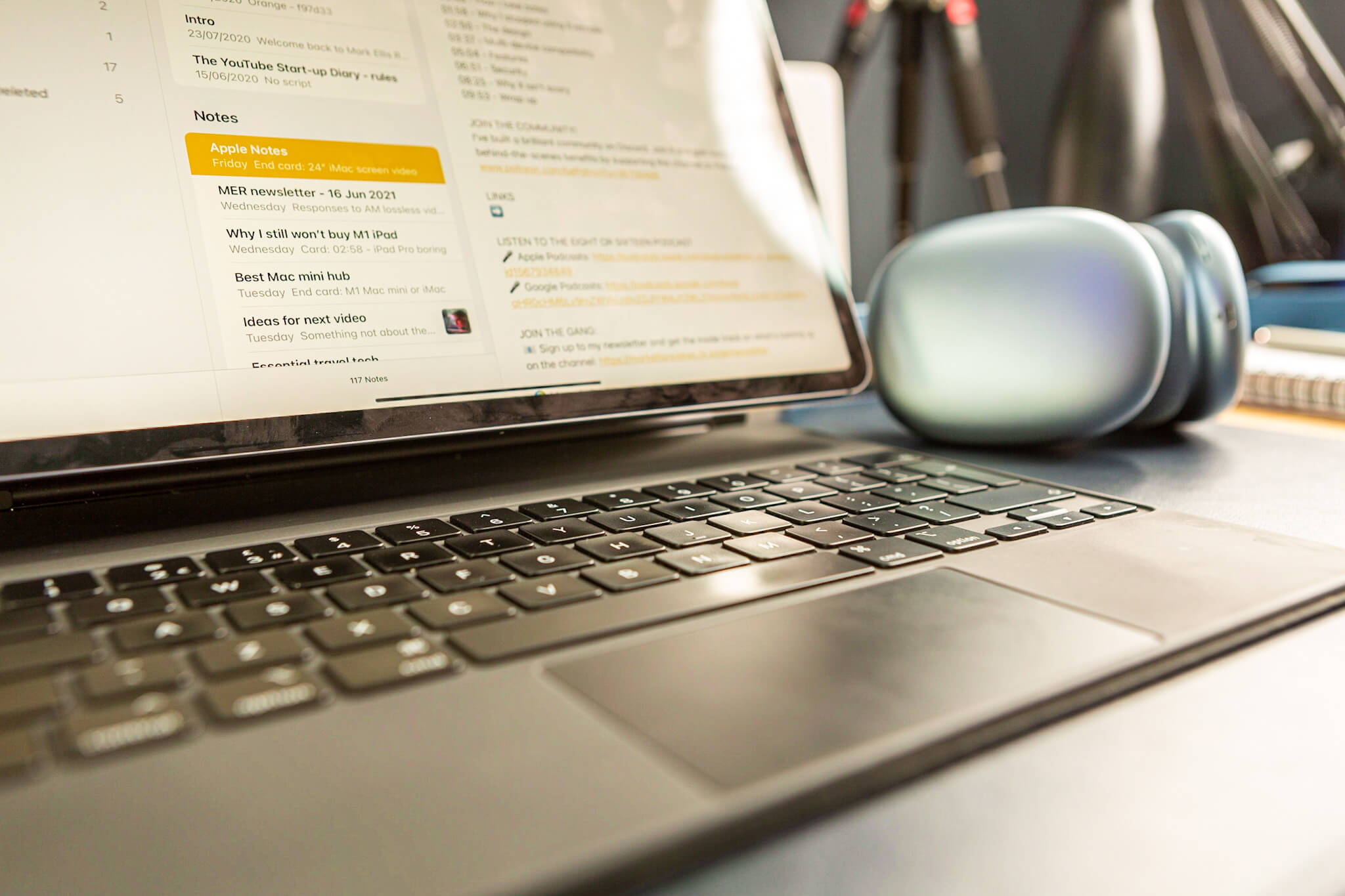 Beyond photo editing, I also use my iPad Pro as a writing tool occasionally, and for that task, I’ve found no better tool than the Magic Keyboard.

However, it is tricky to ignore its flaws. The Magic Keyboard case for the iPad Pro is astronomically expensive. Stupidly so, to be honest; if you add it to the purchase price of a new iPad, you’re well into expensive laptop territory.

It’s also made of a pretty unsatisfying material that scuffs and marks like no other piece of tech I’ve owned. Oh, and there’s the lack of function keys and the fact that it adds serious weight to the iPad, too.

But I can’t stop using it. As usual, Apple has made this particular accessory an absolute breeze to use; there’s no faffing around with Bluetooth and the use of magnets is, as always, ingenious. I also enjoy the typing experience on the relatively low-travel keyboard, despite my newfound love for mechanical keyboards.

If you’re a business user, it’s an absolute no brainer as an investment in iPad productivity. If you’re a home user with the budget for it and treat your iPad as the main computing device, it’s worth it – despite those flaws. 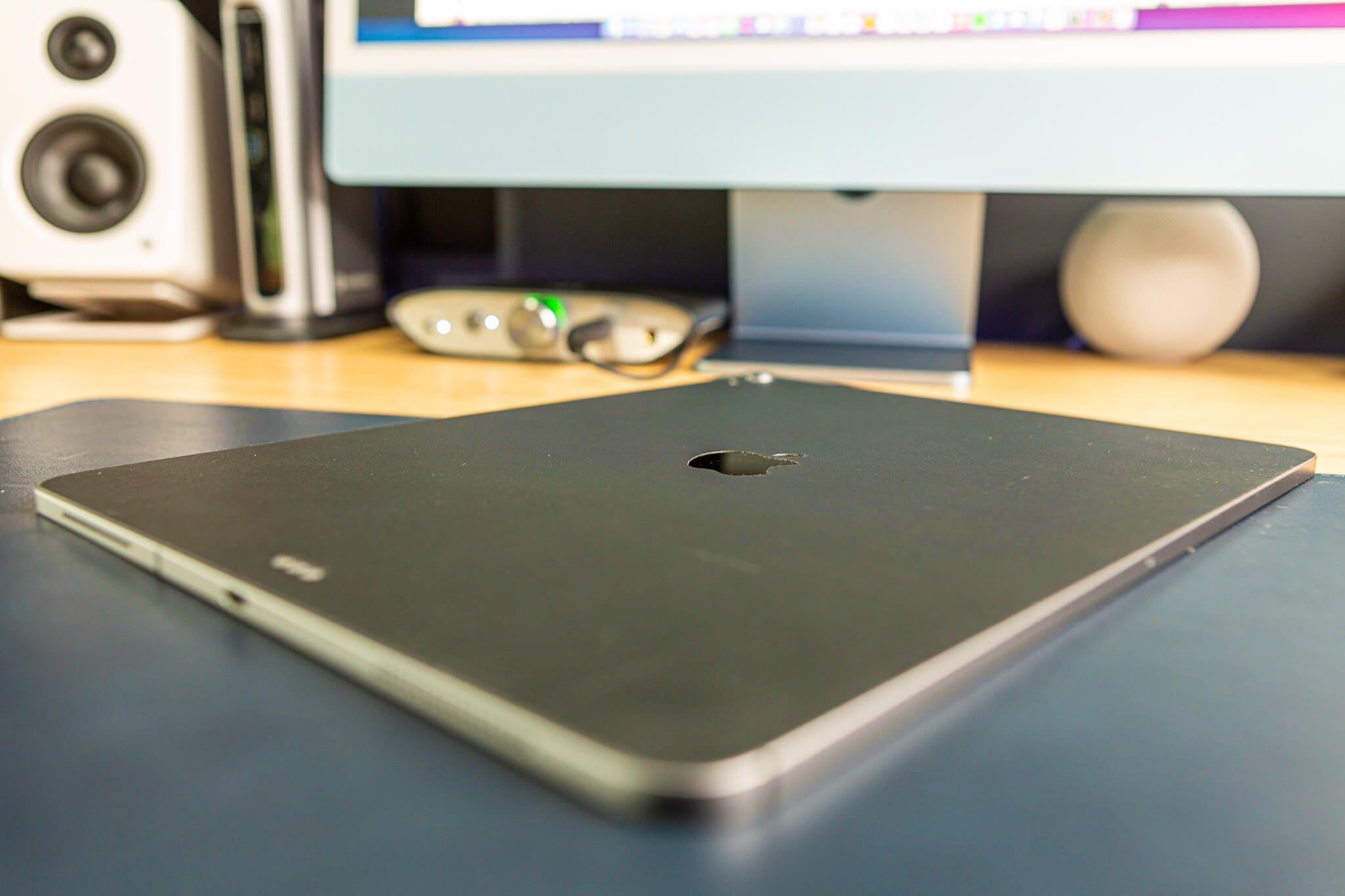 I look after my tech – which makes it all the more frustrating when I inadvertently damage it.

I’ve always been particularly precious of my iPads because the copious amounts of exposed glass and aluminium (and the sheer surface area of the 12.9” device in particular) just look like prime candidates for scratches and scuffs.

The problem is that I also like my tech naked. I’ve never been a fan of adding heavy cases to Apple gear. It’s why I remove the iPad Pro from the Magic Keyboard when I don’t need that particular accessory.

But it’s also why I added a dbrand skin to my iPad Pro.

I opted for the rear skin in matte black. It was super-easy to apply and adds no meaningful weight to the tablet at all. More importantly, it means I can place my iPad on any surface without worrying about it. I like that. 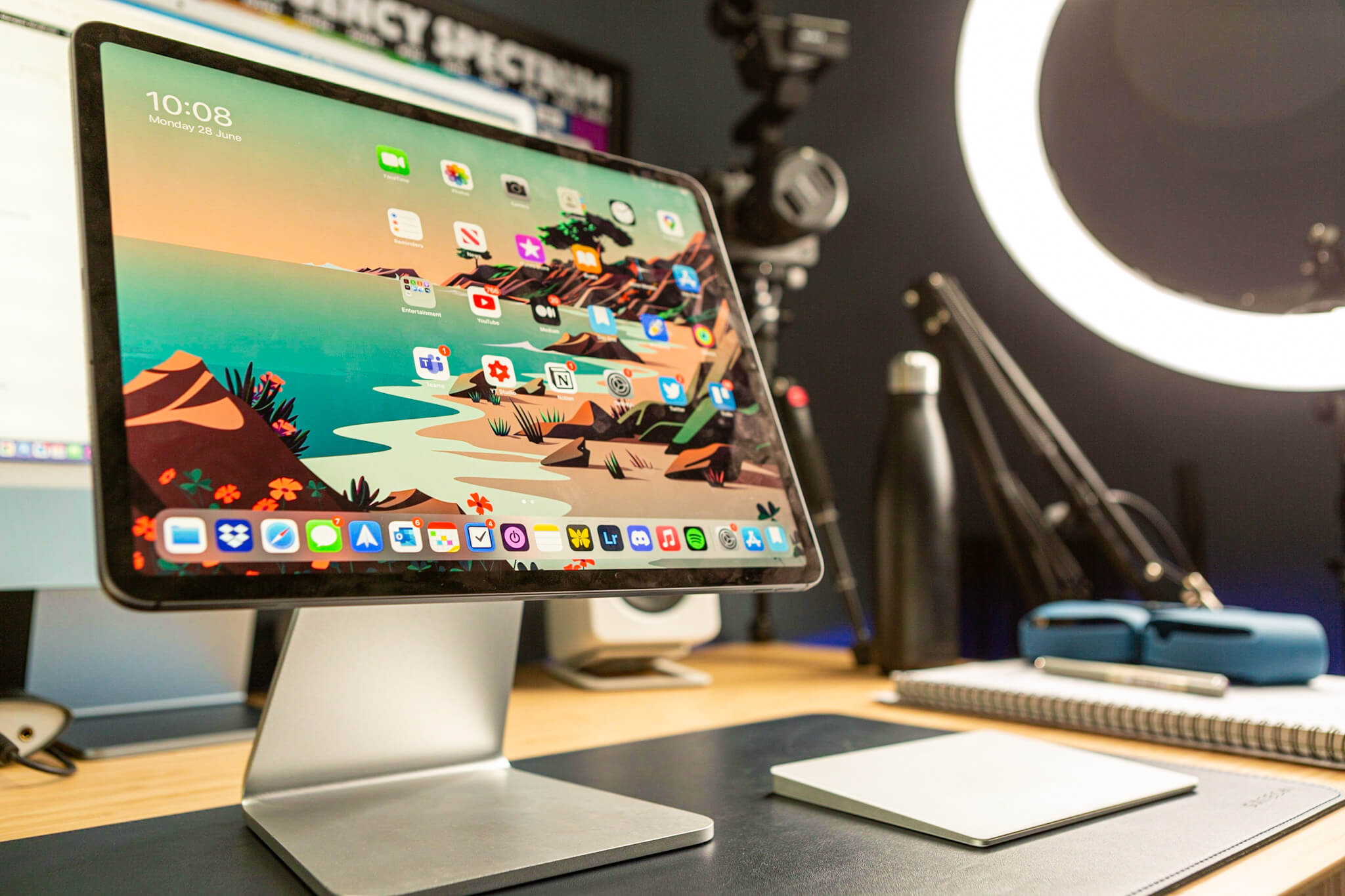 I’ve tested a whole bunch of stands for the iPad, and some have been so good, they’ve completely rejuvenated my love for the device.

However, sometimes, I just want to operate my iPad as though it were a desktop machine. This sounds a bit odd, granted, but when you first attach an iPad to the Lululook stand, you enter a new world.

Relying on a magnetic connection to your iPad, the Lululook stand is made from aluminium and has a very satisfying hinge. It looks almost iMac-like when set up and offers loads of tilt-ability, depending on how you use your iPad.

It has proved immensely useful of late, whether it be as a convenient way to use the iPad in Sidecar mode for macOS, or as a way to lift the iPad to a more comfortable height during family FaceTime calls.

I wish the magnets were a little stronger, but that’s a small gripe. This is a brilliant, attractive iPad stand that’ll be of particular interest to anyone who uses their iPad as a desktop computer. 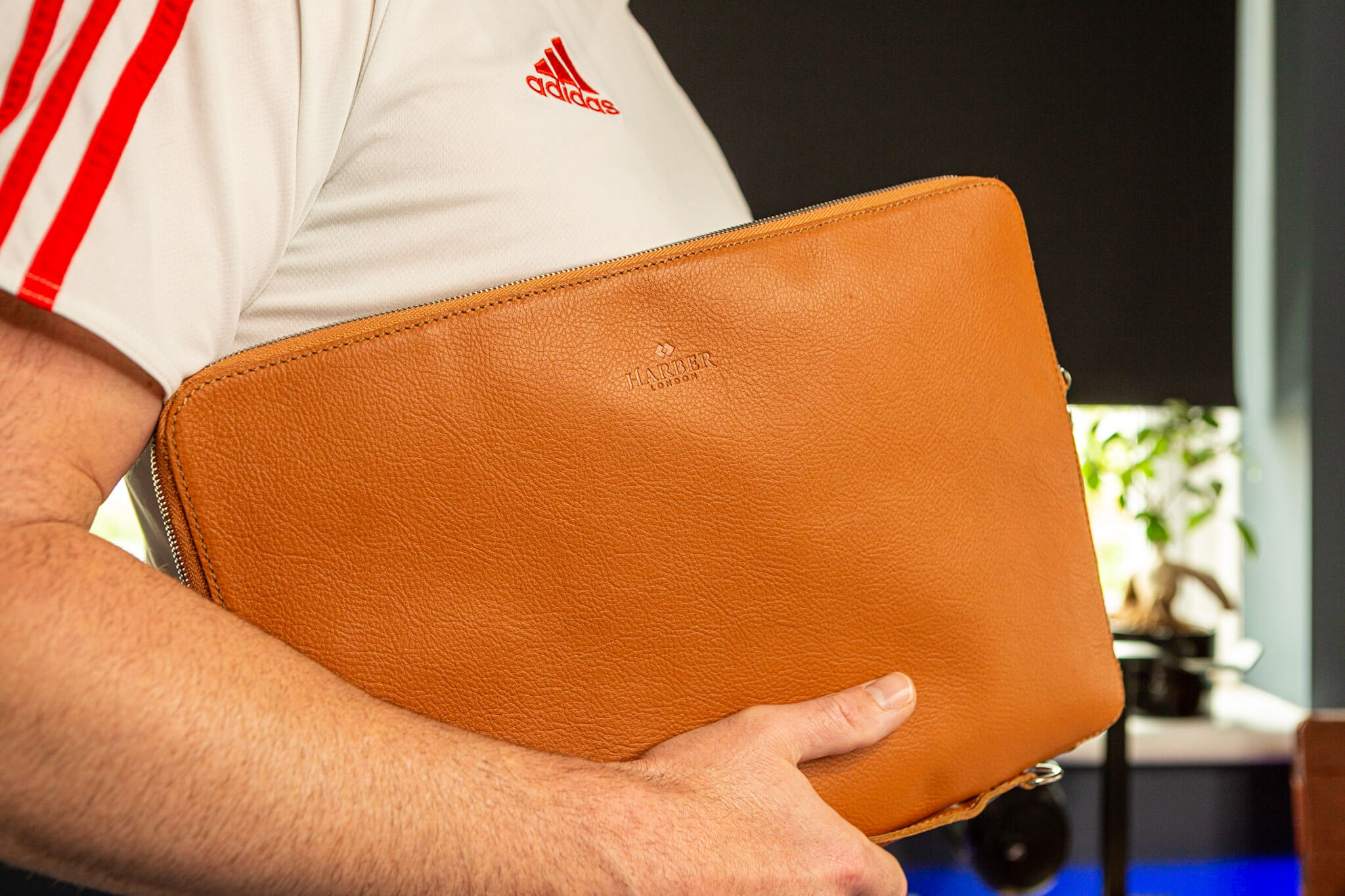 The last item on my list won’t be for everyone. It’s also embarrassingly luxurious for what is ostensibly a sleeve case for your iPad and some other bits.

The Harber London Nomad organiser is £299. Mine was very kindly sent to me by Harber to review, and hands on the table – I thought I was going to hate it.

As it turns out, it’s really rather nice and I’m finding myself using it far more than expected. Harber is a UK-based firm that specialises in leather goods of all kinds from wallets to Apple Watch straps. They use high-quality leather and everything has a pleasingly hand-made quality to it.

The Nomad organiser is designed to help you carry your iPad and all of the other little bits and bobs that help you get your work done. In mine, I’ve placed charging cables, a Field Notes pad, various pens, an SD card reader and an AirTag (just in case).

It’ll happily keep a MacBook safe, too (in fact, you can fit both an iPad and a MacBook in there, comfortably).

If you like leather goods and prefer the idea of travelling light, rather than lugging a big backpack everywhere, the Nomad organiser is probably one of the best ways to treat yourself. And, if the price made you throw up a little bit in your mouth, there are a tonne of cheaper alternatives on Amazon.

I hope you’ve found this list helpful. I’m always trying out new accessories for the iPad, so I’ll check in again soon with anything else that I find of interest. But, in the meantime, let me know your iPad accessory picks in the comments!