Widgets have featured a fair amount in the Eight or Sixteen podcast, but not in the most glowing of terms.

It isn’t because Rob and I dislike them – quite the opposite in fact – more the fear that Apple appears to be focusing on transferring iOS features to iPadOS, rather than enabling the latter to finally make use of the iPad’s latent horsepower.

But that’s for another day. Today, I want to give my widgets some love.

Stop laughing at the back.

How I use widgets

I’m not a huge widgets user. Like most people, when they were finally made available for the iPhone’s home screen in iOS 14, I spent rather too long squeezing as many as I could onto every single app page.

This isn’t a good idea. Firstly, it means you need to interact with Jiggle Mode, which is the worst piece of software configuration design I have ever had the misfortune to use. Secondly, it means you lose important screen real estate that’s better tasked with containing the apps to which you need regular access.

It took me a while to work out that widgets need their own space, away from your apps. And that’s why I now have just two pages of widgets which are a couple of swipes away. For me, it works brilliantly.

As I noted a little while ago – it’s hard to get excited about a calendar app, but Fantastical remains one of those apps I can’t imagine replacing any time soon. It is damn near perfect.

As usual, the team behind Fantastical, Flexibits, has grabbed this iOS functionality with both hands and made superb use of it.

I’ve opted for the double-height, full-width version of their widget which features a great big number for the date to the left, nestled beneath the month and day. I don’t need multiple reminders of where I am, date-wise, but it just looks nice.

To the right, there’s space for a couple of upcoming events (I exclude tasks, for reasons that’ll become evident in a moment) and a button to create a new event.

Oh, and the weather is at the top-right, too.

It’s so thoughtfully designed and somehow uncluttered. Keep smashing it out of the park please, Flexibits.

Oh, how I love Things.

I’ve got a memory like a sieve, which is why I rely so heavily on my to-do list. I can’t deal with pen and paper for this, either, because it’s vital that my to-do list travels with me everywhere.

I’m yet to find a to-do list app that works as well for me as Things. More importantly, I don’t think there’s one that is as beautifully designed or thought out as Things, either. It’s a masterclass in user experience.

Their iOS widget is equally pleasing. Just like Fantastical, I’ve opted for the double-height version which packs in my next four tasks for the day and a button to create a new one. Tapping any of the to-do items in the list takes you straight into Things and identifies it with a brief but noticeable highlight.

The Things widget is nicely configurable, too. You can change the list it displays and filter by tags. Again, we need no more customisation than that.

Without Notion, this blog would probably never have made it onto this page. It really is that big a deal for my business.

Again, this all stems from my brain’s inability to retain anything but the most useless of information (did you know that they mixed the Billie Jean drum track 91 times, only to eventually revert to the first version?). With Notion, all of my content plans, review unit information and goals are contained within one place.

The Notion widget is about as simple as they come, but a great example of how these little boxes can be used for quick shortcuts. I’ve simply set mine to display the last three most recent items I’ve interacted with. Because that’s all I need.

I love a podcast. These days, I think I listen to more podcasts than I do music – particularly while out walking the dog or running. And they’re not even in Dobbly Atmos.

Just like the Notion widget, my configuration for the Apple Podcast widget is about as simple as it gets. Set to double height, it simply displays the last two podcasts I’ve been listening to, so I can quickly jump in and finish them off.

It’s a shortcut – nothing more. But anyone who has used Apple’s native podcast app will know that it’s not exactly their finest hour, therefore any help in navigating its confusing user interface is welcome (and yes, I have tried Overcast – maybe I’ll head back that way soon).

I have no idea how iOS chooses the featured photos in the ‘For You’ section of the Photos app, but there’s definitely some pretty intelligent programming going on.

It always surfaces lovely photos. In fact, it resurrects photos I’d totally forgotten about and, often, cannot remember taking. Whether it’s a perfectly captured family moment, golden hour seascape or yet another dog photo, they’re a joy to flick through. 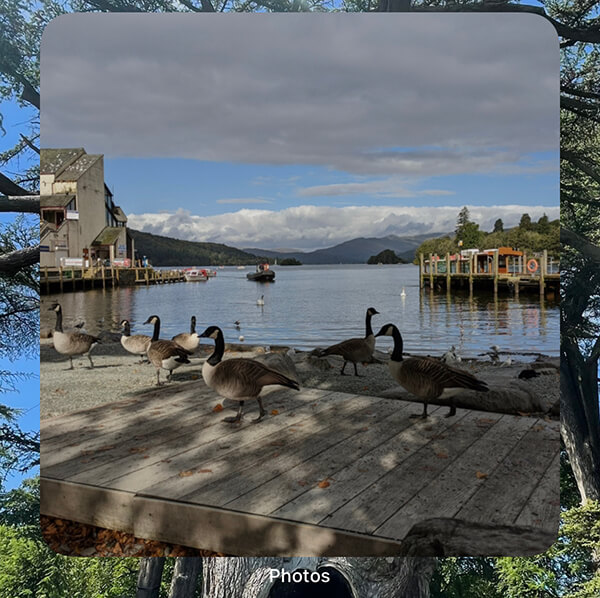 This is why I’ve chosen the biggest Photos widget available. With a couple of swipes from the right of my iPhone’s home screen, I’m immediately presented with a photo that puts a smile on my face and lifts my spirits if I’ve had a rough week. No other app or widget I have is capable of doing that.

Got a favourite widget? Get involved in the comments and let me know what it is and how you’ve implemented it!