If you’re about to start a YouTube channel – a word of warning: it’s incredibly easy to overspend on kit.

This is particularly the case if, like me, you love your gear and have a particular affection for, say, cameras and lenses.

If you fall into the same camp and don’t have a huge budget, that means some restraint is required if you’re to put together a YouTube setup that doesn’t cost the earth and from which it takes forever to see any form of return on investment.

I’m going to attempt to prove the value of that restraint by revealing the five most important pieces of kit I rely on to create my videos. This isn’t an exhaustive list, and as you’re about to discover, it’s a bit of a mixed bag when it comes to budget versus the higher end.

But it works for me, and it might give you some inspiration. 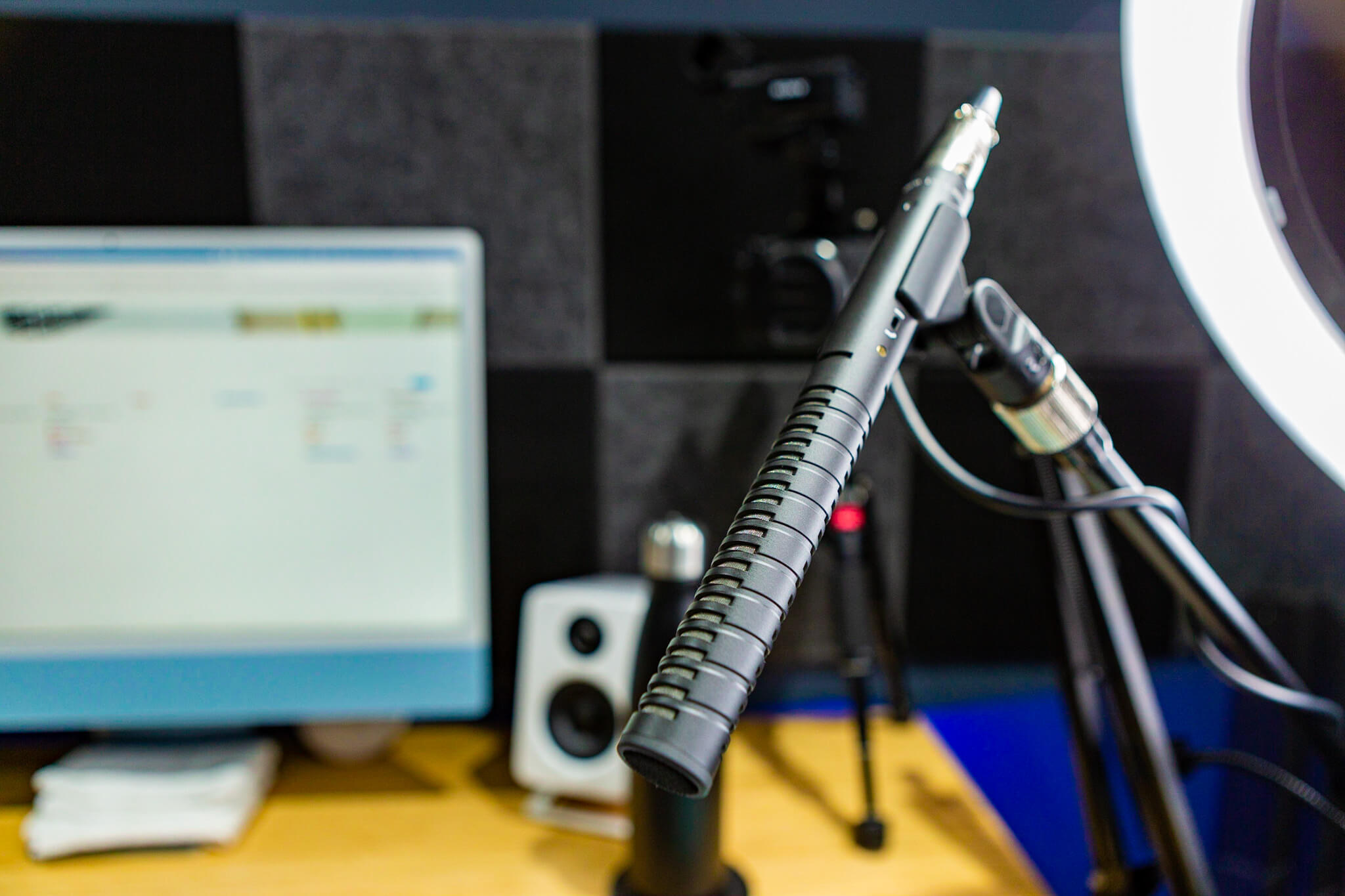 I’m listing this first because while you can just about get away with fairly iffy video quality on YouTube, your audio needs to be on point.

People will probably watch a video shot on your smartphone, but they’ll turn off pretty quickly if they can’t hear what you’re saying.

It’s why, when people ask me what they should buy first for their YouTube channel, I always say “get the best mic you can afford”.

My mic of choice is the RØDE NTG1 Condenser Shotgun Microphone. It’s not the cheapest option, but I cannot recommend it highly enough if you have a bit of cash to spend and fancy going straight into the shotgun game (which I highly recommend).

Check out the video below to find out more about my audio setup and how I achieve my sound with this mic (and some secret sauce).

If your budget is smaller, I recommend the RØDE Smartlav+ Lavalier Microphone. 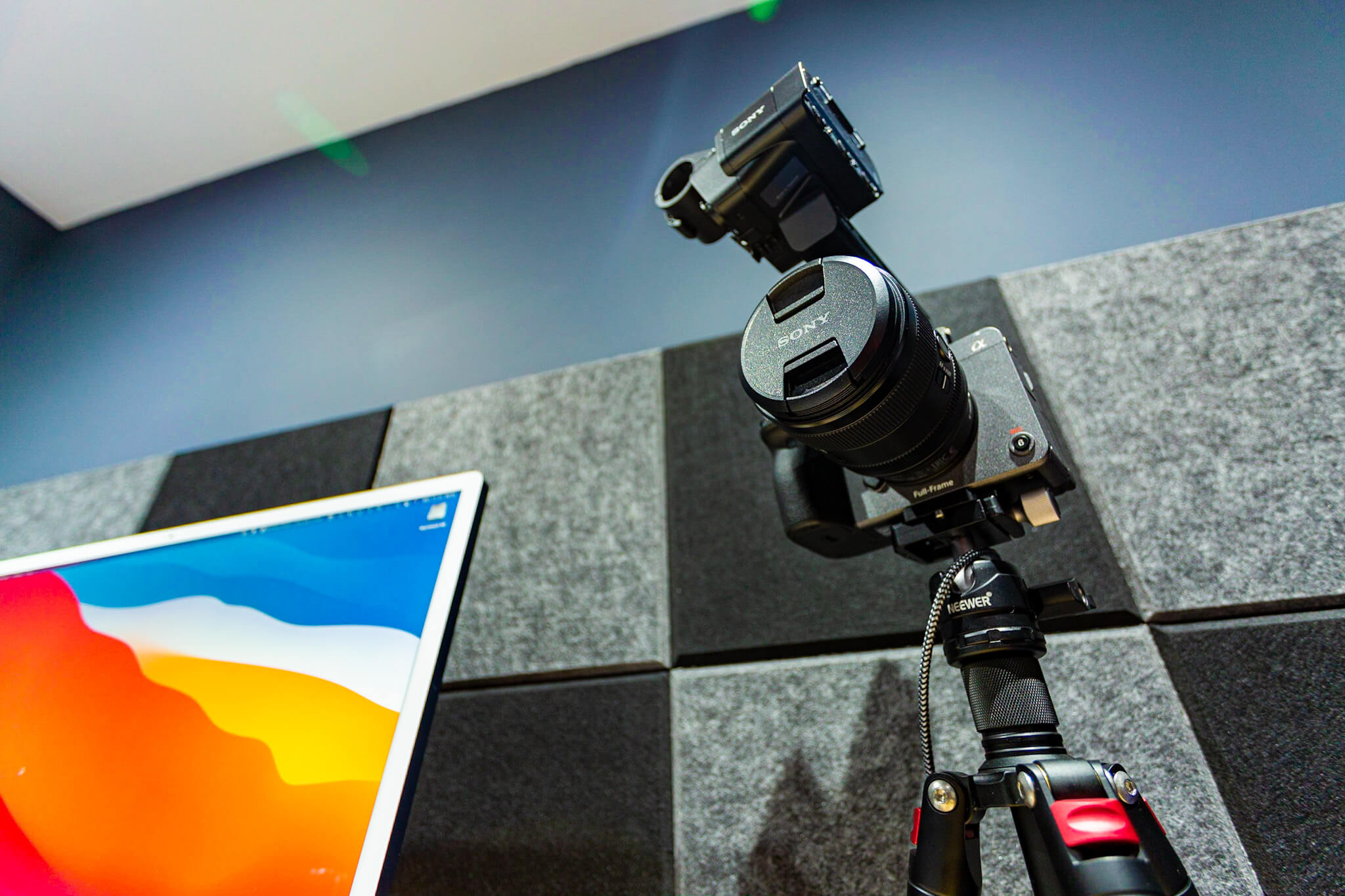 I undertook a big studio upgrade recently in the form of my camera, and it was one of the best investments I’ve made into the channel.

However, I made around 80 videos before I upgraded from what I already had.

This is the best advice I can offer when it comes to the camera for your YouTube channel: use what you have. If that’s an old DSLR, or your iPhone – it’ll do. Trust me. The first few videos I made for Mark Ellis Reviews were shot in 1080p on an ageing Canon 5D MkIII. I then switched to 4K on my Sony A7S ii, which I’d also owned for quite some time.

Neither of these cameras had decent autofocus, which meant I needed to self-focus myself before each video (which I’d often screw up). They both had recording limits of around 25-minutes, too, which was an absolute pain in the arse.

But they worked and they helped me build a channel that attracted one million views in just eight months. When the time was right, I moved to a brand-new Sony FX3 which has revolutionised my production workflow.

Patience is a virtue. 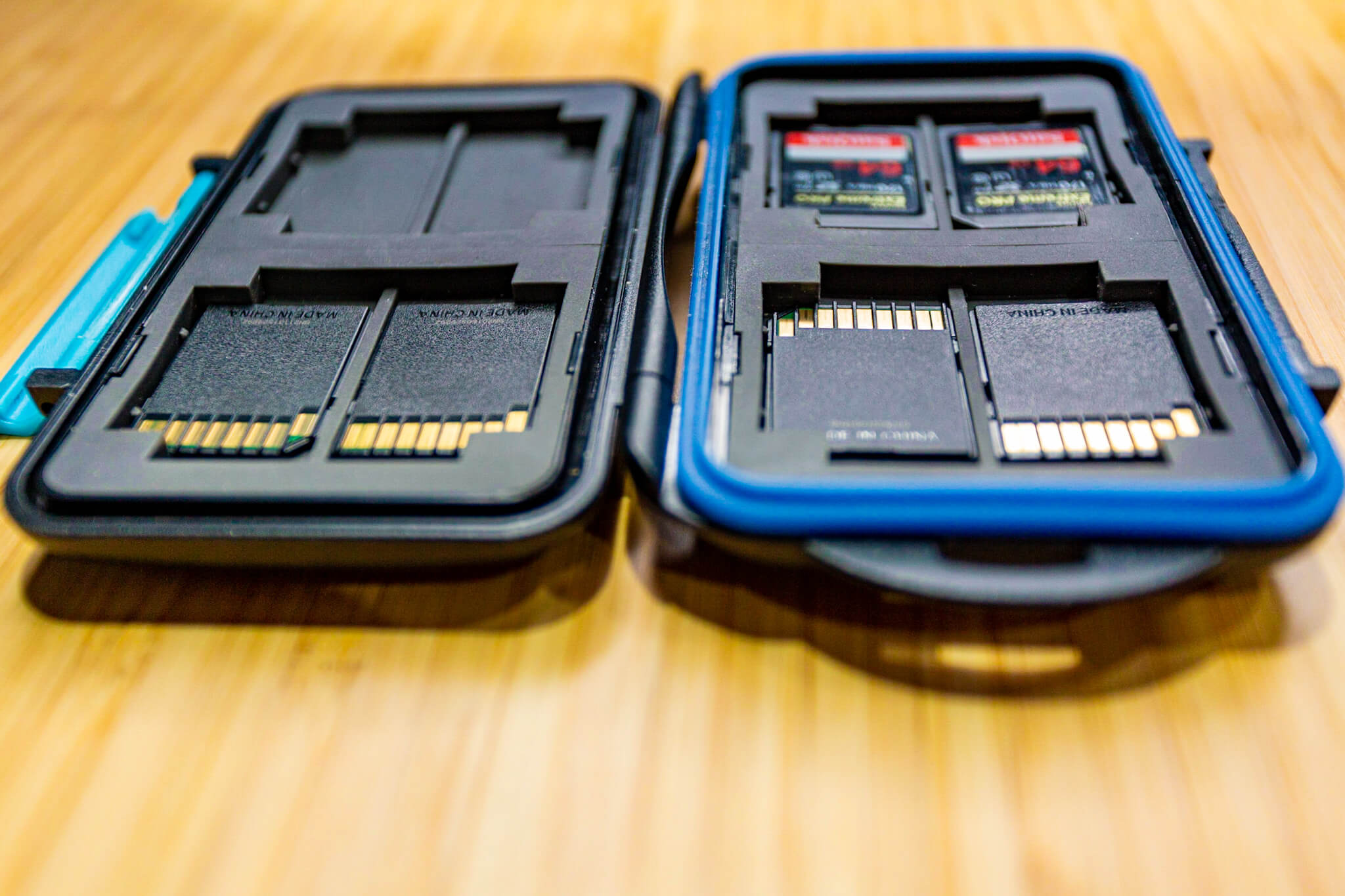 See? I told you it wasn’t all ridiculously expensive stuff in this list. Sometimes, the simplest devices or tools make the biggest difference to your YouTube journey.

My King of Flash memory card case is a great example of this. It’s rugged, waterproof and holds plenty of SD cards (and even Compact Flash, if you’re that way inclined).

But those aren’t the reasons I rely on it so heavily. It remains within a draw in my studio and does nothing more than act as a home for my SD cards. That’s it.

This matters, because that memory card case plays a vitally important role in my YouTube workflow.

Once I’ve used a card and uploaded the footage to my Mac, I place it topside-down in the case to indicate that the footage is in production. That means I have a clear view of cards I shouldn’t touch (those that are placed topside-up are good to go), thus avoiding any chance of overwriting footage that’s in production on a card which is technically a backup for the copy that resides on my Mac.

It’s a process, nothing more, and the case is just a well-made piece of plastic and rubber that adds structure to what I do. But I’d be lost without it (as would my footage). 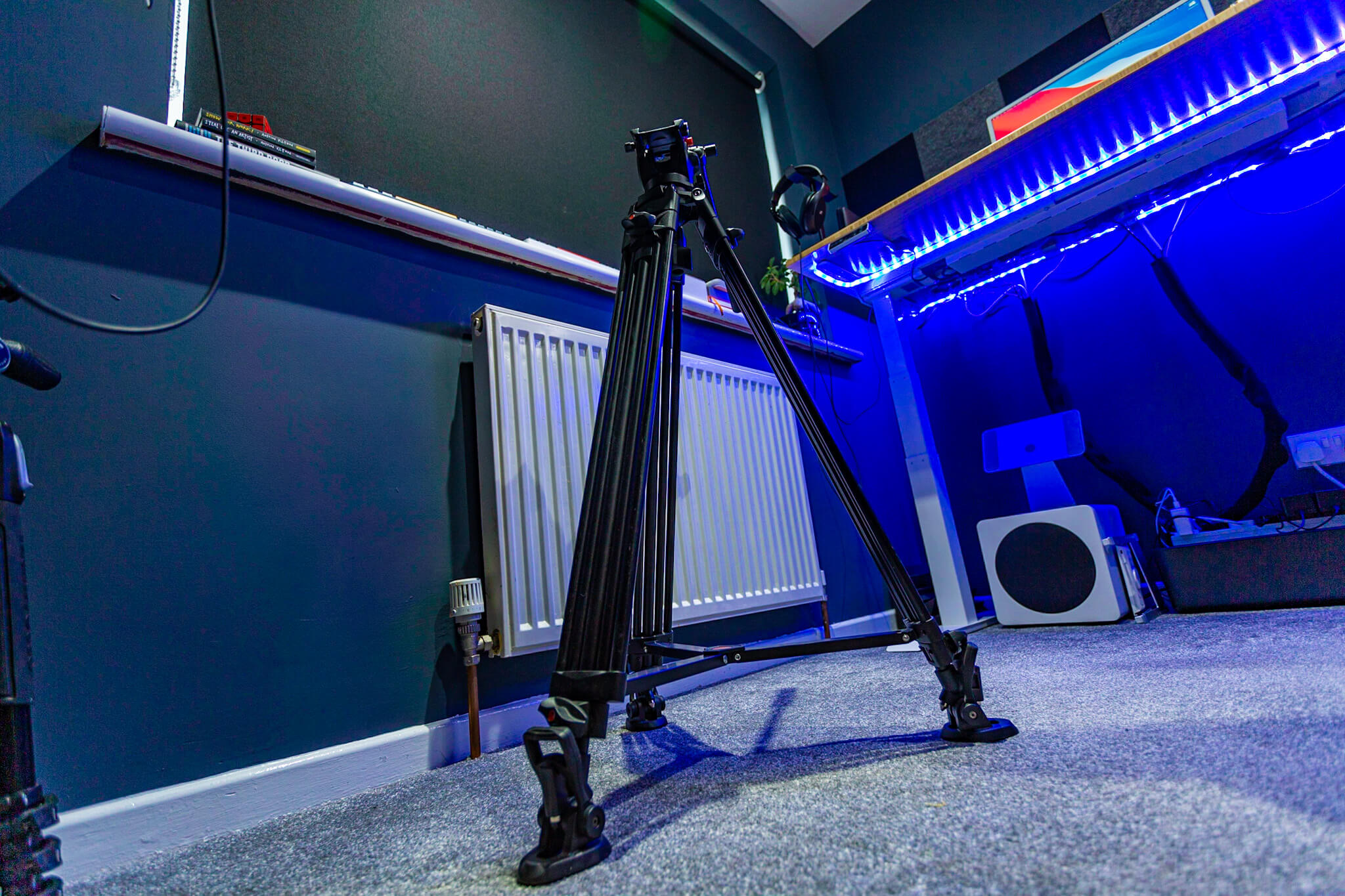 I take great pride in my b-roll, which is why the VILTROX VX-18M tripod plays such an important role on my YouTube channel.

It’s a bit of a beast, although packs down relatively nicely when not in use. But its size and weight make it one of the most stable tripods I own and enables me to get shots that are gimbal-smooth.

It isn’t cheap, but it isn’t the most expensive video tripod out there, either. If you want to achieve buttery-smooth, TV-quality b-roll on your channel, I recommend spending a bit on a tripod like this, over and above those expensive automated sliders and gimbals you’ve been eyeing up. Trust me – the tripod will be far easier to use and give you just as much creative control.

Oh, and if you’re struggling for studio space like me and need a great, desktop-based tripod for your a-roll shoots, I highly recommend this little beauty from Neewer. 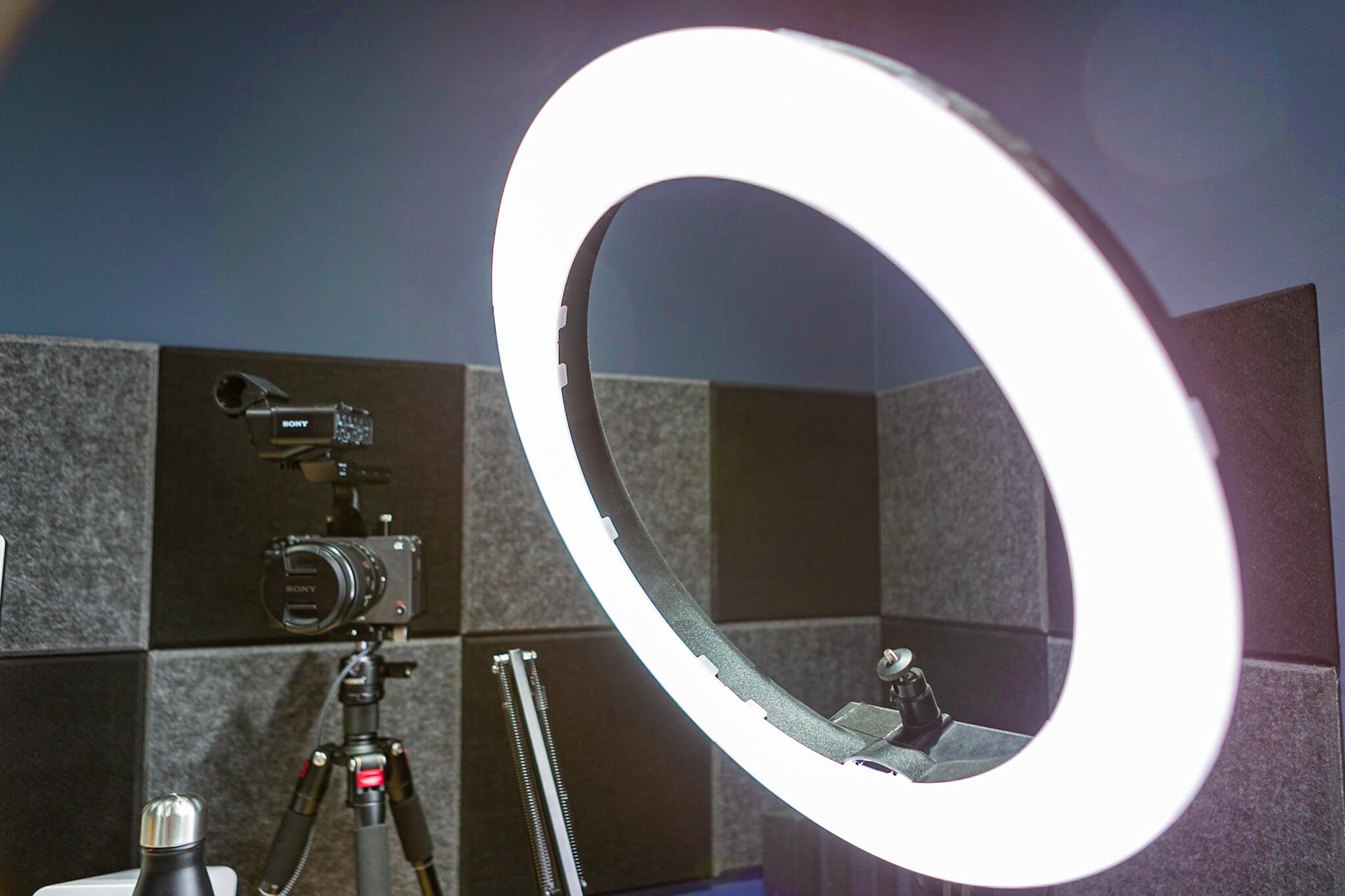 Second only to sound when it comes to the most important elements of YouTube production is lighting.

Yes, you can rely to a degree on natural light when filming your videos, but it is changeable. It’s why I always recommend getting some form of key light for your a-roll shots (and, depending on what you’re filming, for b-roll).

The key light is simply the light used to illuminate your primary subject (which is usually you!). As you might expect, you can spend an absolute fortune on this kind of lighting – but you really don’t need to.

Since I started my channel, I’ve been using a cheap Neewer 18-inch LED ring light. It’s brighter at its fullest setting than I’d ever need it to be in my tiny studio and – touch wood – hasn’t failed on me once.

You do need decent lighting to raise the production value of your videos, but you don’t need to spend a fortune on it.

I hope I’ve given you some inspiration for your next YouTuber purchase. Just remember today’s takeaway; if you’ve already got something that’ll work – use it, but make sure you focus on sound, lighting, video quality and the tiny things that make a big difference to your workflow (in that order).

Get a behind-the-scenes look at my channel

Every week, I send a behind-the-scenes video exclusively to my newsletter subscribers. It’s free to join, and provides a weekly glimpse of what goes into my channel – blood, sweat, tears and all!