This morning, I had to explain to someone within the comments section of my M2 MacBook Air first impressions video that, yes, it would cope with “normal office work”.

This hasn’t happened before. Usually, I’m confirming that yes, if you’re a hobbyist video editor, you’ll be amazed by what you can get away with on an 8GB M1 MacBook Air.

The query above is similar to several I’ve received since publishing my initial thoughts on the base model M2 MacBook Air. There’s clearly a number of users out there who are deeply concerned that the laptop they’ve pre-ordered isn’t going to cope with multiple Chrome tabs and a bunch of Excel spreadsheets.

This has all got a bit silly, I’m afraid.

Today, I’m going to give you my initial thoughts on the base model M2 MacBook Air. And, unlike 99% of the comments I’ve received that suggest it is an absolute piece of garbage of which Apple should be ashamed, the following is based on actually having one of these damn things in my possession.

Why I chose the base model

A quick note on this, because some folk seem perplexed by my desire to opt for base-level MacBook Airs. 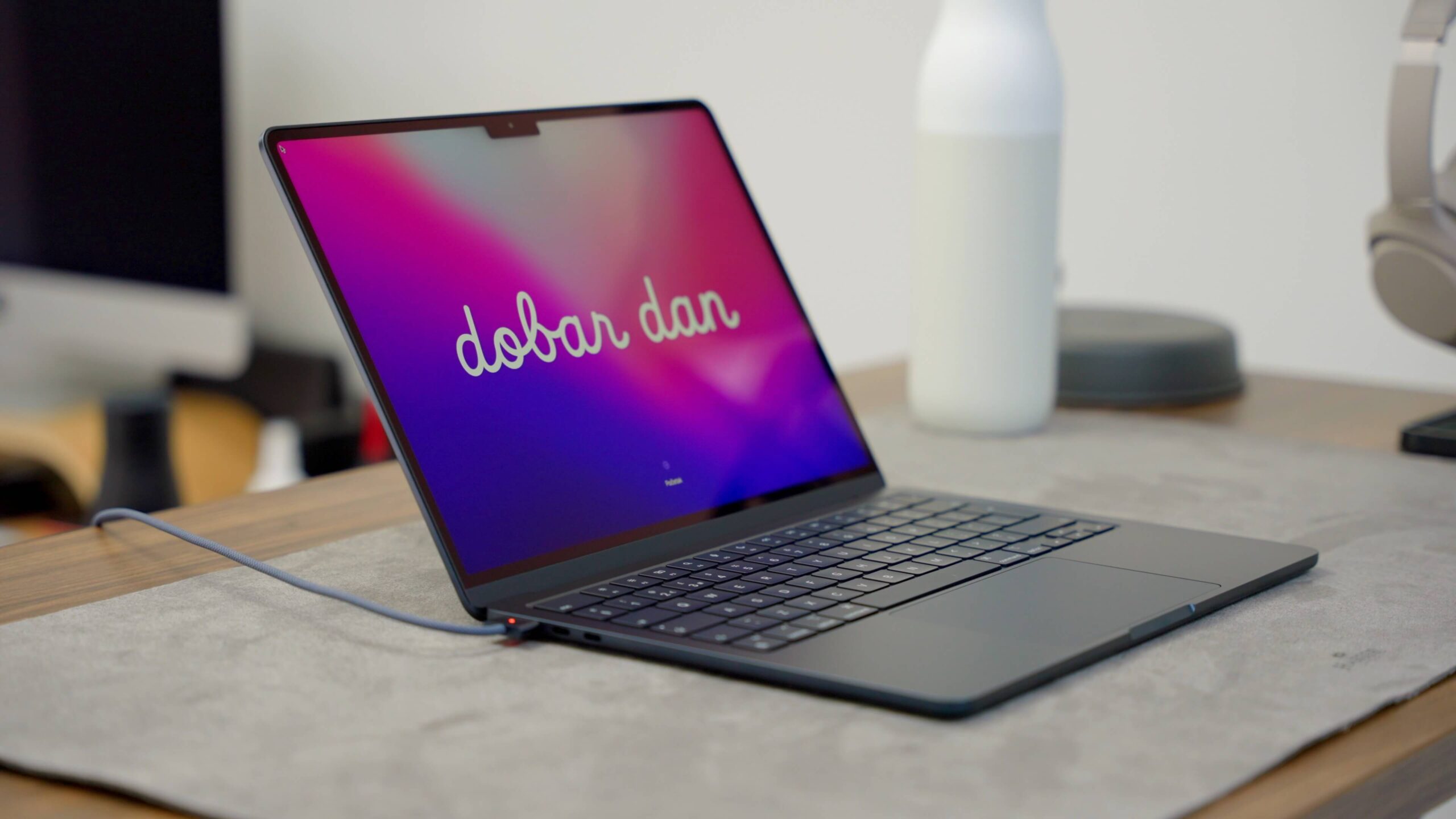 There are two reasons for this:

The M2 MacBook Air has endured a rough entry into the world. Following a typically chest-beaten launch during WWDC, reports of slow SSDs, overheating, and throttling (on behalf of the M2 MacBook Pro) have placed a dampener on the release of Apple’s long-awaited update to the wedge-shaped Air.

Despite there being far more to this story than meets the eye (as revealed during my exclusive interview with Max Tech), the narrative for the M2 has turned into, “it’s slower and hotter than the M1, and incapable of multitasking”.

Undeterred, I ordered the base model M2 MacBook Air. You know – the one with that infamous 256GB SSD and ‘just’ 8GB of unified memory.

Is it really as terrible as we’re being led to believe?

Some thoughts on the hardware

The M2 MacBook Air is a beautiful piece of kit. The choice of imagery on the box in which it arrives says it all; a side profile shot reveals just how ridiculously thin this thing is.

Surprisingly so, in fact. Although not much lighter than the M1 version it replaces, the M2 MacBook Air feels like a whole new world for this laptop. You can think of it as a squashed MacBook Pro – and that’s no bad thing at all. 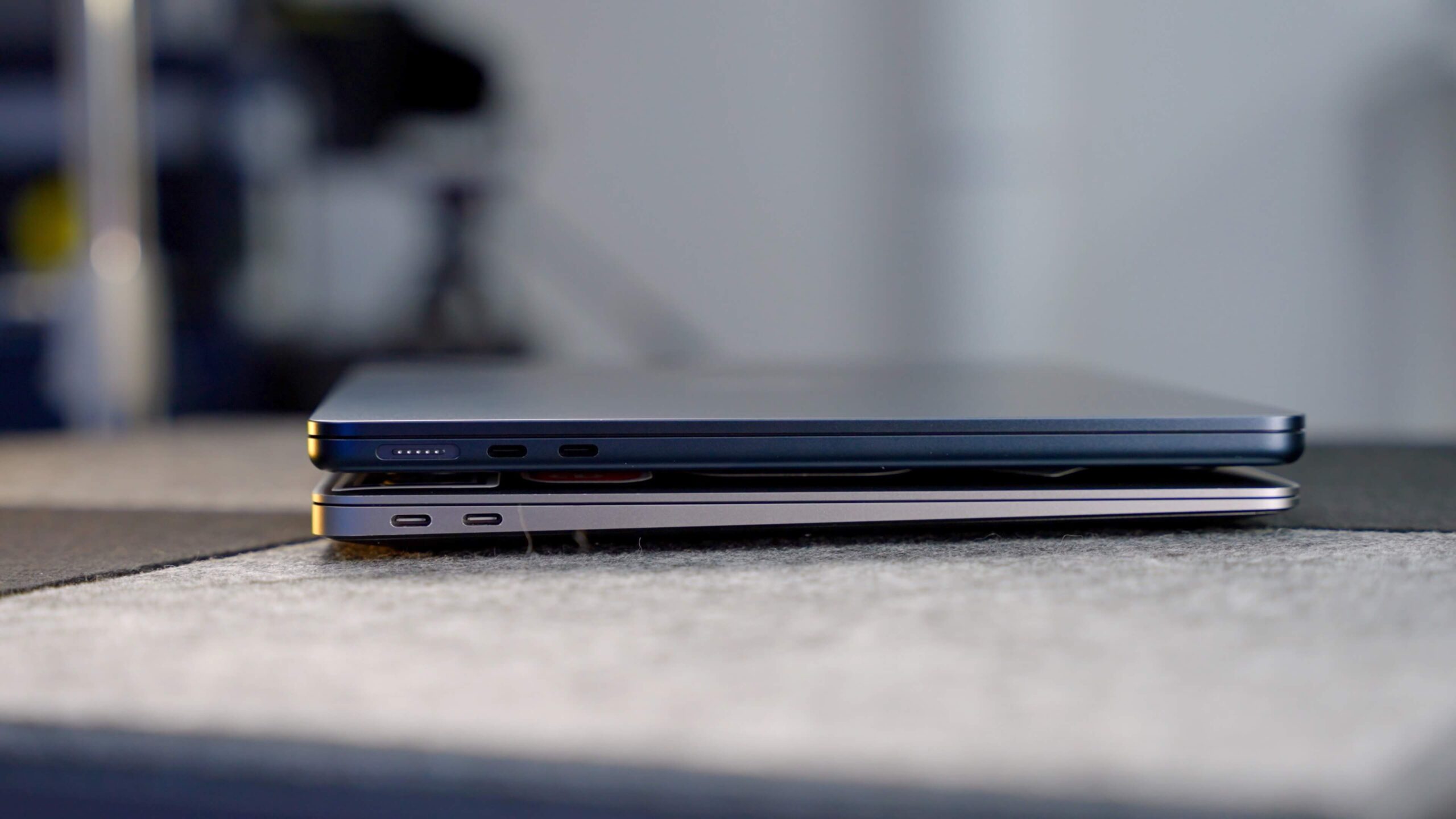 I do worry about how thin this thing is, though. Although untested fully in the wild, there’s a chance that it might be susceptible to bending when jammed less than thoughtfully into one’s rucksack. I’ve even ordered a hard case in preparation for next week’s family holiday. We’ll see how it fares, but I guess Apple’s laptops are at least built like tanks.

If you’re eagerly awaiting the arrival of your own M2 MacBook Air based on looks alone, you’re in for an absolute treat. This is a new era for Apple’s most endearing laptop – and it’s a perfect choice by the design team.

Mine is the Midnight version. It’s a deep, deep blue, which simply looks black to the naked eye. Why Apple didn’t go all in and just create a matte black version is anyone’s guess, but this is as close as we’re going to get. It’s a lovely colour, regardless, and it looks absolutely stunning when you first retrieve it from its box. But that doesn’t last very long at all – seconds, in fact.

As you may have seen on multiple reviews of the same laptop, this thing is an absolute fingerprint magnet. As soon as you pick it up and turn it over in your hands, it loses its good looks. You can wipe those smudges off with a microfibre cloth, sure, but that’s going to get pretty tedious when you realise how quickly it picks up those marks. 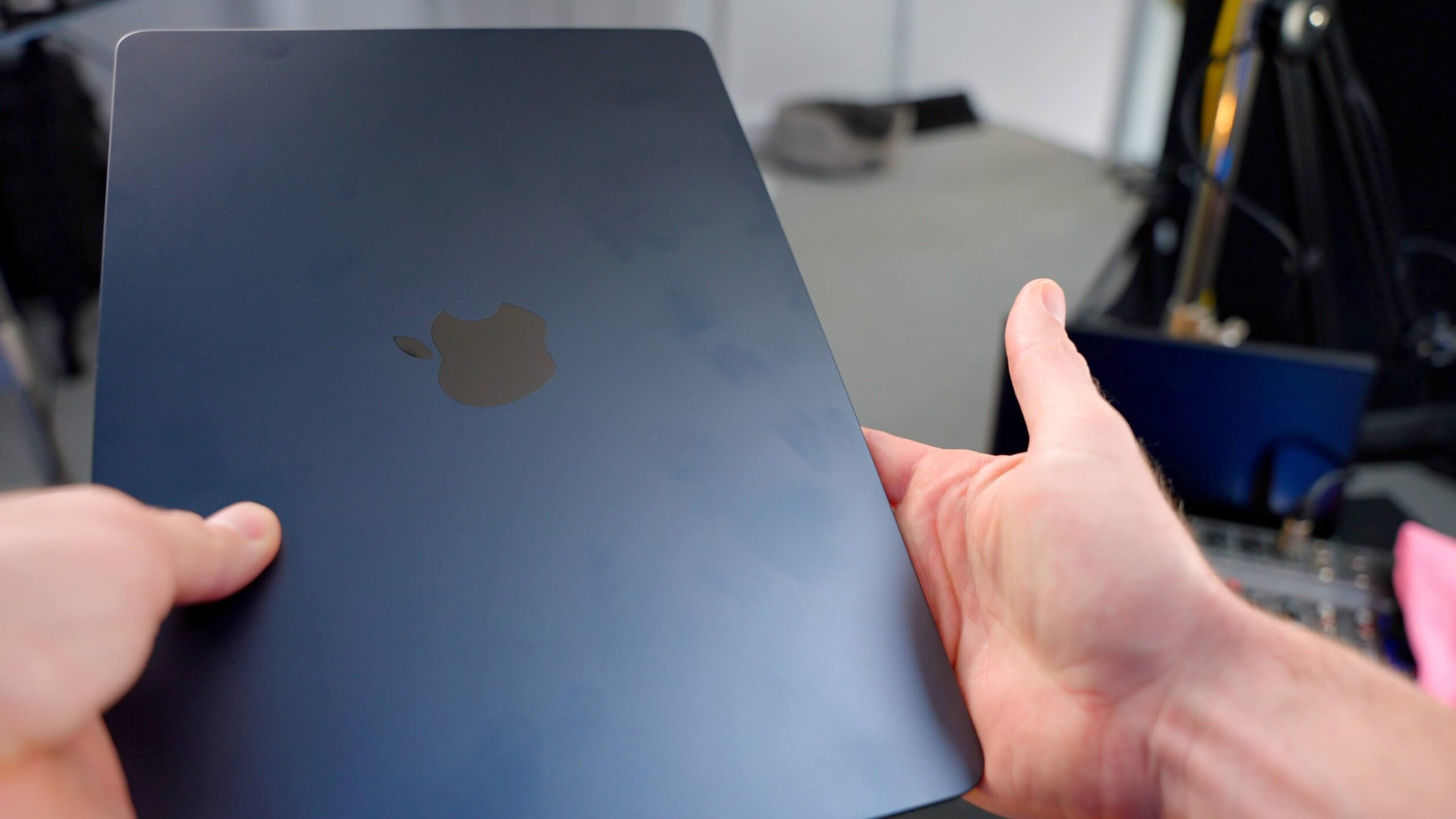 This is such a shame, but it’s something you’ll really need to take into consideration if you’re considering the Midnight version. Equally, time will tell if this particular shade will wear well – I’ll report back on that one.

It might be a placebo effect, and it might be the fact this is a brand-new laptop, but the M2 MacBook Air does feel snappier than the M1 version throughout macOS. 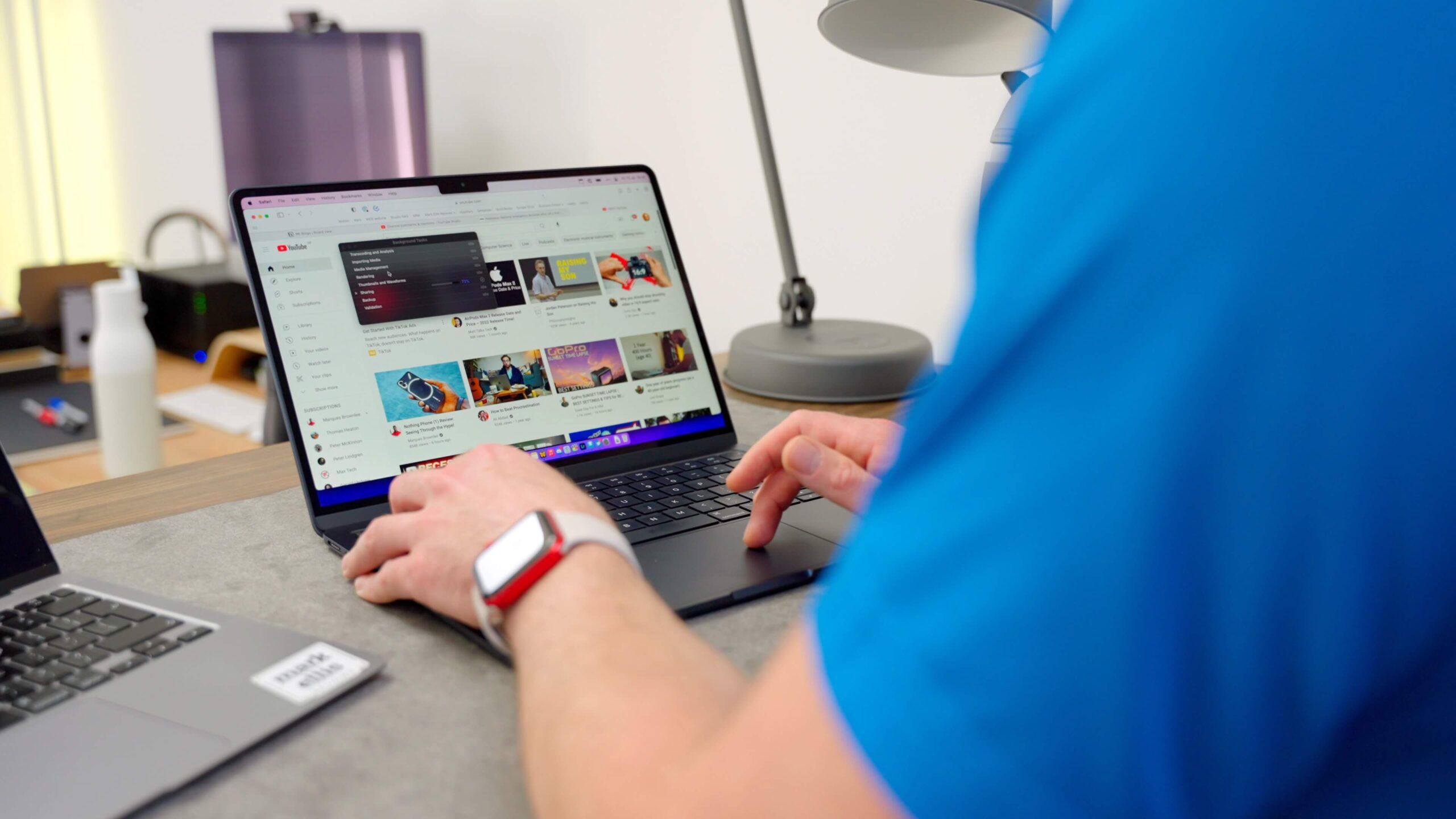 Opening apps is definitely marginally quicker, and the whole platform just feels even smoother than the already smooth M1 MacBook Air. Whatever Apple has done with that single core performance has definitely had a real-world impact. Once again, whether it lasts remains to be seen, but it has certainly nailed the ‘fresh sneakers’ feeling, right off the bat.

But I know you only have one question on your mind at the moment: is the 256GB SSD in this base model M2 MacBook Air absolute garbage or not?

To find out, I ran a test. This involved a 10-minute piece of 4K, 10-bit, 4:2:2 footage from my Sony FX3 camera. Nothing outlandish, but, equally, not exactly light video work.

I wanted to see how export times for that kind of footage in Final Cut Pro fared between the M1 and M2 MacBook Air. So, I devised two scenarios. The first was a multitasking environment. If you’re interested, this is what was running during the export:

This is a completely normal use case for me, and, I suspect, many other people. It’s also the scenario I was most concerned about, following tests by Max Tech which seemed to suggest there’s an inherent issue with multitasking on the base model M2. 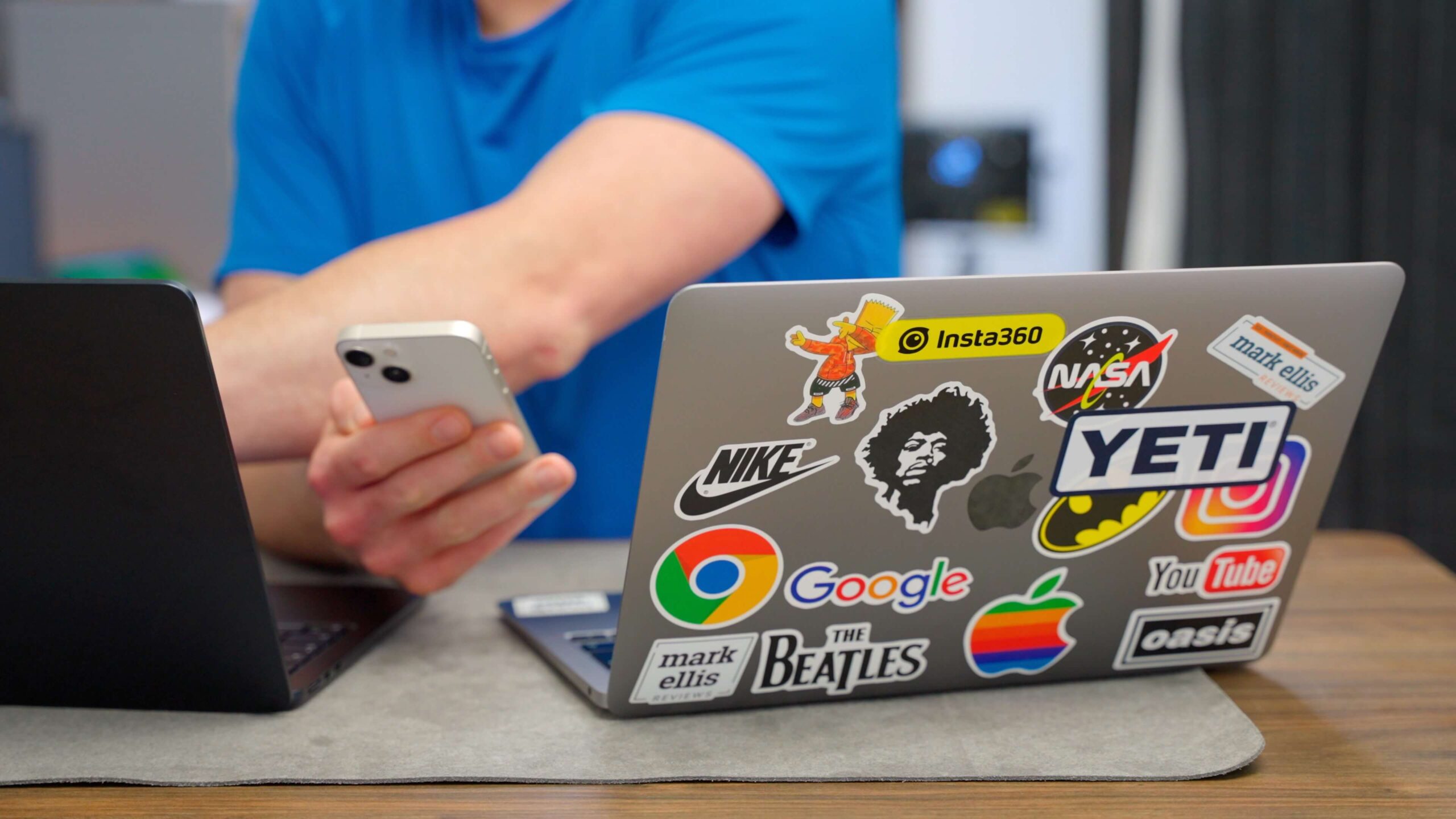 The second scenario was with just Final Cut Pro open. Not a typical use case for me, but an important point of reference, given the aforementioned Max Tech tests.

These are the export times for both scenarios.

So, the M2 MacBook Air is slower at exporting 4K footage than the M1 version when multitasking, by a not inconsiderable 29 seconds. Yet, with everything closed, they performed identically.

However, it’s important to note that both laptops felt perfectly responsive and usable during all of these tests. There was no slow down, beach-balling, or waiting for stuff to happen.

I went a step further. My YouTuber mate, Pete Matheson, has an M2 MacBook Air with a 512GB SSD. He ran the same tests with the exact same piece of footage, and these were his results:

So, if you upgrade from the 256GB SSD to the 512GB SSD, you gain an extra 23 seconds during a 4K export when multitasking.

What does this all mean?

Our tests were far from what you’d call scientific. Pete and I simply exported some footage in Final Cut Pro and attempted to start and stop the timer accurately. 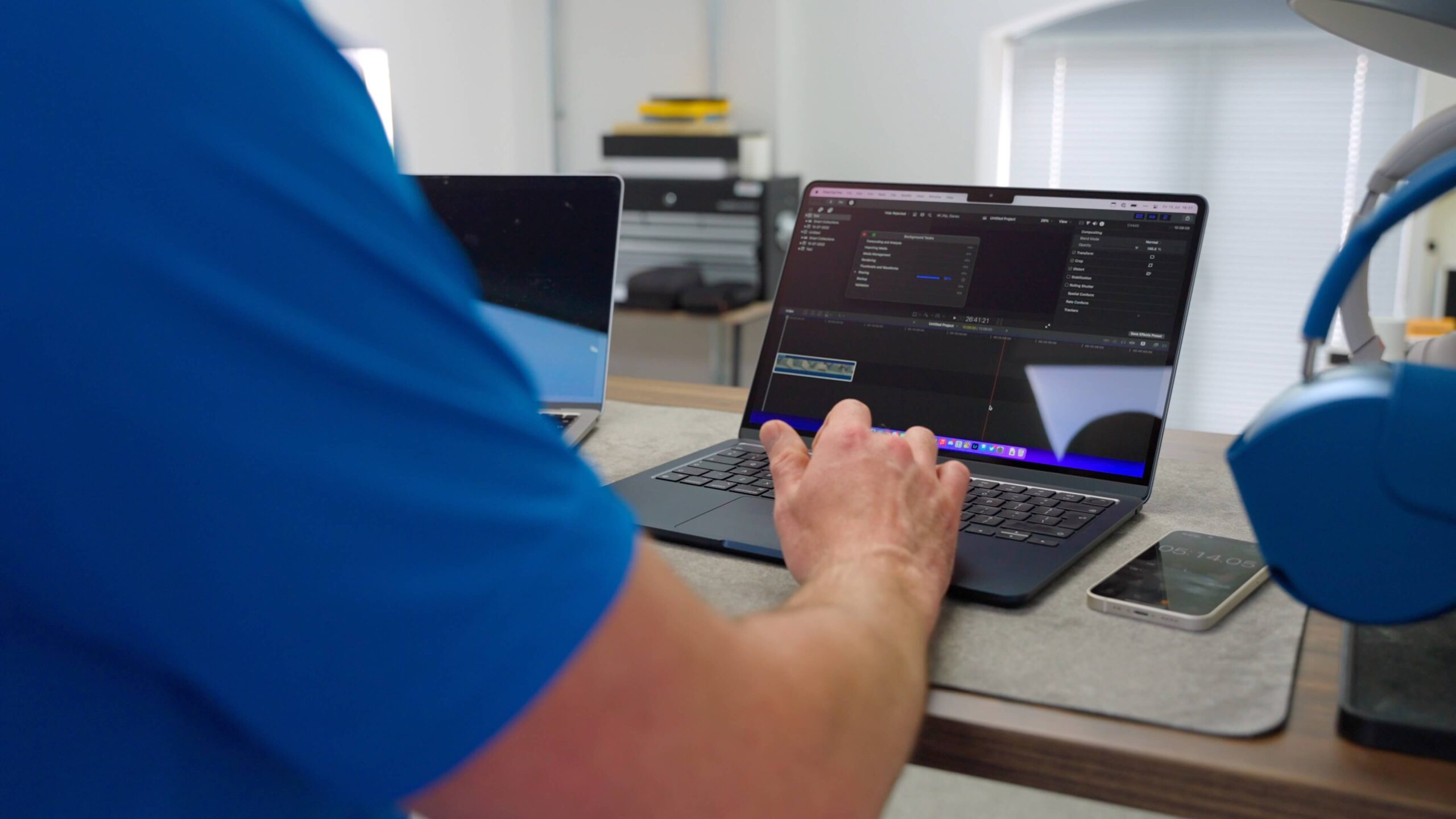 This is the point about benchmarking: it requires skill, expertise, time, and experience. I don’t have any of those things when it comes to testing laptops in that way – and, as I’ve said before, I’d rather connect my teeth to the mains.

It’s for this reason that you can never take just one set of tests at face value. I think we all need to remember that.

The M2 chip is clearly a bit slower than the M1 in certain scenarios. I’m not suggesting this is right or wrong, but I think it’s pretty obvious what’s going on. Apple has cut a few corners. They’ve opted for a single NAND chip (don’t worry – no one else knew what that was a few weeks back, either) as opposed to two, which has in turn – presumably – enabled them to maintain or increase profit margins, while delivering slightly degraded performance.

They’ve taken an educated punt with this, though. They know who buys these machines – they have vast sets of data on the MacBook Air buyer persona; they know exactly who that person is. And they know that it’s someone who will never spot any of this stuff.

Who sits there with a stopwatch and two MacBooks testing 4K export times, just to prove that the new chip is a bit slower than the old one? YouTubers, that’s who. It is utterly irrelevant and a country mile away from the experience of using this laptop in the real world.

What matters is how these devices feel.

As noted at the start of this review – I’m pretty sure that the majority of the people who have entered the comments section of my video with their trousers on fire haven’t even been in the same room as an M2 MacBook Air, let alone use one.

Apple has been a bit naughty. They’ve taken something away from us in terms of multi-core performance. Max Tech’s work is therefore vital in exposing this and letting Apple know that we know about it. But we’ve also been given a laptop that has a brand-new, modern chassis, a better screen, MagSafe, and the kudos that comes from having the latest Apple ‘thing’.

Like it or not, that kudos means far more to the aforementioned MacBook Air buyer persona than NAND chip configurations and marginal differences in Final Cut Pro export times. It’s why Apple made this decision. If I was running Apple, I’d make the exact same set of decisions when it comes to the M2. 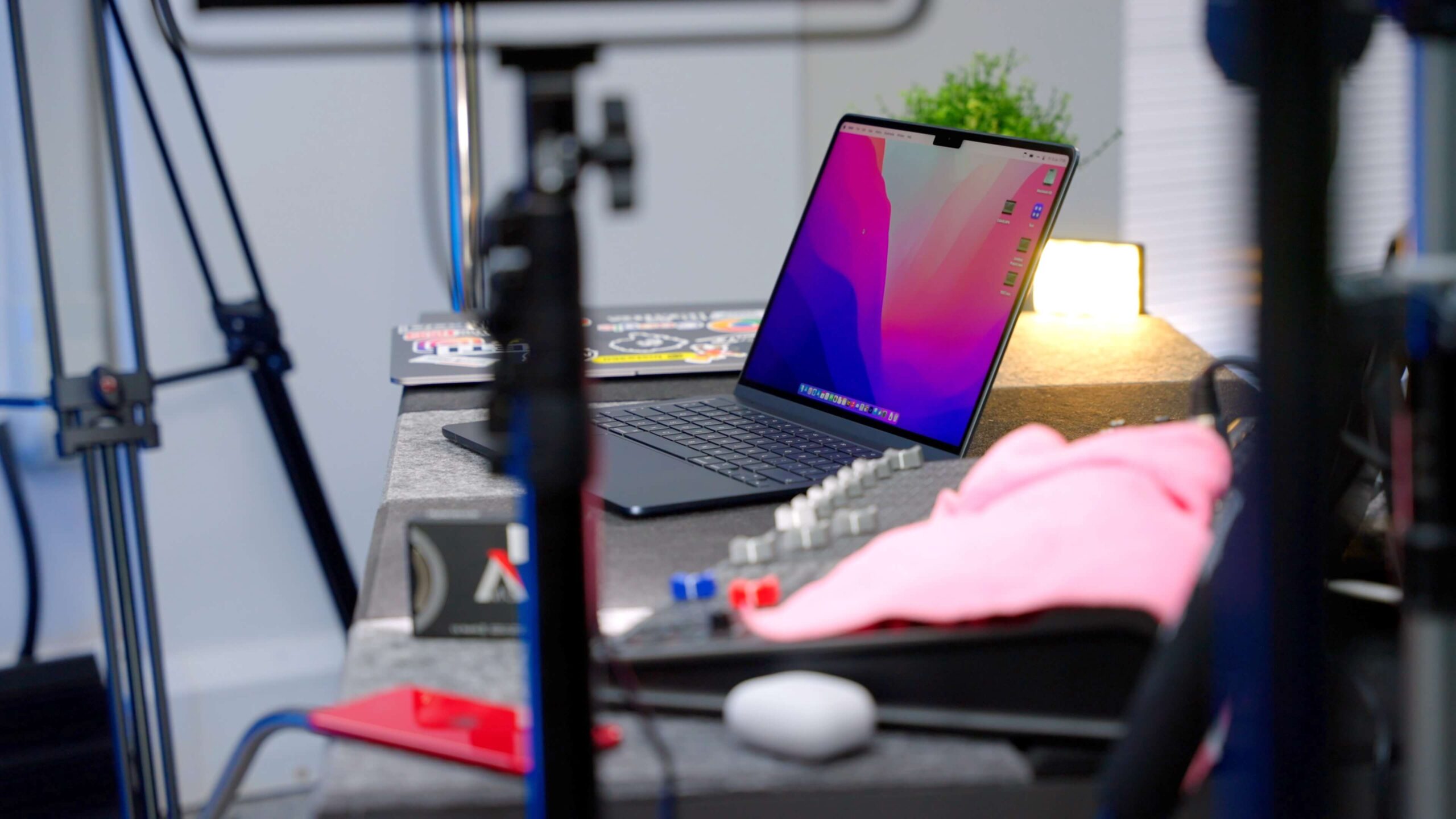 How do I feel about it all?

I think these tests cause mass hysteria among the folk who are waiting for Apple to trip up, but they simultaneously cast pointless shadows over the vast majority of buyers who will absolutely love this laptop. For them (and me), all of the stuff Apple has added to this MacBook Air results in a great upgrade over the previous model.

I shouldn’t be taking questions from people about whether or not the M2 MacBook Air can handle spreadsheets.

Something has gone badly wrong here, hasn’t it?

This wasn’t a full review of the M2 MacBook Air – it can’t be. However, this machine is going to replace the M1 version as my main workhorse, which means it’s really going to be put through its paces over the coming months.

I can’t wait to see how it fares, and I will, of course, be reporting back regularly – starting this coming Friday with a video review of my first full week with the laptop.

Expect many, many extra thoughts.