I avoided calling this a ‘long-term review of the 16-inch MacBook Pro’ because it isn’t. Five months isn’t long enough to deliver a full, unfiltered verdict on a tool like this.

But the M1 Max-powered 16-inch MacBook Pro has been sitting at the heart of my production process for nearly half a year now, and I have many thoughts.

This wasn’t a cheap computer; it set my business back £3,699. It therefore had one task: deliver, big time, when it comes to video editing performance, and the potential to be a super long-termer.

This is what I’ve discovered.

My 16-inch MacBook Pro spends most of its time in Final Cut Pro. There’s occasionally some light audio work undertaken in Logic Pro when producing the Eight or Sixteen podcast and mic audio for my YouTube videos, but that’s it. 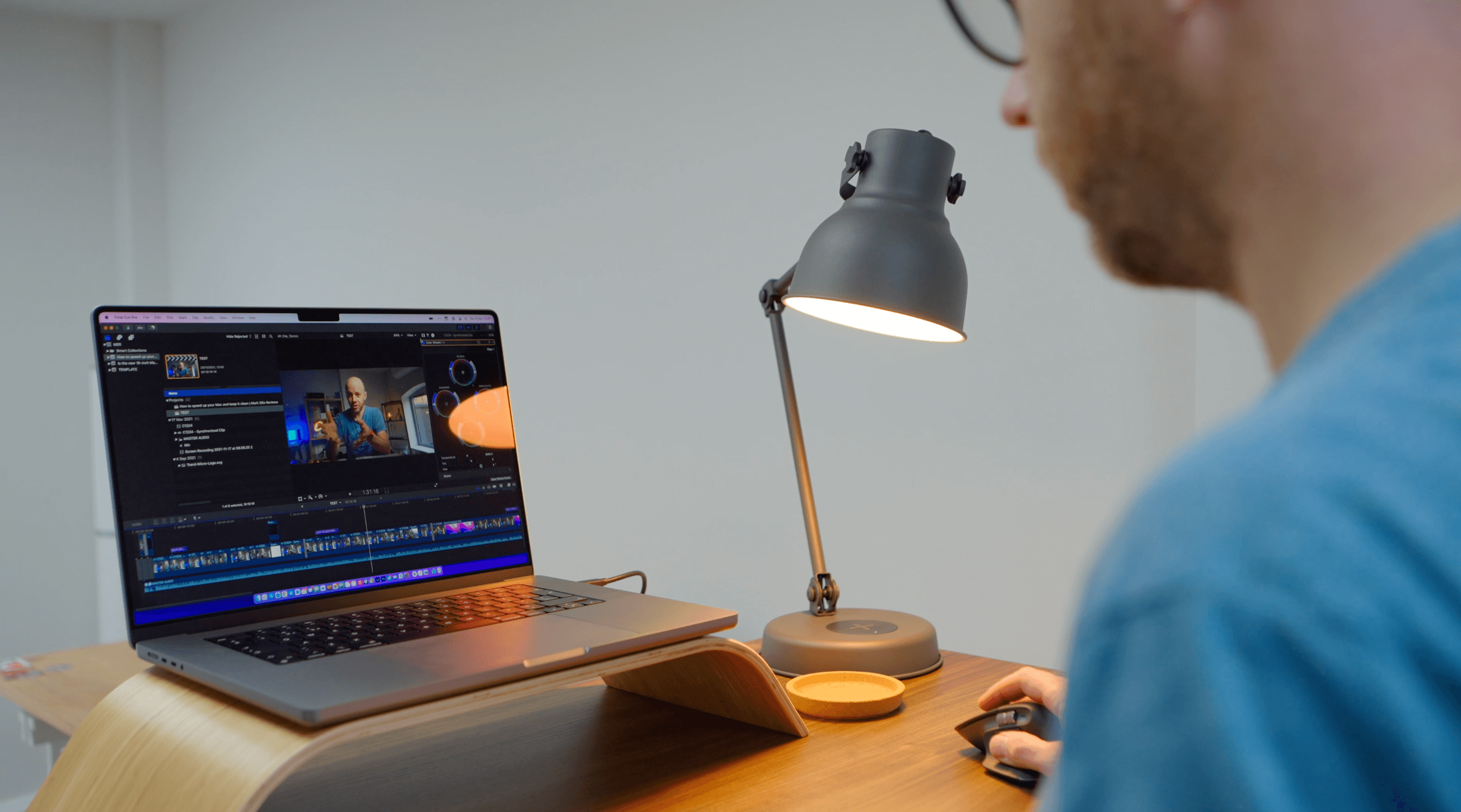 This is why I opted for the M1 Max over the M1 Pro and maxed out the graphics cores. And I’m glad I did because I have no doubt that this laptop could perform as my main editing rig for many years.

There is so much headroom on this thing. Rendering and exporting are as quick as I’d ever need them to be. Dropped frames are incredibly rare. It feels ludicrously well optimised for Final Cut Pro and makes absolute mincemeat of the footage produced by my Sony FX3 camera.

However, this laptop is almost too quick for Final Cut Pro. Anyone who has used a super-spec Mac with Apple’s video editing suite will be familiar with the teeth-grindingly irritating timeline performance.

No matter how fast your Mac, Final Cut Pro steadfastly refuses to redraw audio waveforms and clip previews on the timeline quick enough. If you happen to scroll through the timeline beyond the immediate view while your video is playing, you have to halt proceedings and wait for Final Cut Pro to reveal the missing waveforms and clip previews. It’s now muscle memory for me – which is ridiculous.

So, a huge tick for straight-line speed in video editing, but the inherent issues this surfaces within Final Cut Pro simply aren’t good enough. From what I hear, Adobe Premiere displays no such issue. Please get it sorted, Apple.

Why it isn’t my daily carry

Whenever I mention how big and heavy the 16-inch MacBook Pro is, people tell me to visit the gym.

But I don’t care. Because it is really big and really heavy.

This presents two issues. The first one is the prospect of carrying it while naked (the laptop – not yours truly, you’ll be glad to hear). With the 16-inch MacBook Pro in your hands, you’re immediately conscious that one slip or ill-judged twist of the wrist could send an awfully expensive laptop hurtling towards Dentsville. 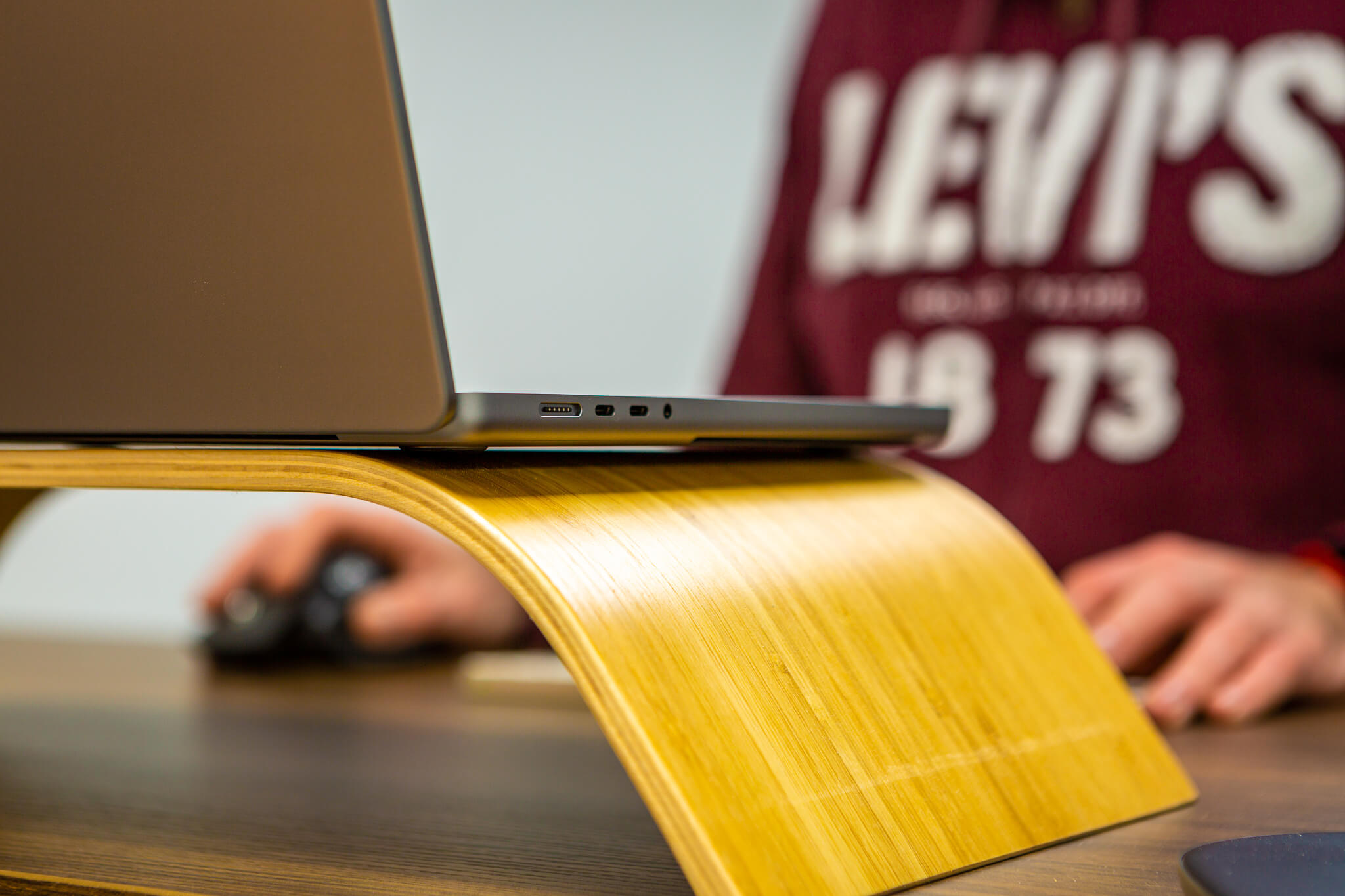 The second is the backpack conundrum. I regularly walk or cycle to my studio, which means placing the 16-inch MacBook Pro in some form of a bag. Occasionally, this is the brilliant Waterfield Tech Folio Brief, or the equally great Nayo Urban.

When placed in a decent rucksack like the Nayo Urban, the 16-inch MacBook Pro isn’t particularly back-breaking. Trust me, you know it’s there, but for a relatively short walk or bike ride, you’ll get by.

The problem I have is that I worry constantly about how it has been placed in my rucksack, and whether or not there’s any danger of the laptop being bent or inadvertently dented over time. I’m fairly confident that its construction is tough enough to allay these fears, but I’ve heard horror stories of people misshaping their big daddy MacBooks in this way, and it’s a fear I haven’t had with a laptop previously.

For me, it’s too unwieldy to be a daily carry. It’s why I never take it to coffee shops, and why I’m desperately awaiting Final Cut Pro on an M1 iPad Pro.

Pairing with the Studio Display

The 16-inch MacBook Pro display is glorious. In fact, I’d suggest that it goes some way to justify the lofty price tag solely by itself. 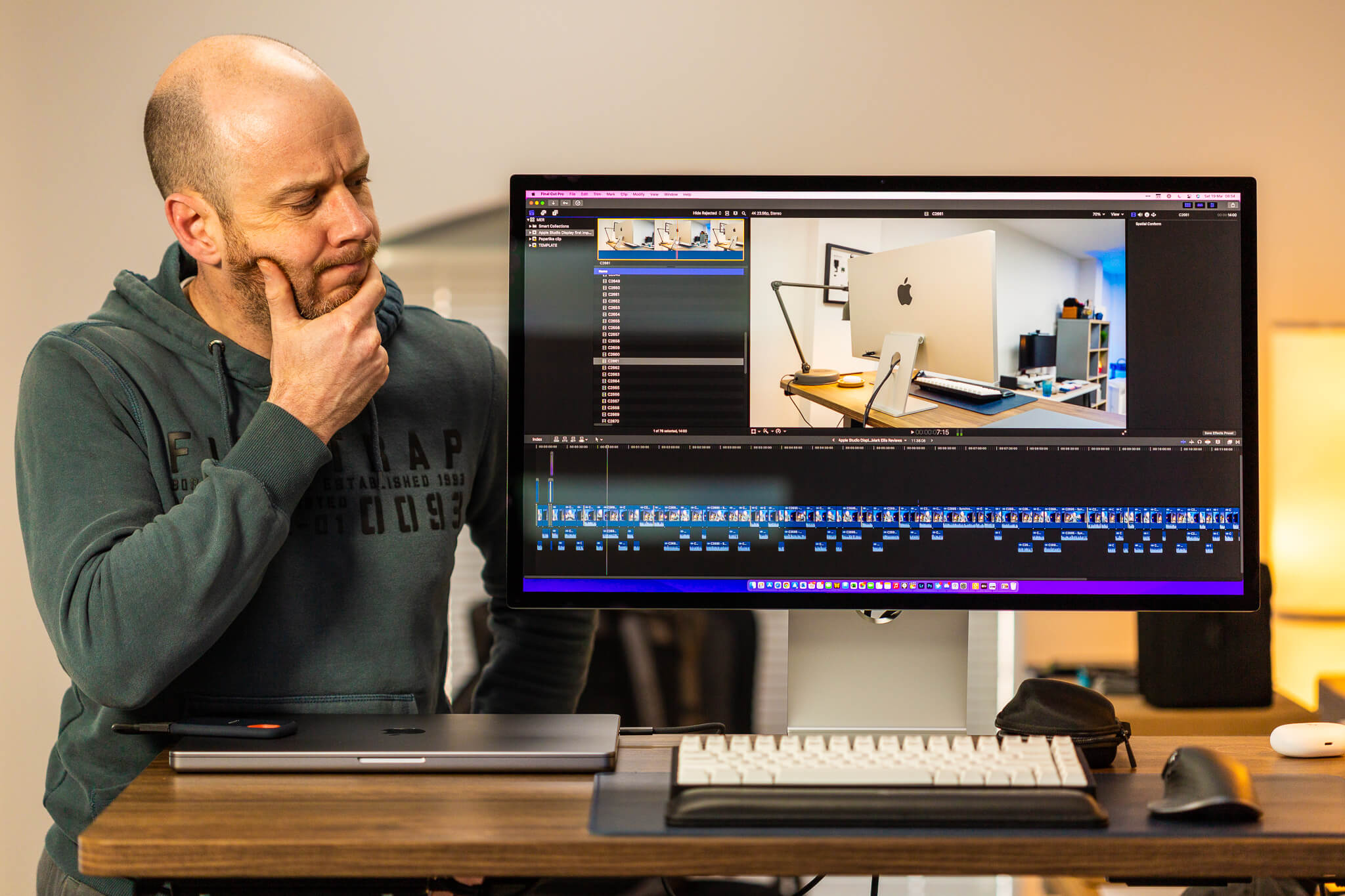 I’ve used it to edit every video I’ve published on the channel since the laptop arrived. The combination of wonderful colour accuracy and super-creamy ProMotion scrolling within Final Cut Pro make it a joy for this task.

Despite this, I was hankering after something else when visiting the studio. While the 16-inch MacBook Pro’s screen feels fine for dining room table editing at home, it felt a bit lost in my studio space. So, when Apple launched the Studio Display in March, I jumped on it.

This isn’t a review of the Studio Display – you’ll find my full thoughts on Apple’s new monitor on my YouTube channel. But regardless of its failings and steep price, the Studio Display has filled the aforementioned gap in my studio; it has become the perfect big-screen partner for my 16-inch MacBook Pro.

The one-cable-does-it-all connection between both devices is as convenient as you’d expect, and the screen estate is ideal for my needs. Granted, this isn’t a cheap setup (an eye-watering £5,198 to be exact), but it’ll deliver for many years to come.

If you know me, you’ll know that I’m far more interested in convenience than benchmarks. And I’m happy to report that the 16-inch MacBook Pro provides two features that make it an absolute joy to live with. 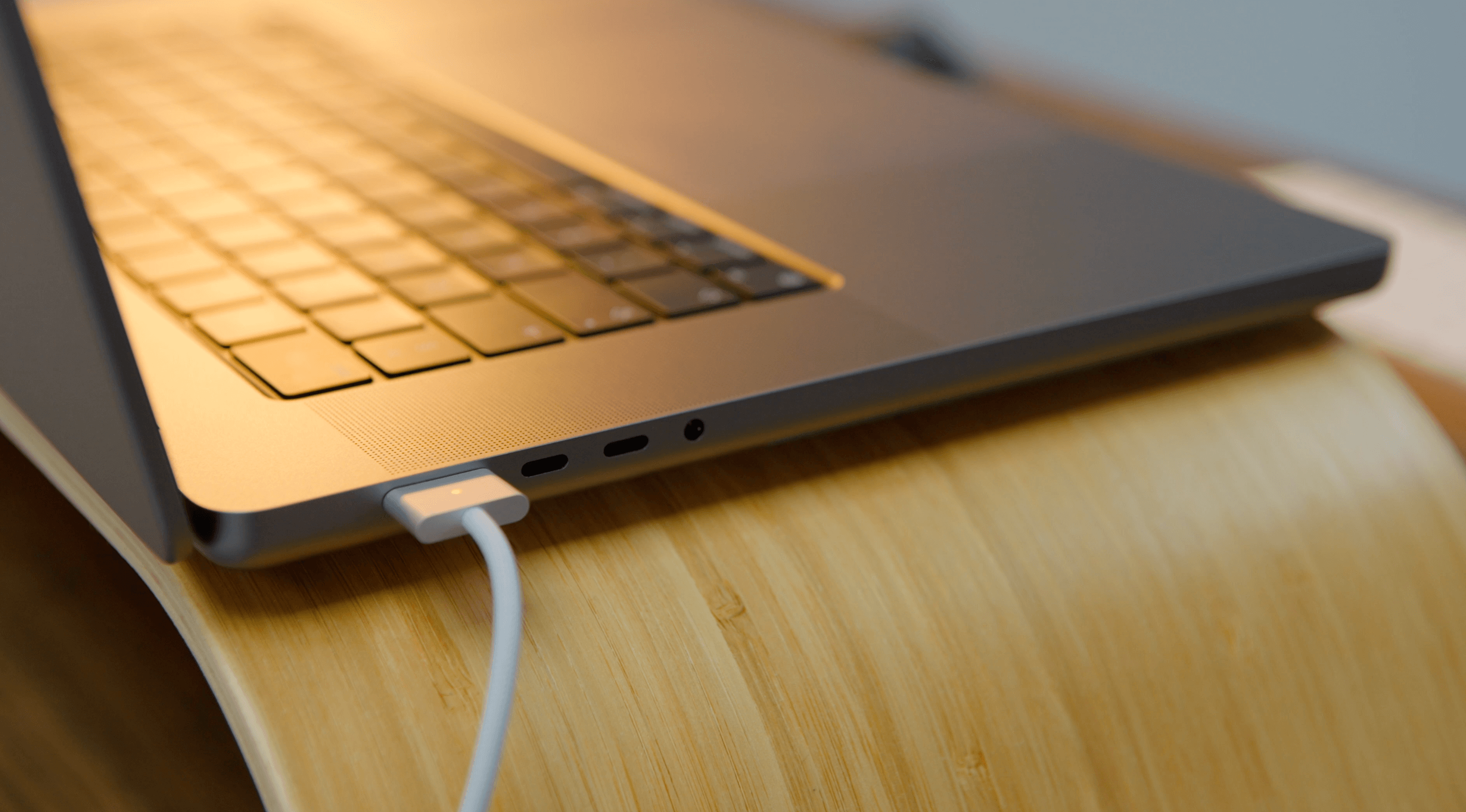 The first is the battery life. Trust me – the amount of juice you get from this thing is utterly insane. I regularly forget that I’m working on battery power, even when editing videos in Final Cut Pro.

The low battery warning is such a rare sight. Add to that the incredible standby performance, and you have a laptop that completely removes battery anxiety from your working day – even if you’re knee-deep in heavy-duty creative stuff.

The second came as a surprise. It’s the speakers.

I’ve never been among the crowd who hail Apple’s speaker technology as being some form of audio revolution. It isn’t. But you can’t ignore the fact that Apple somehow manages to make very small speakers sound very good indeed.

The speakers on my 16-inch MacBook Pro are so useful that I regularly use them to monitor audio while editing and polishing my videos. I wouldn’t recommend using them as the single source of truth if you want the best possible end result, but when you’re working with pretty much the same audio each time (my mic settings and environment are consistent), they remove the need for headphones.

I’ve noted recently that we have now officially entered the law of diminishing returns for the Mac. My situation illustrates this: I don’t need all of the power within my 16-inch MacBook Pro. Unless I seriously upgrade my shooting gear, I probably never will. 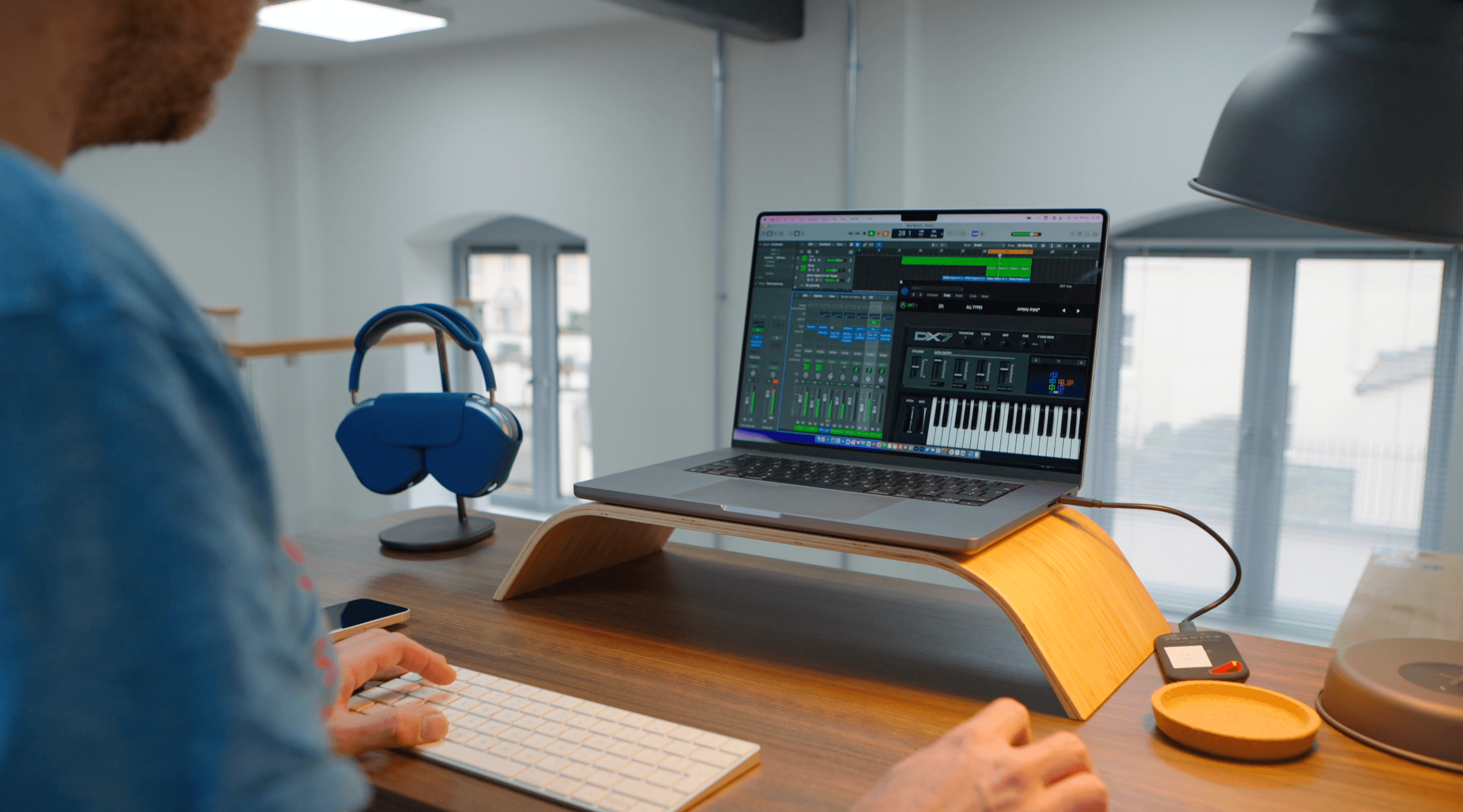 Could I have instead gotten away with the M1 Pro version? Absolutely – and because of that, my buying guidance for the MacBook Pro remains the same: most people will find more than adequate power within the base model.

Despite this, there is something rather comforting about owning a laptop like the M1 Max 16-inch MacBook Pro. It’s a bit like my car, which has 365BHP and a limited top speed of 155MPH. Neither of those abilities is of any use on UK roads, and they never will be – but I quite like knowing that it’s capable of such feats.

My interest in the 16-inch MacBook Pro is similarly aspirational. Using it feels almost naughty – like someone has given me the keys to their powerful car and asked me to nip to the shops. I’m acutely aware that exploring its limits is beyond me and my workflow, but I also know that for this reason, I’ll never be left wanting more.

If you’ve got the budget and desire to own something as silly as this laptop, you’ll be very happy with your purchase. If you’d rather admire it from afar and instead invest in something a little less potent, the good news is that these days, you won’t be left shortchanged.