A couple of weeks ago, I noticed a spike in the analytics for my website. It was a significant one; the traffic doubled in 24 hours and remained that way for a few days.

This seemed odd. We have, after all, just emerged from the lung-busting marathon that is ‘Techtember’ and ‘Techtober’ (sorry). Surely the numbers should be going in the other direction?

Not so, it seems. On further investigation, I discovered that the spike were almost solely linked to one piece of content – a relatively innocuous piece I wrote about the iPhone 13 mini’s battery performance.

Being a content creator constantly in search of the next trending topic, I obviously jumped on this and sought confirmation from my YouTube audience. Did they want me to revisit the iPhone 13 mini in 2022?

Yes, they did. Big time.

To give myself something to go on for this next bout of iPhone 13 mini content, I decided to ask my YouTube audience, Instagram followers, and fellow Twittererers what questions they had about the iPhone 13 mini, twelve months after its launch. Loads of you got in touch, so thank you very much.

These were the most common and thought-provoking questions I received about Apple’s brilliant little smartphone.

We have to be realistic about the iPhone 13 mini when it comes to battery life. Although it is indeed far better than the woeful stamina offered by the iPhone 12 mini, it is still resolutely a one-day phone.

That’s under normal use, too. Towards the end of my tenure with the iPhone 13 mini, I found that the battery was draining quicker; I’d typically head into the early evening with the need to find a charger.

With hindsight, I think this was due to me using it far more comprehensively for content creation – I was creating more video with my iPhone 13 mini and using it to shoot a lot of imagery for the brand.

The battery will always be a compromise with the iPhone mini series, but if you can accept the odd day when it runs out earlier than expected, you’ll love the rest of it.

”What are the speakers on the iPhone 13 mini like?”

Apple does some wonderful things with audio these days – particularly when you consider how little space they have to work with.

This is certainly the case with the iPhone 13 mini. This is a very small device, yet Apple still manages to pull off some fantastic audio trickery, which makes means it retains the iPhone’s status of being the best-sounding phone on the market.

It won’t fill a room, obviously, but you can happily use it to blast out a tune or two while making dinner.

Will there be another iPhone mini?

I don’t think we’ll see another iPhone mini, unfortunately. Although Apple will never tell us how many they’ve sold, clearly it is an underperforming product for them.

This has always surprised me. My original iPhone 13 mini review remains the most popular YouTube video I’ve made and, as noted earlier, the reason I’m writing this guide is that I’ve noticed a huge spike in interest over the last few weeks.

Regardless, the numbers clearly don’t stack up for Apple.

Will the next iPhone SE look like the iPhone 13 mini?

Although we may not see another iPhone mini, that might only be true of its official name. There have been numerous rumours that Apple will replace the current, ageing iPhone SE design with that of the iPhone 13 mini.

This would make sense; the iPhone SE is badly in need of a makeover, and the iPhone 13 mini appears to be just the right size to take over the role of Apple’s most affordable smartphone.

Unfortunately, there are also plenty of rumours that the next iPhone SE will in fact borrow its design and feature cues from the iPhone XR. So maybe this really is the end of the line for the iPhone mini.

How long will the iPhone 13 mini last for?

If you treat your iPhone 13 mini well, you’ll get at least four years out of it – if Apple retains its current backwards compatibility strategy for iOS (which it almost certainly will).

If you’re willing to go out of date with iOS (I can’t recommend that, due to the importance of security updates), then it’ll last an awful lot longer. This is a powerful device (remember, it possesses the same chip as the iPhone 13 Pro series) and as I’ve proved on numerous occasions, it’s tough, too.

How long will Apple support the iPhone 13 mini?

As noted above, you’re in good hands with Apple when it comes to offering support for older devices.

If we look at the compatibility list for iOS 16, it goes right back to the iPhone 8 Plus, which is a five-year-old device. This is, once again, a testament to how powerful and ahead-of-the-curve Apple silicon is.

Just like the iPad, the iPhone will always be ahead of the operating system it’s powering and Apple is one of the best at keeping its oldest customers up to date (although just bear in mind that you might not get every new feature five years down the line).

iPhone 13 mini camera versus iPhone 14 camera – how does it compare?

I’ve captured some of the best photos I’ve ever taken with the iPhone 13 mini. I still can’t believe I shot the photo below with it in Montreal last year. 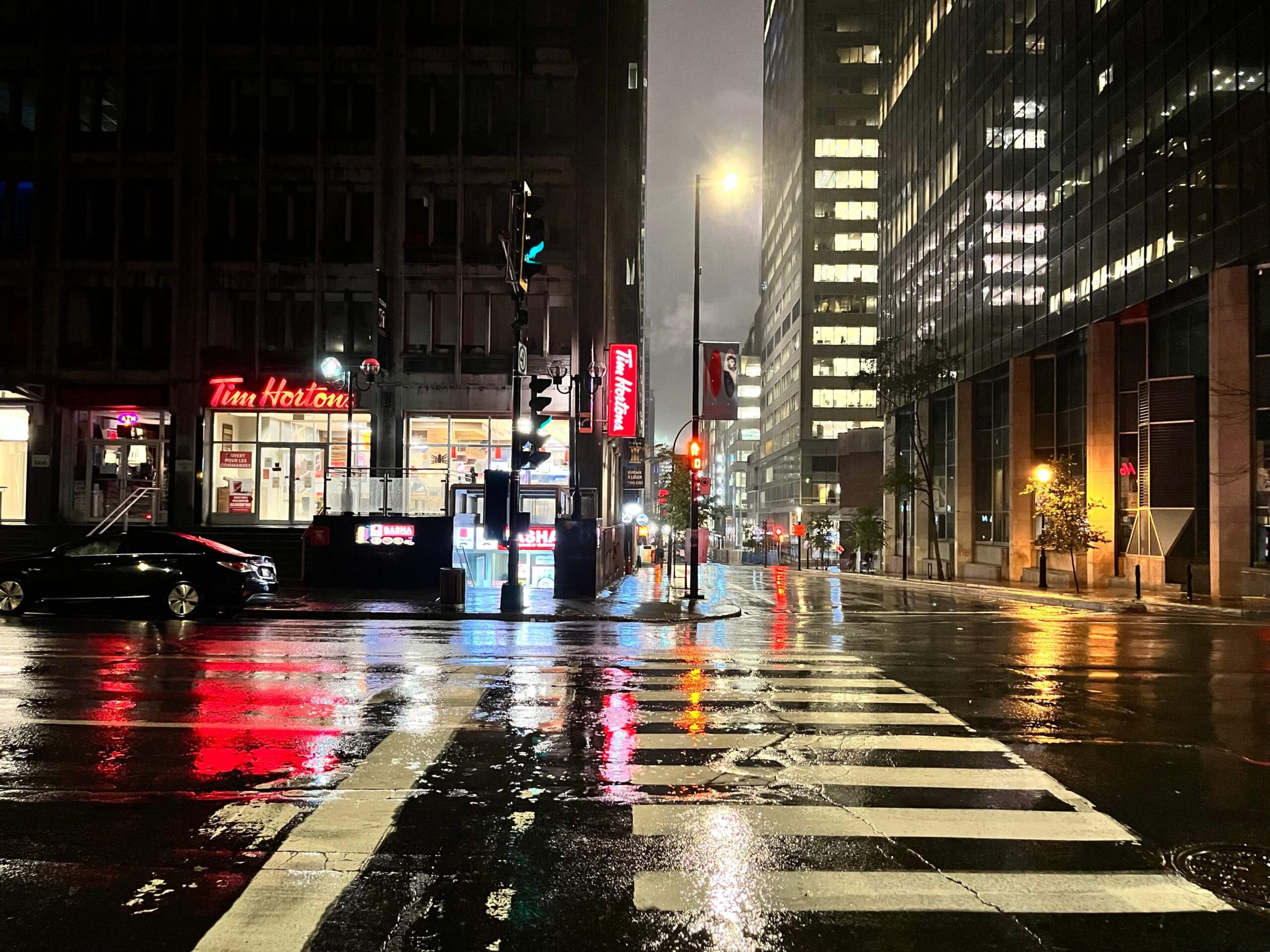 Keep in mind that this was taken very early in the morning by a jet-lagged, freezing-cold, slightly lost traveller who was halfway through a run. I just happened to spot this tempting scene which prompted me to whip out the iPhone 13 mini, point it roughly in the direction of what I was looking at and hit the shutter button.

The result could have been taken with a far more expensive DSLR camera.

It would be nice to have a telephoto lens (the iPhone 13 mini has the standard zoom and ultra-wide), but that’s a small gripe when the camera hardware and software smarts powering it are so wonderful.

Do you miss your iPhone 13 mini?

One of the worst parts of being a tech reviewer (don’t worry, there aren’t many) is the inability to keep using devices you fall in love with. I need to remain up-to-speed with the latest iPhones on the market, which meant the iPhone 13 mini was only ever going to spend a maximum of twelve months with me.

If you’ve got money burning a hole in your pocket for the iPhone 13 mini and it has been doing so for some time, just go for it.

In fact, stop reading this now and go and buy yourself one. Clearly, you want it, and I can happily confirm that you will be delighted with your purchase (I haven’t seen a single comment from anyone who has regretted buying this device).

My answer above covers this one, but just to confirm, yes the iPhone 13 mini is a significant upgrade from the iPhone 12 mini.

This is for two reasons – the battery performance, and the camera system. Both make whatever money you’ll need to find for the upgrade or to fund the trade-in completely worth it.

Yes. It’s more expensive, of course – to the tune of £150, but when you consider what you get for that over the iPhone SE, it’s easily justifiable.

The iPhone 13 mini will give you a better, more expansive screen, Face ID, a far better camera system, and a modern iOS experience. There really is no competition when you compare it to the iPhone SE 2022.

Does the iPhone 13 mini overheat?

I received a couple of questions about this, but the suggestion that the iPhone 13 mini is susceptible to overheating is news to me.

It has got overly warm on a few random occasions, but I’ve had that with every iPhone I’ve owned, and a restart, as always, fixes those instances. But if you’ve heard about some form of ‘Overheating Gate’, I’d ignore the concerns – the iPhone 13 mini has never proved problematic for me in that area.

Is the iPhone 13 mini too small for watching YouTube?

I was surprised by how often I used the iPhone 13 mini for content consumption. When I originally bought it, I immediately teamed it with the iPad mini, assuming the latter would be the main device on which I’d watch my favourite YouTubers.

Not so. In fact, I used the iPhone 13 mini more than any other device for watching stuff. It’s a relatively small screen compared to most smartphones on the market at the moment, but you quickly get used to it, and the phone is never that far from your face, which is a fact that’s easily overlooked.

Yes. I even ran the beta on it for quite a while, and although that experience was rather frustrating at times, it wasn’t the final release, and I should have known better.

The iPhone 13 mini benefits from all of the latest iOS 16 features and, in my experience, runs perfectly on Apple’s latest mobile operating system.

Is the iPhone 13 mini too expensive?

Bearing in mind the frustrating price hikes we’ve experienced (particularly in the UK) from Apple this year, that makes the iPhone 13 mini a very well-priced phone. Remember – you’re getting flagship performance in one of the best-built and best-manufacturer-supported smartphones on the market.

I wouldn’t hesitate to buy one today if I wasn’t a tech reviewer.

The human brain is a funny thing. When I finally laid my iPhone 13 mini to rest in October, I fully expected to be put off immediately by the iPhone 14 Pro Max and its gorgeous-yet-mahoosive display.

In reality, I’ve taken to it very quickly. The switch from the iPhone 13 mini’s pocketable dimensions to the biggest smartphone Apple offers has been relatively painless. Although, I do occasionally miss the one-handedness offered by the former.

That’s the beauty of the iPhone 13 mini and it’s also why I wouldn’t have bought the iPhone 14 Pro Max if I wasn’t doing this for a living. I had no reason to make the switch; I loved the size, performance, camera, and absence of finger gymnastics when operating the iPhone 13 mini one-handed.

This is why my switching to the big iPhone shouldn’t influence your decision-making process. I did it because I had to for my business, but if you’ve been pondering whether or not to buy the iPhone 13 mini in 2022, I can say categorically that it will be one of the best purchasing decisions you make this year.

Still got unanswered questions about the iPhone 13 mini? Pop them in the comments section, below!