Is the iPhone 13 mini Too Small?

Is the iPhone 13 mini Too Small?

I forget who asked the question, but it was a good one.

“Do you think the iPhone 13 mini is too small?”

This was in response to my recent accident involving an iPhone 13 mini and a brand-new 16-inch MacBook Pro.

In case you missed it, the MacBook Pro lost the fight.

That question stopped me in my tracks. Because it also referenced the time I inadvertently threw my iPhone 13 mini down the toilet.

Oh, and the time I knocked it off a treadmill.

Is it too small?! Is that why I keep flinging it around here, there, and everywhere?

I’m not that clumsy (honest)

Like everyone, I’ve gotten myself into a few scrapes. I’ve broken things, scratched stuff, and dented more than my pride on several occasions.

For instance, this is a photo of me having just hit myself in the face with a lighting tripod. 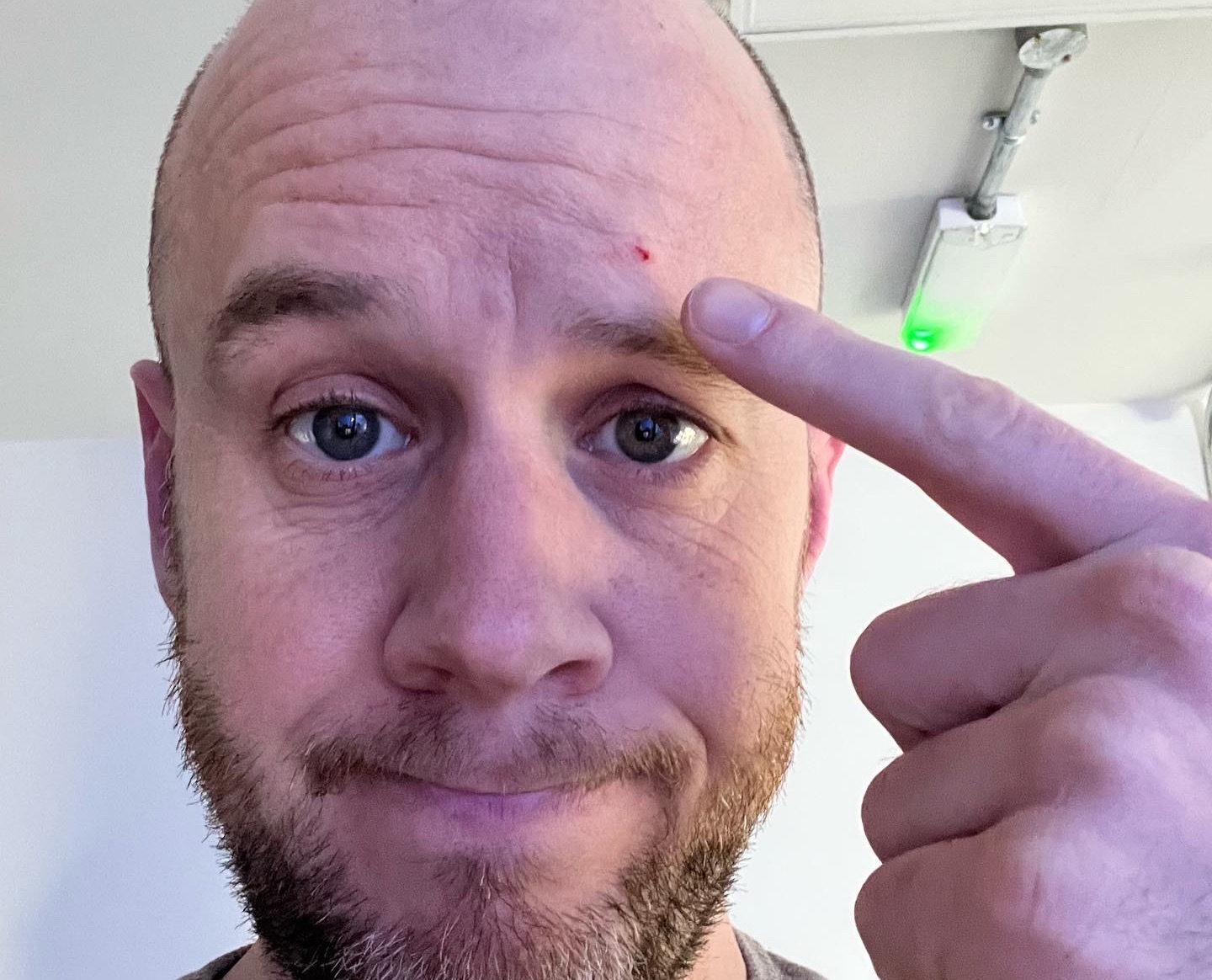 But I don’t consider myself to be particularly clumsy. On the contrary, I always carefully place my tech on rough surfaces, wrap my MacBooks in multiple layers during transportation, and nudge anything that’s resting precariously on the edge of a table away from imminent danger.

So why have I dropped the iPhone 13 mini so many times?

The first instance was relatively straightforward. Having wrapped my new iPhone in a cloth (see?!) before placing it on the shelf of a treadmill, I subsequently forgot it was there after a gruelling 5K.

After regaining my breath and most of my consciousness, I reached out to grab the cloth.

I’ll let you figure out what happened next.

The toilet incident is far harder to explain. After placing the iPhone carefully on top of two towels that were resting on a towel rail, I somehow caught it with an outstretched arm, flinging the poor little thing into the air and heading towards a rather unpalatable destination. I still have no idea how this was even physically possible, given the location of the towel rail and the absence of any need to fling my arms anywhere in that environment.

But the MacBook Pro accident is the one that has bothered me the most, and it’s definitely the one that justifies the question asked at the start of this blog post.

All I did was reach out, and grasp the iPhone 13 mini, which was sitting next to my laptop. In a split second, my grip on the device was all but eradicated when the MagSafe wallet slipped from its position on the back of the iPhone. This sent the little phone hurtling towards the side of my 16-inch MacBook Pro with aluminium-chipping force.

That has never happened to me with a phone before.

It’s worth highlighting at this juncture that the iPhone 13 mini has suffered zero damage following these three accidents.

Apart from the usual hairline scratches on the screen, there are no marks on the aluminium band that surrounds the phone, and no dings, dents, or gouges anywhere else.

It really is remarkable and a testament to Apple’s design team.

I’m not for one minute suggesting that you should be as careless as I appear to have been thus far, but if you’re treating your iPhone 13 with kid gloves, my experience suggests that you can probably rest a little easier.

So, back to the big question: is the iPhone 13 mini too small?

I don’t think it is. I think the problem here is my choice of ‘case’. You see, I sang the praises of the MagSafe Wallet a little while ago not just for its card-carrying abilities, but for its semi-case-like functionality.

With hindsight, I’m not so sure I was right. Although I made it pretty clear that the MagSafe Wallet offers nowhere near the same level of protection as a proper case, I failed to consider the inherent issue with magnets.

They detach. And, because the iPhone 13 mini is so tiny, it’s far too easy to accidentally detach the MagSafe Wallet when retrieving your phone from the surface of a table.

I therefore think the issue I’m facing is the lack of a proper case which, when combined with the iPhone 13 mini’s form factor is, clearly, a recipe for occasional disaster.

It’s important to note that this could be the end of the line for the iPhone mini, anyway. Reports have long suggested that poor sales of the iPhone 12 mini sealed its fate long ago.

I, for one, desperately hope that isn’t the case, because even if it is a little too small, it remains the best phone I’ve ever owned, and I really don’t want to go big again.

Imagine the damage the iPhone 13 Pro Max would have done to my MacBook Pro.