Don’t worry – the title of this review does not indicate that I’ve decided to ditch Apple’s tiny smartphone in favour of something much larger. Far from it.

But I was immediately interested in the Galaxy S22 Ultra, as soon as it was announced during Samsung’s unveiling of their latest smartphones last month. To all intents and purposes, it looked like a Galaxy Note, which is a device I’ve always lusted after but never purchased.

Well, it may not technically be the new Note, but the S22 Ultra has been in my possession for long enough to pitch it against the biggest iPhone on the market – the iPhone 13 Pro Max. 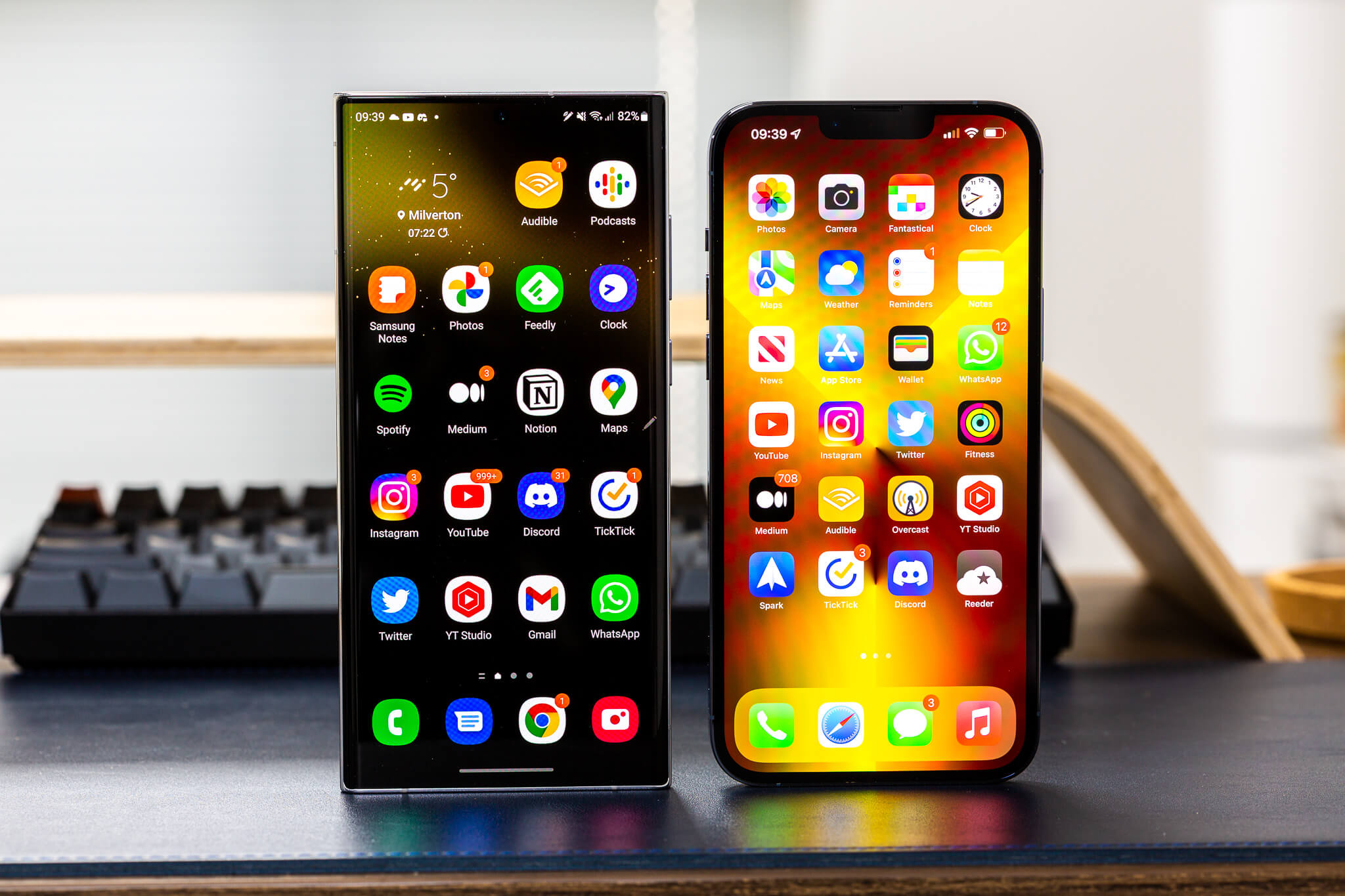 Apple’s base model also comes with 128GB of storage, but just 6GB of memory (although Apple remains characteristically tight-lipped about this). And while the iPhone is non-upgradeable in terms of RAM, the S22 Ultra can be upgraded to 12GB if you pay £100 more.

So, the S22 Ultra is a more expensive device, but there are some perks on offer from Samsung. Buy one of their flagship smartphones today, and you can claim a free pair of Galaxy Buds Pro (worth £219) and a free year of Disney+.

Samsung also offers a wonderful trade-in programme where you can grab up to £350 off the price of your new S22 Ultra by handing over your decrepit old S[insert any model number here]. Apple offers a similar trade-in, but it’s nowhere near as generous.

While the S22 Ultra might look good on paper, it’s made a far more tempting proposition thanks to the smart carrots dangled by Samsung.

I noted in my original S22 Ultra review that it is a stunning looking device, and it really is. The product photography and press shots don’t do it justice; it indeed looks rather bug-eyed with those slapped-on lenses to its rear.

But in person, it looks elegant and almost Apple-like. There are no unnecessary lines, bulges, or flourishes. They’ve nailed it. 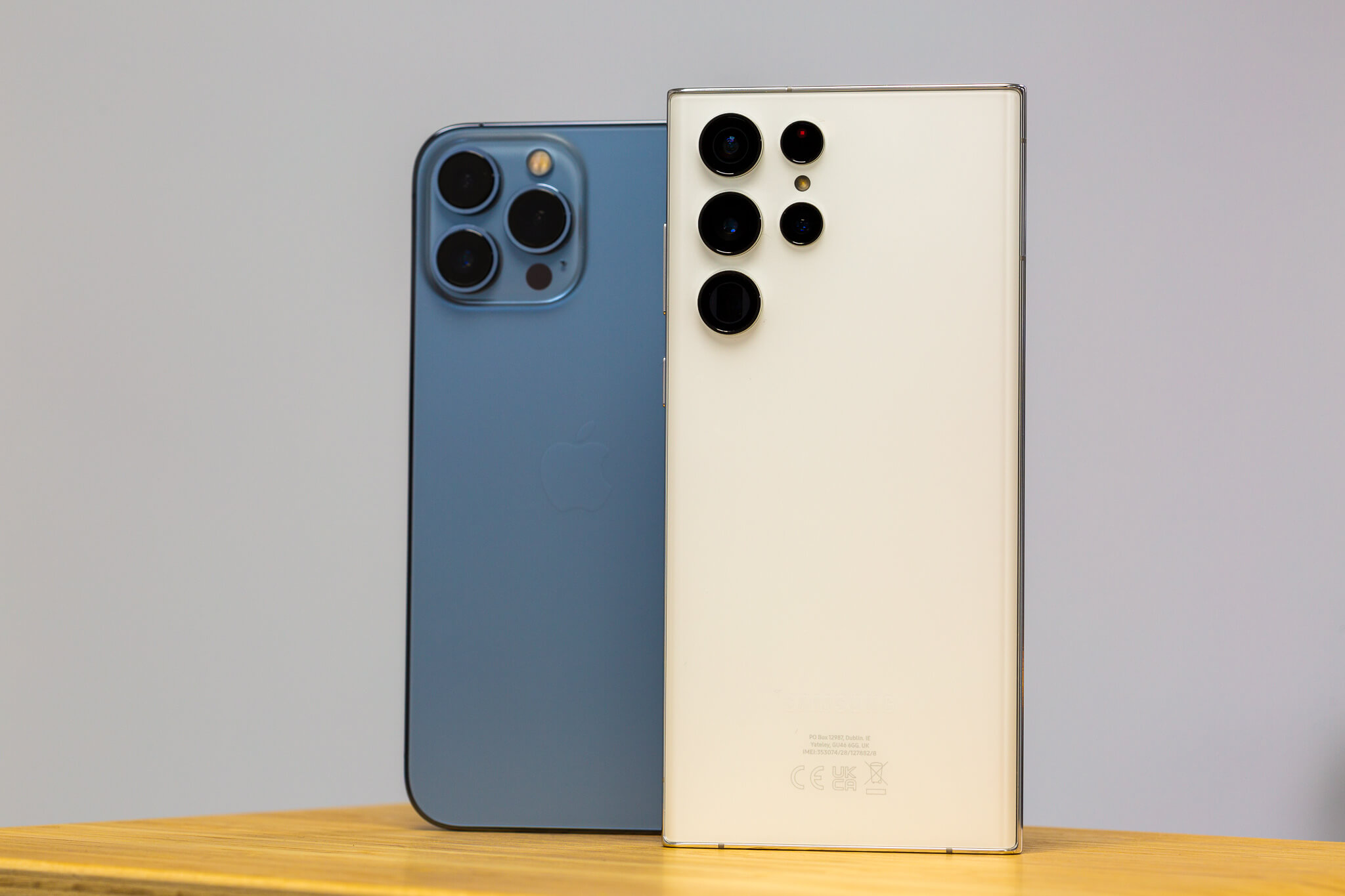 The S22 Ultra feels great in the hand, too, thanks to those rounded edges. This does cause problems with the screen – which I’ll get to soon – but it’s a far more comfortable phone to hold than the iPhone 13 Pro Max.

Both phones share similar materials; shiny, fingerprint-magnet aluminium edges meet a pleasingly matte finish on the rear of each device. The colour choices are relatively muted on both, but that seems to be the raison d’être for flagship phones these days.

Unfortunately, it appears the darker shades on offer from Samsung are beginning to exhibit some pretty poor scratch resistance, as demonstrated below (he’s not the only one):

Anyone else having this issue?

That’s certainly concerning. I opted for the white version which is thus far unscathed, but the above should serve as a warning to anyone eyeing up the black version.

By comparison, the iPhone is typically Apple. That is to say, it feels as tight as a drum and incredibly premium.

Samsung phones have come a long way in terms of design, and the build quality between these two devices is almost on par, but emerging images like the one above do spoil the party somewhat (despite the fact that 99% of owners will place theirs straight into a case).

The iPhone still wins – just – when it comes to design, but Samsung is hot on its heels.

I’m not the person for benchmarks, therefore I’m going to give you a super simple, bullet-pointed breakdown of what you need to know about these two phones:

The iPhone 13 Pro Max performs like an iPhone – it is biblically quick and will remain so for many years. So, no worries there. 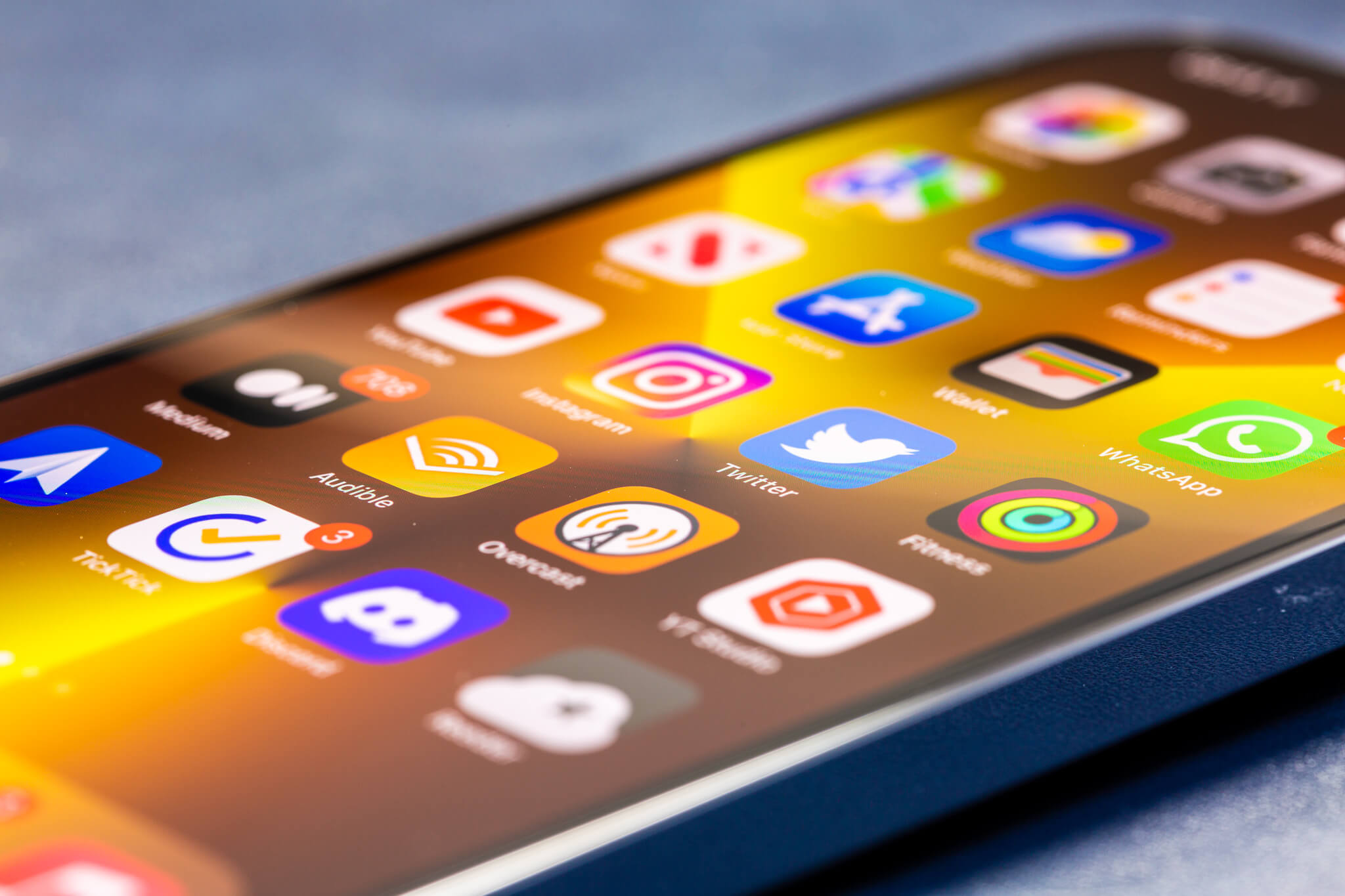 The S22 Ultra is a different animal thanks to the chip swapping, but it isn’t as bad as you might think. I have the Exynos version, but my experience thus far has been pretty satisfactory. There are a few judders here and there when opening and closing apps and scanning particular web pages, but nothing that dents the usability.

That said, I’m not a power user. If you are, you might feel short-changed for being dealt the Exynos version simply because of where you live. You are, after all, paying the exact same price as those who are lucky enough to get the Snapdragon 8 Gen 1.

I have no idea why Samsung does this, and why they don’t see it fit to simply give everyone the best possible experience, but if you’re a general, ‘normal’ user like me, you probably won’t feel short-changed. The S22 Ultra still feels like a quick phone.

Alas, the iPhone 13 Pro Max continues the trend of being absolutely unbeatable when it comes to fluidity and a complete lack of any form of lag, judder, or unexpected crashes.

The S22 Ultra’s screen is the best smartphone display I’ve ever used. Set it to the highest resolution of 3088 x 1440, and it is sharp enough to erase pixels from your world, forever.

It’s also super bright, and thanks to something called ‘Vision Boost’, the S22 can crank its screen up to a stonking 1,750 nits of peak brightness, versus the 1,200 nits of the iPhone 13 Pro Max.

Combine that with Samsung’s typically vivid take on colour management, and you’re left with a visually pleasing screen that can be seen perfectly clearly, no matter the ambient light.

It really is stunning. But it also curves at the edges, which takes some getting used to. This results in a massively expansive screen, but some light fall-off on those edges if you’re looking at something with a white background. Not a deal-breaker, but a little bit irritating.

Don’t get me wrong – the iPhone 13 Pro Max still features a wonderful screen; that’s what we expect from Apple. But it looks rather lifeless compared to the S22 Ultra. It’s just a shame the latter doesn’t have True Tone. Add that, Mr Samsung, and you’re a country mile ahead.

iOS versus One UI

Apple has added widgets, convenience features, and a whole raft of under-the-hood improvements to make iOS the most trusted, reliable, and easy-to-use mobile operating system out there.

But it is a bit boring.

This is why I’ve always enjoyed flirting with Android. You can tweak it more, and have fun with the app screens without tearing your hear out in a Jiggle Mode-induced fit of rage.

Samsung’s take on Android is called One UI and, thankfully, it is nowhere near the mess we saw with their previous butcherings of Google’s mobile operating system. In fact, I really like it. If you turn off the annoying navigation bar at the bottom of the screen and switch on the iOS-like swipe gestures, it feels like home.

There are some annoyances. For instance, tap-to-wake is slower to respond than iOS, but I can forgive that when Samsung also includes magical features like an ultrasonic fingerprint reader under the screen (this is more useful than you might think).

In fact, I can forgive any of Android’s quirks simply because of the aforementioned ease with which you can rearrange your screen, and the simply brilliant swipe-right-to-display-Google-News (I’m sure it has a better name than that). This is sorely missing from iOS and always seems to feed me with highly relevant content.

I always found Android of old – particularly Samsung’s various takes on it – to be unnecessarily customisable and scarily unpredictable. Not any more.

Tim – you’ve got some work to do if you’re to stop me picking up this S22 Ultra more than the iPhone.

Let’s see how these two perform against one another when it comes to, arguably, the most important element for many people – the camera.

It should be noted that the following images are straight out of both cameras, but have been compressed a little for the web.

First up, is portrait mode. 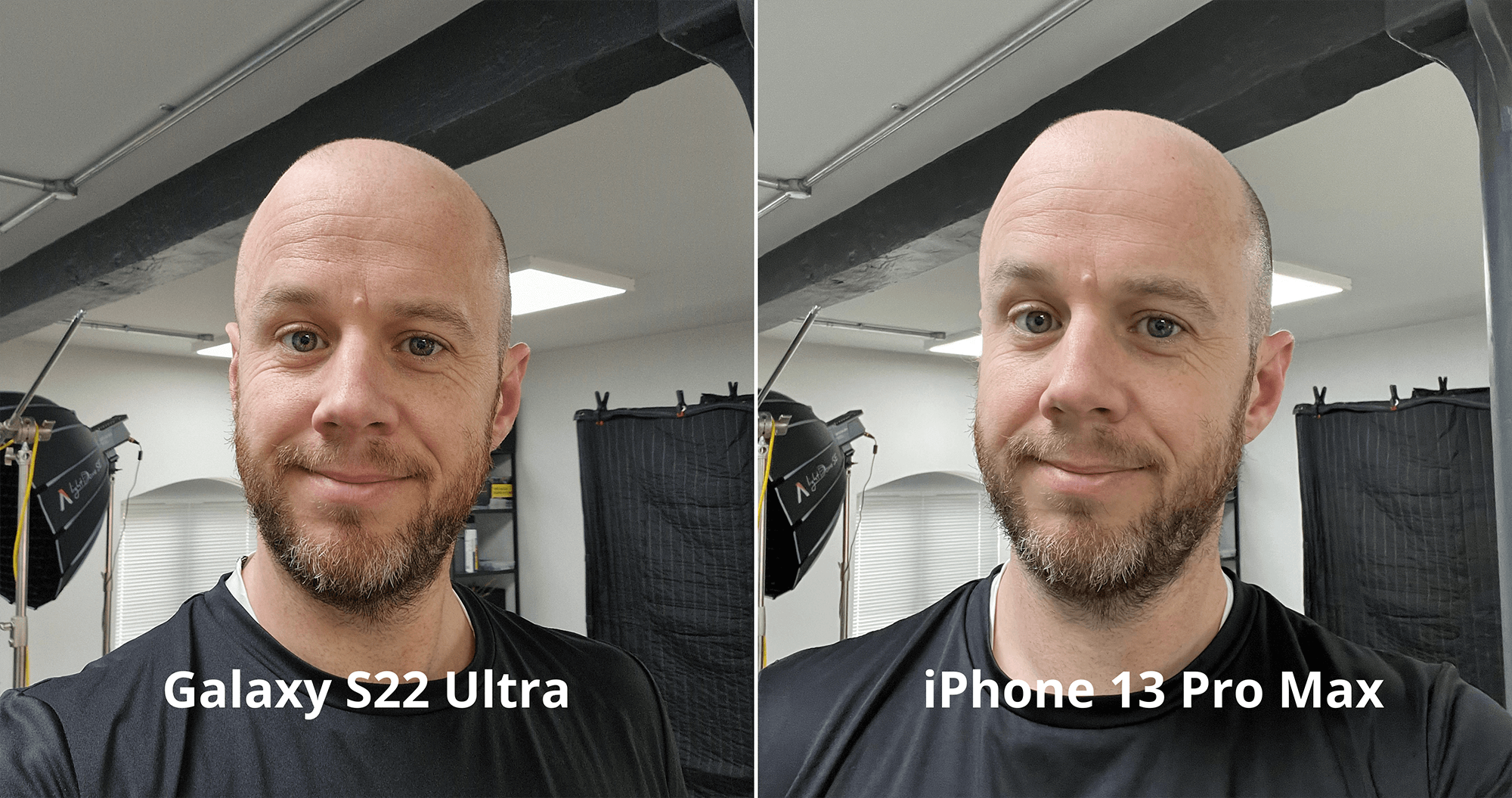 The S22 Ultra’s front-facing camera is immediately sharper, if a little noisier than the iPhone’s effort. My skin tone also looks more natural and there’s a tiny bit more bokeh that softens the background just enough.

Both cameras are capable of macro photography, which is a wonderful addition and useful in far more instances than just super close-ups.

In the photo below of Eddie, we see the true result of that sharp Samsung lens. 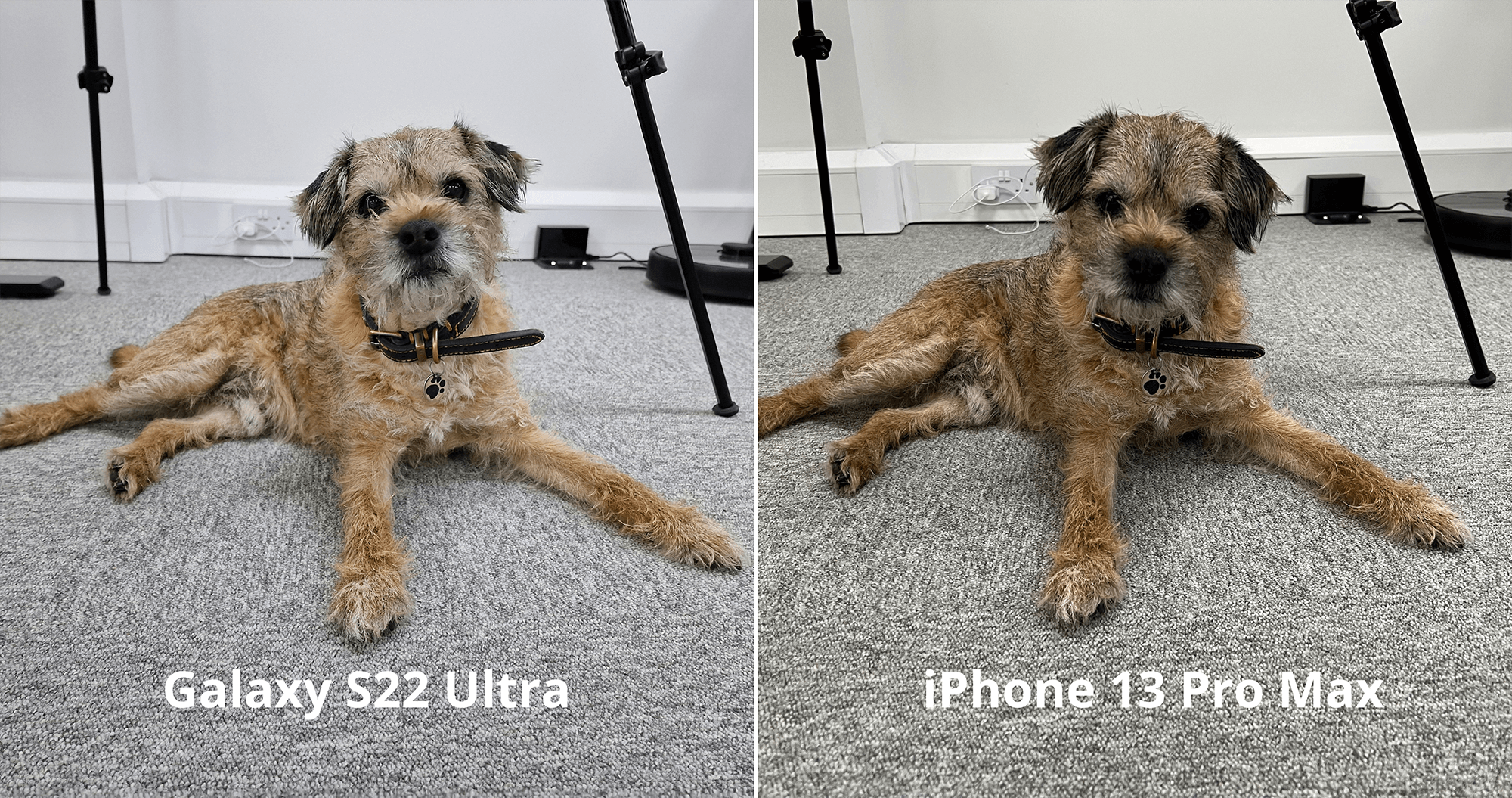 The S22 Ultra isn’t over-sharpening these images as far as I’m concerned; they just ‘pop’ far more than the iPhone’s photos. Samsung has also done a much better job of balancing the highlights and shadows, leaving the iPhone snap of Eddie a rather dark, underwhelming mess.

This next one really took me by surprise. 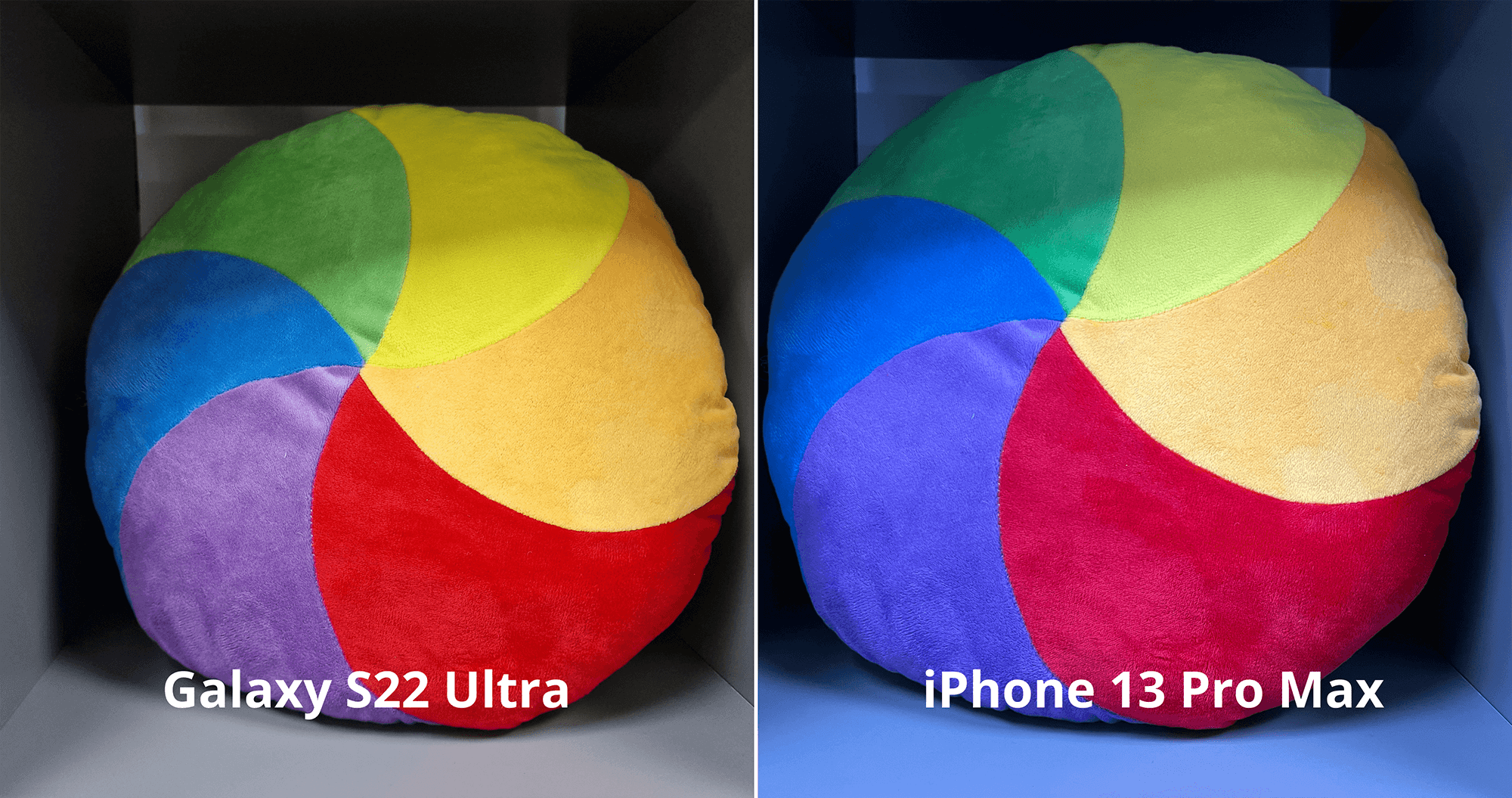 This is an incredibly poor effort on the iPhone’s part. Quite why it has turned the entire image so horribly blue is anyone’s guess, but it is a dreadful choice of white balance. The S22 Ultra, on the other hand, has nailed the white balance and provided just enough saturation to bring those colours out without it being jarring.

There’s no contest here. Both images were shot at 3x, handheld. The S22 Ultra absolutely nails what is a relatively tricky subject, while the iPhone… well – just look at it. Once again, it has screwed up the white balance and doesn’t offer anywhere near the edge detection displayed on the S22 Ultra.

When it comes to photography, the winner for me is the Samsung – big time. It is a far better camera than the iPhone 13 Pro Max. Embarrassingly so, at times.

I expected more from the big boy iPhone.

Further examples and a comparison of the video capabilities will feature on my YouTube channel next week, so make sure you subscribe here.

I can easily get two days out of the S22 Ultra, despite the concerns over its Exynos chip and supposedly poor battery life. It’s a great performer.

On Tuesday, the big iPhone left its charger at 5am with 100% proudly displayed next to the battery icon. By 11:30am on Thursday morning, it still had 23% remaining. It hadn’t been anywhere near a charger in-between that time.

I genuinely thought there was a bug in the version of iOS installed on this iPhone 13 Pro Max when it first arrived. During my first full day with it, there was still 83% remaining by 9pm. I’ve never seen that happen with a modern smartphone.

Alas, there was no bug – this is exactly how good the iPhone 13 Pro Max’s battery is.

The S22 is superb when it comes to battery life. But the iPhone 13 Pro Max – if you can contend with the weight and size – will change the relationship you have with your smartphone forever.

I’ve left any mention of the S22 Ultra’s S Pen until the conclusion for two reasons:

I need longer with it, but I’m sad to say that the main reason I always lusted after a Galaxy Note is likely to spend most of its life stowed away. So, the S Pen simply isn’t a point of differentiation for me (I’ll let you know if that changes). 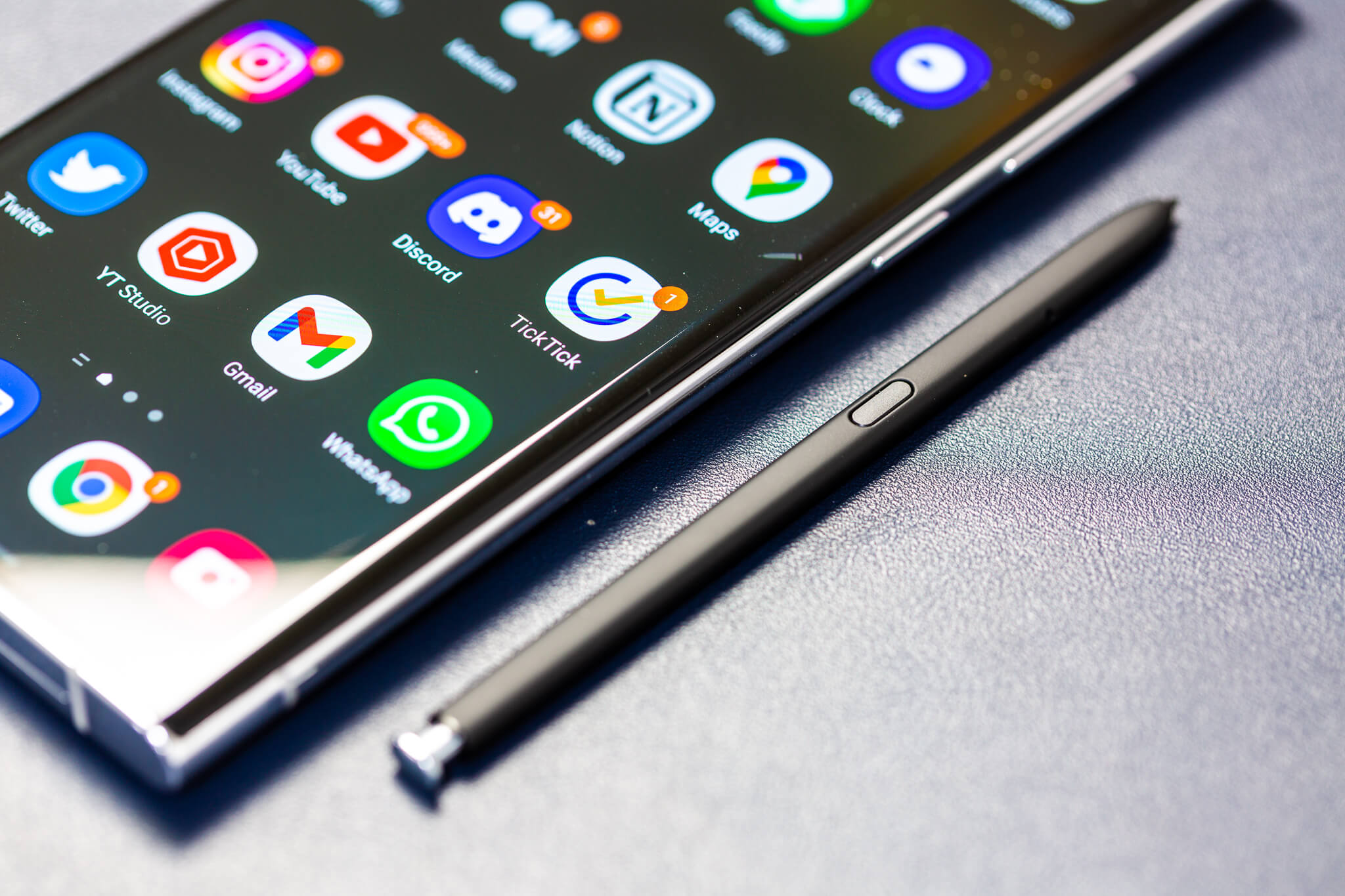 Choosing between these phones is actually quite straightforward. If you’re an Apple ecosystem kinda person and love the ease with which you can transfer stuff between devices, and the way in which they all communicate with one another, get the iPhone 13 Pro Max. That battery alone will blow you away.

If you’re not nestled within Apple’s walled garden, I would buy the S22 Ultra. The generous deal on offer from Samsung, combined with superb build quality (just avoid the black one), a great OS experience, the best screen you’re likely to see on a smartphone, and that iPhone-smashing camera make it a brilliant purchase.

Samsung – you have some work to do (consolidate the chip mess, sort out the scratchability, and add Tue Tone), but you’re fast becoming my favourite smartphone manufacturer.

iPhone 13 Pro Max provided by the lovely team at reboxed. Do your bit for the planet while finding the best possible deal on refurbished smartphones (use code MARKELLIS15 to get £15 off).