Last week, I received my iPhone 13 mini. You can catch my full, unfiltered reaction below:

I love it already. The ability to single-handedly use a phone without any form of drop-inducing finger gymnastics is a genuine delight.

It’s a wonderful little phone. But I’ve had one big concern ever since I received it: the battery life.

The iPhone 12 mini was renowned for its poor battery performance. According to several reviewers and YouTubers, it would struggle to make it through a busy day, and if your work involved lots of time away from any form of charging port, you were in for a pretty hairy ride.

So, to see if the new iPhone 13 mini battery could fare any better, the first thing I did was take it on a two-day jaunt which involved precisely zero sleep, no power, and a five-hour hike up Snowdon in North Wales.

In 2020, myself and two friends were due to take part in a night hike for the brilliant Mind charity. The destination was Snowdon, the highest mountain in Wales, at which we’d climb the 1,085 meters to its summit, along with around 300 other fundraisers.

As we all know, 2020 didn’t quite turn out the way any of us had planned, and the hike was postponed. It was finally rescheduled for Saturday 25th September, 2021 – the day after my iPhone 13 mini was delivered.

This seemed like the ideal opportunity to put my new little phone to the test. How would it cope being away from a wall socket for nearly 48 hours? How long could it go without the need to attach my MagSafe Battery Pack?

My plans to document the walk

I had big plans to document the entire walk with the iPhone 13 mini – Casey Neistat style.

That didn’t happen for two reasons.

Firstly – and as much as I deeply love Neistat – you quickly realise that vlogging is damn hard work. It’s just a lot easier not to do it. And when you’re taking part in such an epic challenge with 300 other people, finding the time, space, and courage to ramble on about yourself into a smartphone camera isn’t particularly easy.

The second reason there is no meaningful documentary from my Snowdon hike is because that simply doesn’t reflect how I use my phone.

I want to provide buying advice that is relevant for people like me, and the most relevant use case I had for my iPhone 13 mini this weekend was for it to take the occasional photo and last as long as possible on a single charge.

That’s why I came away with just eight photos and zero video footage.

But I did learn an awful lot about this tiny smartphone.

The iPhone 13 mini turned out to be a brilliant companion this weekend, and I think it’s best to measure its performance in three key areas.

They are the only three things that mattered to me this weekend when it came to whatever smartphone I had to hand: battery life, form factor, and photo-taking capabilities.

I charged the iPhone 13 mini to 100% at 12:30pm on Saturday afternoon and immediately removed it from the MagSafe charging stand. As I always do for long jaunts away from power, I then immediately placed it into Low Power Mode.

Keep in mind that I was out in the sticks, and in an area where a cellular signal wasn’t always easy to come by. Although 4G appeared to be relatively well served across our hiking route, there were still plenty of dead spots, which meant the iPhone 13 mini would have been hunting pretty consistently for a signal – a classic battery killer.

I used the phone sparingly throughout the weekend, but I didn’t treat it with kid gloves. While sat in the back of the car on the journey to our destination, I occasionally checked email, browsed my Twitter feed, and even watched a flyover video of the route we’d be taking on the mountain.

During the climb, I snapped a few photos, regularly checked for 4G, and even used the flashlight on a couple of occasions.

The iPhone 13 mini’s battery didn’t feel hampered in any way during that time. Given the conditions and what I was asking of it, it sailed through the task and meant I didn’t have to plug it into any form of charging point until I returned home at 10am. Indeed, I didn’t use the MagSafe Battery Pack once.

As noted earlier, I’ve fallen in love with the iPhone 13 mini already, and this is almost solely down to its size.

Anyone who has hiked significant distances with large smartphones – particularly where lots of elevation is involved – will know that it’s a pretty irritating experience. Unless you place the phone in your rucksack, it spends the entire time being entirely noticeable in your trouser pocket.

Not so with the iPhone 13 mini. This little beauty slips into the tightest of trouser pockets barely unnoticed and remains that way until you need to retrieve it.

One-handed smartphone operation during such walks is also vital, and this really is where the mini sings. There’s absolutely no need to use it with both hands, which is a blessing when you often only have one hand available. I never want to walk long distances with a big phone ever again.

I did want to take a couple of snaps, though, which brings me onto the photo-taking capabilities of the iPhone 13 mini. There are two images from the Snowdon trip I want to share with you (which have been taken straight from the camera with zero edits).

The first example was taken during sunset in Llanberis – a beautiful Welsh village at the foot of Snowdon. Shot straight into the sun with the 14mm wide angle lens on the back of the phone, it’s a great test for the iPhone 13 camera’s dynamic range.

It’s a typically ‘iPhone’ photo; it doesn’t exactly ‘pop’ off the screen. Despite this, the image processing has done an admirable job of dealing with a less than ideal composition. Sure, the shadows could do with being raised slightly to reveal some detail, but the end result accurately portrays the calm mood that evening (with just a tiny amount of added drama in the sky, thanks to that wide angle). 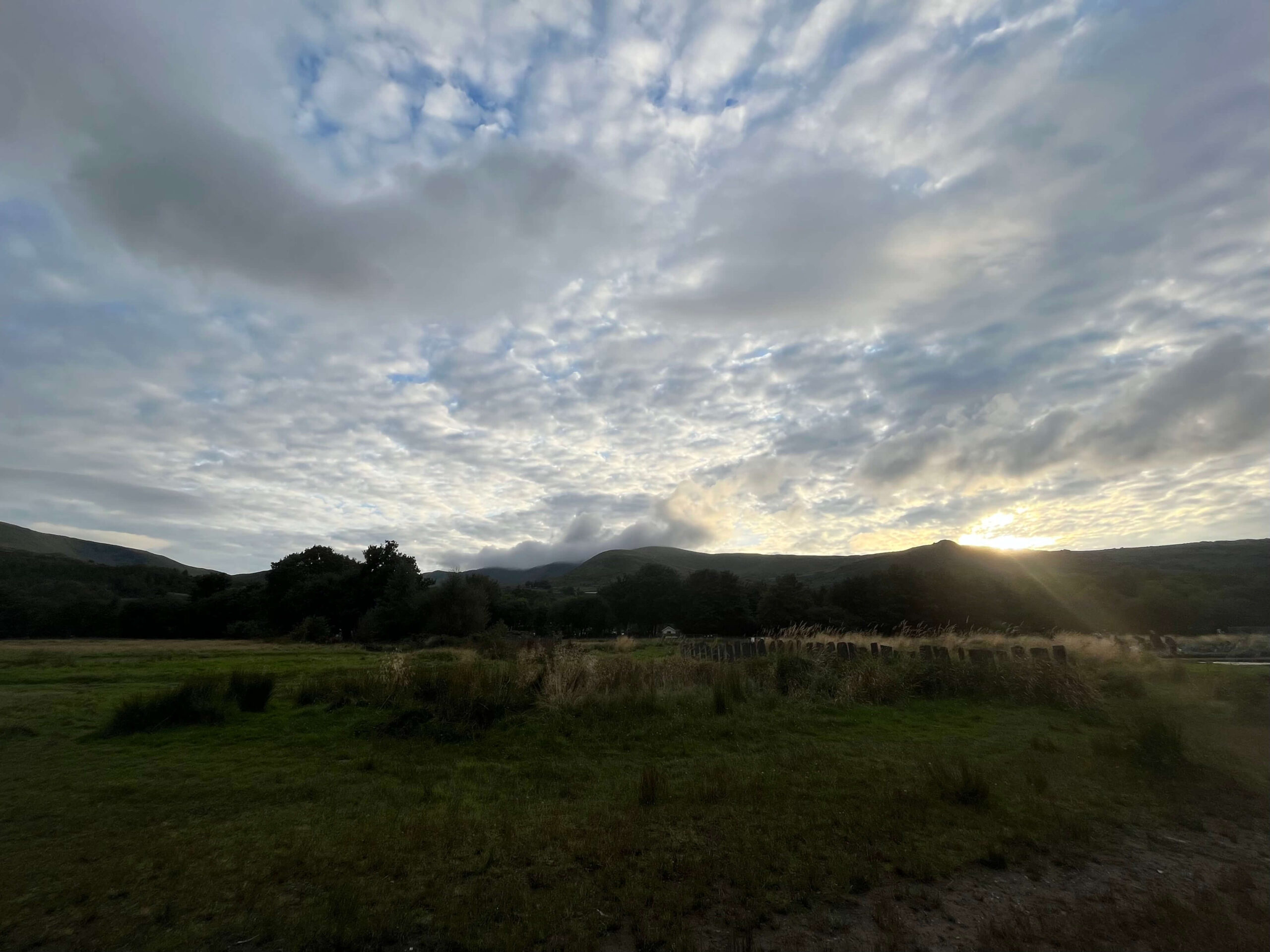 The second photo was taken during the hike, with the front-facing camera. Bar a couple of head torches behind us, this was taken in near darkness and therefore relied on the iPhone’s night mode to capture the image.

The result isn’t going to set the world on fire, but it isn’t bad given how little light was available. Sure, none of us in the photo are exactly pin-sharp, but the image captured does reveal how far that tiny front-facing camera has come over the last few years – thanks significantly to the computational prowess of the iPhone’s image pipeline. 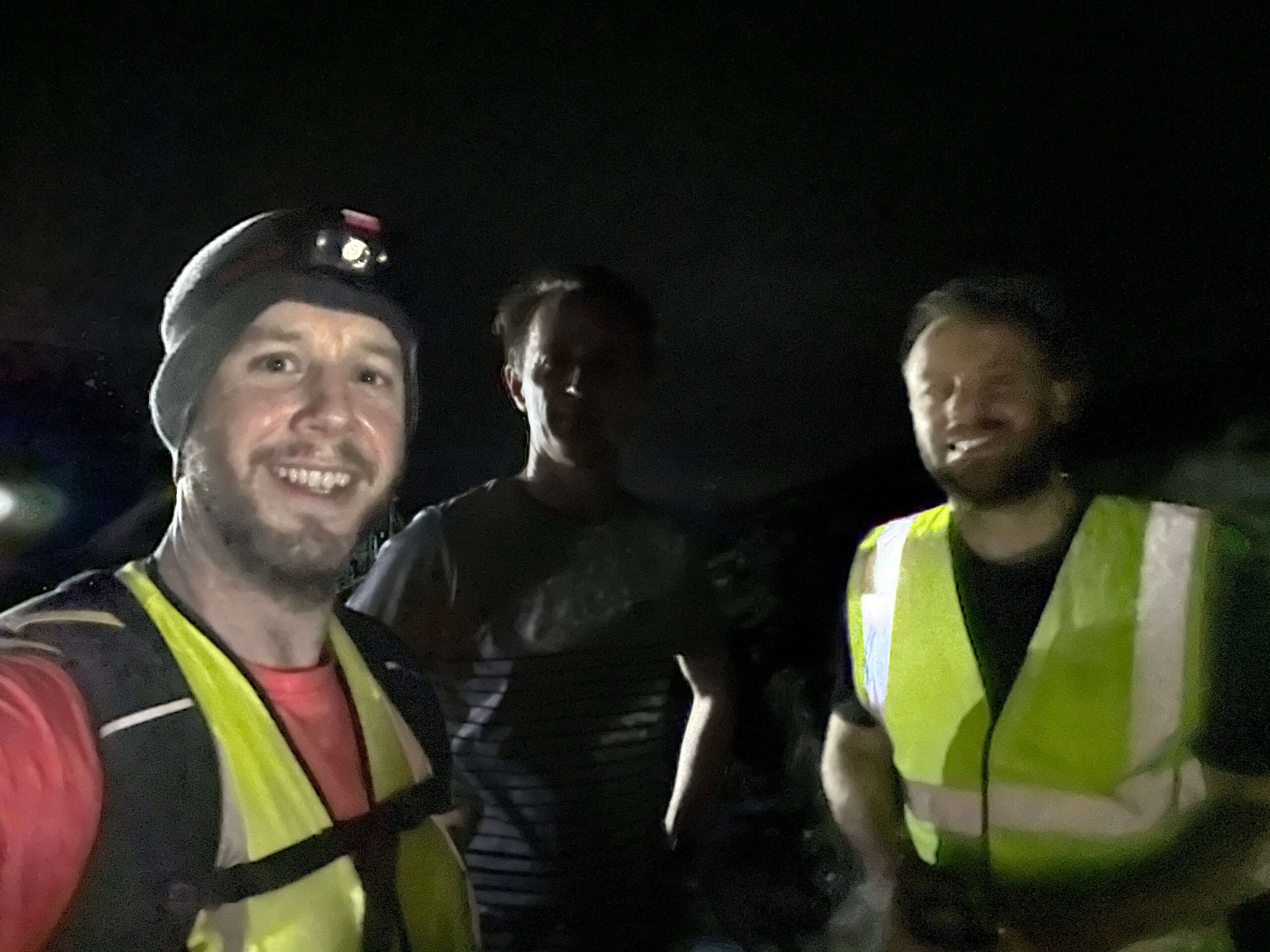 I didn’t make a special effort with any of the photos above. They’re all about as point-and-shoot as you’ll find. But that’s how most people use their phones for photography, and I’d much rather show you what the iPhone 13 mini produces when you just want to capture a specific moment.

The iPhone 13 mini performed brilliantly this weekend – I couldn’t have wished for a better smartphone companion during that gruelling climb.

The battery life was always going to be the focus for me, though, and I can confirm that it is really rather impressive – in these conditions.

How it performs in day-to-day, non-hiking life remains to be seen. But, as you know, I’ll report back on that front in due course!