Back in December, I revealed that my next Apple Silicon Mac would be an iMac.

As it turns out, I was a little off with that prediction because the next M1 Mac I purchased turned out to be the brilliant Mac mini.

If you’re yet to experience the M1 chip, the Mac mini is arguably the ultimate, no-frills expression of its brilliance.

But it isn’t an iMac.

In fact, nothing is. And the recent launch of the 24” M1-based iMac has proved yet again that this is the case.

I took delivery of mine last week, and these are my first impressions.

The unboxing experience (it’s worth noting)

I conduct minimal unboxing on my YouTube channel because I’m part of a generation that doesn’t really ‘get’ it.

But, every once in a while, a product comes along whose unboxing just demands to be filmed.

That’s exactly what I did when I received the new iMac. Something about the box forced me to grab my camera and ensure that this part of the ownership experience would make the final edit of my forthcoming first impressions video.

What strikes you immediately after retrieving the box from its shipping packaging is how much they’re leaning into these new iMac colours. Everything from the box art to the handle is adorned in your choice of iMac colour.

Then, you open the box and reveal a computer so neatly and considerably packed, it’s almost a shame to retrieve it from its slumber.

Apple has an entire team whose job it is to make the unboxing of its products a joy, and the iMac’s packaging is the ultimate expression of that. I genuinely enjoyed opening mine. 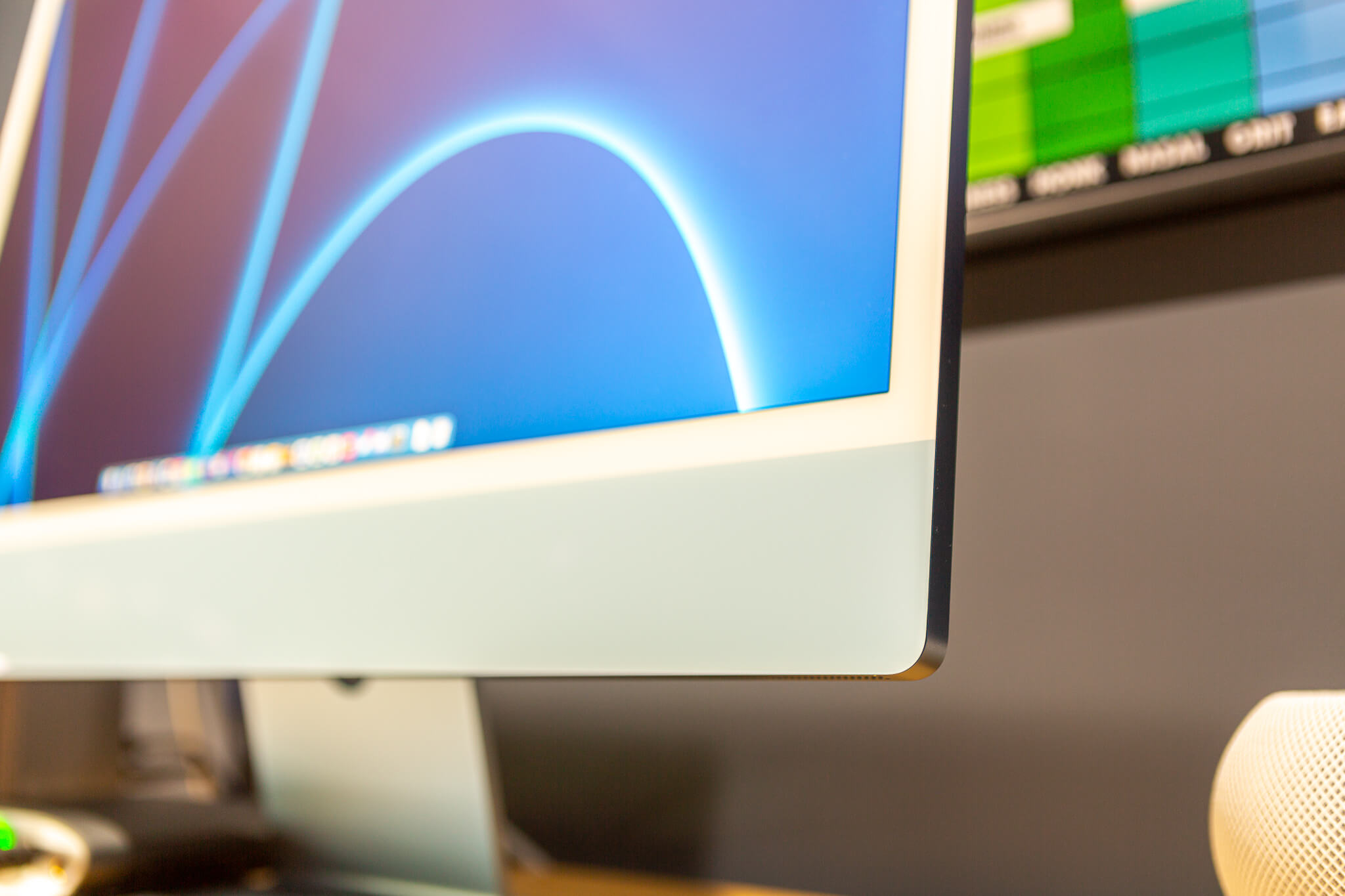 This is my opinion, and I know – like any design overhaul – the new iMac has as many detractors as it has fans.

The chin does indeed remain, but without it, this wouldn’t look like an iMac, and that’s vitally important from a product marketing perspective.

There’s no Apple logo on the front, which is weird – I’ll give you that. But there might be a very smart reason for its absence, which I’ll get to in a moment.

It’s thin – pointlessly thin, the old me might have said. But it doesn’t need to be any thicker thanks to that wonderfully efficient M1 chip.

It has white bezels. Bad for pros, we’re told. An absolute nightmare when it comes to reflections, colour judgement and the ability to cocoon yourself within your creative work. Or is it?

In my experience, the concerns over the white bezels don’t manifest themselves quite so readily – and this brings me back to that missing Apple logo.

Apple wants the iMac to ‘disappear’ when you’re using it. This enables their all-in-one to fit “in more places than ever”, according to their marketing team but also delivers a superb user experience that even the outgoing model struggled to deliver.

The white bezels, ultra-thin design, colour-matched chin and lack of the Apple logo leaves you with one thing to focus on: that beautiful screen. It’s a disappearing trick quite unlike any other, and while the concern over the colour choice for those bezels is entirely relevant if you’re someone who works with imagery, it appears to deliver the ultimate computing experience for everything else.

A quick note on the colour, too. I went for the blue version, and it’s a lovely, deep, rich hue. So lovely, in fact, that I wish I could see the back of my iMac more readily; this is a device that demands to be seen from all angles if you can position it in that way. 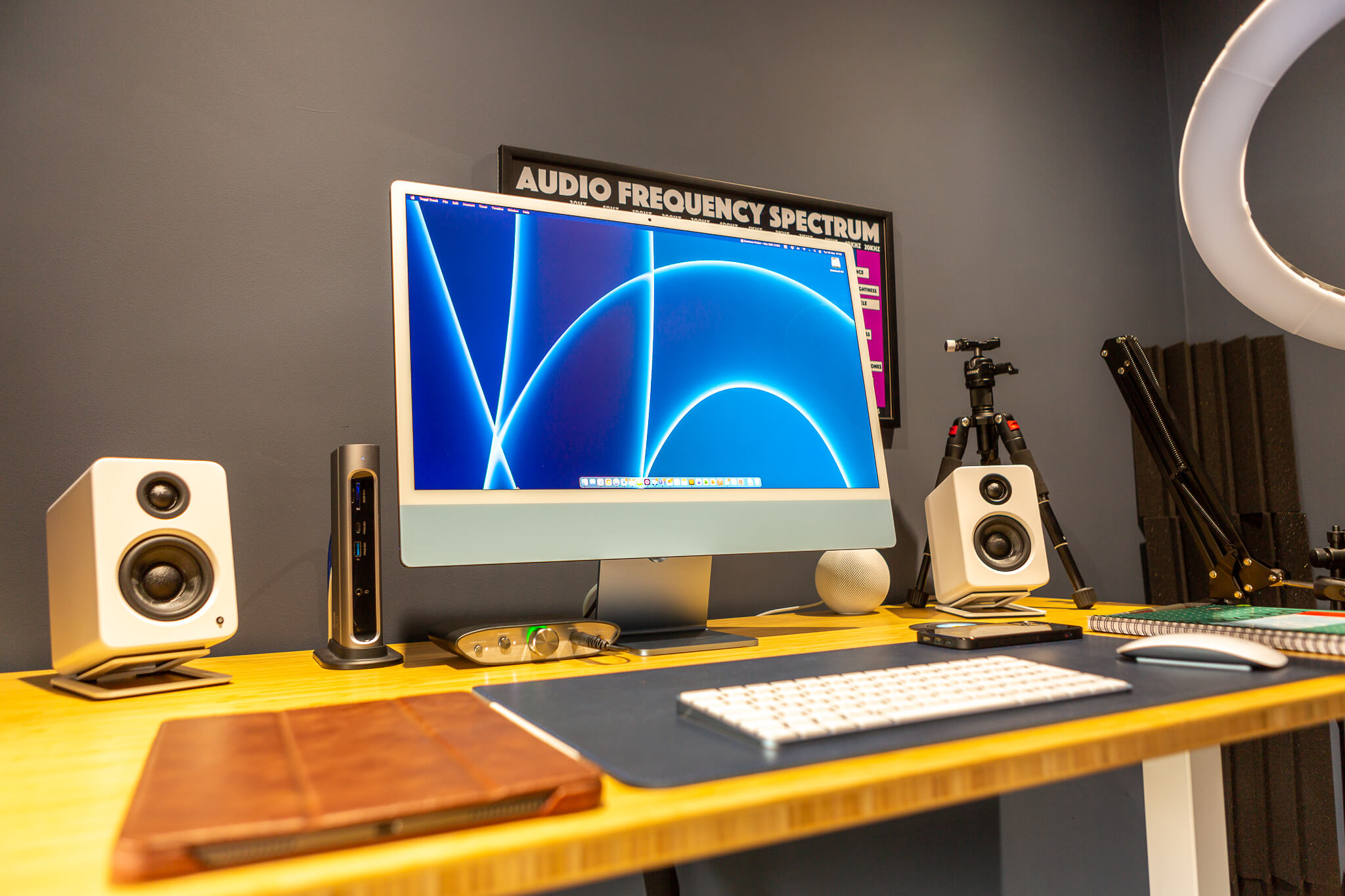 The new iMac is basically an M1 Mac mini shoved into a very nice screen.

The beauty of this combination and the market at which the iMac is aimed means you can buy a computer for your home that will make mincemeat of literally any normal task you throw at it while retaining enough power to enable more intensive work if anyone fancies it.

So, if you only need to use it for email, a bit of web browsing and throwing together the odd PowerPoint presentation, it’ll be the best computer you’ve used for the task. But if your daughter fancies dipping her hand into software development and your son decides to give video editing a try, the iMac will serve them perfectly, too.

This is the brilliance of the M1 chip. It’s like an ultra-high performance car which is also a cinch to drive to the supermarket. It can either be no-frills or highly performant, without either ability getting in the way of the other.

There are some odd spec choices, though. The 7/8-core GPU option remains (ignore this – RAM and storage upgrades are the only decisions worthy of your brainpower), and in order to get the maximum number of ports (the base model only comes with two), you need to spend more. The goes, inexplicably, for some of the colour options.

My advice for the choice of RAM remains, but whether you opt for the base spec iMac (the version I have) or a souped-up 16GB version with 2TB of storage, you’ll be happy with your purchase. Just buy as much as you can afford and enjoy the damn thing.

The 4.5K P3 retina screen on this new iMac is wonderful. But that was always going to be the case.

You cannot get a screen as good as this for the same money. Comparing the price of the iMac to the M1 Mac mini, you’re paying about £600/$600 for the screen. Show me a third-party panel that matches it, pixel-for-pixel.

In fact, don’t waste your time. There isn’t one.

I switched to an ultra-wide 34” monitor when the Mac mini became my daily workhorse. This was a marvellous decision, but now that I’m running a long-term test on the new iMac, I’ve had to relegate both the Mac mini and the huge screen to which it is attached to a video editing station. Everything else is being carried out on the iMac.

This has taken some getting used to. The 24” screen is a lot smaller than the MSI ultra-wide, but what it lacks in screen real estate, it obviously makes up for in sharpness, colour depth and brightness. And, in fact, there’s something rather refreshing about switching to a smaller screen; it keeps me focused on one task at a time, which is no bad thing. 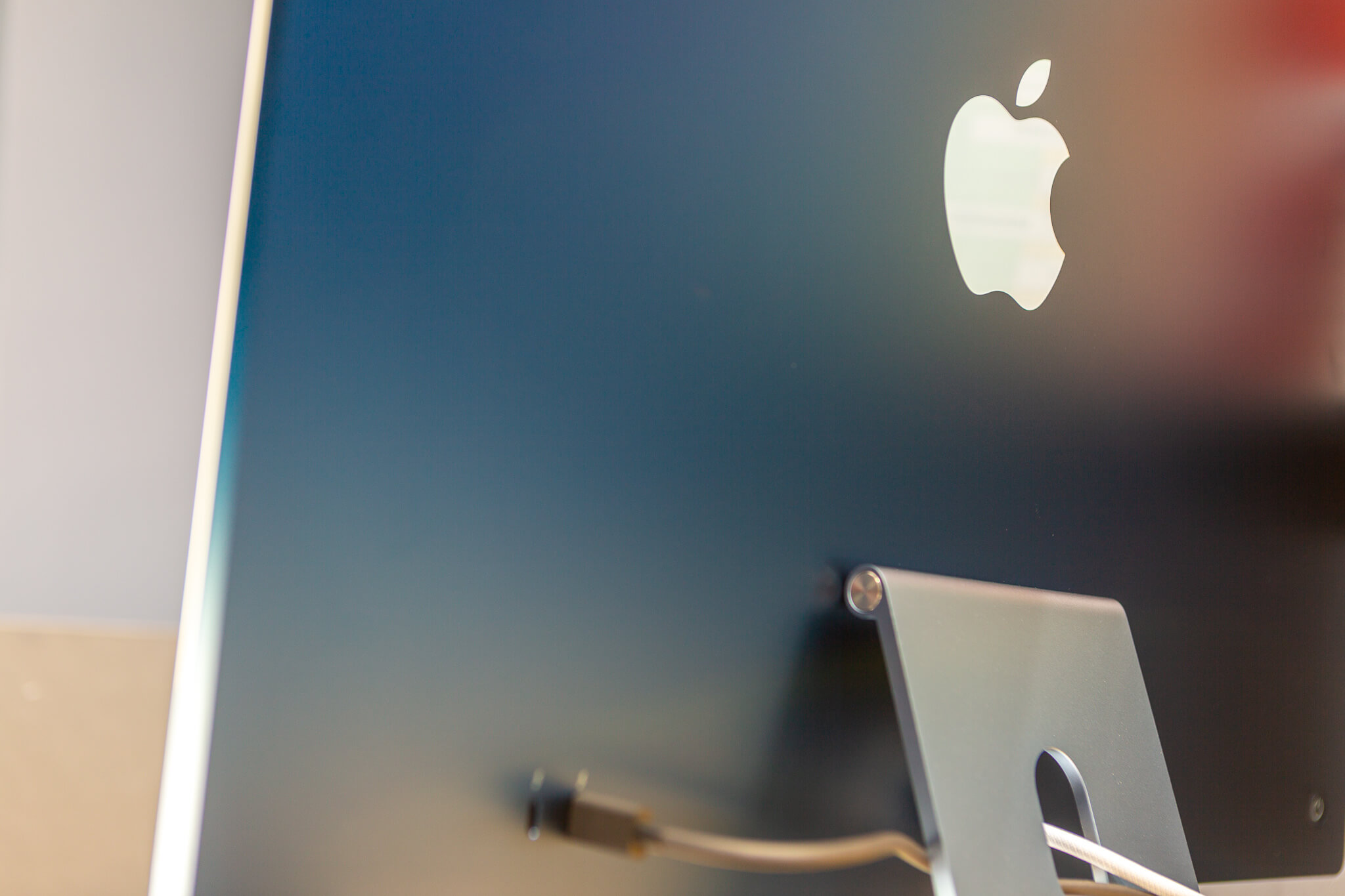 This isn’t the most in-depth review I’ve written, but it didn’t need to be. I’ve waxed lyrical about the M1 chip for months, and it once again sits at the heart of the story here.

I can’t think of another home computer which offers the same level of performance and screen quality at this price point. Unless you’re a die-hard Windows person, there’s no reason to look beyond the iMac if you have some money to spend and want an awesome computer for everyone at home.

Equally, if you’re a small business owner, the new iMac is a brilliant investment – particularly if the aesthetics of the machine are important to you.

The iMac I’m really hankering after is the replacement for the Intel-based 27” 5K version. I guess we’ll see that later this year, but the effortlessness, design perfection and masterful grasp of its target market turn the 24” iMac into a tantalising glimpse at what we have in store beyond this first iteration.