I’ve made no secret about my love for the M1 MacBook Air. It is, quite simply, the best laptop Apple has ever made, and if you’re thinking about buying one today – just got for it.

Regardless of what Apple does next with the MacBook Air (and they’re probably going to do something later this year), nothing will dilute the sheer brilliance of the current version.

Yes, the design has been around for aeons. Yes, there are big bezels around the screen. Yes, we have to make do with Touch ID rather than Face ID. And, yeah, the webcam is pretty crap.

But it is impossible not to fall in love with this thing.

Sometimes, that love makes you do very strange things.

A little while ago, I ordered some branded Mark Ellis Reviews stickers. Don’t worry – I’m not about to start relentlessly pelting you with links to my own merch (yet). This was just a fun little project to see what my logo looked like ‘in the flesh’.

I stuck one to my gear cabinet. Another was affixed to my iPad mini Smart Folio case. Two family members attached them to their rear car windows in a beautiful but ultimately fruitless display of brand devotion.

Then, I decided to stick a couple to my M1 MacBook Air.

I’m aware that lots of people attach stickers to their laptops; in fact, it’s a very common practice in the field of MacBook Air ownership; perch yourself in practically any coffee shop and you’ll spot at least one sticker-adorned, battered version of Apple’s cult classic.

I’ve never done it, though. Why spoil such a beautiful design with a bunch of unrelated brands, buzz words, and cartoon characters?

However, now that I’d broken the seal and applied one of my own stickers, I quite liked the newly customised look of my little MacBook Air.

…then it all got a bit out of hand

A few weeks later, I took it a step further. For whatever reason, I’d decided that the limited sticker collection on my M1 MacBook Air was starting to look a bit pathetic.

So, I hopped onto Amazon and bought a couple of random sticker packs. You (or your kids) may have encountered these yourself – they feature everything from rock bands to rude finger gestures, and, of course, the obligatory brand logos.

When my stickers arrived, I really went to town on my MacBook Air. It’s one of those processes you can’t stop once you’ve started; you add one, then another, then you sit back and wonder if you’re making a terrible mistake, but you continue, regardless, and add some more. And a few more to address the balance. And, finally, two more just because you spotted another area of uncovered metal.

As a result, the Mark Ellis Reviews logo on the lid of my MacBook Air is now joined by a ‘six colours’ Apple logo, Bart Simpson doing the ‘dab’, and, for no justifiable reason, the NASA logo. To name but three. 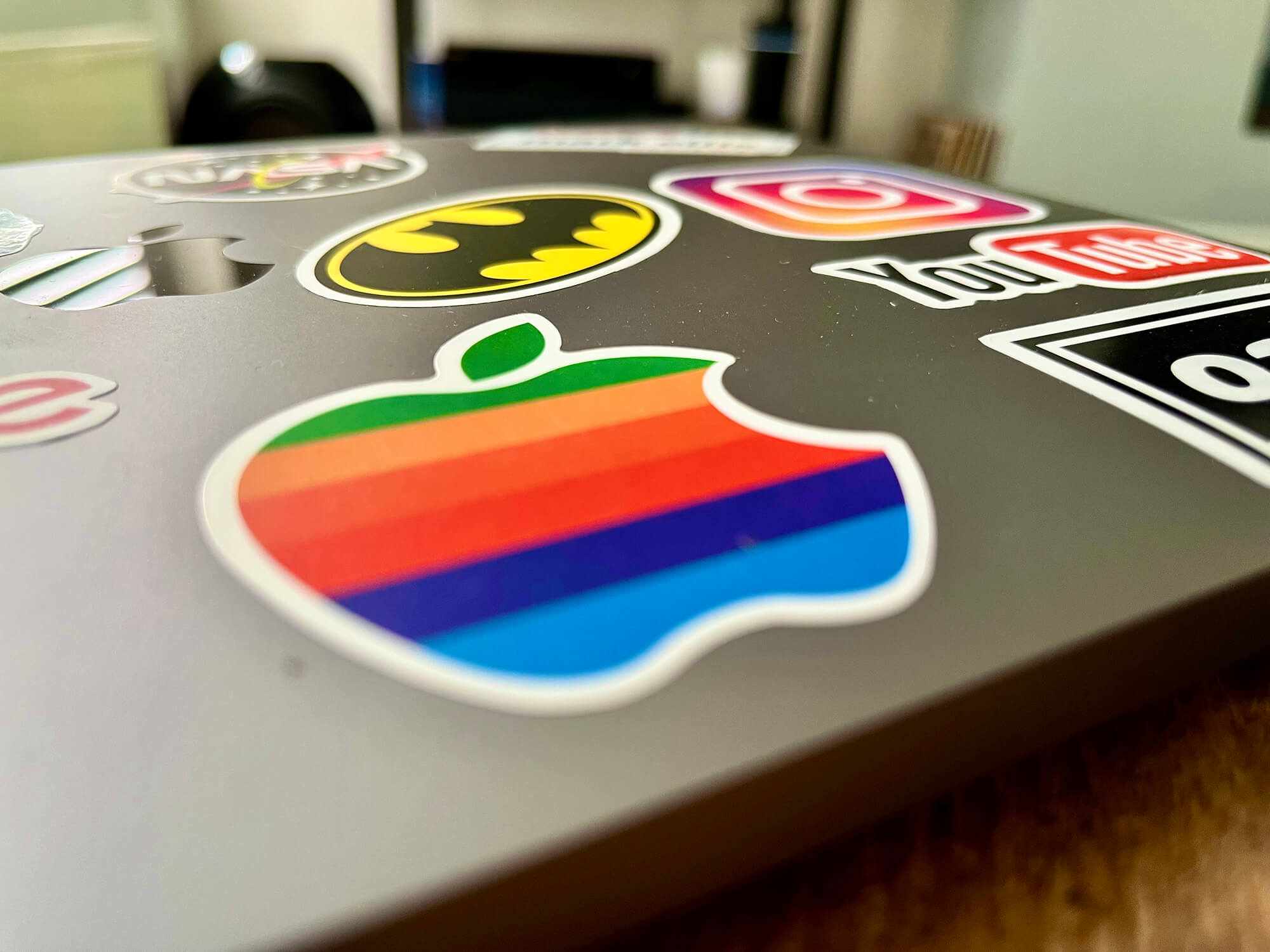 Weirdly – and completely inconceivably – I somehow love that laptop a little bit more.

Why do people do this?

It isn’t just the MacBook Air that is likely to have stickers plastered all over it by certain owners. Any laptop, tablet, or large smartphone that becomes an extension of the person using it will probably receive the same treatment.

However, there is something special about the MacBook Air. For instance, I’d never feel the urge to add stickers to my 16-inch MacBook Pro, iPad Air, or even my beloved M1 Mac mini. Doing so would feel completely wrong.

But on the MacBook Air, it feels right. As I’ve noted previously, mine has reached the stage of its life where it gets chucked about with near careless abandon. It has a few minor dents and scrapes as a result, and rarely gets placed in a protective case.

I couldn’t care less, though. This is the toughest kind of love.

The stickers add to the laptop’s embedded role within my life. It is now uniquely mine; there isn’t another MacBook Air on the planet with the exact same collection and placement of stickers; it’s as personal as a computer can be.

That’s why I love it even more.

What have you done to yours?

I’ve shown you mine – now it’s time to reveal what you’ve done to your MacBook (or any device, for that matter).

To show me your sticker-filled device, simply follow me on Twitter and send a photo. I’ll retweet every single one I receive!

Grab a copy of my Medium eBook!

Got the writing bug? Fancy becoming a successful Medium writer yourself? Find out how much I earn every month on the platform and how you can do the same in my popular eBook.