How to listen to Apple Music Lossless

How to listen to Apple Music Lossless

But what does any of this mean if you’re not an audiophile? Should you care? Will your AirPods Pro or AirPods Max sound better? What kit do you need to truly hear the suggested bump in quality offered by 24-bit/192 kHz ALAC audio?

There are, after all, a dizzyingly dull array of numbers and acronyms suddenly being thrown at Apple Music subscribers. And it ain’t all roses if you have a pair of AirPods Max.

I’m going to attempt to answer all of these questions today, and deliver some good news for owners of those expensive Apple cans.

This guide isn’t intended for audiophiles. If you number among that crowd, firstly, I’m jealous, but, secondly, I’d only suggest reading if you’re marginally interested in a high-level overview of Apple’s new high-quality streaming codec. Or if you’ve run out of things to read on the internet.

I’m not an audiophile. I’ve been getting into the headphone amp and DAC thing over the last couple of months, and I’ve been deeply interested in sound since I was a kid. But I’m not the best at listening analytically.

If you’re not an audiophile but you want to know what all the fuss is about with Apple Music, you’ve probably got a few questions. So, let’s get them answered.

What is lossless audio on Apple Music?

Up until today, the highest quality (indeed, only quality) available on Apple Music was in AAC format at 256kbps. This basically means it has been reduced in file size to preserve the storage on your device and the amount of bandwidth required to stream those files over the internet.

As a result, some of the detail in the music is lost. This stands to reason; a typical three-minute AAC file is about 6MB. A lossless audio file of the same length is around 36MB.

The term ‘lossless’ refers to the fact that the audio content within the piece of music you’re listening to hasn’t been compressed as heavily as an AAC file. There’s still some magic at play to make the file as digestible as possible, but it has little impact on the sound. Think ‘CD quality’, and you’re about there.

Apple’s version of this runs at 24-bit/48 kHz. But there’s an option above that, called ‘High-Resolution Lossless’ which takes the files up to 24-bit/192 kHz. This type of lossless is almost identical to what originated from the studio and results in a file size of about 145mb for a three-minute song.

There’s also Apple Digital Masters, which is a framework to which mastering engineers can work if they want the absolute best reproduction of their work when played via Apple Music.

Here’s a summary of all those numbers and letters in the Apple Music settings on an iPhone: 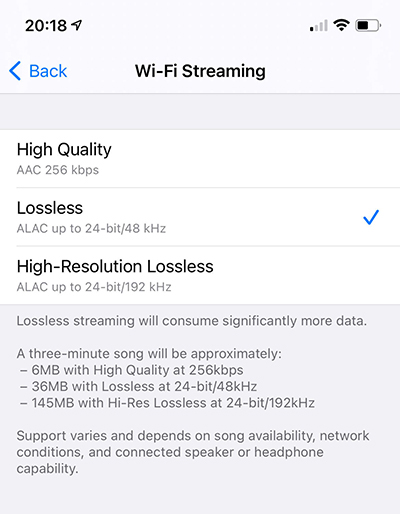 You’ll find the setting to enable lossless audio in the ‘Audio Quality’ section of the Music settings in iOS, and in the ‘Playback’ section in Apple Music Preferences on macOS.

What’s the difference between Spatial Audio and Dolby Atmos?

This is where things can get a little confusing, simply because Apple doesn’t offer much of a distinction for the uninitiated.

This is a form of computational audio which attempts to accurately place audio content within a virtual ‘space’.

The best way to imagine it is to picture yourself wearing a pair of AirPods Pro, watching a movie on your iPad. If you turn your head to one side, the audio from the movie continues emanating from where your iPad rests in your lap; it’s as though the sound is actually coming out of the iPad. Similarly, when people speak on screen, their voice appears to be coming directly from their lips and relative to their place on the screen.

It’s super cool, effective, accurate and a bit spooky at first. When it comes to music, Spatial Audio, in theory, could make you feel like you’re sat in a concert venue with the sound from the band clearly coming from in front of you.

Apple has combined Spatial Audio with something called Dolby Atmos for music.

This is most prevalent in theatres, although there’s an increasing number of low-cost Atmos solutions for home cinema setups.

Dolby Atmos relies on speakers that are placed in traditional surround sound positions (in front of you, to the side and behind your head), and speakers placed in the ceiling (or sound waves bounced off the ceiling to achieve a similar effect). The net result is a completely immersive, all-encompassing sound that adds another dimension to movies.

When it comes to music, Atmos is the new kid on the block. More songs are being mixed in this multi-speaker configuration, but it’s still a relatively small pool. The idea with this for music is that it significantly widens the stereo field, and, in theory, provides an even more immersive experience when paired with Spatial Audio.

I’ll explain what it sounds like in a moment.

You’ll find the setting for Dolby Atmos in the settings screen for Music in iOS and in the ‘General’ section of Apple Music preferences on macOS.

How do you listen to lossless audio on Apple Music?

You can enable lossless audio on iOS 14.6 and macOS 11.4. However, to hear it, you’ll need some extra kit. This is particularly the case with the High-Resolution Lossless setting, which throws up a message informing you that additional gear is needed.

If you’re using a Mac, you’ll need a headphone amp and DAC (digital to analogue converter). If you’re new to this stuff, I’d immediately recommend the iFi Zen DAC, which includes both and is widely regarded as one of the best budget options.

This connects to your Mac via USB-A. Plug-and-play: done. 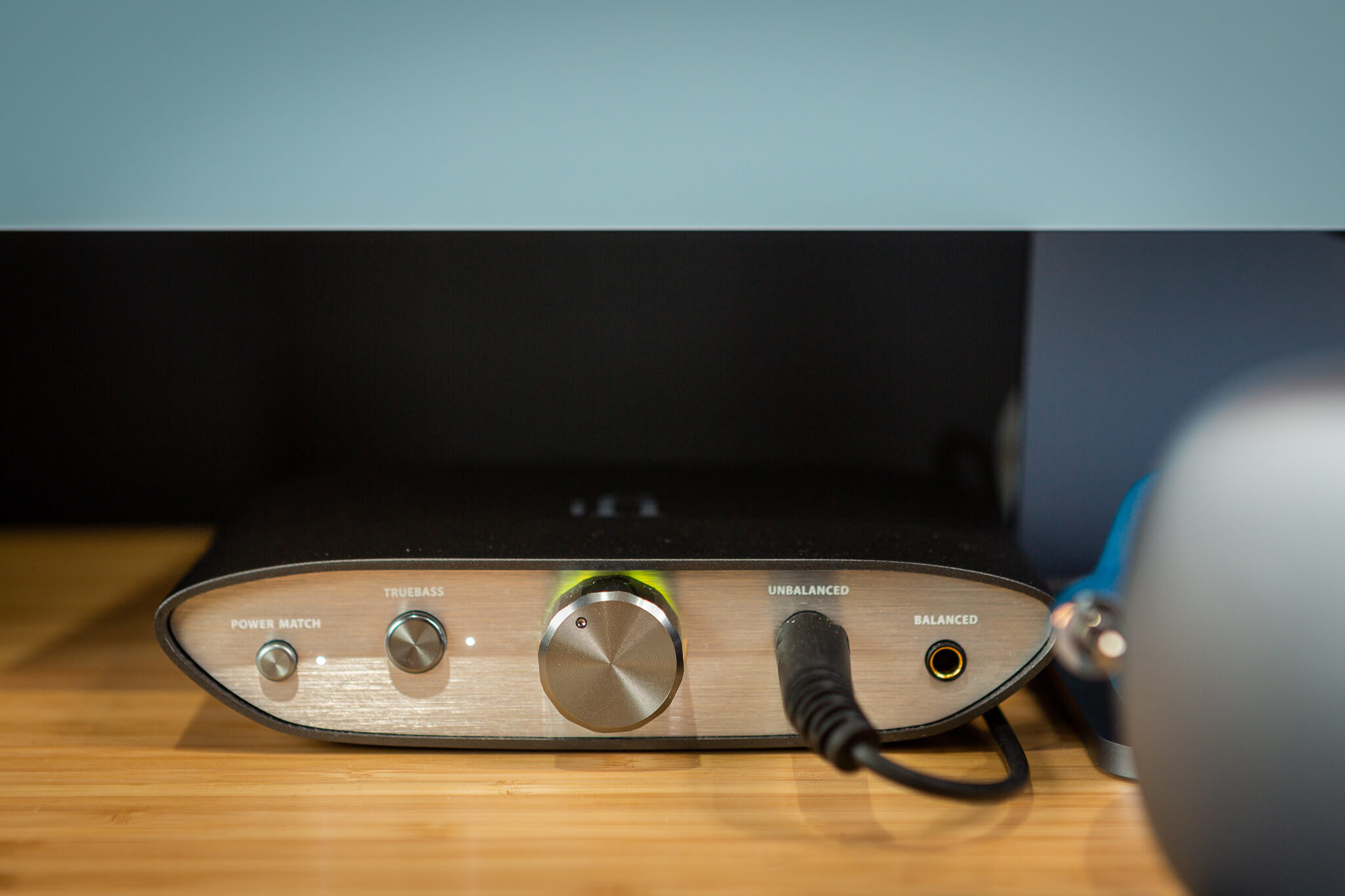 You’ll also need a pair of wired headphones. I’d recommend going open-backed and not spending too much to begin with. My audiophile headphones of choice are the Sennheiser HD560S, which are superb and well-priced. 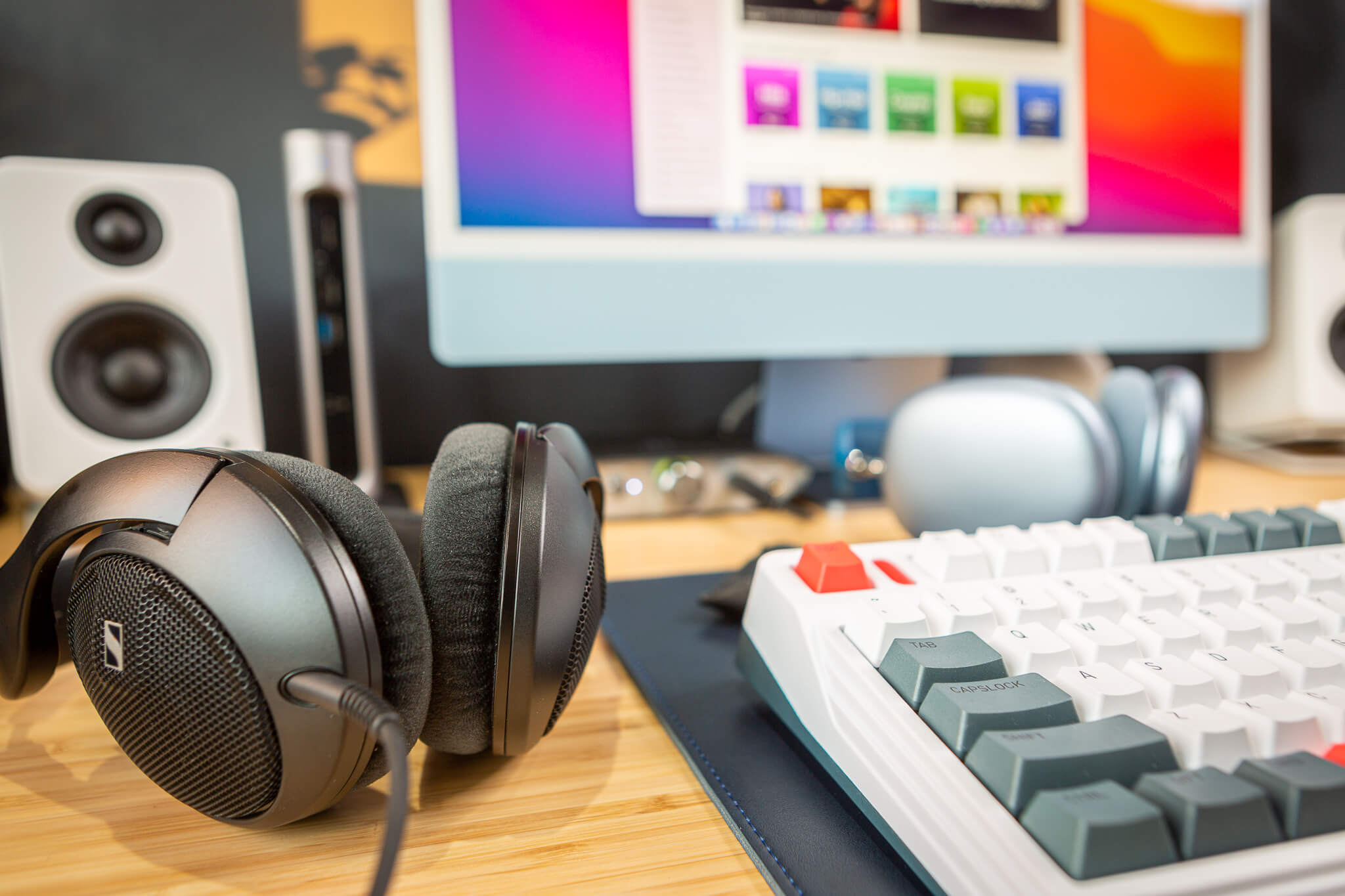 That’s it. With that gear, you can experience Apple Music lossless.

If you’re using an iPhone or iPad, you’ll need the same thing – a headphone amp and DAC. Thankfully, there’s a wonderful company called AudioQuest, which makes an all-in-one called the DragonFly Black. It won’t break the bank, and with the addition of the right converter for your device (from USB-A to either Lightning or USB-C), it’ll enable you to hear lossless Apple Music on your iPhone or iPad.

Skip to the bottom if you want to hear how this all sounds.

How do you listen to Spatial Audio and Dolby Atmos?

This one is simple. In order to hear Spatial Audio and Dolby Atmos, you need a compatible pair of headphones. The setup I’ve described above won’t work with these audio mixes (you’ll just receive regular stereo). This is because the headphones need either the W1 or H1 chip to experience Spatial Audio and Dolby Atmos. The list of compatible devices at the moment includes AirPods, AirPods Pro, AirPods Max, and recent Beats by Dre headphones.

What does it sound like? I’ll be honest – it’s odd. My podcast host, Rob, suggested that Dolby Atmos music on Apple Music sounds “how everything sounds just after you leave a club or gig”. I agree; it’s low-pass filtered, hollow and appears to have an artificially boosted middle. It’s also quieter, less detailed, and in my early tests there appeared to be weird fluctuations in volume.

I don’t like it. And I think that’s because it doesn’t really suit music. Video is perfectly suited to both Spatial Audio and Dolby Atmos, but the combination of both for pop, rock, electronic and just about any other genre is just a bit disconcerting.

Is lossless worth it?

To most non-audiophiles, the new lossless Apple Music tracks (which is practically the entire library) will sound louder. That’s the main thing you’ll notice when you A/B test between lossless and the ‘old’ AAC format.

What’s interesting is how it sounds on different headphones. Here are my experiences with the three setups you’ll most likely be interested in.

I’m used to TIDAL’s lossless audio, which has always sounded superb through my iFi/Sennheiser setup. It therefore seemed sensible to compare that service to Apple Music.

Playing Don’t Start Now revealed no noticeable difference between the two. If anything, Apple Music lossless sounds a bit punchier (possibly at the expense of some detail).

It is so close, though. Audiophiles will look deeper and probably identify differences between TIDAL and Spotify’s highest quality audio, but I struggled to spot anything meaningful. They both sound great.

The difference between standard AAC Apple Music and its lossless counterparts is very noticeable. The soundstage for the latter is wider, there’s more detail and the muddiness evaporates. It’s also perceivably louder, but not at the expense of dynamics. It’s a big upgrade with the right kit.

This is where it gets a bit weird. Because while AirPods Max aren’t audiophile headphones, there is definitely an ‘experience’ factor at play when you pair them with Apple’s new lossless format.

I’m not sure where the AirPods Max top-out in terms of their ability to decode high-quality audio. They’re of course governed by Bluetooth (which maxes out at 250 kbps), but the immediate thing you notice when switching to Apple’s expensive cans is how much brighter they sound than the wired Sennheisers. There’s lots of EQing going on.

These are mass-market headphones, and the sound profile is designed perfectly for that crowd. Switch between AAC and lossless on AirPods Max, and the music just gets louder and punchier. For most people, it’ll be enough to raise a wry smile – and if you’re not an audiophile, that’s probably all you need.

I’m under no illusion that the AirPods Max are fully benefitting from lossless – they simply can’t – but they sound better and louder with it turned on. For their intended audience, that’ll allay some of the initial disappointment that came with the lossless audio announcement.

These sound nowhere near as bright or detailed as AirPods Max, but that’s true no matter the source.

They perform identically with Apple Music lossless, though; it just gets louder and a bit punchier when you switch the setting on.

It’s not quite the same deal on the iPhone, unfortunately, which sounds almost identical on either setting (it’s the same with the AirPods Max). I have no idea why Apple Music on macOS responds differently, but if you’re hoping to hear better audio via iOS, you’re far better off opting for the headphone amp/DAC combo.

Tell me your experiences

I’d love to know your experiences of Apple Music lossless, and the weird combination of Spatial Audio and Dolby Atmos.

As always, please get involved in the comments – it’s where these articles come alive.