How I Backup Everything as a YouTuber – Synology DS1522+ NAS Review

How I Backup Everything as a YouTuber – Synology DS1522+ NAS Review

I’ve never spoken about my backup system before because it has been embarrassingly terrible.

Yup, that’s right – I’ve made quite a big upgrade, which means I can finally show you how I backup all of my stuff as a busy content creator.

The upsides to being a YouTuber

There are many benefits to being a tech YouTuber, but one of them – let’s not beat around the bush – is being sent really cool stuff.

Recently, I was sent one of the coolest things I’ve ever been sent – a full-on NAS from Synology. They even came out to install it for me, which was jolly nice of them. 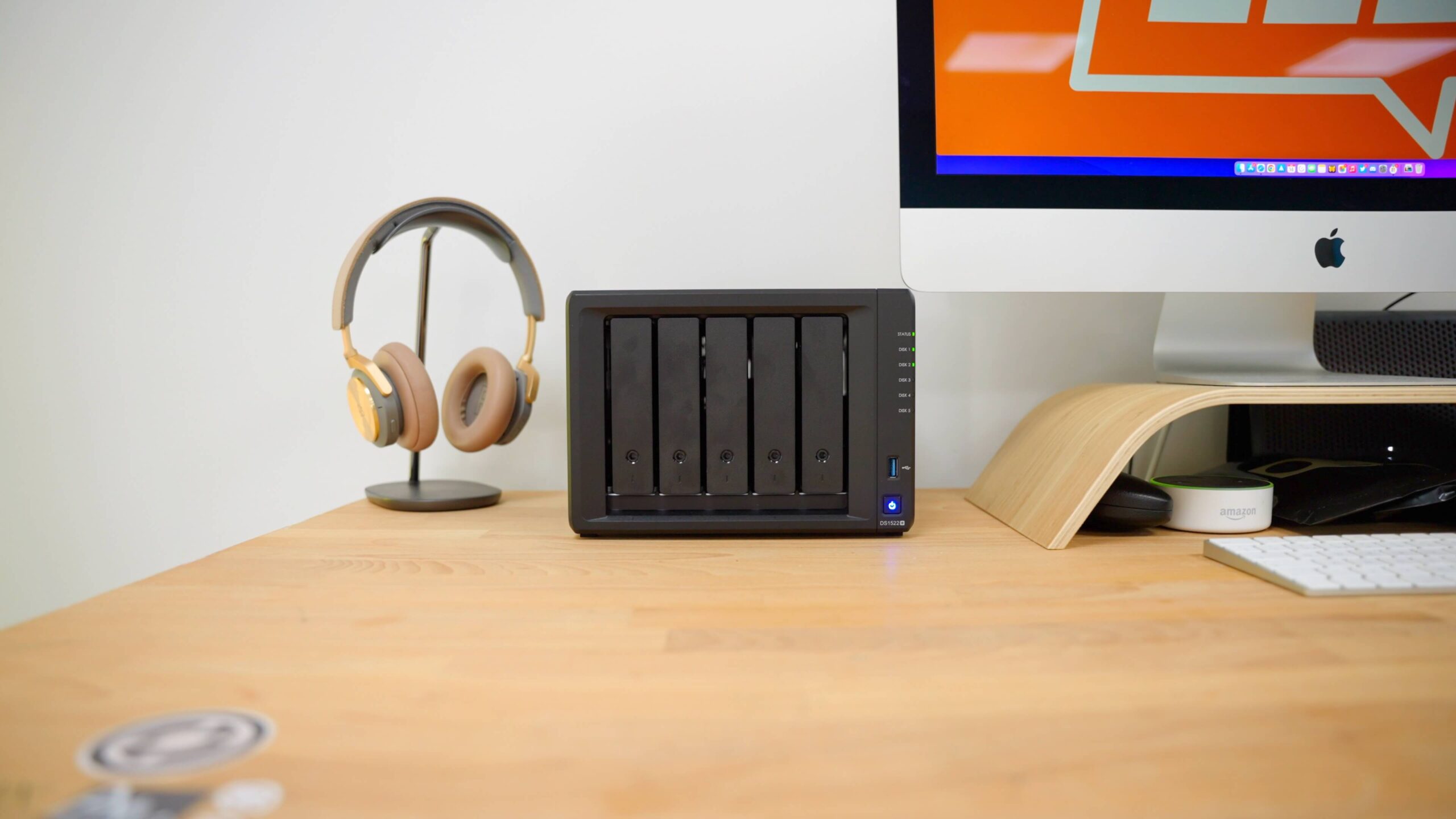 Synology isn’t sponsoring this content, but their generosity has finally given me the push I needed to create a robust, future-proof backup system that means I can finally sleep sound at night.

Today, I’m going to introduce you to the DS1522+ DiskStation NAS and reveal how it has revolutionised my ability to keep everything I hold dear – safe.

Who knows, it might even give you some ideas for your own backup system!

One question you might have straight away is: what on earth is a NAS? Well, it stands for ‘network attached storage’ and it is, basically, a bit like having your own personal Dropbox or iCloud Drive. 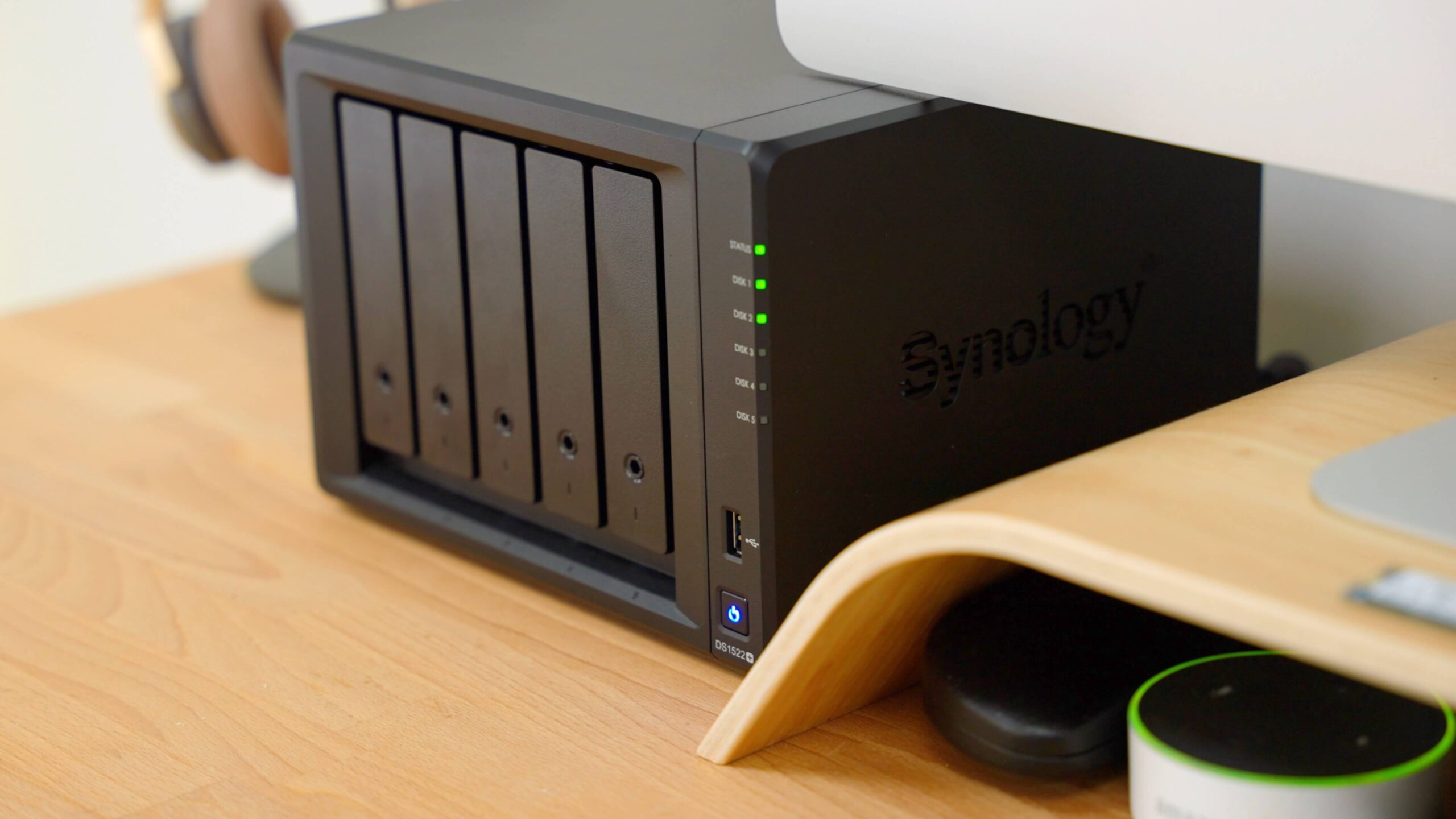 There’s a bit more to it than that, obviously, but a NAS is simply a device which you plug into your broadband router and into which you can insert a bunch of hard drives.

Those drives can be configured in a number of ways for storage or backup purposes. They’re used by business and home users to host data centrally for ease of access by different people, no matter where they happen to be or what device they have to hand.

Some people even use their NAS for streaming purposes by hosting terabytes of audio and video on them – but that’s becoming less of a thing these days, thanks to the Netflix world we now live in.

Synology also promotes the use of their NAS as central storage areas for photo libraries and as a hub for home and office surveillance systems. 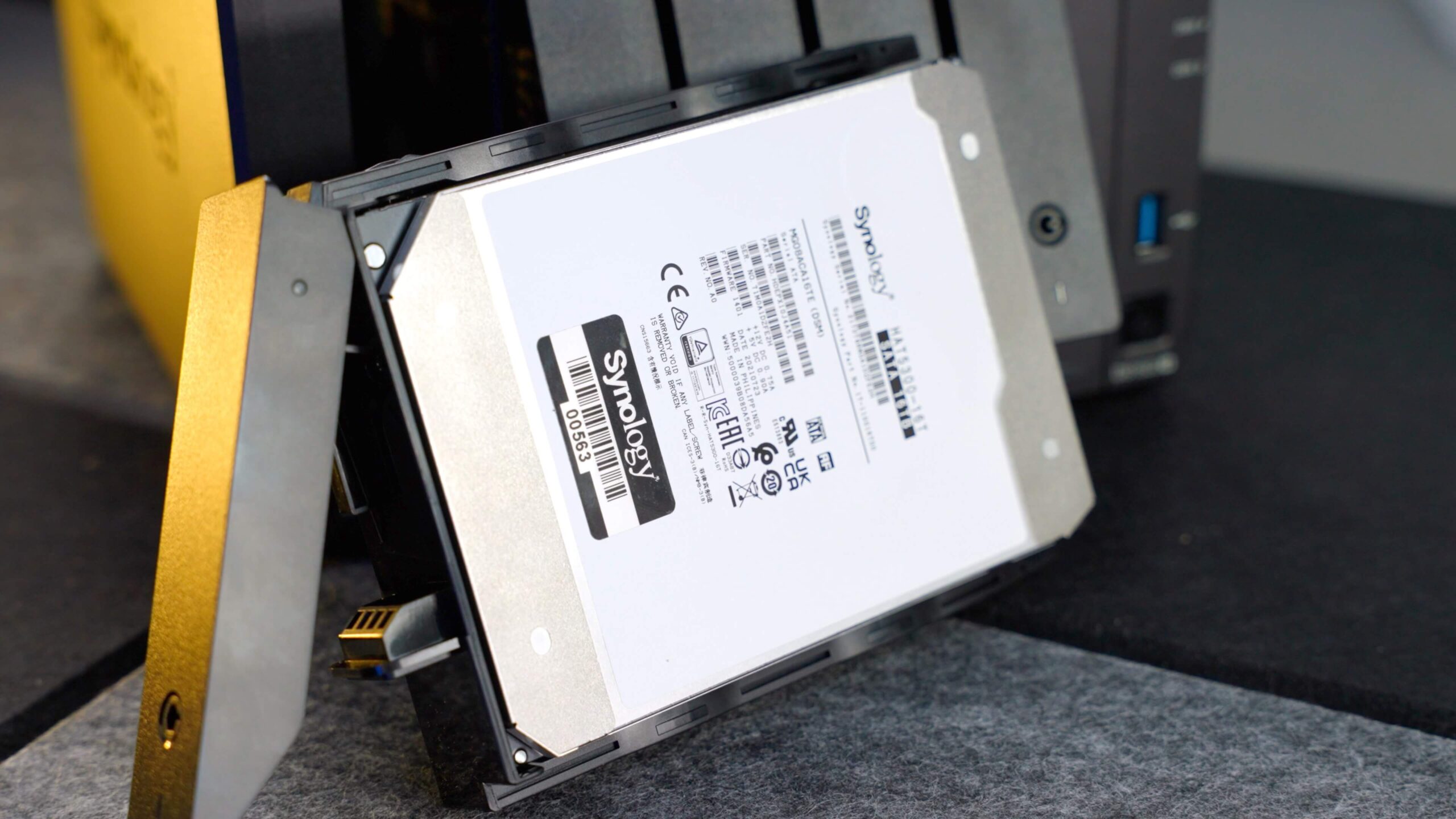 Those five drive slots can be increased to 15 with the addition of two expansion units. And the aforementioned SSD cache is quite cool, too. Install a couple of sticks of that, and it’ll make the transfer of data to your NAS far more efficient and a little quicker (although it’s worth noting that you can’t use the SSD space itself as storage).

The DS1522+ is controlled and accessed directly via the brilliant built-in web-based operating system. You can also access it as a standard external drive connection in both macOS and Windows.

Accessing your NAS remotely couldn’t be easier – Synology sets you up with what they call a ‘QuickConnect’ URL that can be used on any web browser to securely log into the NAS.

There’s an awful lot to the DS1522+ – too much for a ‘normal tech’ reviewer like yours truly to dive into. So, instead, let’s look at how I’m using it and the key features you might be interested in.

My NAS has just two drives inside it at the moment. They’re both 16TB (with 14TB of useable space) and are mirrored via something called Synology Hybrid RAID, which means if one fails, the other will seamlessly become my working drive and I can simply replace the dud one.

And replacing them really is easy – you just lift a flap, pull out the drive, screw in the new drive, and pop it back in. Bosh – done. 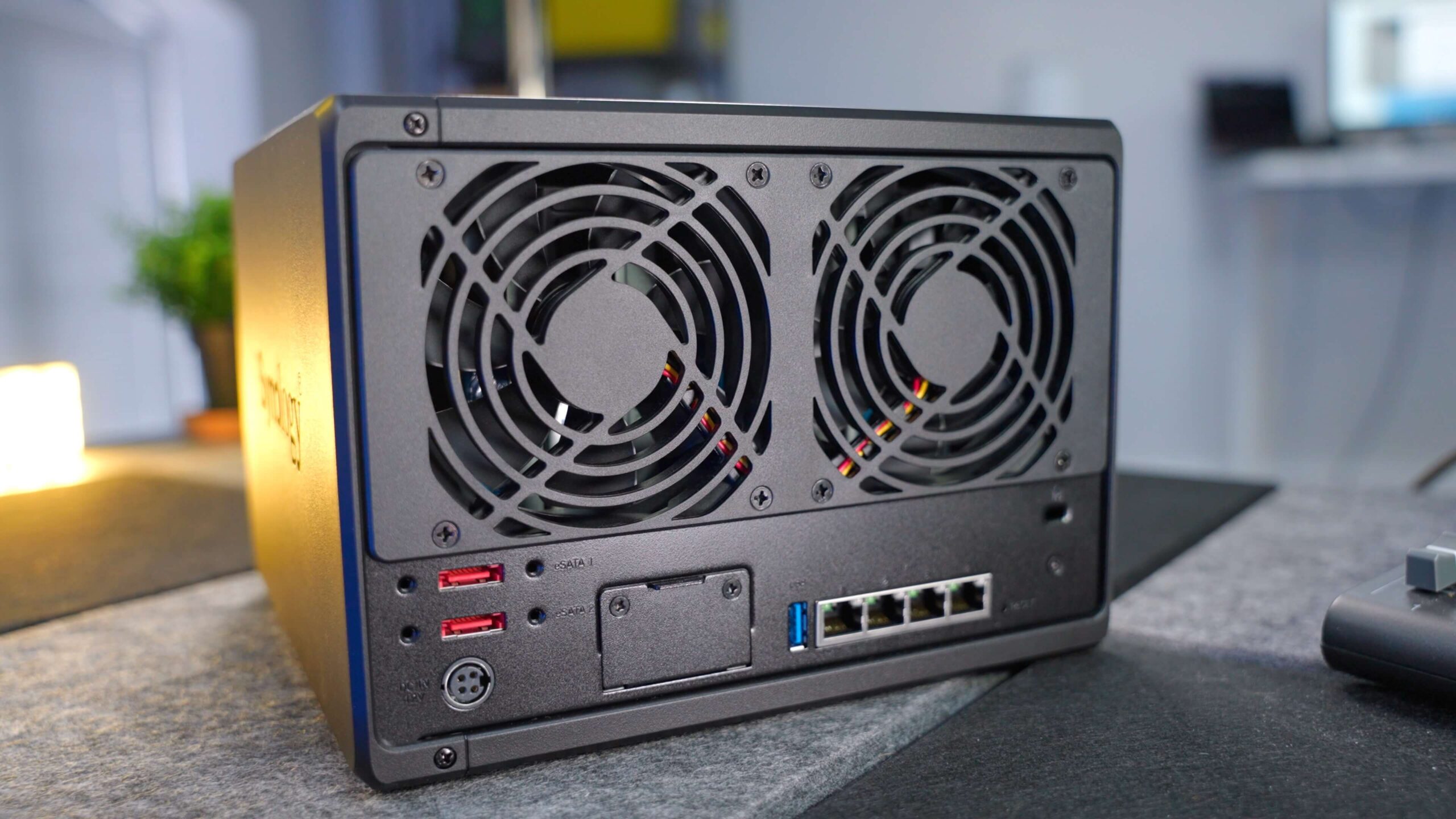 In terms of how I’m using the NAS, it performs two vital functions for me. The first is a place on which to store my important stuff. As you might guess, this is largely video files, brand assets, blog images, and Final Cut Pro libraries (I’m slowly adopting Hazel to make this all sync across automatically – but that’s for another blog post).

I also place b-roll on there that I might need to re-use, along with published videos for quick access. It has been game-changing for my production process because I no longer have to worry so much about carrying around SSDs full of my footage – whenever I need something, I can log onto the NAS, drag across the file and crack on.

I’m also using the built-in sharing feature to occasionally send links to external editors and sponsors if they need access to my footage. Again – a huge time saver and something that reduces my reliance on services like Dropbox.

I’ve opted for the latter by creating a shared folder called Time Machine on the NAS. It was then just a few simple clicks and tweaks in the NAS software to make that shared folder available to my 16-inch MacBook Pro as a Time Machine drive.

So, I have a huge storage area for the things I want to keep safe and access regularly, and a Time Machine backup for my MacBook Pro production machine.

But I’ve gone one step further!

Synology also offers something called ‘C2’, which is their automated cloud backup service. My C2 account is attached to the DS1522+, which means that it automatically backs up selected folders to the cloud, thus providing me with that all-important offsite backup. 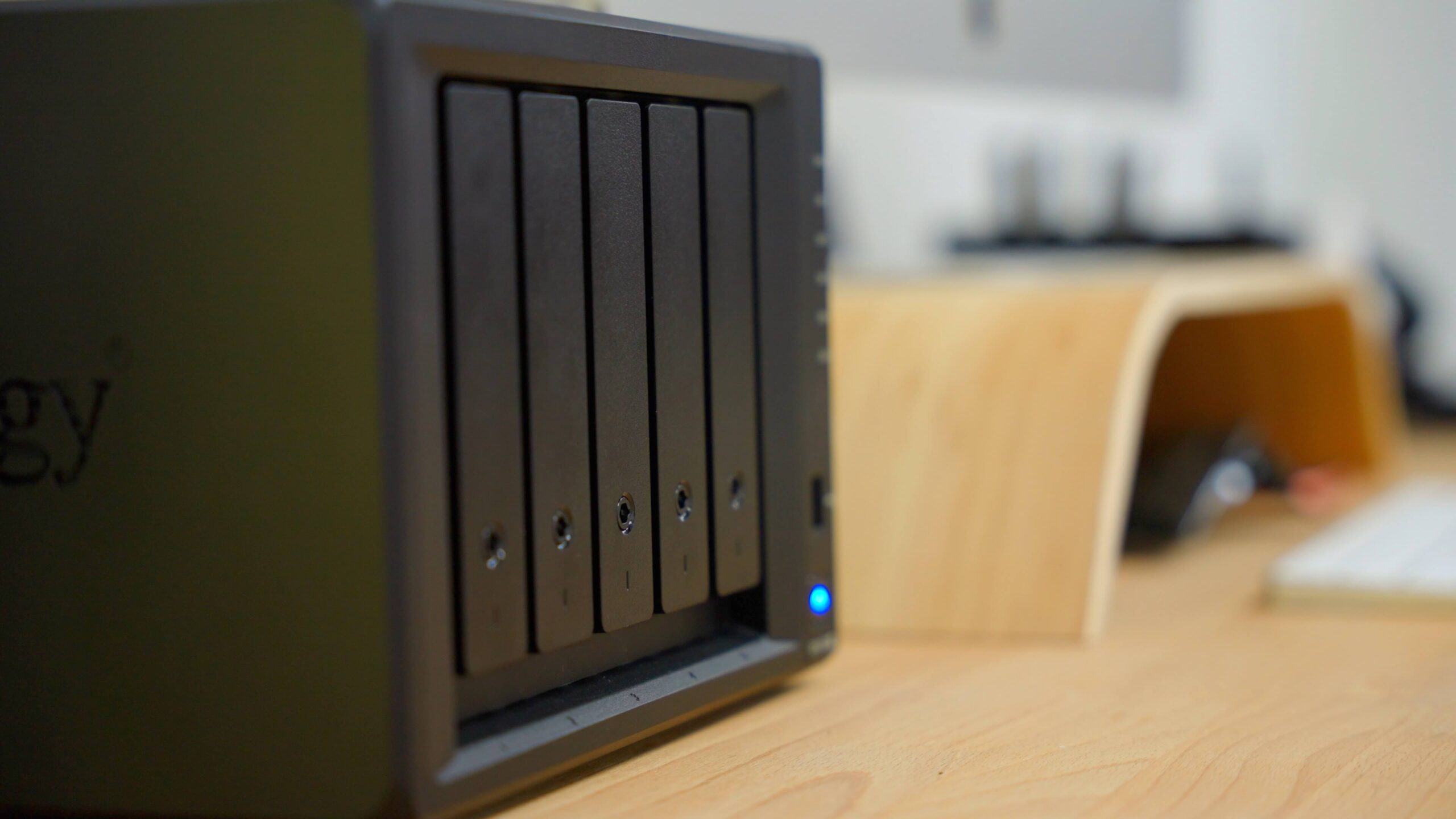 However – I’ve gone even further than that.

I also have a 14TB external drive attached to the NAS which uses Synology’s Hyper Backup tool to automatically backup selected files from the NAS to that drive. This provides the ultimate peace of mind that even if both drives in the NAS fail, I still have a backup of the most important stuff, which I can also take home or away with me if I fancy keeping it off-site while I’m not at the studio.

Oh, and there’s one more thing! As mentioned earlier, Synology also provides an iPhone app called Photos Mobile which automatically sends all of your photos and videos to your NAS for both backup purposes and quick access.

So, all of my photos are super safe, too!

Hands-up – my backup system is a bit overkill. In fact, I’ve gone from one extreme to another. But this does reveal how far you can go with this kind of thing and how easy it is to build out your own backup system over time. 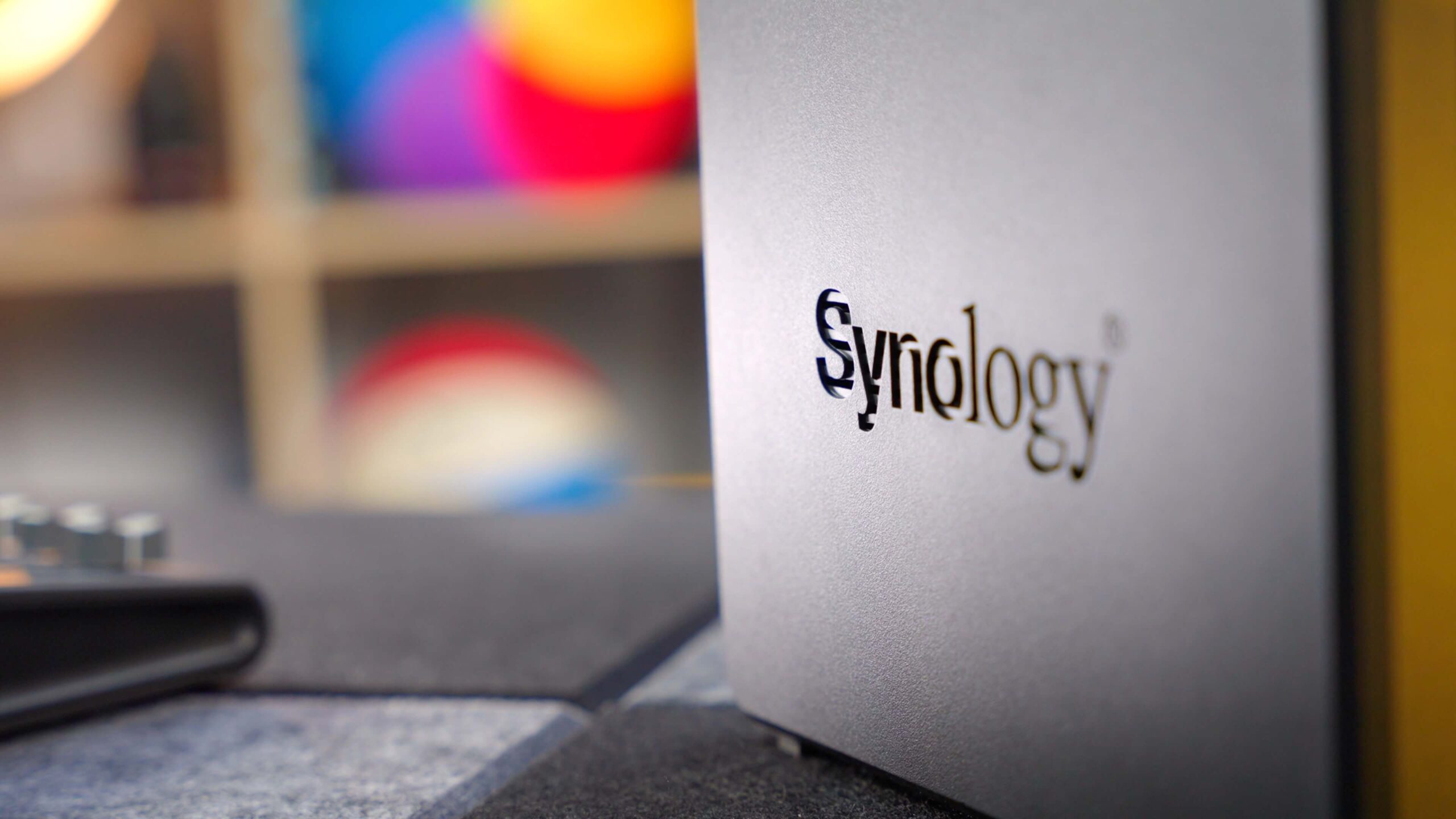 For instance, I still have a Time Machine backup connected to my Synology router (that’s right – I actually have TWO Time Machine backups running!). I made a video about this setup, but it’s a far more affordable way to gain NAS functionality without investing in something as big as the DS1522+.

My advice is to set a budget, check out the full range of NAS devices offered by the likes of Synology and start small.

That’s the best thing about a NAS – you can build it out as your needs increase.

Thoughts on the Synology DS1522+ DiskStation

The DS1522+ is a beast of a NAS and definitely overkill for a lot of home users. However, it may interest you to hear that I’m already nearly 40% into the usable space on mine, which means I probably will have to fill up a few more of those drive bays next year.

The wealth of options on the DS1522+ is incredible, and while most of the functionality and installable packages aren’t of much use to me, small businesses and tinkerers will love putting this thing through its paces. 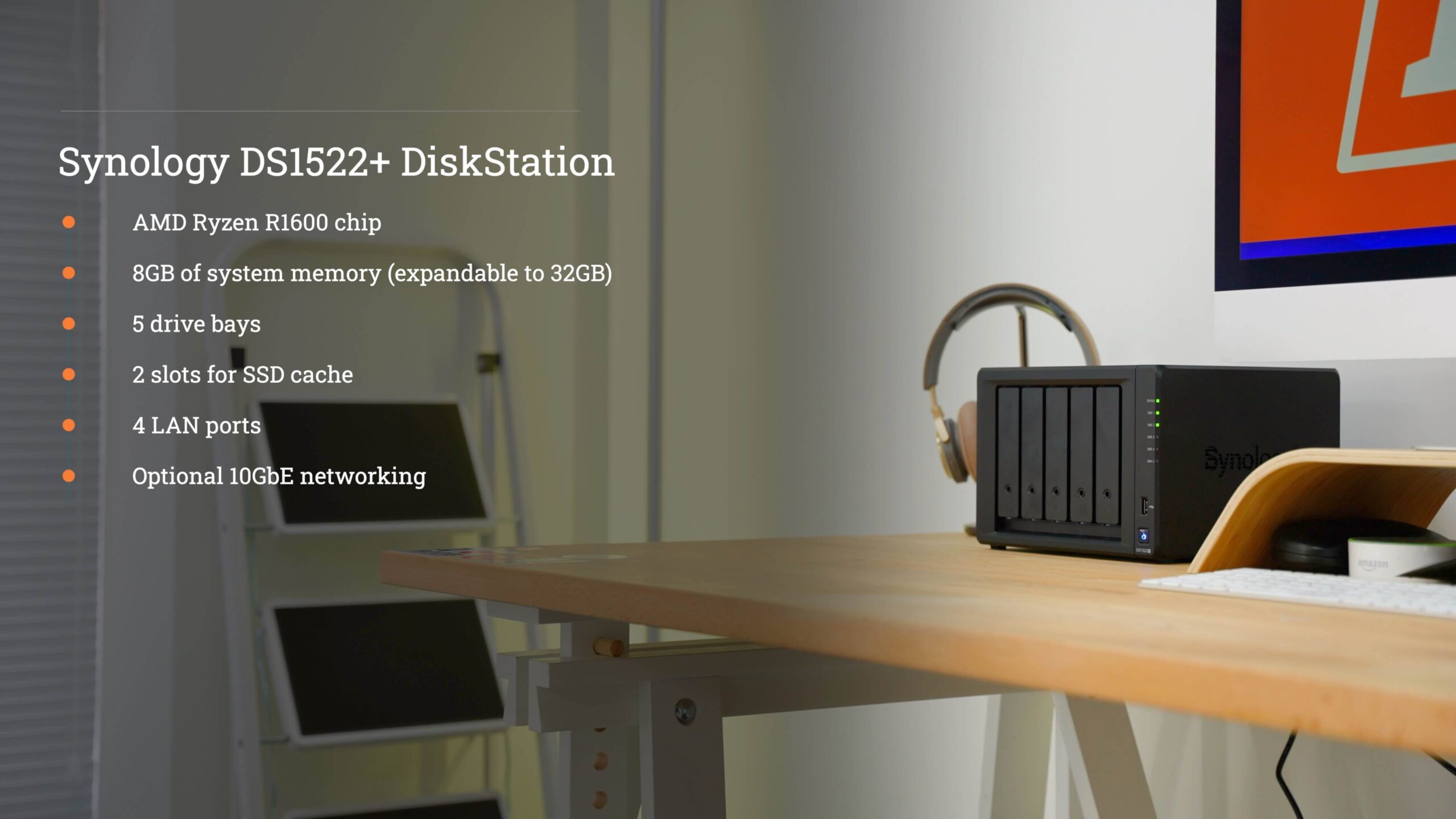 It’s built like a tank and really looks like it means business, too. Place this thing on any desk, and it immediately looks like you’ve got everything figured out, storage- and backup-wise. As superficial as that might sound, I do quite like it.

The only thing I’d say about the DS1522+ – or, more specifically, the drives I have inside mine – is that it is loud when data is being written or accessed. So much so, that I now have to turn it off while filming a-roll. This won’t be an issue for most users, but it’s definitely something to keep in mind if you operate in a quiet space.

I’d love to hear from you. Have I tempted you into a NAS of your own? Have I exposed a hole or two in your backup regime? Or do you already have a super-robust backup system in place?

Get involved in the comments below!