Google has finally made a smartwatch!

I’ve been wearing the Pixel Watch for the last couple of weeks. On and off. Obviously – there’s no way I’m letting go of the Apple Watch Ultra that easily.

Judging by my social feed timelines, a lot of people are interested in the Pixel Watch. They have been for quite some time; ever since the birth of Wear OS in 2014, Google’s entry into the hardware realm for smartwatches has been highly anticipated.

Now, alongside the bountiful third-party Android-based wearables, we have the option of slapping Google’s very own Pixel Watch onto our wrists. But the prevailing questions about this new device have been loud and clear.

What does the design look like in person? What’s the performance like? Where do its strengths lie? What does the Fitbit integration really mean for the user? Is the battery any good?

Is it as good as the Apple Watch?

The unboxing and design

I rarely write about unboxing products because I know that you’d probably rather untangle a Slinky than read something as dull as that.

However – bear with me, because the unboxing experience for the Pixel Watch was something very special indeed. 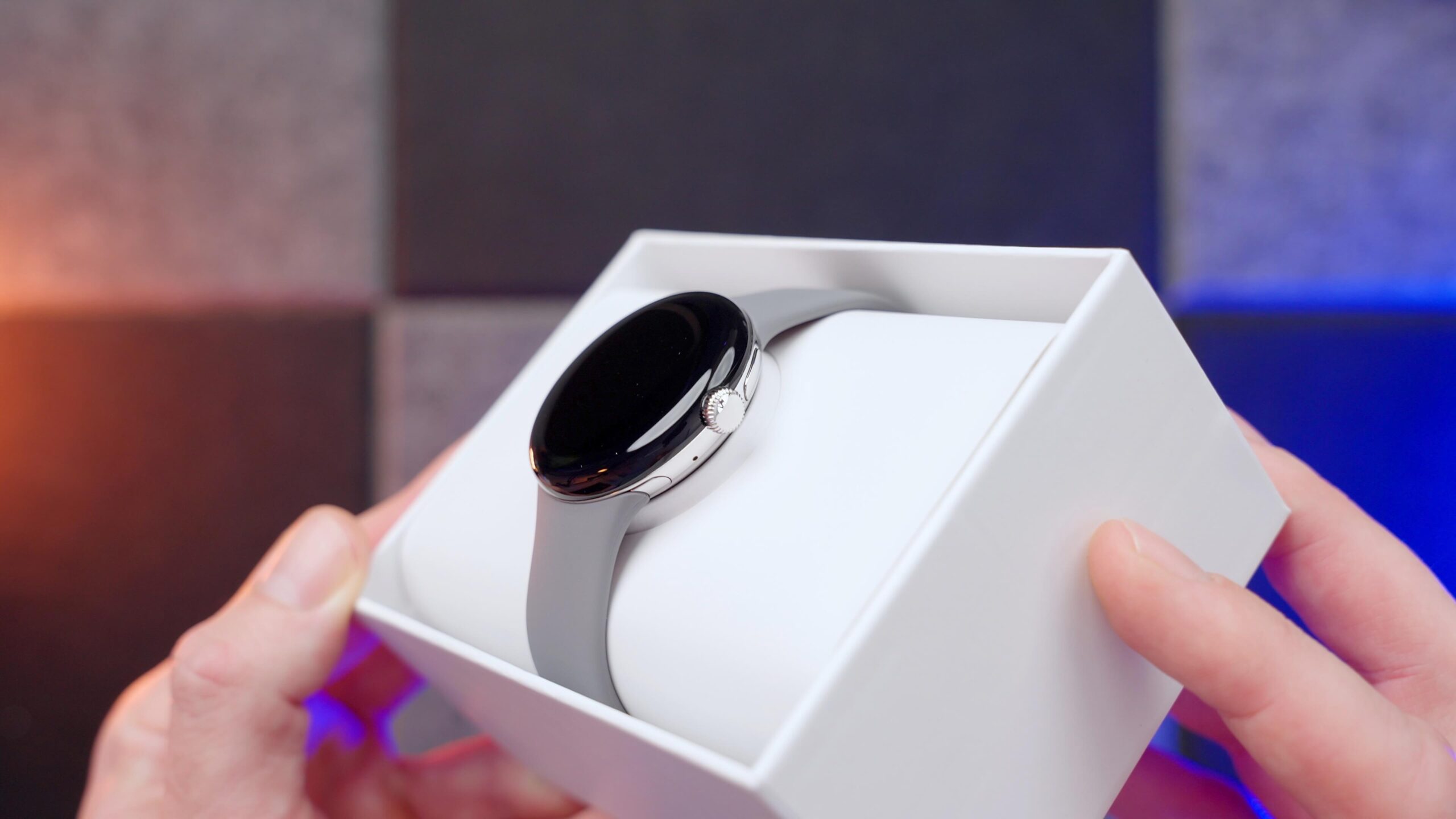 It took me by surprise. This thing looks like a piece of jewellery, thanks in part to the gleaming stainless steel casing and the clever decision to place it atop a small raised cylinder in the packaging.

More importantly, it felt like something completely new, thus eliciting a similar sensation to the one I had while unboxing the Apple Watch Ultra.

As someone who has unearthed several standard Apple Watches from their relatively lacklustre packaging, the Pixel Watch felt like an event. This was new territory and, as such, it was very exciting.

The Pixel Watch comes in three colours – Champagne Gold, Matte Black, and Polished Silver (the one I was sent to review). Made from 80% recycled metal, it comes with a fluoroelastomer band with a soft-touch coating. I have no idea what any of that means, but it feels satisfactorily premium and the band is pretty much identical to the Apple Watch sports bands of the same material (you can, of course, customise your Pixel Watch with a variety of band colour options). 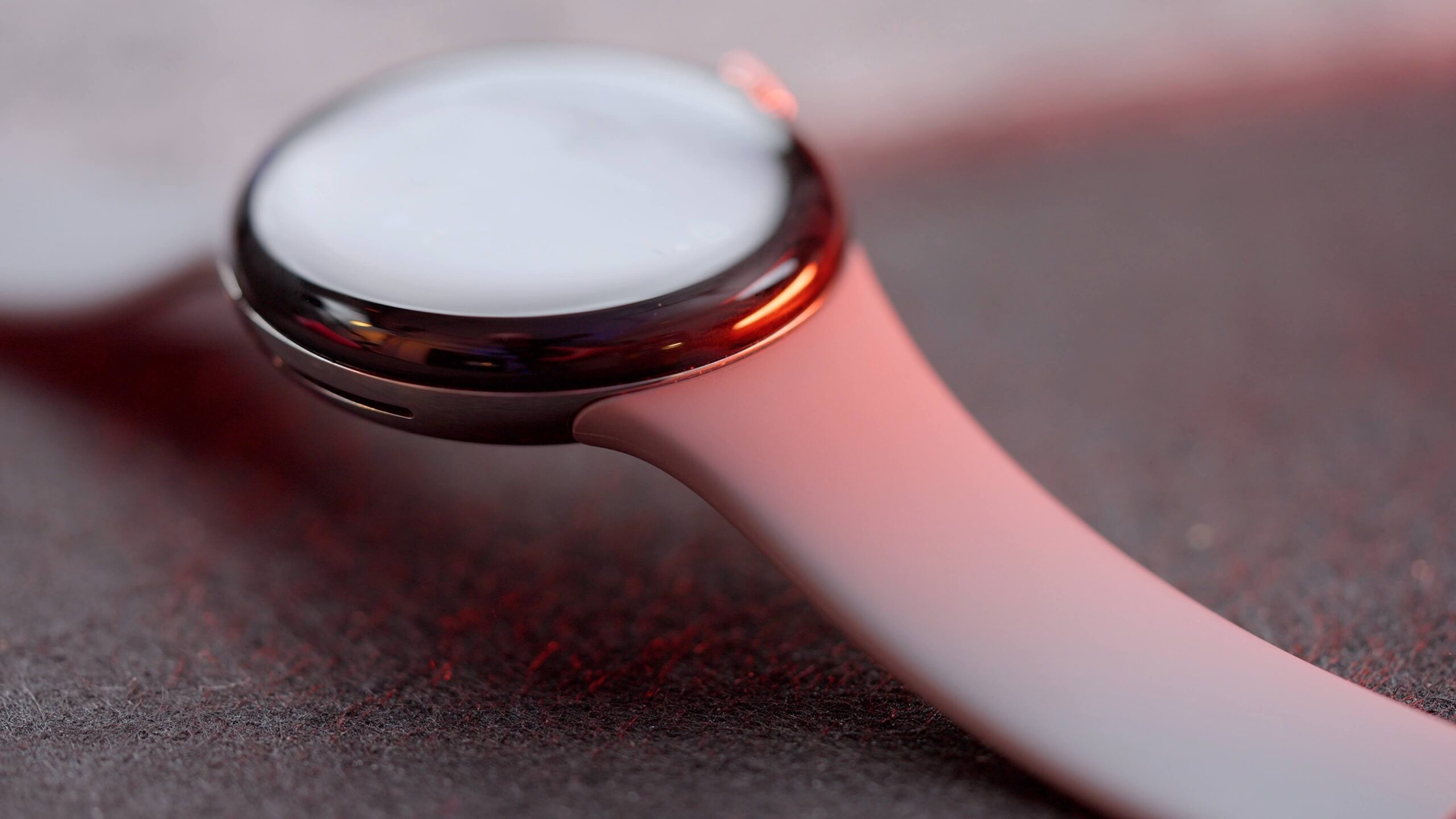 The Apple Watch design cues continue, with two buttons resting to the right of the circular watch face. One of those doubles as a crown and features beautiful weighting – arguably better than my Apple Watch Ultra’s crown, in fact. Pressing the crown takes you into an apps list, while pressing the regular button above reveals your most recent apps (a long press initiates Google Assistant – more on that later).

A lot has been said and written about the Pixel Watch display. It’s plenty bright enough, and I’m a big fan of the circular design, but there are some fairly hefty bezels at play. Despite this, you rarely notice them and I’m yet to feel like they encroach on the user experience – despite what you might read and hear elsewhere.

It really is a pretty little thing – with ‘little’ being the operative word. Although the size has – figuratively – grown on me over the last few days, it is a bit small for my taste. I’m conscious this might be the ‘Apple Watch Ultra Effect’ taking hold, but regardless of that beast of a device, the Pixel Watch really could do with a second, larger option for anyone who prefers bigger timepieces. 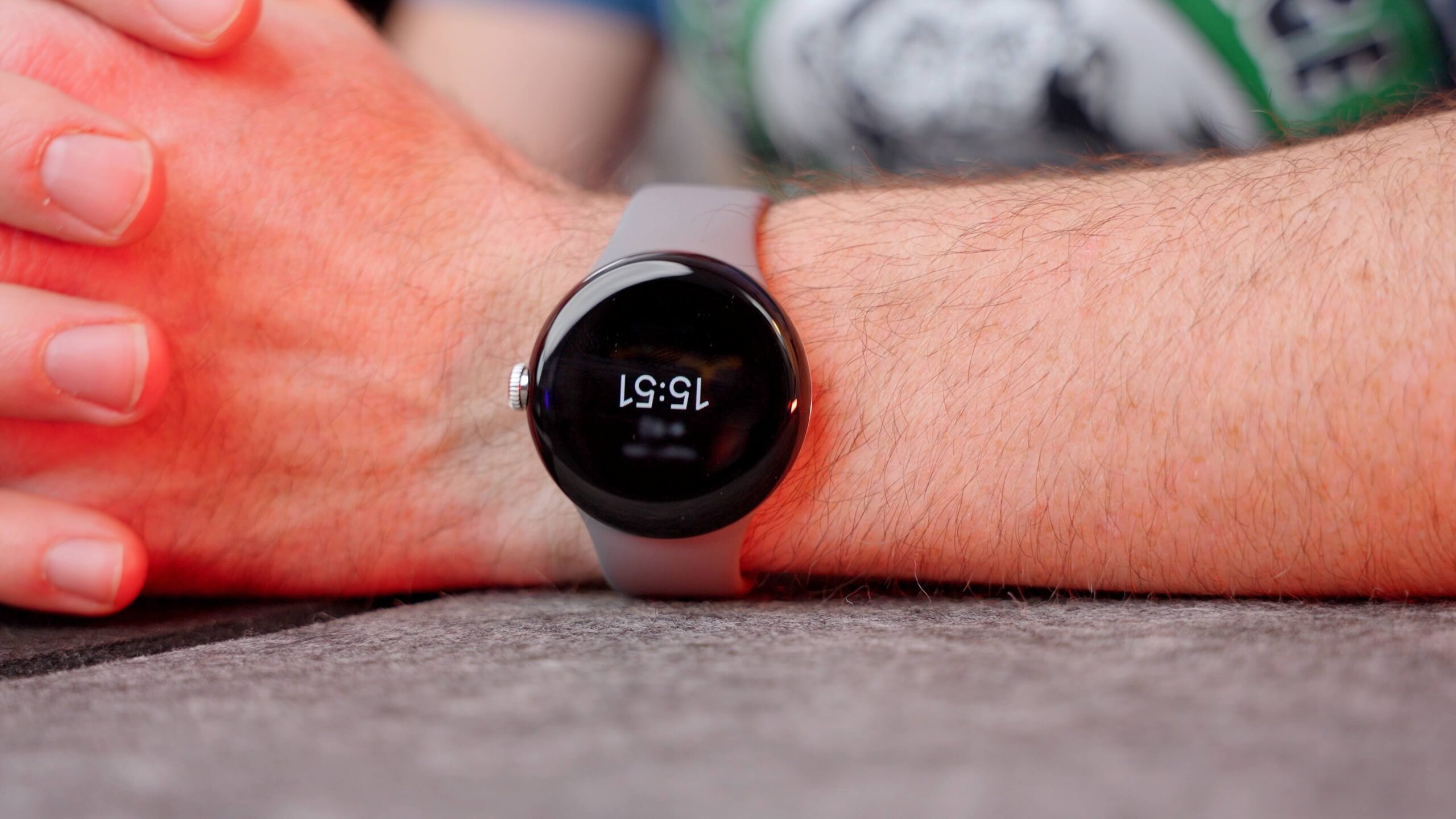 Despite this, it’s the sort of watch which does slot nicely into most settings. It’s a great, unobtrusive fitness comparison, and will look perfectly at home with most clothing choices.

As always, I’d recommend trying one on your wrist before committing to the purchase. Just like the Apple Watch Ultra, the single size of the Pixel Watch limits its audience, and will only suit specific wrists and tastes.

But at £339, it’s a very tempting price point if you’re already in the Pixel Gang – that fact cannot be ignored.

My experience with Wear OS on the Samsung Galaxy Watch5 Pro hasn’t been great. Although perfectly functional, it feels incredibly sluggish compared to Apple’s watchOS.

This concerned me about the Pixel Watch. Knowing that Google had opted for an Exynos chip to run its first wearable (another product of Samsung which completely ruined my experience of the S22 Ultra) I expected the Pixel Watch to be a bit troublesome, performance-wise. 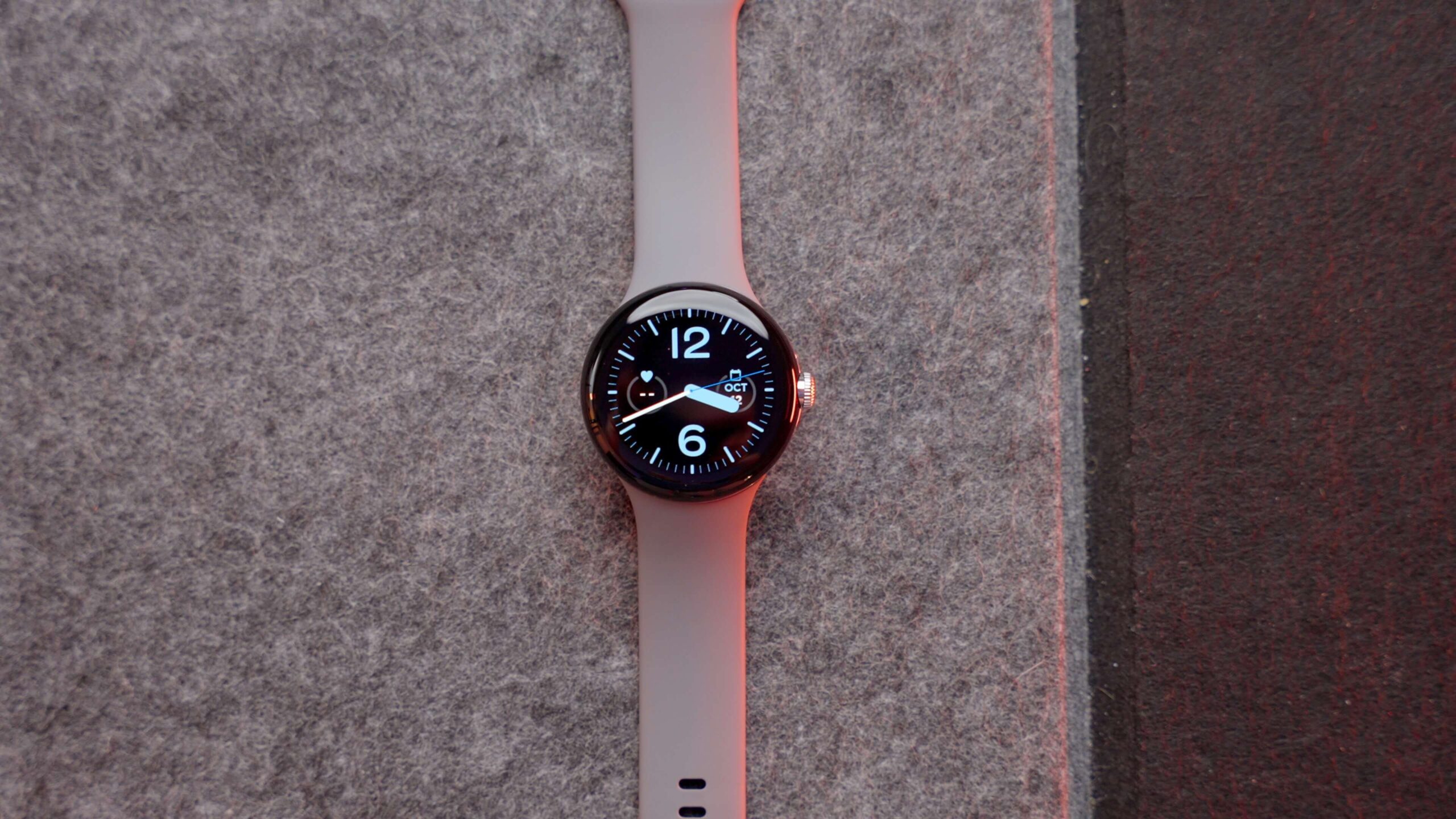 I’m happy to report that it isn’t. The Pixel Watch is a much smoother operator than the Watch5 Pro – impressively so, in fact. The OS feels fluid and, despite the occasional stutter, you can whip around the Pixel Watch pretty quickly.

I still prefer the polished nature of watchOS, but the Pixel Watch isn’t a pain to use at all – it gets the job done really well.

However, Google hasn’t spent much time at all speaking about the nuts and bolts of the Pixel Watch; they seem far more interested in immediately highlighting its raison d’être.

Three areas of expertise are highlighted on the Pixel Watch website:

Let’s dig into those other points.

The Pixel Watch is, basically, a Fitbit in Google clothing. That’s not a bad thing and I’m certainly not throwing shade here; acquiring Fitbit was a smart move by Google. 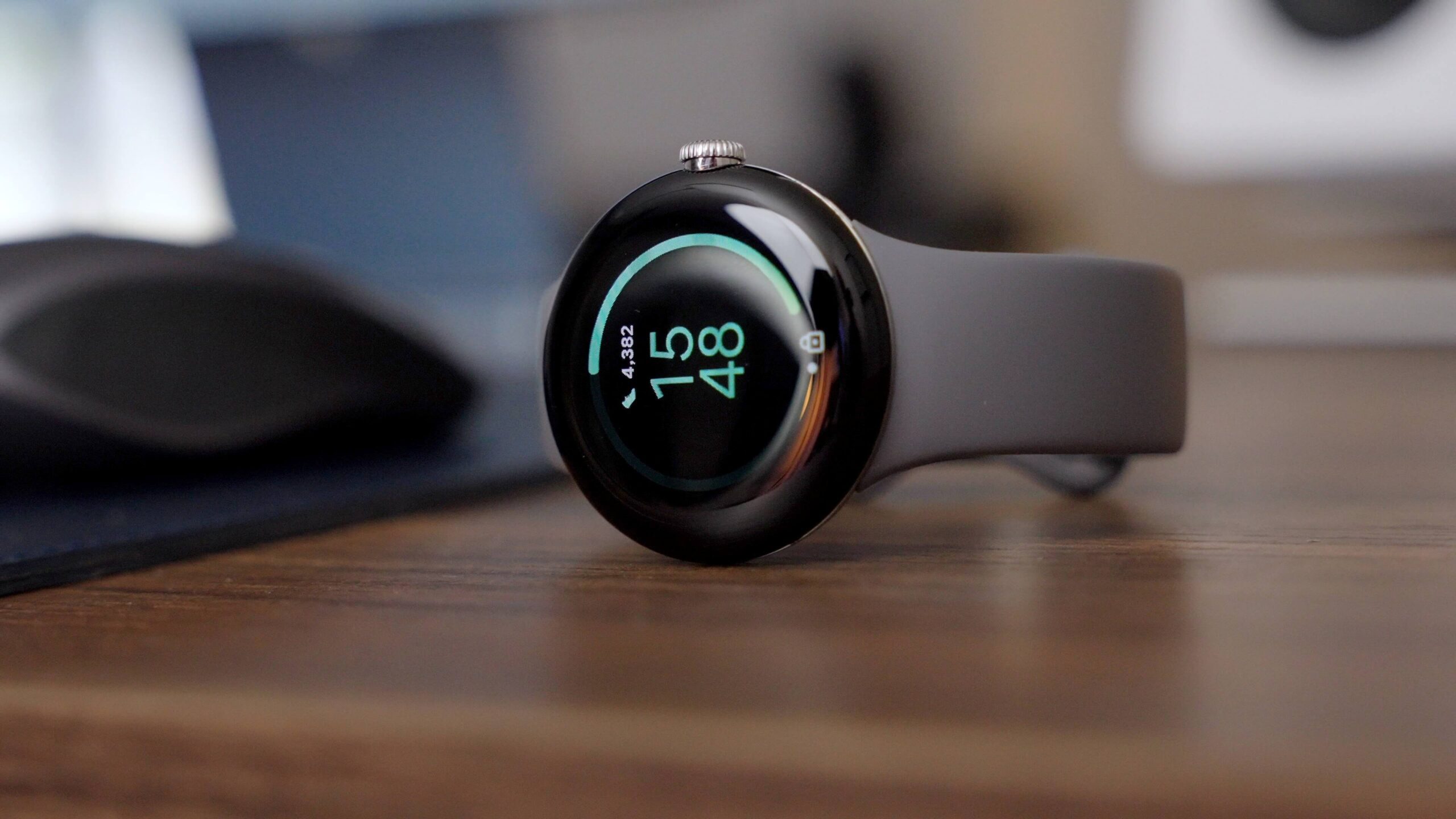 The team at Fitbit knows exactly what it’s doing – they’ve been in this game for longer than both Google and Apple and this is evident in the way the Pixel Watch handles its fitness duties.

This does mean that you need a Fitbit account to get the most out of your Pixel Watch, but I can confirm that you don’t need the premium version (although it’s worth noting that you get six months free with the device). I’m using the free Fitbit account and, thus far, I don’t feel shortchanged at all – it has all the tracking and analytical data I need.

The Fitbit app is a really nice place to be, too. As I’ve previously noted, I’m not the sort of person to spend hours digging into my own fitness performance, but whenever I’ve headed into the Fitbit app to check out my running stats, I’ve enjoyed the process. The data is attractively presented and doesn’t appear to leave any stone unturned.

When it comes to the business of fitness tracking, the Pixel Watch does a great job. I’ve worn it on several runs with my Apple Watch Ultra on the other arm and the recordings pretty much mirrored one another. 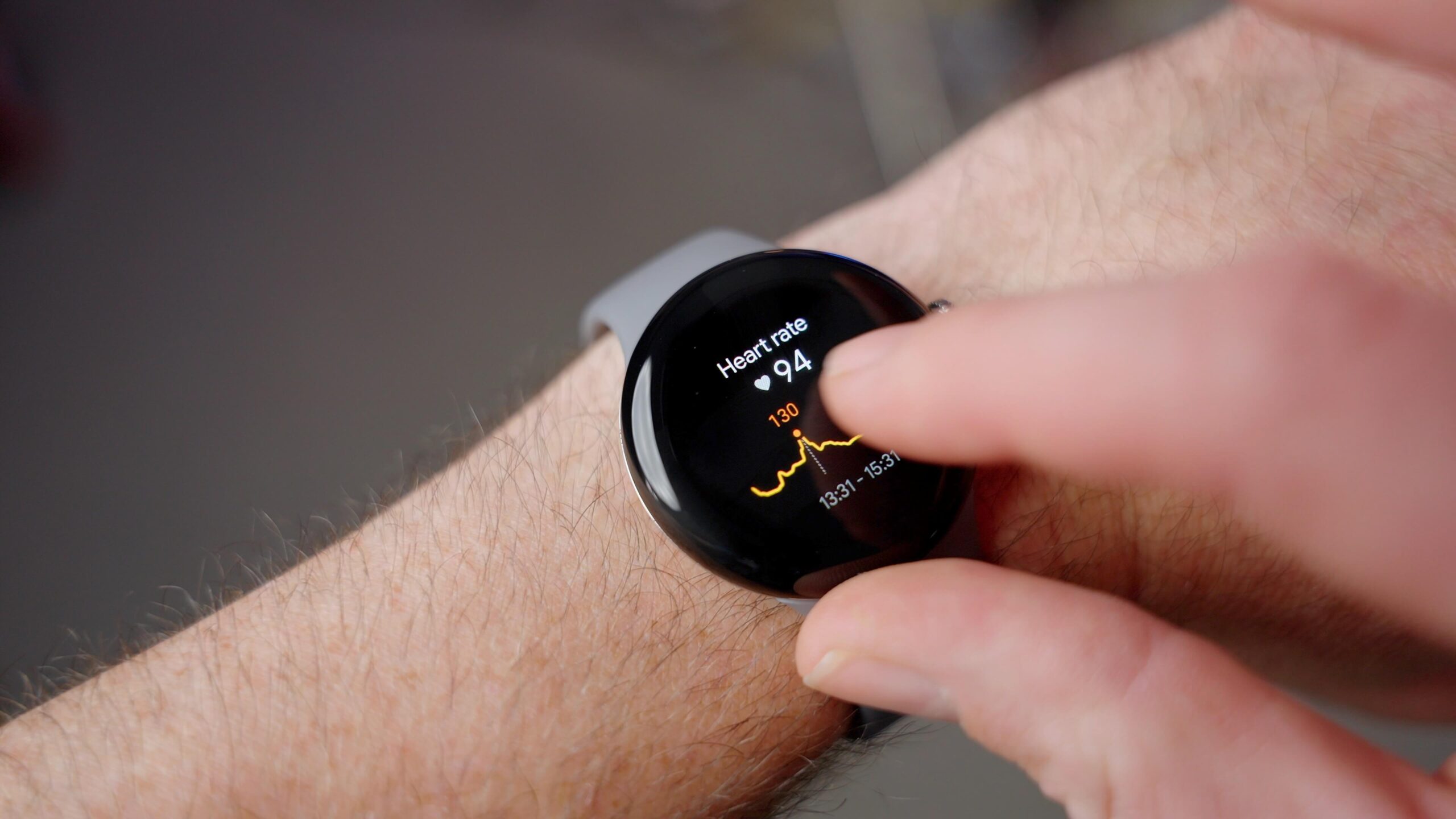 The biggest play for the Pixel Watch, however, is heart rate tracking. Google calls it Fitbit’s most accurate tracker yet, due to the fact that it runs constantly throughout the day. It actually reads your heart rate like the time – second by second. As a result, this is the only smartwatch I’ve used where I’ve felt inclined to place a heart rate complication on the watch’s face.

I have no way of verifying the data the Pixel Watch generates, but given its convenient size for workouts, the immersive Fitbit experience, and the promise of fall detection and emergency SOS later this year, it has ticked the fitness box, big time.

Google Assistant has, in my experience, always been one step ahead of the rest. 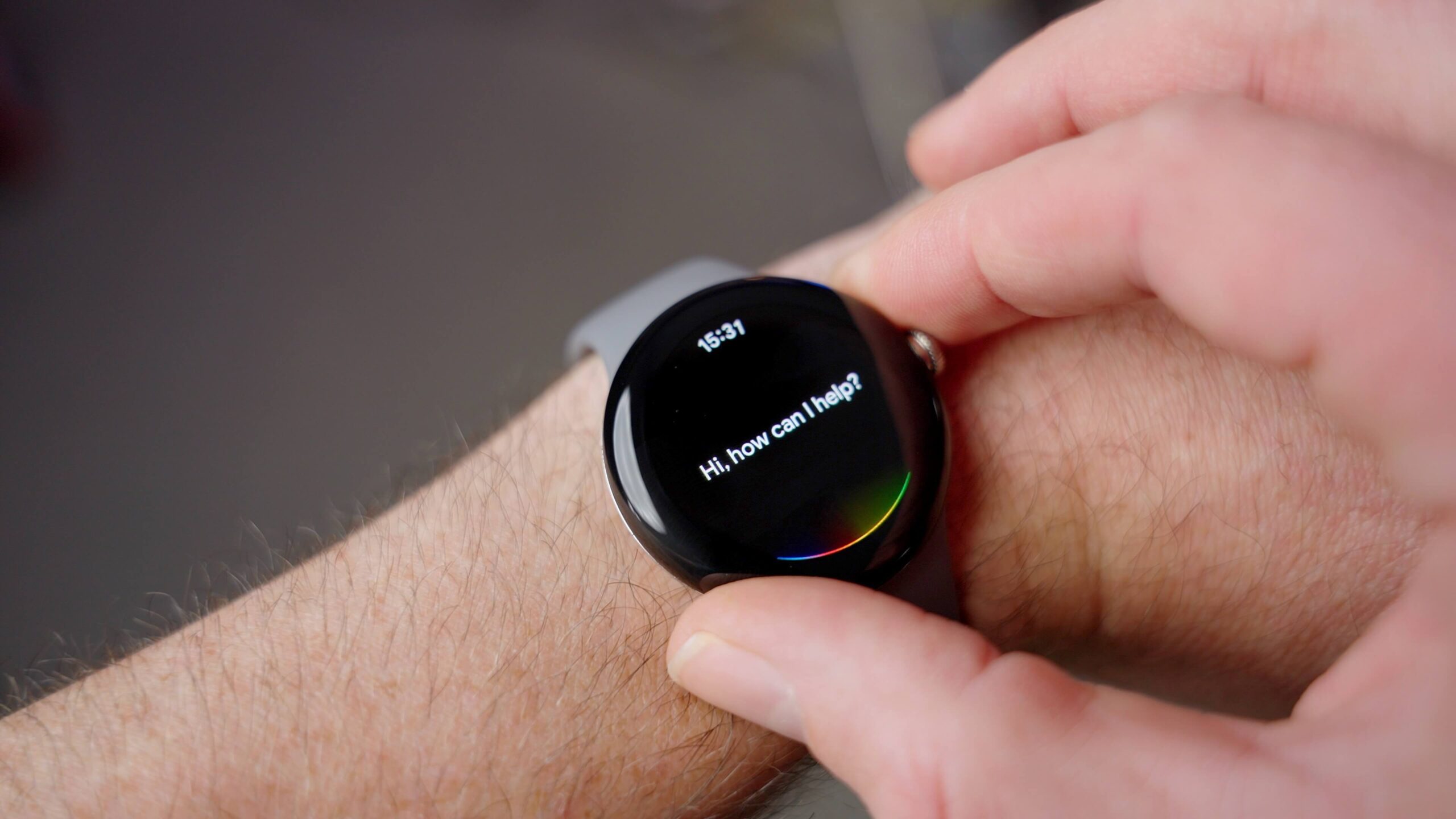 Siri is increasingly dimwitted and fails to respond satisfactorily to even the most obvious of questions – choosing instead to point you to what amounts to a Google search you could have carried out yourself. Alexa gets more stupid and irritating over time and Samsung’s… what’s he called… Barry? Bertie? Bill? Whatever – no one knows it exists.

By comparison, Google Assistant has always understood me perfectly, responds super-fast, and delivers genuinely useful answers. Having this on your wrist is absolutely game-changing.

The speed with which Google Assistant repeats your spoken words on that tiny little Pixel Watch screen is genuinely impressive. And you can do so much with it; beyond the standard stuff like setting reminders, starting timers, and responding to messages, you can ask your Pixel Watch all manner of inane questions and marvel as it delivers a response that doesn’t leave you fumbling for your phone.

Google Assistant on the Pixel Watch is a surprise selling point for me – I can see why it has been highlighted so consistently by Google in its marketing strategy.

Right – a confession. During my first week of wearing the Pixel Watch, I had no idea there was the option of an always-on display. Stupidly, I assumed there wasn’t one.

There is. And it’s in the most obvious section within the settings app. 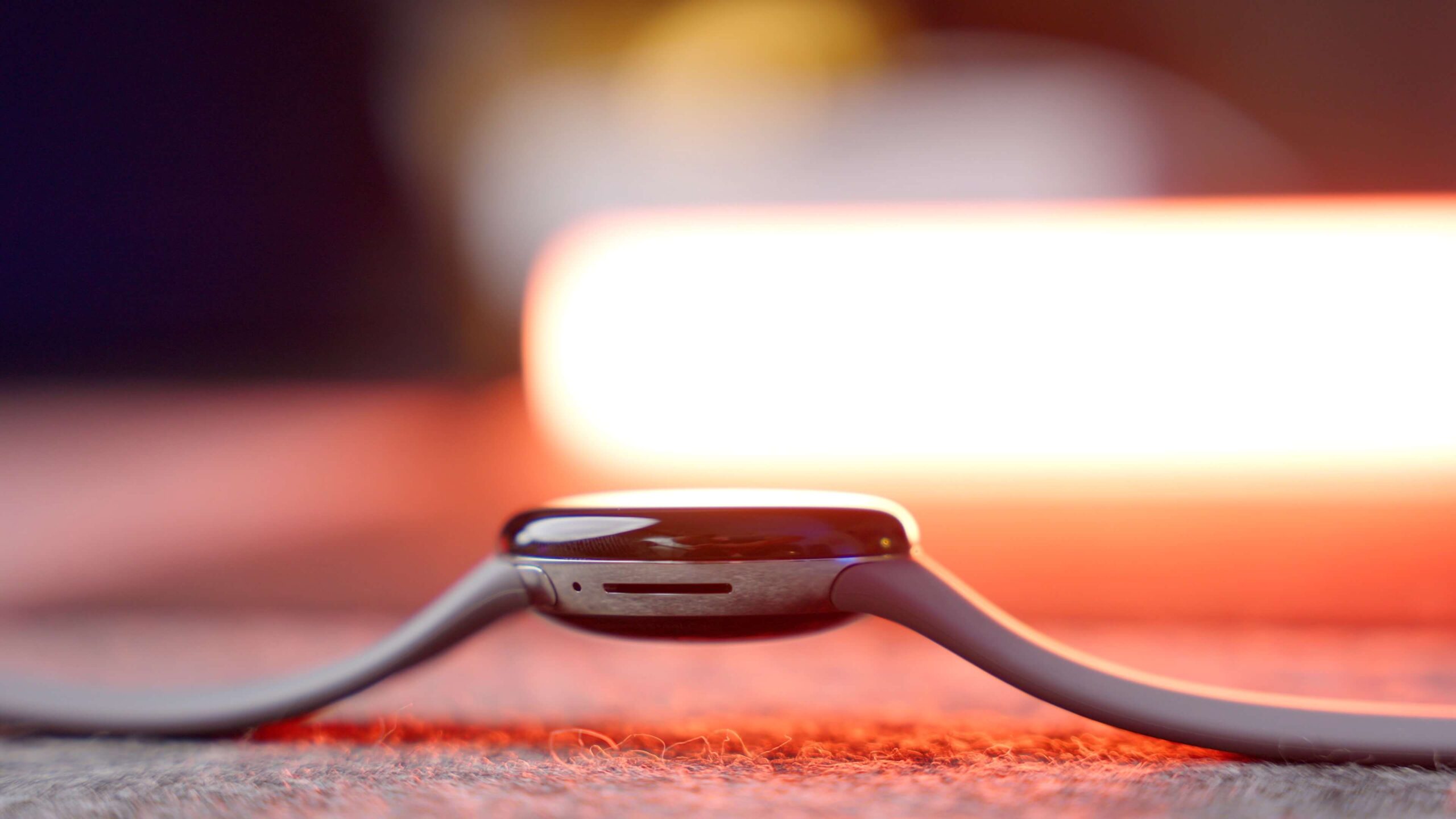 So, I need to spend more time testing the battery with the always-on display… on, but with it off, I can confirm that it sails through a day with no problem at all.

In fact, it can go further. During a recent trip to London, the Pixel Watch recorded 36,000 steps and 18 miles as I wandered around the capital testing the Pixel 7 series phones. By 9:30pm that night there was still 46% left, which I think is rather admirable.

I then wore it to bed, tracked my sleep, and woke up to find 18% of the battery still remaining.

In normal everyday use, the Pixel Watch battery performs identically to that of the Apple Watch. Getting through a day and night of sleep tracking is no trouble at all, but you will need to charge it the next day.

I really like the Google Pixel Watch. I love the round face, I’m reassured by the fact that Wear OS feels nice and smooth, and the battery life is both adequate and occasionally surprising. 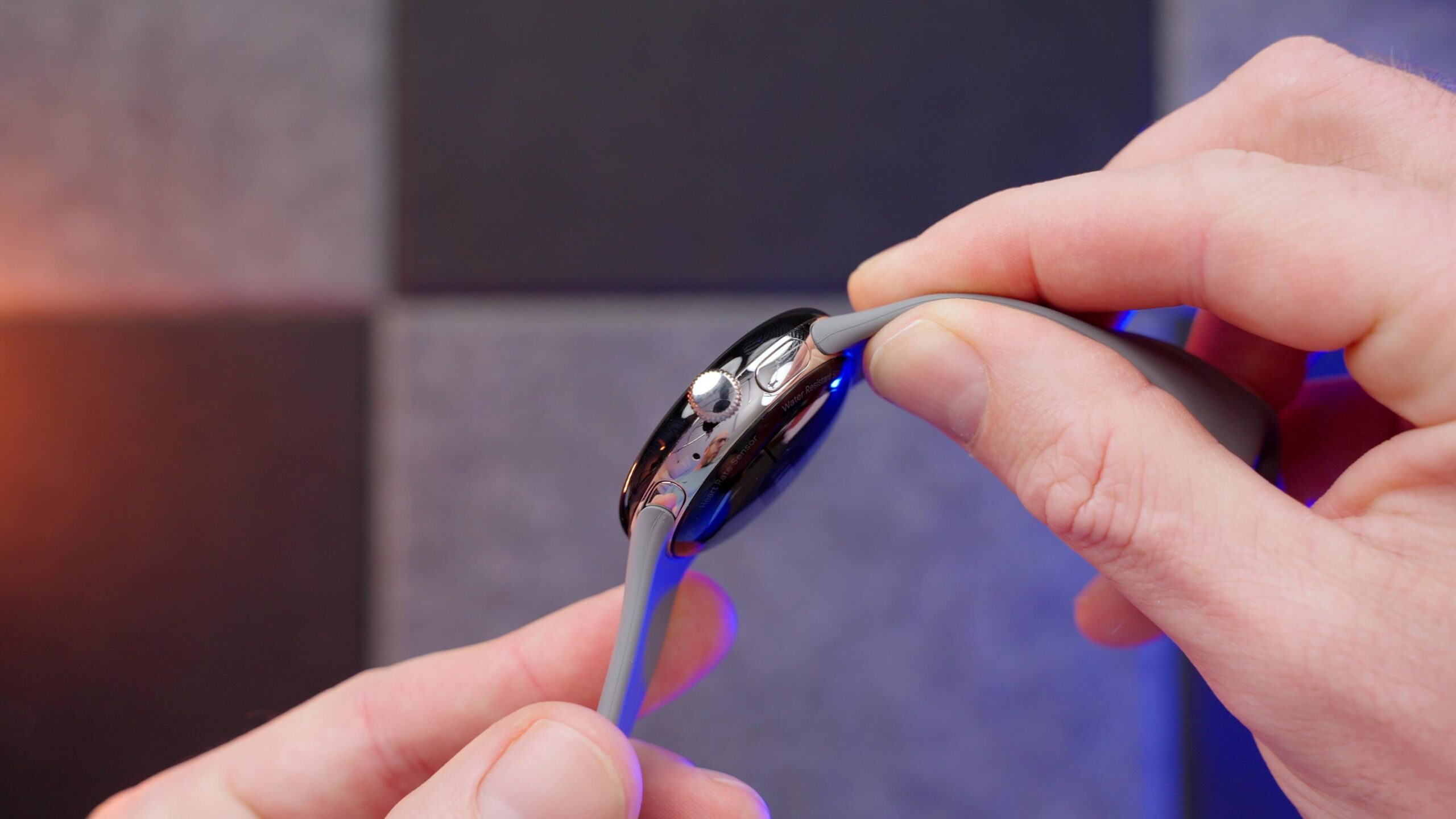 The Fitbit hookup also makes total sense, and it’s a smart shortcut by Google to ensure that the Pixel Watch has the best possible start to life as a fitness device.

Alas, the design doesn’t quite work for me. I like big watches, therefore adapting to the dainty nature of the Pixel Watch is taking longer than I’d hoped.

I’m not far off accepting it, though, because it’s pretty easy to look past personal design preferences when the pricing, positioning, and performance are all bang on. 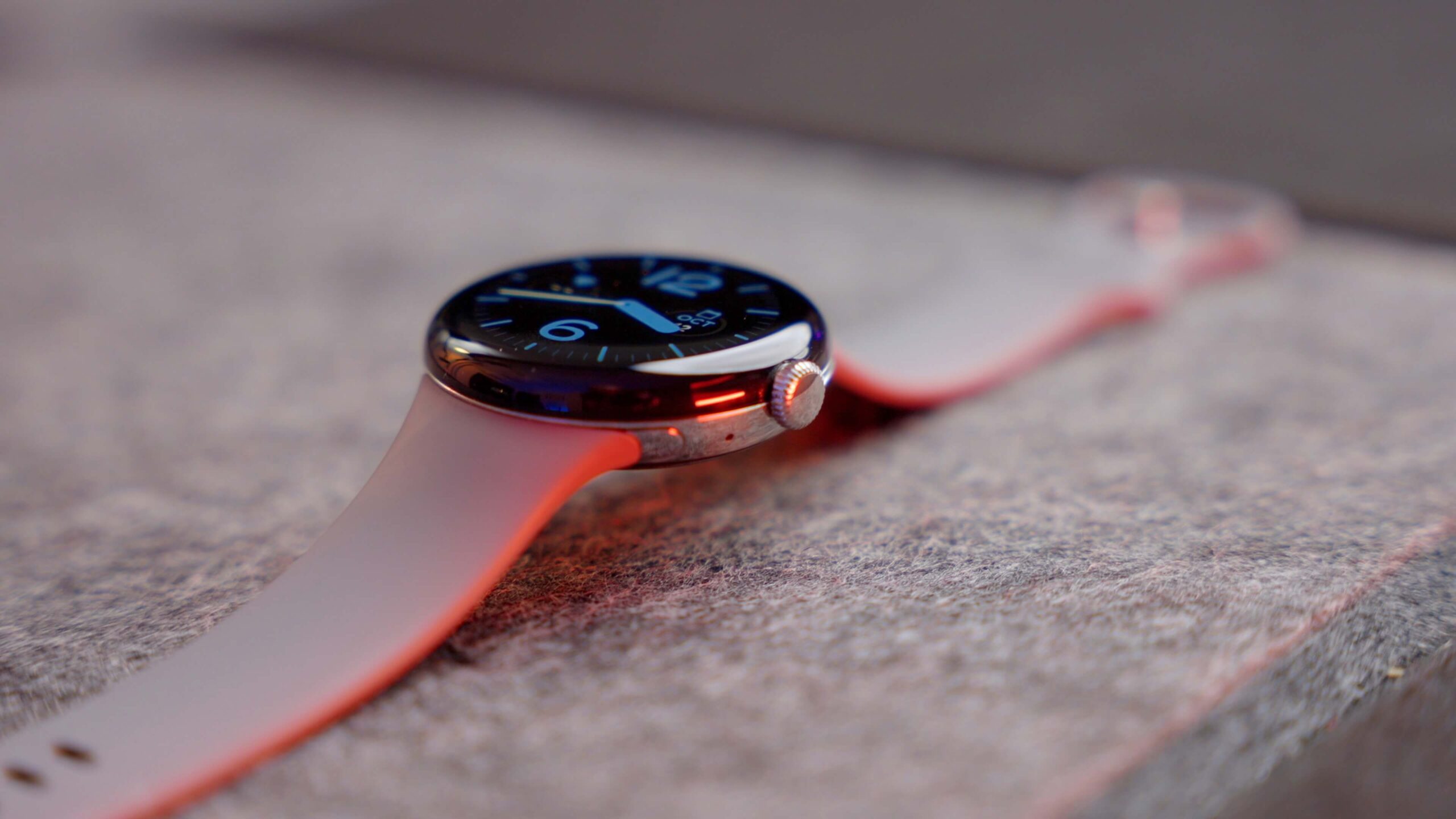 As a first entrant for Google into the smartwatch hardware space, the Pixel Watch is a superb debut and will make many a Pixel owner very happy indeed.

The Apple Watch really does need to keep a close eye on its tail. If Google continues to iterate the Pixel Watch and – please, guys – adds a larger option to the lineup, it makes for a very compelling alternative.