I recently made note of the key updates and features that will make me buy the next iMac.

The Apple Magic Keyboard isn’t one of them.

Don’t get me wrong – I love the keyboard that comes with the iMac. I’m also a big fan of the new keyboards we’ve finally been treated to on MacBooks. After what was arguably one of their biggest missteps ever with the butterfly design, Apple does appear to have got its keyboard game back on track.

If you’ve not tried a mechanical keyboard yet yourself, you’re missing out.

What is a mechanical keyboard?

For me (and, I suspect, many others), mechanical keyboards remind me of the keyboards we used to use at school; those great, big hulking grey devices which clicked and clacked in IT classes and had what seemed like bottom-less key travel.

They also remind me, somewhat wonderfully, of the Amiga 500 I had as a kid. Which was pretty special.

But, these days, I do a lot of typing. And I’ve been conscious for quite some time that the type of keyboard you use can have a significant impact on your ability to type quickly and, crucially, enjoy the process of getting words down.

A disclaimer: I know nothing about mechanical keyboards. I haven’t read up on the different types of switches, nor do I have much of an interest in their inner workings. I just fancied giving them a go.

So, what follows is a complete novice’s experience of mechanical keyboards. If that sounds like you and, like me, you’ve been tempted, here’s what I’ve discovered while using them with my 27” iMac and M1 Mac mini.

First things first. If you grab yourself a mechanical keyboard after reading this, it will feel odd to type on. You may even dislike that initial experience.

This is particularly the case if you’ve been using an Apple (or similar) keyboard with relatively limited key travel.

That’s the biggest difference you’ll notice, to be honest. The key travel on mechanical keyboards, although different from model to model, is significant compared to a laptop keyboard or Apple Magic Keyboard.

This demands a different typing style and plenty of patience as you get used to it. You can’t be a lazy typist like I am; each keystroke needs to be measured, accurate and fluid.

But don’t let that put you off. Stick with it – because there are some serious upsides.

It’ll make you a better typist

Once you get over that initial mechanical keyboard weirdness, you’ll become a better typist, and you’ll even grow to love it.

The sound (which I’ll get onto in a moment) and the sponginess of the key travel becomes pretty addictive after a while, and while you will indeed make plenty of mistakes to start with, you’ll slowly raise your typing ability without even realising it.

I’m definitely a better typist since I started using mechanical keyboards. And the result of that is higher levels of productivity and, crucially, fewer mistakes.

The sound. Oh, the sound.

It might not be particularly pleasant to listen to for everyone in your office (more on that later), but there’s definitely some magic going on between the sound those keys make and the desire to create and get stuff done. I actually relish sitting down and typing on these keyboards, and the end of every sentence spurs me onto the next.

A feeling of nostalgia (and ultra-reliability)

If you’re into nostalgic stuff, then you absolutely need a mechanical keyboard. The models I’ve been testing are considerately designed with oodles of references to the past. But they somehow look entirely modern, too.

They are, without a doubt, beautifully designed and lovingly engineered. I’m yet to come across a mechanical keyboard that isn’t. This is clearly a sector that has some very passionate people working at the heart of it.

The result of this isn’t just skin deep, either. Each keyboard I’ve used feels completely bullet-proof. And, because those keys and switches are replaceable, I have zero fear about the entire unit needing to be replaced. If something goes wrong, I can easily pop off the offending key and replace it.

I receive a huge number of comments on my YouTube channel from people wanting to know what keyboard I’m using.

This is for good reason. I feature them regularly in b-roll footage, simply because they look so good. But even when just a corner of the keyboard is poking out at the bottom of the frame, it invariably catches someone’s eye.

It’s why I decided to look into them in more detail and write this article; people are clearly fascinated by – and drawn to – mechanical keyboards.

Mechanical keyboards aren’t perfect, and they certainly aren’t for everyone.

Firstly, there’s the sound. ASMR comparisons aside, it is loud. This is fine if you work in a room on your own, but if you work in an office with others or intend to take such a keyboard out and about with you, you won’t make many friends.

Then, there’s the technique required. As noted earlier, mechanical keyboards take some getting used to. I suspect that for some people, it’ll be too big a leap from something like the Apple Magic Keyboard. If you’re a lazy typist like I am, you’ll probably make far too many mistakes and end up wanting to throw the keyboard out of your window.

Lastly, it’s practically impossible to surreptitiously use a mechanical keyboard on a Zoom call.

While everyone else is talking, you decide to bash out that email you’ve been putting off, don’t you? I know I do.

For that task, trust me – you’ll need a backup, quieter keyboard.

A quick note on RGB lights

You can order most mechanical keyboards with RGB lights. These are simply illuminated key switches which glow different colours.

You can change the colours and the patterns generated by the lights. It’s like there’s a mini disco taking place underneath your keys.

I have zero idea why this feature appears to be so prevalent on mechanical keyboards. It looks really cool, but it drains the battery life and serves no obvious purpose.

Although, it is great for b-roll.

4 mechanical keyboards to check out

If you’re tempted to try out a mechanical keyboard yourself, I’ve been testing four since the start of 2021. Here are my experiences. 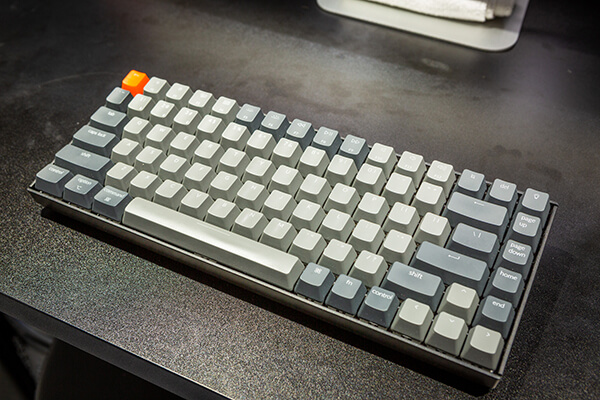 It’s an immediately approachable keyboard and has such a small footprint. It’s also the keyboard of choice for tech YouTube superstar MKBHD, so it can’t be bad. 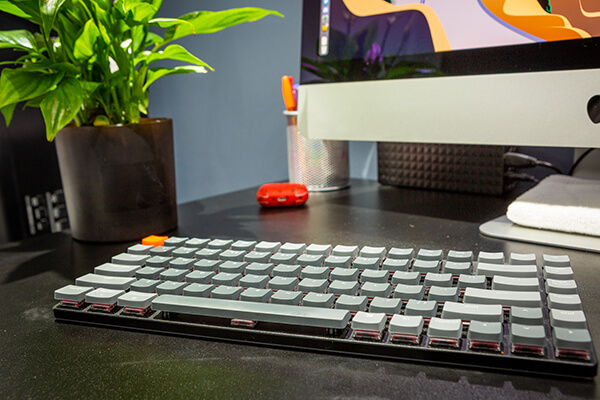 If the K2 is still a little bulky for you and you want something with more of an Apple Magic Keyboard aesthetic and footprint, the K3 is definitely worth a look.

The bezel-less design and exposed switches look really cool, and it’s impressive how slim Keychron has managed to make the K3. It also has a softer feel and slightly less key travel than the K2.

Although I’ve not used it for this purpose (yet), I suspect that the K3 would make for a wonderful travel keyboard, too. The keys are also noticeably quieter than the others in this list. 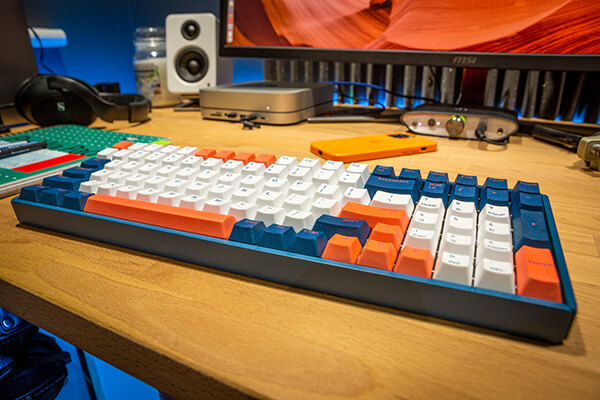 We’re into serious mechanical keyboard territory now. The IQUNIX F96 is the most expensive keyboard on this list, but it’s also my favourite.

The first thing that hits you is the weight; the F96 is heavy. But, for me, it’s pleasingly heavy. It feels premium and as though you could run it over with your car without fear.

Operationally, I think the F96 strikes the perfect balance between key travel and usability. It’s not unapproachable for novices like myself but retains all of the wonderful noise and tactility which makes mechanical keyboards so joyful to use.

It also has a numeric keypad, which I didn’t realise I missed until now.

If you’ve got the budget for it, the F96 is a fantastic choice. 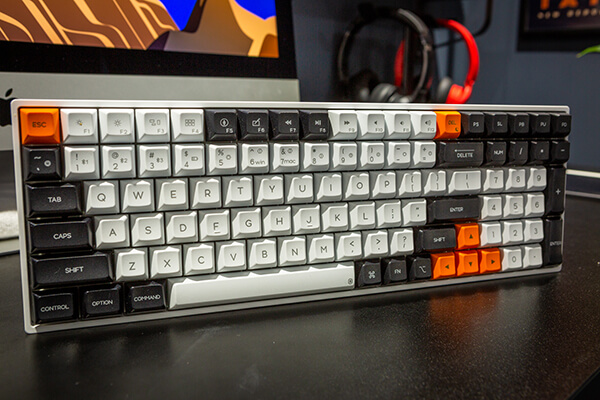 Epomaker has an eclectic range of keyboards, but the GK96XS is arguably their most subtly designed.

If the IQUNIX F96 is too expensive for you, this is an ideal alternative. It’s well made, the key travel is approachable and it has that numeric keypad, too.

Have I tempted you to investigate the world of mechanical keyboards? What else should I check out? Get involved in the comments!