I am currently addicted to Building a Second Brain by Tiago Forte.

If you’ve not heard of this concept before, I’ll explain what a ‘second brain’ is in a moment, but I’d like to first confirm that Forte’s book has completely transformed my relationship with Apple Notes – in one weekend.

It’s the guide I didn’t know I needed. More impressively, it’s a guide that has revealed just how bad I’ve been at note-taking for my entire adult life.

Building a Second Brain has also indirectly confirmed how useful Apple Notes can be, and why the approach Apple has taken with the app’s development is anything but lacklustre. In fact, I think they’ve completely nailed it.

Oh, and I’m in no way affiliated with Tiago (or his book) and this blog post isn’t sponsored. I’m just a massive fan already.

What is a second brain?

If you’re like me, you’ve probably got notes scattered everywhere. I’ve talked about this a fair bit in the past; my notes are strewn across Apple Notes, Notability, and, occasionally, traditional pen and paper.

As a result, I rarely benefit from the notes I’m taking. I’ll jot down thoughts, grab clips from websites, take photos of stuff that inspires me, and note down the salient points from each meeting I attend.

But I rarely do anything with this stuff. It just lies in whatever form it was taken, dormant, unloved, and in no way capable of benefitting my business or personal growth.

Tiago Forte thinks he has the answer to this, and he calls it the ‘second brain’. It’s one of those blindingly simple concepts that you wish you’d known years ago and it revolves around four steps known as CODE:

The idea is that you make note-taking a habit. If something surprises or inspires, you note it down (i.e. collect), but don’t worry too much about why you’re writing it down – that comes later. Just file it away in your notes app to ensure that thought isn’t lost forever.

Within your notes app (which is the vehicle for your second brain) Forte recommends using a system called ‘PARA’ to organise your notes. This encourages you to place each note in one of four areas: projects, areas, resources, or archives.

I won’t go into the specifics of CODE or PARA, because I’ll only butcher their definitions, but suffice to say they both result in a note-taking and filing system that immediately makes sense. Rather than simply taking notes and either leaving them disorganised or chucked into category folders, they’re saved based on actionability.

Why I needed a second brain

Like most businesses, Mark Ellis Reviews consists of many concurrent projects, processes, strategies, and goals. I’m pretty good at keeping track of those things in Notion and TickTick, but I’ve always struggled when it comes to knowledge management.

It’s one of those things that I’ve always known to be an issue, but which I’ve never bothered to sort out. Reorganising my notes and adjusting the way I take notes has felt like a herculean task until now. Where to start? What to do with all of those historic notes? Which app should I use? How can I compile both hand-written and typed notes?

Despite this, I’ve always loved the thought of being a productive note-taker. The idea of having a wealth of knowledge filed away that I can call on at any time is inspiring. But the reality is quite different; like so many people, I write stuff down, save interesting webpages, and make lists – and then fail to do anything with any of that stuff.

Within the first few minutes of reading Forte’s book, I knew he was onto something; it looked like he had an answer for my note-taking woes.

I just needed an app to help me design my second brain.

I’ve tried lots of notes apps, but I always seem to come back to Apple Notes.

For instance, I was an Evernote user for several years, but that app became incredibly bloated as it was continually overdeveloped. Note-taking, by its very purpose, should be as simple, lightweight and frictionless as possible – Evernote became the antithesis of that for me.

The team behind Apple Notes understands this concept. Yes, it has taken a rather long time for them to grant it the features that countless third-party apps implemented many years ago, but that’s what Apple does. The lovely thing about Notes is that it has just the right amount of features to make it the perfect second brain.

Apple Notes allows you to create multiple folders and nested folders, which is pretty much all you need to get going with a second brain. The notes themselves start life as simple pieces of text that can be formatted and which can expand to include images, web clippings, tables, and checklists, if you want.

More importantly, Apple Notes offers all of the capture tools I need. I can create Quick Notes no matter where I am within iOS, iPadOS, or macOS, add notes that reference specific passages of text on a webpage, and Siri has me covered when my hands are tied.

I’m traditionally a very light Siri user, and barely ever use dictation. However, this might change, big time, thanks to the forthcoming improvements to dictation announced at WWDC and my Forte-inspired desire to capture every useful idea and thought.

Apple Notes was the obvious choice for my second brain, and I’d recommend you start there if you’re keen on building one yourself.

How I’ve configured my second brain

I’ll dive into this a little deeper after I’ve spent more time with my second brain, but here’s a glimpse of how I’ve configured it thus far in Apple Notes. 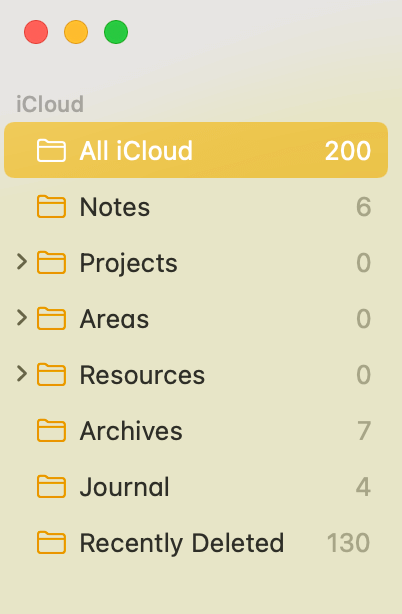 This is how I’m using them:

Before creating these folders in Notes, I deleted a huge number of legacy notes I no longer needed. I’d recommend doing that if, like me, Notes has always been your dumping ground for takeaway orders, window blind measurements, and shopping lists.

Next, I embarked on the surprisingly simple task of organising the remaining notes into the folders that made the most sense.

Simple, right? Admittedly, the difference between Areas and Resources has taken a bit of figuring out, but as noted earlier (excuse the pun), I’ll return with more thoughts on how this second brain configuration performs day-to-day.

I feel so much more organised already. Tiago Forte has inspired me to get serious about building my own personal knowledge bank and to finally become a better note-taker.

I think Apple Notes will be the perfect second brain tool for the foreseeable future. Combined with Notability and my iPad mini (the handwritten notes from which can be easily sent into Notes), I feel ready to conquer what remains of 2022.

Are you going to build your own second brain? Do you have one already? Get involved in the comments!