It’s been a fascinating seven weeks with the Apple Watch Ultra. I’ve taken it hiking, and… well, that’s it really.

I haven’t gone ultra running, mountain climbing, or scuba diving yet (more on the latter, in a moment). Although to be fair, I’d guess this is probably the case for most people who rushed to buy the Apple Watch Ultra at launch.

Like practically every other Apple Watch Ultra on the Planet, mine has simply been tasked with tracking the occasional blast of physical exercise and informing me of the 436th WhatsApp family group message of the day.

You do learn a lot about this device the more you wear it, though, which is why I’m going to keep updating you all with my experience with it – not least because I know a lot of you are considering buying one.

This was my greatest fear about the orange Alpine Loop, and I can sadly confirm that it does begin to age in a rather grubby way, alarmingly quickly.

I must reiterate that I haven’t done anything particularly crazy while wearing this watch. The most ‘Ultra’ thing I’ve undertaken was a ten-mile hike around the Peak District. Although there was plenty of walking during that trip, there wasn’t any climbing, scrambling, or crawling that could threaten the glistening orange glow emanating from that band.

I wear it regularly for runs and gym visits, and, to be fair, all I do once finished is run the sweat-drenched band under the tap for a few seconds. As a result, mine is now a slightly dull shade of orange (particularly on the section resting against my inner wrist) and the edges nearest the body of the watch are gradually turning grey.

Perhaps it just needs a good wash. But I do have my eyes on that Trail Loop.

This morning, I headed out for a run in Southampton. I don’t live in Southampton and know nothing about the local area, therefore I adopted my usual tactic of running for two miles in one direction from the hotel before backtracking my steps.

Only, this time, there were a couple of right turns involved – it wasn’t my preferred straight line. In truth, I could have probably found my way back to the hotel unaided, but it was comforting to have the Backtrack feature running on the Apple Watch Ultra compass app.

For the uninitiated, this tracks your exact steps and displays them on a miniature map which you can zoom in and out of with a twist of the Digital Crown. If Apple Maps has recorded the location of your parked car, that shows up on the watch, too. Super useful and reassuring.

I knew I needed this watch!

I mentioned earlier that I haven’t been scuba diving (and I will keep mentioning it until someone offers to ‘have me over’ to their far-flung scuba diving club to try it out). However, I have experienced Scuba Mode!

I don’t think it’s called that, but I can confirm that the Apple Watch Ultra changes immediately into a diving computer when you submerge it in a swimming pool.

Look, I have proof! 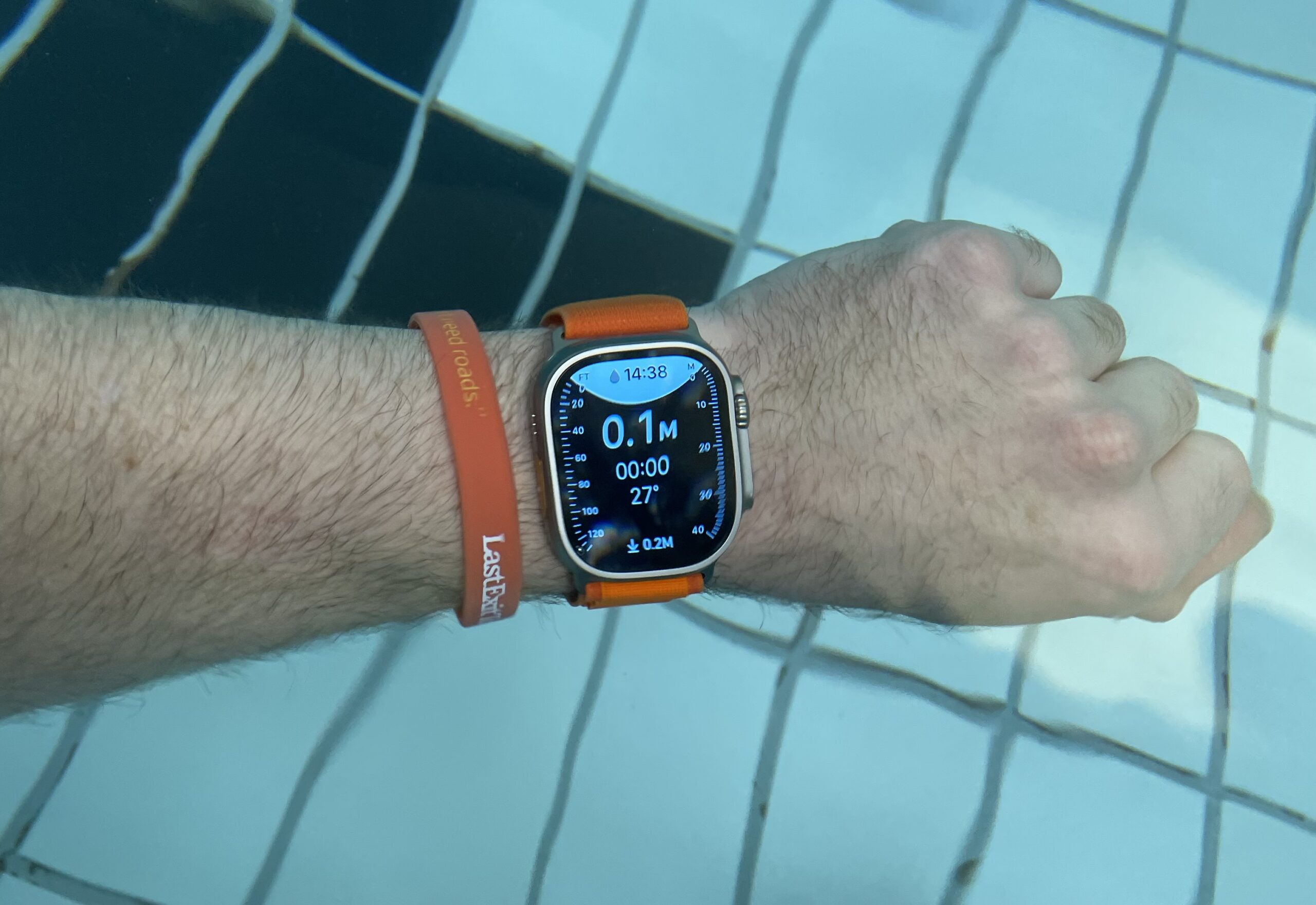 At this juncture, I should point out that this epic scuba adventure was actually my son’s first swimming experience at the local pool, where the Apple Watch Ultra plunged to the subterranean depths of, well, 0.1 meters.

Regardless, seeing all of those scuba diving numbers, metrics, and dials appear was super exciting. And it makes me want to go scuba diving even more.

4. I haven’t damaged it yet

As I’ve said from the start of my time with the Apple Watch Ultra, for all its tough talk and supposed heroics, this is still a device that you really wouldn’t want to inadvertently scrape against a garden wall.

I’m happy to report that I haven’t done that. Yet. But I have accidentally bashed it against a couple of door frames, walls, and kitchen cabinets.

None of those incidents has left a mark.

Maybe it is a tough little beast.

5. I’ve only met one other Apple Watch Ultra owner

I don’t think many people have bought the Apple Watch Ultra. This shouldn’t come as a surprise – it costs a not insignificant £849, no one needs it, and we’re heading into what is predicted to be one of the longest recessions since records began.

This might explain why I’ve only met one other Apple Watch owner in the last seven weeks (this excludes my YouTube mates because of course they all own Apple Watch Ultras). Just like me, this guy bought it because he just wanted it – there was no other reason for the purchase.

Since buying it, however, he has immediately fallen in love with his huge new wrist computer. He’s even taken up indoor climbing in a bid, I assume, to justify the purchase.

I know from my comments sections that there are plenty of other Ultra owners out there, but boy are you keeping yourselves out of the spotlight in public!

I’m not sure what else to say about the Apple Watch Ultra’s battery life at the moment. It is by far one of the most important elements of this device, but it, unfortunately, remains the biggest elephant in the room, too.

It just cannot compete with the other ultra-fitness watches out there. The likes of Garmin have enjoyed a significant head start in this game and offer watches that are doing an awful lot less behind the scenes than the Apple Watch Ultra. It’s no wonder Apple’s drains its battery faster than the competition.

In my experience, this is, at an extreme push, a three-day smartwatch. But that is really pushing it. I eagerly await the super low power mode we were promised, which I’ll be testing fully during a hiking trip next February.

However, the fact remains that if you’re looking for a serious fitness watch that can last the distance, the Apple Watch Ultra probably isn’t the one to buy.

I haven’t changed my mind during these seven weeks – the Apple Watch Ultra remains Apple’s best product of 2022.

If you’ve been pondering buying one yourself, my advice is simple: buy it. If the budget is sitting in your bank account and you have nothing else more exciting to spend it on, just place that order now.

The caveat remains, though: please go and try one in-store before you commit to the purchase. Remember – this is a big watch, and only suits certain wrists and tastes. But if the fit and look work for you, there is literally no way you can be disappointed with this thing.