Apple Studio Display Review – Is It Worth It?

Apple Studio Display Review – Is It Worth It?

I’ve been waiting a long time for a new Apple display.

Now, I have one. It’s called the Apple Studio Display, and, if the comments thread of my video review is anything to go by, it has completely divided opinion.

I purposefully avoided all of the reviews before I offered my first impressions of Apple’s new 5K monitor. But I’d heard on the grapevine that it hadn’t been particularly well-received.

So, what’s going on? 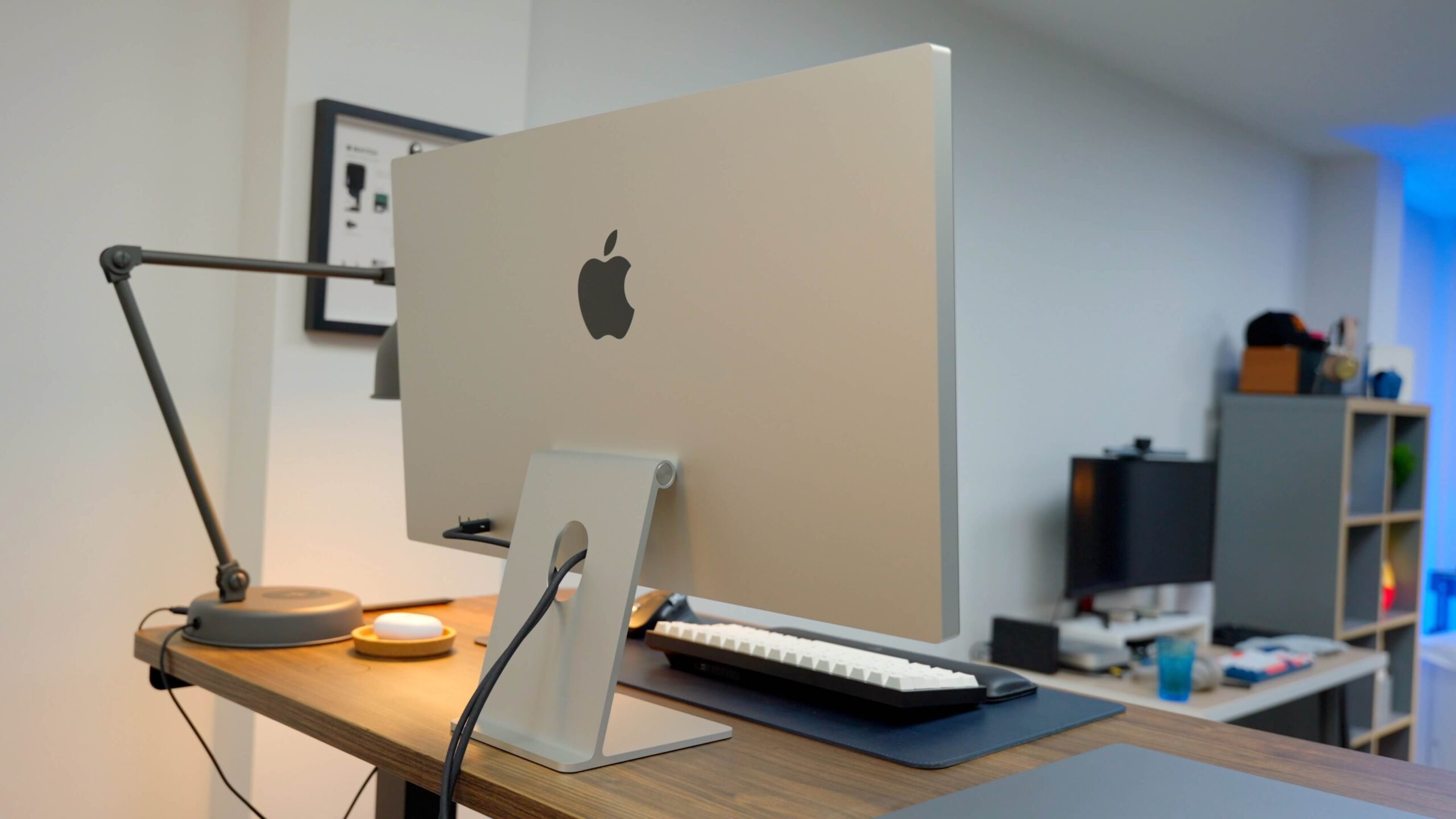 The base model comes complete with a tilt-adjustable stand and a one-meter thunderbolt cable. But you can significantly increase the price of the Studio Display if you want to.

Fancy a tilt- and height-adjustable stand? That’ll set you back an additional £400 (a VESA mount is available for no extra cost). Opt for the nano-texture glass to reduce glare, and you’ll be asked for £250.

In fact, if you add everything to the basket – including AppleCare+ – you’ll spend an eye-watering £2,268 on the Studio Display.

So, what do you get for your hard-earned cash?

The best way to describe the Studio Display is somewhere between a chunky new iMac and a modern version of the Apple Cinema Display. 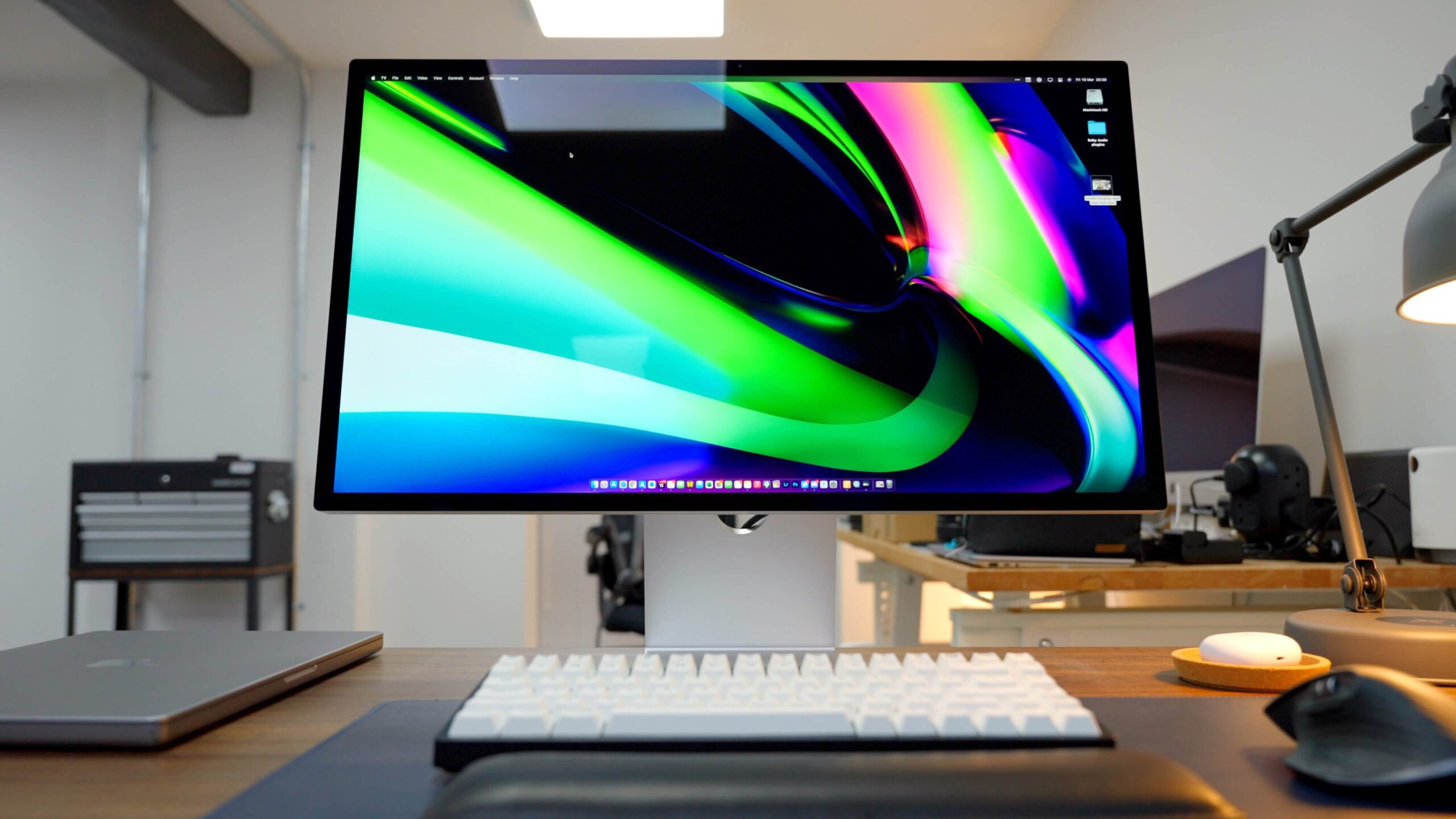 It shares the same tilt stand and hinge as the 24-inch iMac, and really is very reminiscent of Apple’s last foray into the world of desktop displays, minus the Apple logo on the front.

Crafted from a solid block of aluminium, the Studio Display is pleasingly heavy and built like a tank. Ask Apple to make a monitor, and this is the inevitable result; it won’t look anything but relentlessly pretty on any desk.

The thunderbolt and power cables are great, too. They’re braided and feel capable of dealing with plenty of pulling and folding. It’s just a shame the thunderbolt cable is only one meter in length, and the power cable isn’t of the MagSafe variety (there has been lots of confusion over whether you can or can’t remove it – I haven’t been brave enough to give it a thorough yank).

Overall, the Studio Display is a stunning looking monitor. This is where a great deal of the expense goes; you won’t feel short-changed when it comes to aesthetics and build quality.

But is that enough?

The display: haven’t we met before?

The Studio Display is a 27-inch iMac screen with 100 nits of additional brightness. That’s pretty much all you need to know. 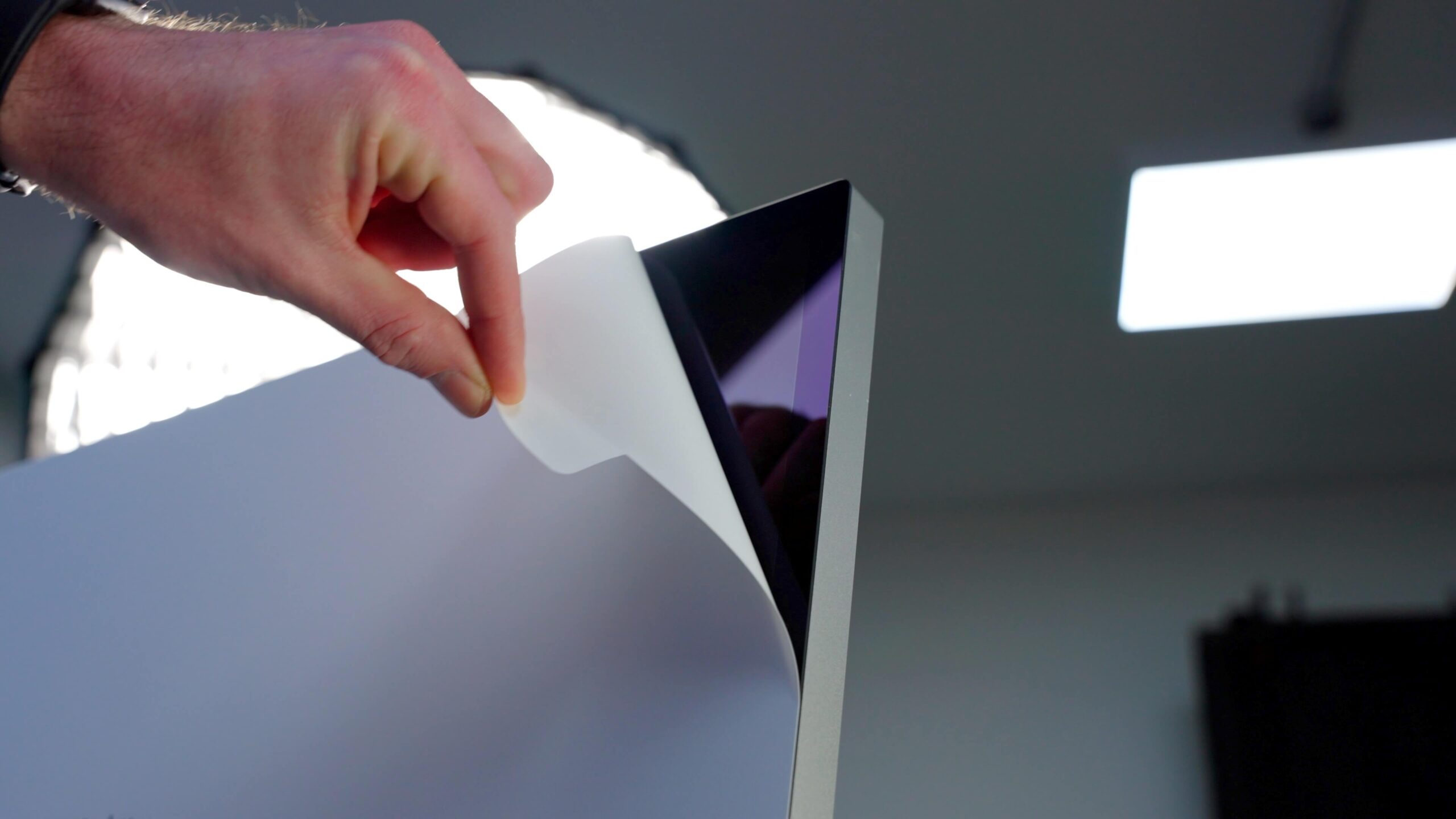 Those 100 nits make for a noticeably brighter display than my 27-inch iMac, but everything else is identical. The sharpness, colour accuracy, and contrast is completely iMac-like.

The only difference I’ve noted beyond those extra nits is the screen uniformity, which is noticeably better on the Studio Display compared to my iMac, which suffers from a few dark spots here and there.

So, if you’re familiar with any of Apple’s retina iMac screens, you’ll feel right at home with the Studio Display – it’s lovely.

But there’s a problem.

As noted earlier, this is a seriously expensive monitor. And at £1,499, I’d expect a little more than an iMac with the computer bit removed.

For instance, it’s a 60Hz panel. Compare it against the ProMotion display on my 16-inch MacBook Pro, and the difference is noticeable. The mouse pointer is smoother on the MacBook, and macOS feels more buttery overall as a result of that 120Hz refresh rate.

There are, possibly, technical limitations with the Studio Display’s screen technology which limit the maximum refresh rate, but why didn’t Apple see it fit to throw in a mini LED panel like the one in the new MacBook Pro?

The display technology used in this Studio Display gives the clearest indication that the entire unit is built for profit. I don’t blame Apple for that, but it’s disappointing not to be given the latest features on a screen that isn’t that much cheaper than the now discontinued 27-inch iMac.

The Studio Display does actually have some computer-like internals in the form of an A13 chip. Although this simply powers the “Hey Siri” functionality, Spatial Audio speaker system, and webcam. 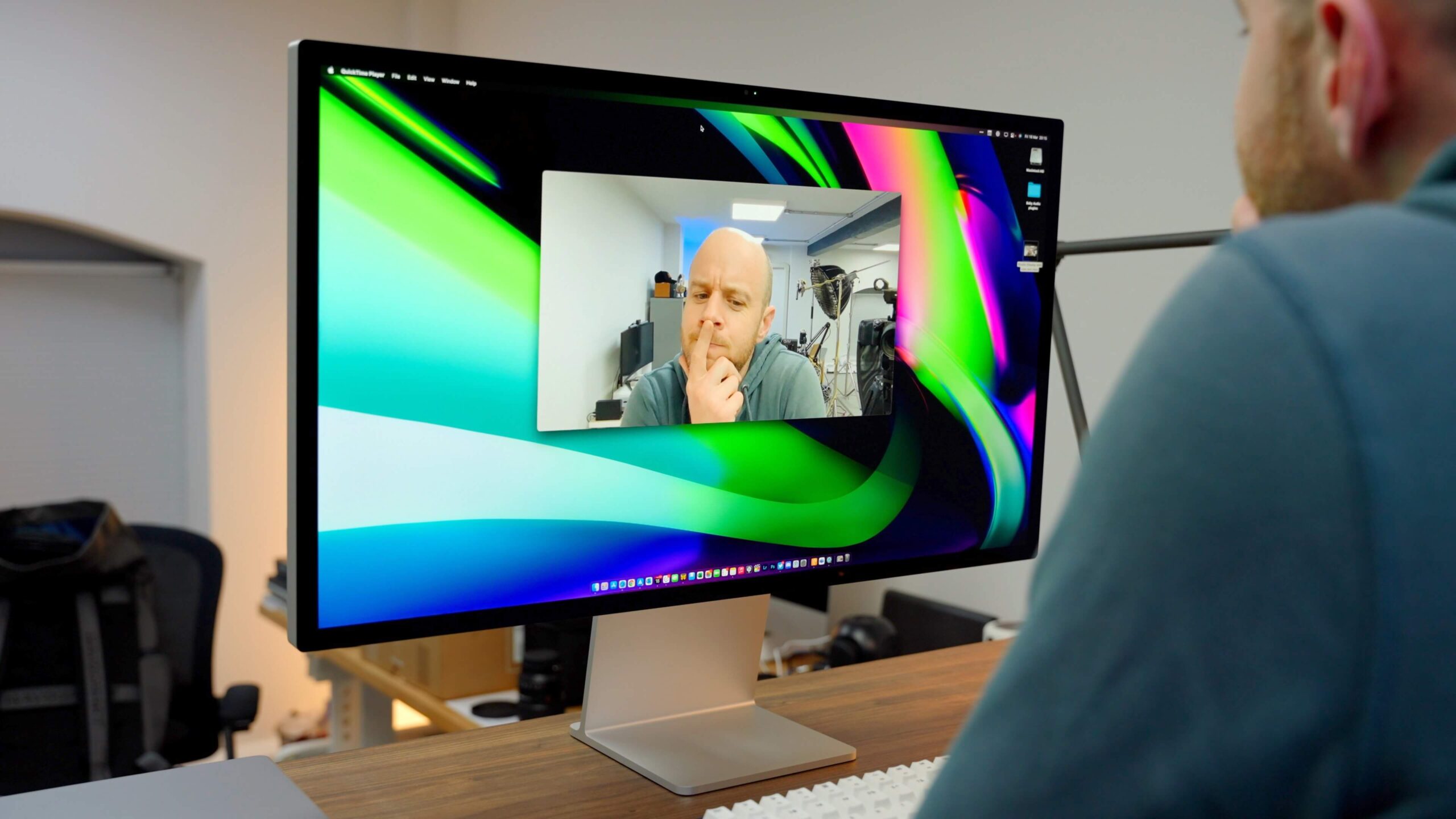 Let’s cover off the webcam first. It is terrible. It doesn’t look anything like the examples Apple showed during the launch event and has garnered a collective ‘thumbs-down’ from reviewers – me included.

We’re told that a software update is on the way to supposedly fix a bug that is causing the poor quality. I’m not convinced. The Studio Display’s camera smells of cheap hardware, which again may point to the profitability-maximising work going on behind-the-scenes with this monitor.

I just can’t see how a software update is going to fix it, but I will of course report back when it is issued.

As for the speakers – they’re great, as far as monitor speakers go. They won’t replace your HiFi, and Spatial Audio is a complete gimmick in this form, but this monitor is loud, detailed and punchy enough to make for enjoyable incidental listening.

When it comes to connectivity, the Studio Display features one thunderbolt port for your Mac and three USB-C ports. The latter are plenty fast enough for external SSD drives (I managed to edit 4K video footage happily from one), and the thunderbolt port makes for a super-satisfying experience for MacBook users.

It’s an incredibly neat set-up for someone like me. All I need to do is connect one cable between the Studio Display and my MacBook Pro, and I’m good to go – no separate power supply for the laptop required.

Conclusion: is the Apple Studio display worth it?

This is a £1,000/$1,000 monitor. The build quality and looks go some way to justify the money Apple is asking for, but the novelty of those things soon wears off, leaving you with the most important part of the Studio Display: value for money. 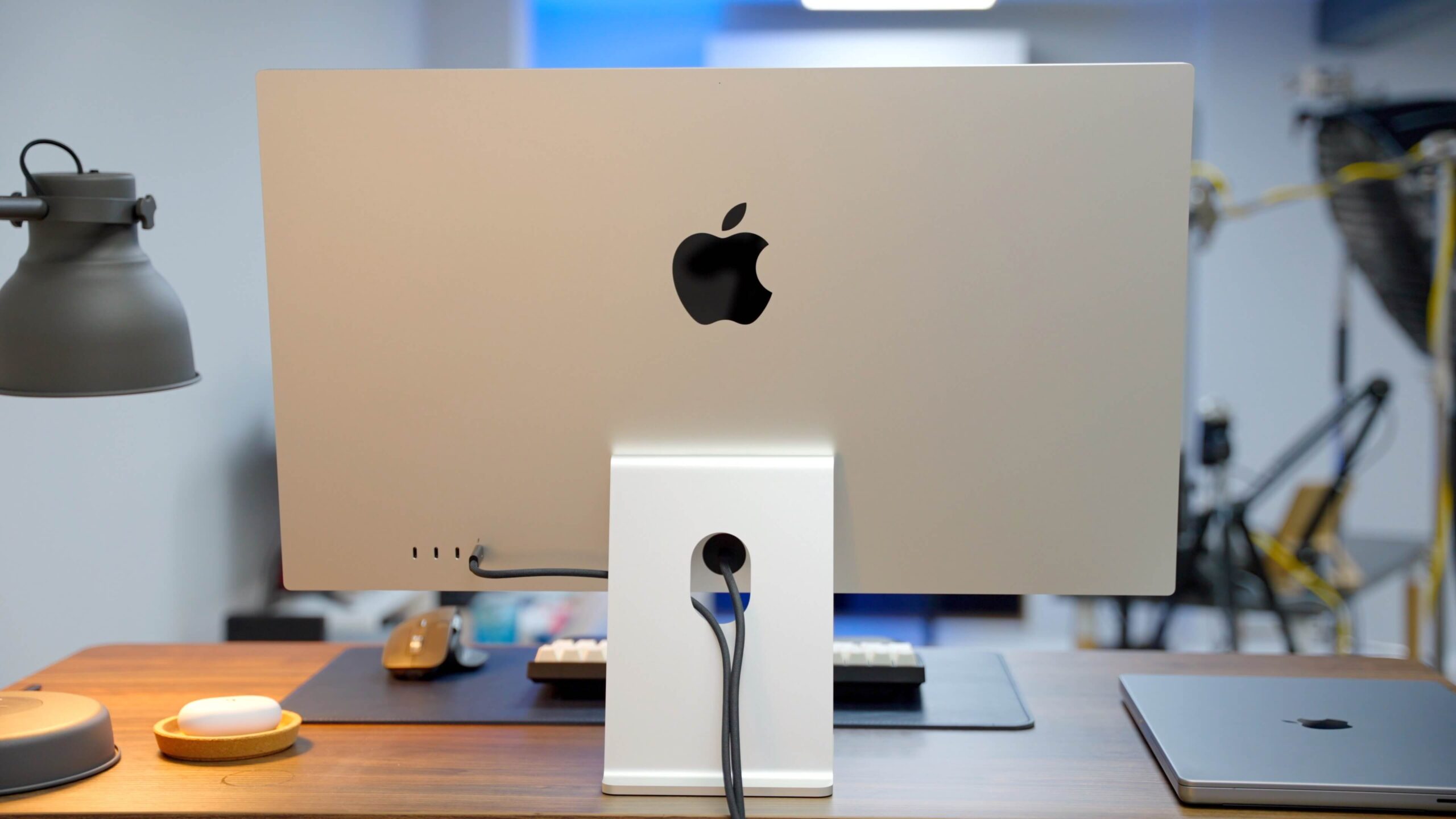 It doesn’t deliver in this regard, I’m afraid. Staunch Apple fans and those with deep pockets will love it, and indeed admire Apple’s simple, stylish approach. But conscientious buyers will have a hard time justifying the lofty price tag for what is the relatively old screen technology.

Apple is smart, though. Tim and co. know exactly what they’re doing; indeed, they’ll have been expecting reviews like mine. The Studio Display is built for out-and-out profit and to fill a gap below the Pro Display XDR. It’s also the perfect accompaniment to the Mac Studio for anyone who wants an attractive, simple, all-Apple solution for their professional work.

However, if I wasn’t running this business, I wouldn’t buy a Studio Display. Instead, I’d look at the alternatives – two of which are below.

There are lots of alternatives to the Studio Display, but that’s part of the problem – where do you start?

I’ve got two for you today, both of which I think are well worth a look. Neither offers quite the 5K glory of the Studio Display, but they’re sharp, colourful, and functional in their own right. And they’re seriously less expensive.

The first is the Huawei MateView. This starts at just £499, but there’s currently a £100 cashback offer if you’re a UK buyer.

For that, you get a 28.3” display, a resolution of just over 4K, 10-bit P3 colour, and 500 nits of brightness. It even has an aluminium frame and tilt- and height-adjustability out of the box. It looks like a serious Studio Display contender, and if you listen to the latest episode of Eight or Sixteen, you’ll hear my co-host Rob speak very favourably of it.

Next up is the 27” Dell UtraSharp. Although somewhat plasticky compared to the Studio Display, it follows a long line of highly regarded Dell monitors. It has a fully adjustable stand (including swivel), too. And at around £700, it’s less than half the price of the Apple Studio Display.

You may have your own suggestions for alternatives to the Studio Display. If so, please get involved in the comments section, below!