We’re nearing two months since the launch of Apple’s latest standalone display, and they’re still faffing about with the built-in webcam.

I have one simple question: if it really isn’t rubbish hardware, why on earth didn’t it ship in pristine condition back in March? Why are they turning to firmware updates to fix it while simultaneously fending off the rising tide of bad PR? Why wasn’t it just as good as advertised at launch?

Well, they’re still at it, because there’s a new beta version of the Studio Display firmware floating about which apparently makes everything better.

According to The Verge, Apple is promising “camera tuning, improved noise reduction, contrast and framing” in its forthcoming Studio Display firmware update.

The update is available now if you’re willing to install the beta release of macOS Monterey 12.4 on your Mac. I’m not – at least, not on my production machine (the thought of installing beta firmware on a £1,500 monitor scares me to death).

If you’re interested in giving it a bash yourself, the update should be available as a public beta now, and the Studio Display firmware that comes with it is version 15.5 (Build 19F5062g).

Have a crack – let me know what you find.

Does it fix the issue?

As noted, I’m not brave enough to install the beta myself, so I’ll have to rely on feedback from others who are less of a wimp than I.

There are plenty of reports on Twitter relating to the new Studio Display beta firmware, but two caught my eye (thanks to the intrepid tech news scourers on my Discord server).

The first comes from James Thomson, who compares the Studio Display pre- and post-firmware update with the iMac Pro.

Comparing the 15.5 (1st pic) and 15.4 (2nd pic) firmware for the Studio Display camera. There's a _lot_ less noise, and a touch more contrast, but it's still quite washed out compared to the iMac Pro camera (3rd pic, taken last month). pic.twitter.com/xvaYNgnB4q

James sums up the results perfectly. “There’s a lot less noise [on the Studio Display after the beta firmware update],” he tweets, “and a touch more contrast, but it’s still quite washed out compared to the iMac Pro camera.”

The iMac Pro image is the least I expect from the Studio Display. It absolutely blows the latter out of the water in James’ test.

Then, we have this test from Carolina Milanesi.

1/ So I did a quick video comparison with my DSLR and the #AppleStudioDisplay after the update. A pretty clear improvement that serves most needs for a day spent in video meetings. pic.twitter.com/WAEr8mUbTV

Comparing the Studio Display’s potato camera to a Canon DSLR isn’t particularly fair (although, top marks to Carolina for the ‘bants’, if that was the intention) but there’s no doubting that her Studio Display appears to be faring better than James’.

I reached out to Carolina to find out what kind of lighting setup she was using, and it turns out there are two great big LED key lights illuminating the scene. Clearly, this has improved the image quality considerably, but it isn’t exactly an atypical setup for most people who just want to use the Studio Display camera for Zoom meetings. Regardless, the weird smoothing and lack of contrast we’ve become accustomed to with Apple’s expensive monitor is still evident.

Finally, I’d like to hand you over to Andrew at AppleInsider, who noticed zero improvements after installing the new firmware. He wasn’t happy at all.

This begs the question: what’s going on?

What camera hardware is ACTUALLY in this thing?!

On the latest episode of MacBreak Weekly, Rene Ritchie offered further insight into what we can expect from the latest Studio Display firmware update, following a chat he had with Apple.

I’m confused. In the Verge article mentioned earlier, we’re told that the Studio Display features a camera system which is “basically the same as an iPhone 11, with a 12-megapixel sensor, f/2.4 lens, and A13 chip”.

Following Rene’s surmise of his chat with Apple, I thought I’d test the Studio Display’s camera against the iPad 9.

This was the result. 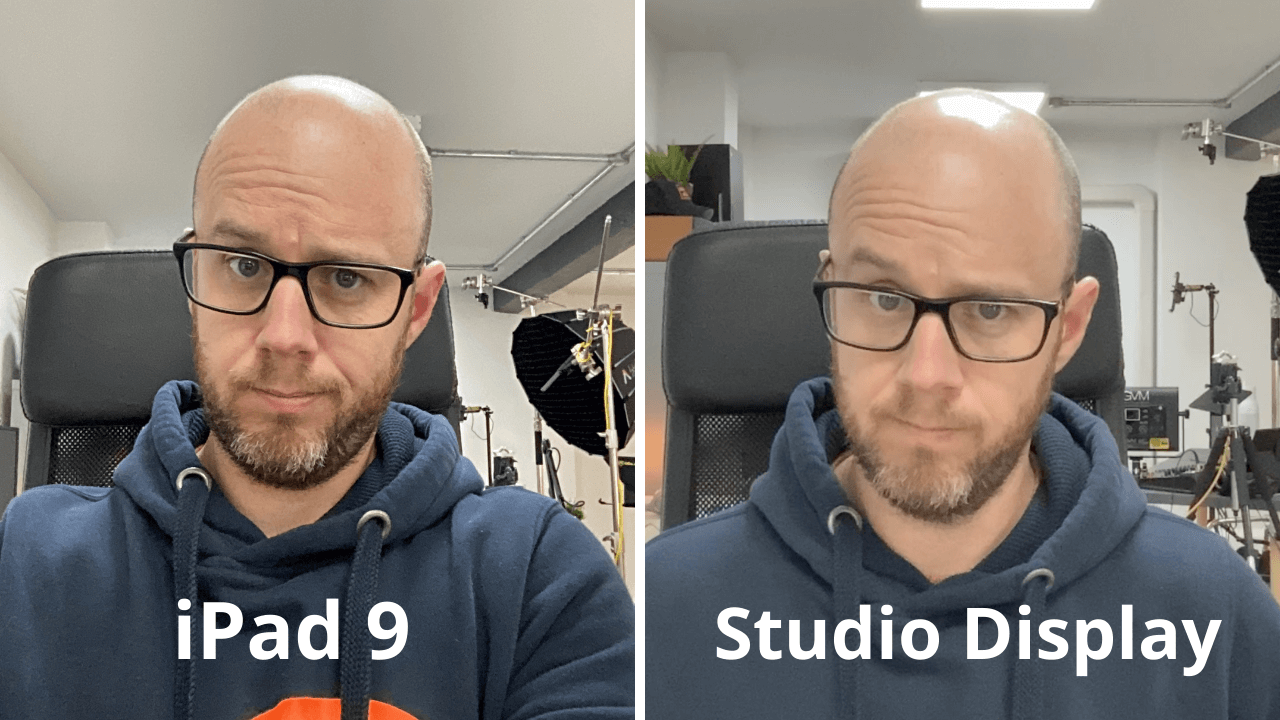 Let me know which one you prefer in the comments. For me, the iPad 9 beats the Studio Display, hands-down. And yes, this is pre-firmware update, but the smoothing, lack of depth, and absence of contrast on the Studio Display’s effort are appalling.

If you’re interested, my test shot was taken in a very bright room without any key lights – otherwise known as ‘normal conditions’.

I’m not going to comment on this situation anymore until I’ve tried the new firmware update for the Studio Display. That’s only fair; it is, after all, currently in beta, therefore Apple may have a few more tricks up its sleeve.

You may question why I simply won’t let this drop, and the reason is simple: this is a damn expensive piece of kit, and the webcam quality is both inexcusable and perplexing.

Apple is capable of producing stunning imagery from small sensors and tiny glass. We know that – we’ve seen it. The Studio Display has everything required to have the best possible webcam placed inside its case – there are no space constraints, and it features a price point that undoubtedly offers oodles of margin.

Alas, I think that’s the issue. As I’ve said from the start, the Studio Display is clearly built for out-and-out profit. That’s fine, but when it results in such a blatantly poor effort with one of the most important components, it’s inexcusable. It’s also immeasurably daft; Apple should know the shit show that would follow, PR-wise (and, indeed, has).

I’ll report back once the public release of the firmware is available.