The lovely people at Andar recently sent me some of their products to review.

If you’ve never heard of them, Andar makes and sells a wide range of leather goods, from wallets to bags, watch bands, and cream.

I wouldn’t usually be drawn to this kind of stuff, because I’m not really a case kinda guy. For a while now, the only case I’ve used on my tech is an Apple silicone case for the iPhone 12 Pro.

But even that gets removed regularly.

I just love the feel, fit, and finish of Apple products. Adding cases to them – while useful from a protection standpoint – has always felt like sacrilege to me.

That is, until I tried Andar’s cases for the iPad Air, MacBook Air and AirPods Pro.

If you’ve watched my YouTube channel, you’ll know I’m not a big fan of unboxing. I understand why it garners so much attention, but it just doesn’t excite me enough to film myself doing it regularly.

However, I couldn’t help but grab the camera when I received the Andar products.

They’re lovingly ‘boxed’. Delivered in a fabric, pull-cord pouch, they’re wrapped in dark paper and sealed with an Andar logo. They were a joy to open.

I’ve always been a fan of Apple’s product packaging. They make it a real event whenever you receive a new product, and Andar offers the same kind of experience.

This stuff matters – particularly when you’re paying more than you would for a cheapo Amazon equivalent. When brands get it right, it’s the best possible first impression of a product. 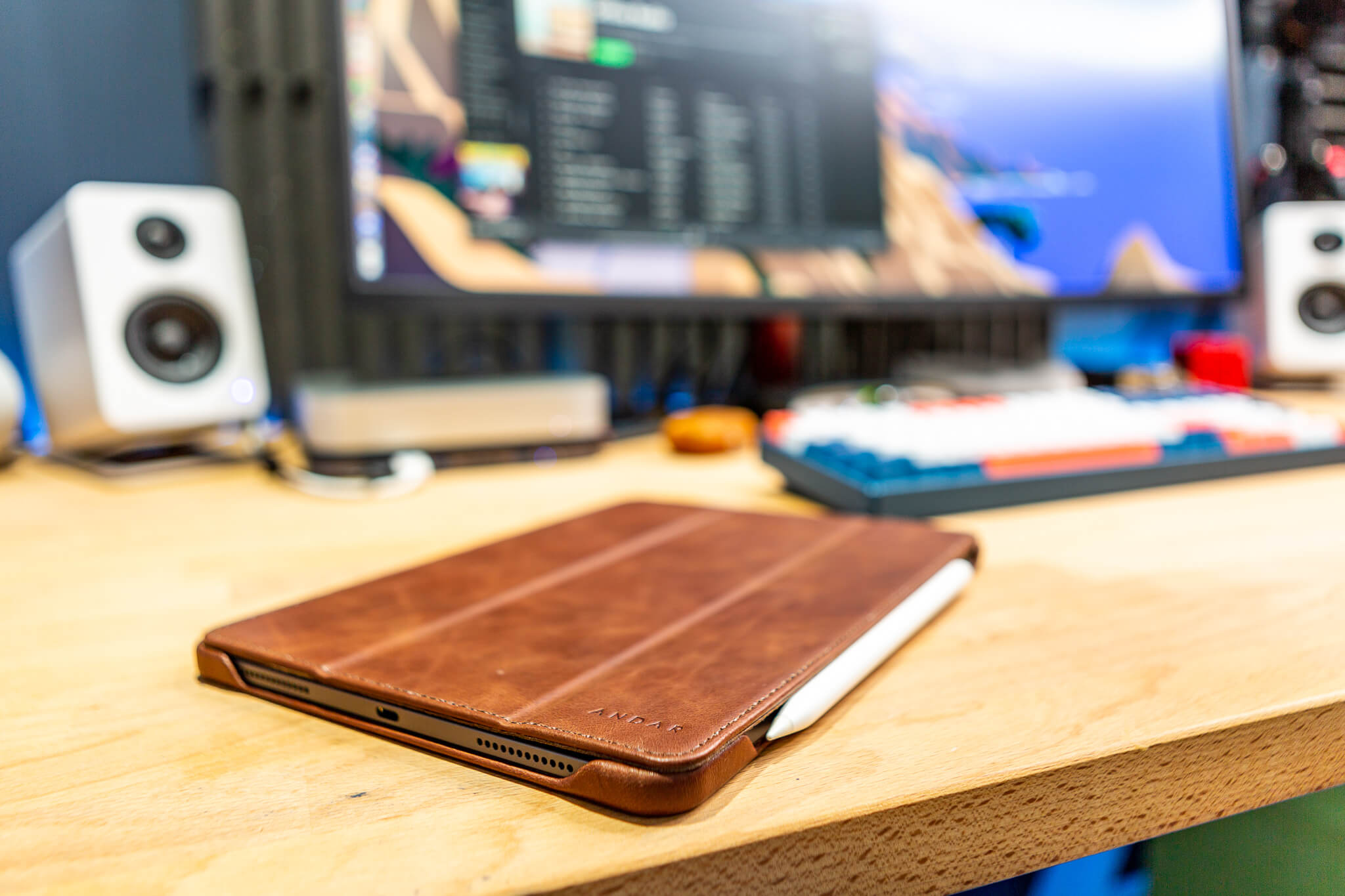 The only thing case-like I’ve had attached to my iPad is the Magic Keyboard case. But that was for my 12.9” iPad Pro; my iPad Air has been naked since the day I bought it.

The Mav is a folio case for both-sized iPads (the mini doesn’t get a look in, unfortunately) and is made from premium full grain, oil-waxed leather.

I have no idea what that means, but it smells amazing.

It’s also beautifully constructed. The cut-outs for the iPad’s speakers, charging port, volume controls, and Apple Pencil magnet are perfectly placed. The weight is also unobtrusive; it adds a bit of bulk and heft to the Air, but not enough to make it annoyingly heavy.

Attaching the Mav to the iPad is about as easy as it gets. Only mildly firm encouragement is required to insert all four corners of the iPad into the case’s slightly raised clasps. Once it’s in, it isn’t coming out easily, either; you have to apply a little more pressure to remove it, making this a safe case, but one from which you’re not going to want to remove your iPad regularly.

The Mav is very much like Apple’s own Smart Folio case; it includes magnets in the cover which attached it safely to the iPad’s screen, and the cover itself can be ‘rolled up’ into a triangle to provide two standing options.

The MacBook Air has completely replaced my iPad’s usefulness as a semi-laptop, but the Mav case is already putting the tablet to work a little more wholesomely during my daily routines.

For some reason, it makes me want to carry it around and use it more. This might sound odd, but I love the feel, smell, and look of the Mav case so much that I’ve even found myself using the iPad for casual note taking once more.

It’s not the cheapest iPad folio case you’ll find, but its quality justifies the price, and it might just force you to use your iPad more, like it has me. 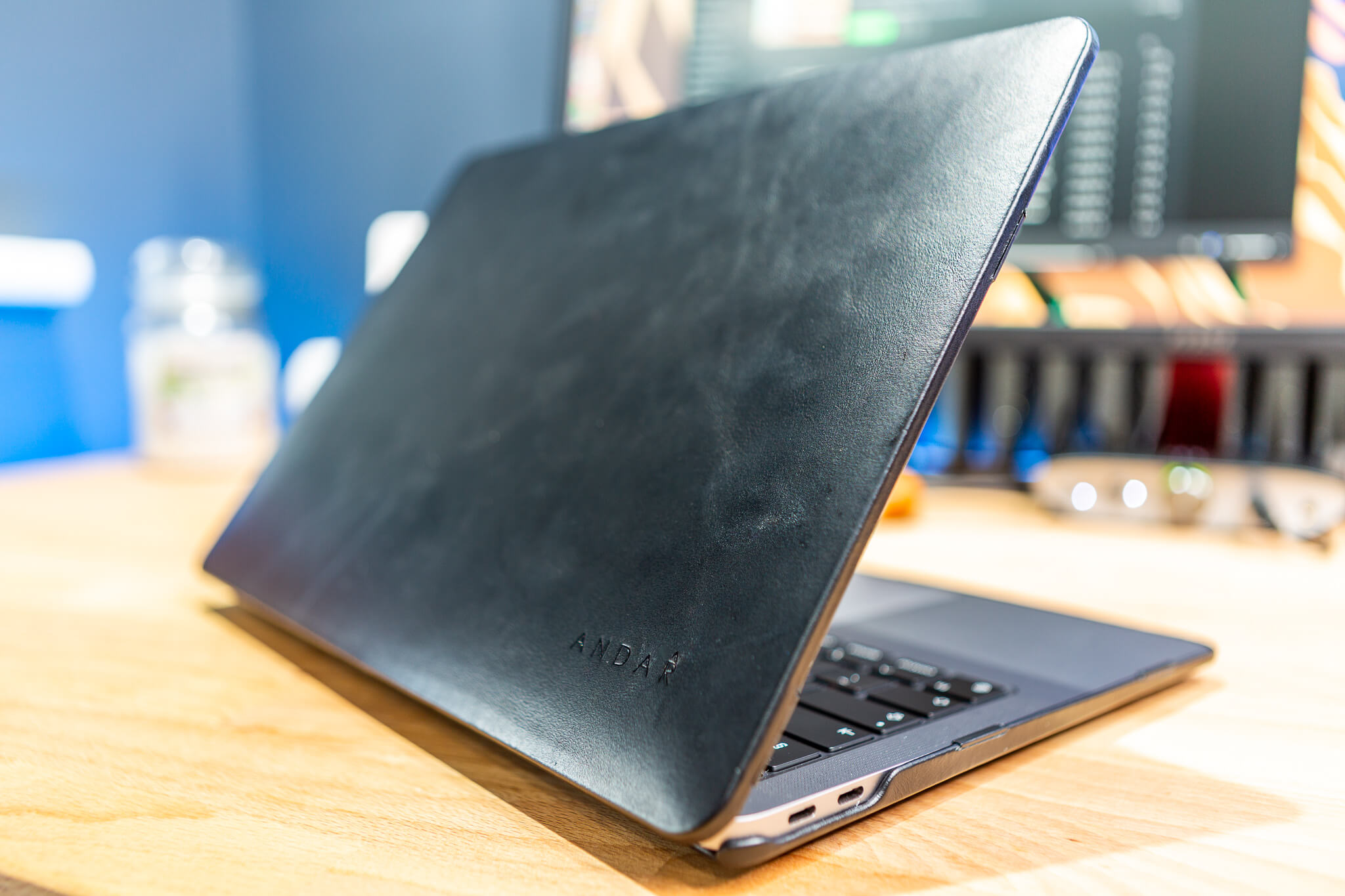 I’ve never put a case on any MacBook I’ve owned. Ever. I don’t see the point when you can just as easily slip it into a carry case or bag whenever you leave the house.

That makes the Helm the least interesting of the three Andar products I’ve been reviewing. But there is still something about it, now that I’ve tried the version for the M1 MacBook Air.

Like the Mav, the Helm is made from full grain leather and features a soft microfibre lining to protect your expensive laptop. The fit and finish is also just as good and it smells wonderful (I never thought I’d refer to the scent of a product so much in a review).

Attaching the Helm to your MacBook isn’t quite as easy at the Mav. It comes in two parts – one for the base of the laptop, the other for the lid. But while the base snapped into place relatively easily, the lid was a little harder to attach – although, that may simply be down to my insistence on never reading instructions.

The good news? Once in place, everything lines up perfectly, right down to the MacBook Air’s cut-out beneath the trackpad for the lid opening.

A word of caution: this really isn’t a case you’ll want to remove regularly – because it’s damn hard to do so. I’m yet to attempt to remove the base, but the lid required more force than I was comfortable with to remove. That may not be an issue for anyone who’s intending on using this for the long term, but if you’re just trying it out, make sure you take your time when removing.

With the Helm attached, my M1 MacBook Air is noticeably heavier. Not so much as to make it a pain to carry around, but if you’re a fan of how light the Air is, the Helm might be a stretch too far.

Will I keep the Helm attached? I’m not convinced. But that’s largely because I’m not a laptop case person. It looks lovely, don’t get me wrong, but I’m already missing the sight of that Apple logo and aluminium body. 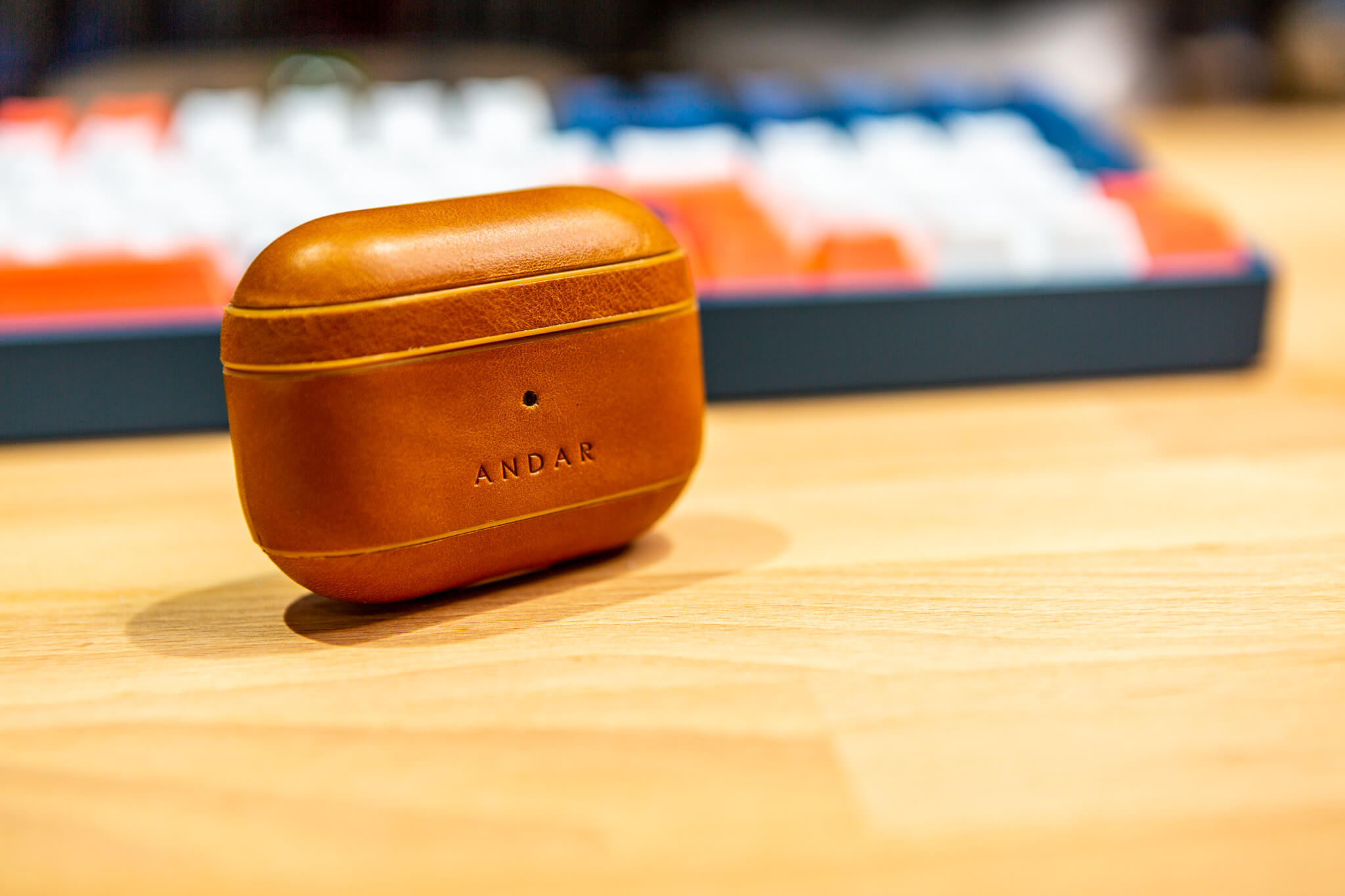 I’ve always been reluctant to place any kind of case on my AirPods Pro, because the case itself is rather bulky compared to the standard AirPods case.

Andar’s Capsule is, admittedly, one of the thicker cases for the AirPods Pro, but that’s because it’s made from high-quality leather. And, to be fair, once attached, the case doesn’t actually feel much bigger at all; it still fits snuggly within my jeans pocket.

I should note at this juncture that you can also get the Capsule for AirPods 1 and 2, but I haven’t experienced those yet.

Fit and finish? As I’ve learned throughout this testing period, it’s standard from Andar – superb. It also worth with wireless charging and provides brilliant protection against drops and scrapes.

Perhaps my favourite thing about the Capsule, though, is the way it gently lifts up the AirPods case when you raise the lid. It’s a necessary feature due to the way the Capsule is designed (it comes as one piece and there is zero flex once attached), but it’s visually pleasing and, dare I say, rather addictive.

The Capsule probably will stay connected to my AirPods Pro case, and I think it’s great value given it’s relatively low price point for a genuinely leather product.

So, congratulations, Andar – you’ve converted me to cases for both the iPad and the AirPods Pro.

I still need convincing on the benefits of attaching a permanent case to the MacBook Air, but I appreciate it works for many people.

If you’re looking for a quality leather case for your Apple gear, I’d recommend giving Andar a sniff (literally).