An Update on the Midnight M2 MacBook Air Smudges

An Update on the Midnight M2 MacBook Air Smudges

Right – I think we all need to talk about something other than the M2 chip, don’t we?

If you’re anything like me, you’ve probably reached the point where you’d rather hang yourself from the ceiling via your eyeballs than be informed – again – that Apple has screwed up with the latest iteration of its silicon.

Just to confirm: they haven’t. All is fine.

An area in which they might have screwed up, however, is with their choice of colour for the M2 MacBook Air. More specifically, the ‘Midnight’ shade of deepest, darkest blue.

I’ve been using my Midnight M2 MacBook Air for a while now, and I have some thoughts.

You can order your shiny new M2 MacBook Air in one of four colours – Space Grey, Silver, Starlight, or Midnight. They’re all monumentally boring, bar the latter, which is pretty much the only colour that makes this laptop feel genuinely new.

That’s why everyone has ordered a Midnight M2 MacBook Air and why every single review you’ve watched thus far features that shade.

There’s just one issue. It is an absolute fingerprint magnet. And it’s not an issue that develops over time, either; if you watch my first impressions video of the M2 MacBook Air, you’ll spot that it picks up smudges as soon as you lift it from the box. 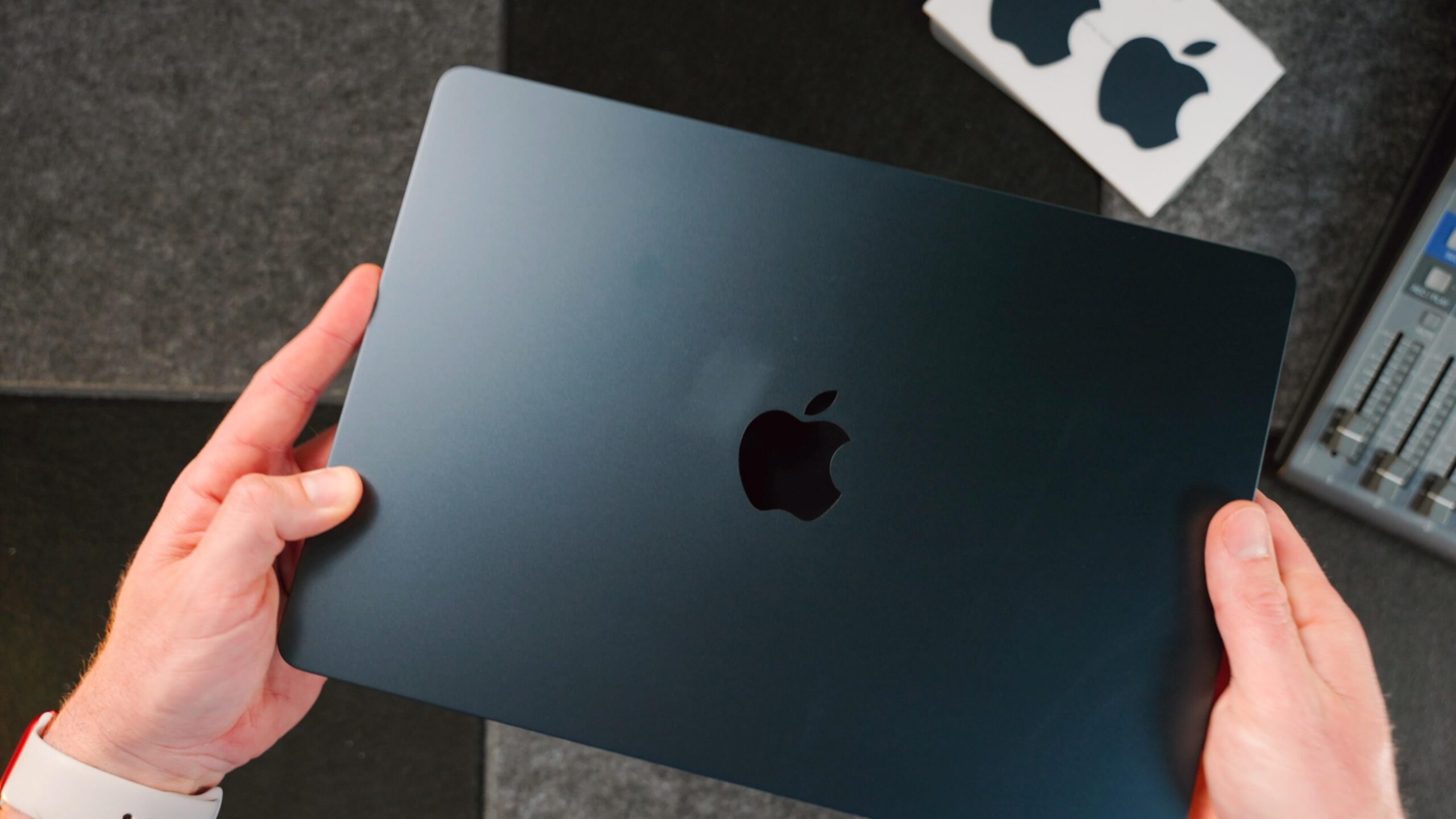 Worse still, there are already reports of the Midnight paint chipping around the USB-C ports.

For me, the biggest problem is that they didn’t get ‘all fruity’ with the colours for the M2 MacBook Air, as they did with the 24-inch iMac. But that’s for another blog post.

What you want to know is: how is my Midnight MacBook Air faring thus far?

If you buy an M2 MacBook Air in Midnight, you have two options when it comes to maintaining its good looks:

I’ve opted for the latter. If you’ve watched any of my YouTube videos, this probably won’t come as a surprise; most of my devices are covered in smudges.

For me, the M2 MacBook Air is a tool. It’s why, over time, the keys become shiny. It’s why the frequency with which I clean the screen gradually slows. It’s why I don’t sweat it if I can’t see my reflection in the Apple logo.

I’ve found that the smudges on the Midnight M2 MacBook Air quickly fall into the category of ‘ah… who cares?’. As mentioned earlier, they build up immediately, whether you have greasy fingers or not; it is literally impossible to keep this laptop looking anything like its PR shots. 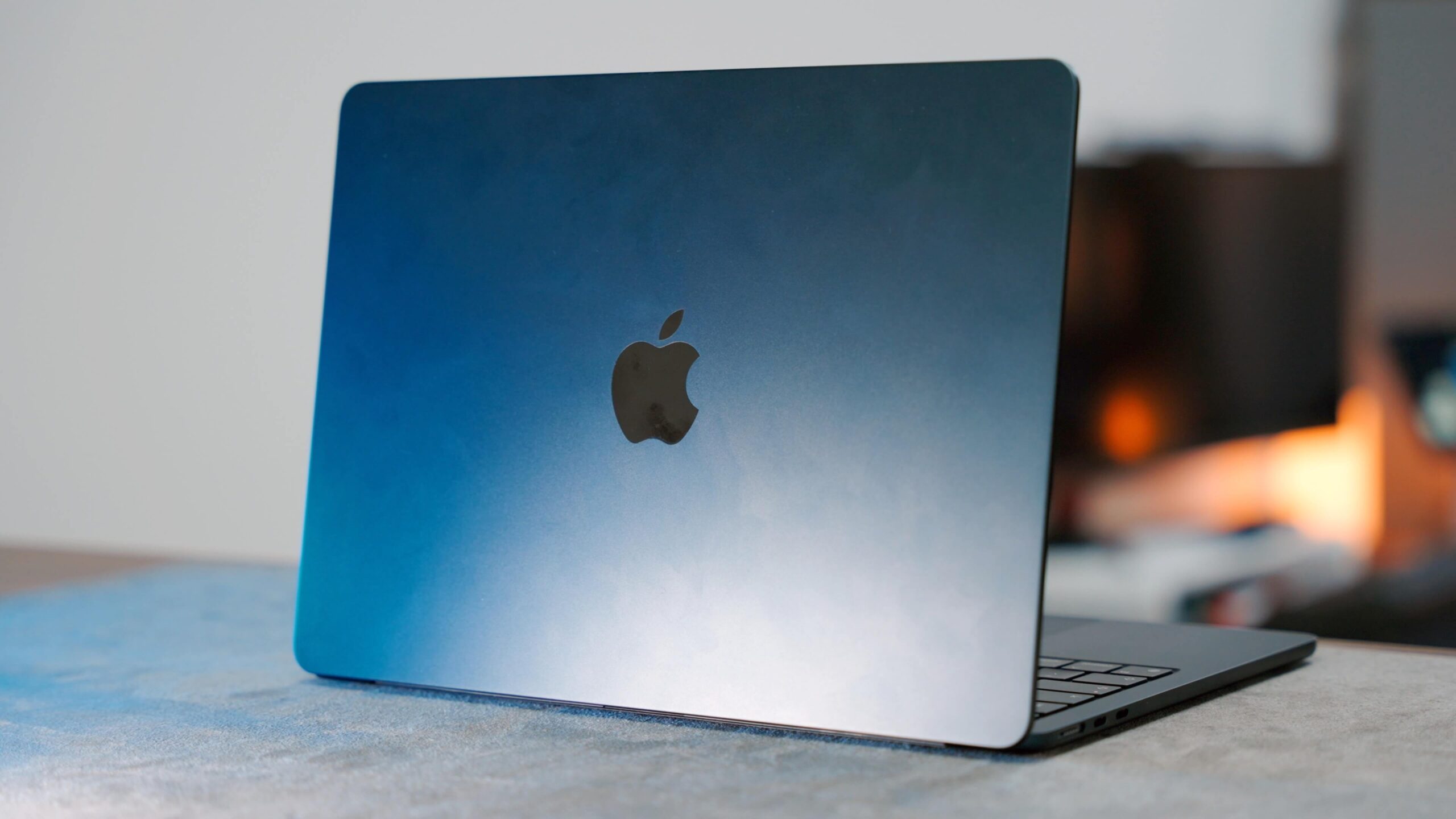 Oddly, the smudges accumulate mostly on the outer casing; they’re far less noticeable on the inner case where my palms rest. How much you can see them depends entirely on lighting conditions, but it’s important to remember that this is an incredibly dark shade of blue. As a result, in all but the brightest of rooms, you really do have to look for the marks to achieve maximum rage about Apple’s inability to create a smudge-resistant material.

When the light does catch those smudges… well, they start to grow on you. That’s what’s gradually happening for me, at least; it’s almost like the patina that builds up over time on leather goods – could the M2 MacBook Air smudges simply be the sign of a much-loved, much-used laptop? Is that a bad thing?

I’m also pretty sure that every MacBook colour picks up these smudges – you just can’t see them quite as clearly as you can on the Midnight version. If you’ve got a Space Grey MacBook – take a look; in the right (wrong?) light, I can guarantee you’ll see that it is covered in them.

This bothers me far more than the smudges.

Smudges can be wiped away if you’re that way inclined. Chipped paint can’t.

I’ve been using the USB-C ports on my M2 MacBook Air sparingly, but it has already picked up one small nick on one of them. It’s tiny – you really have to examine the laptop to spot it, but it’s definitely there. 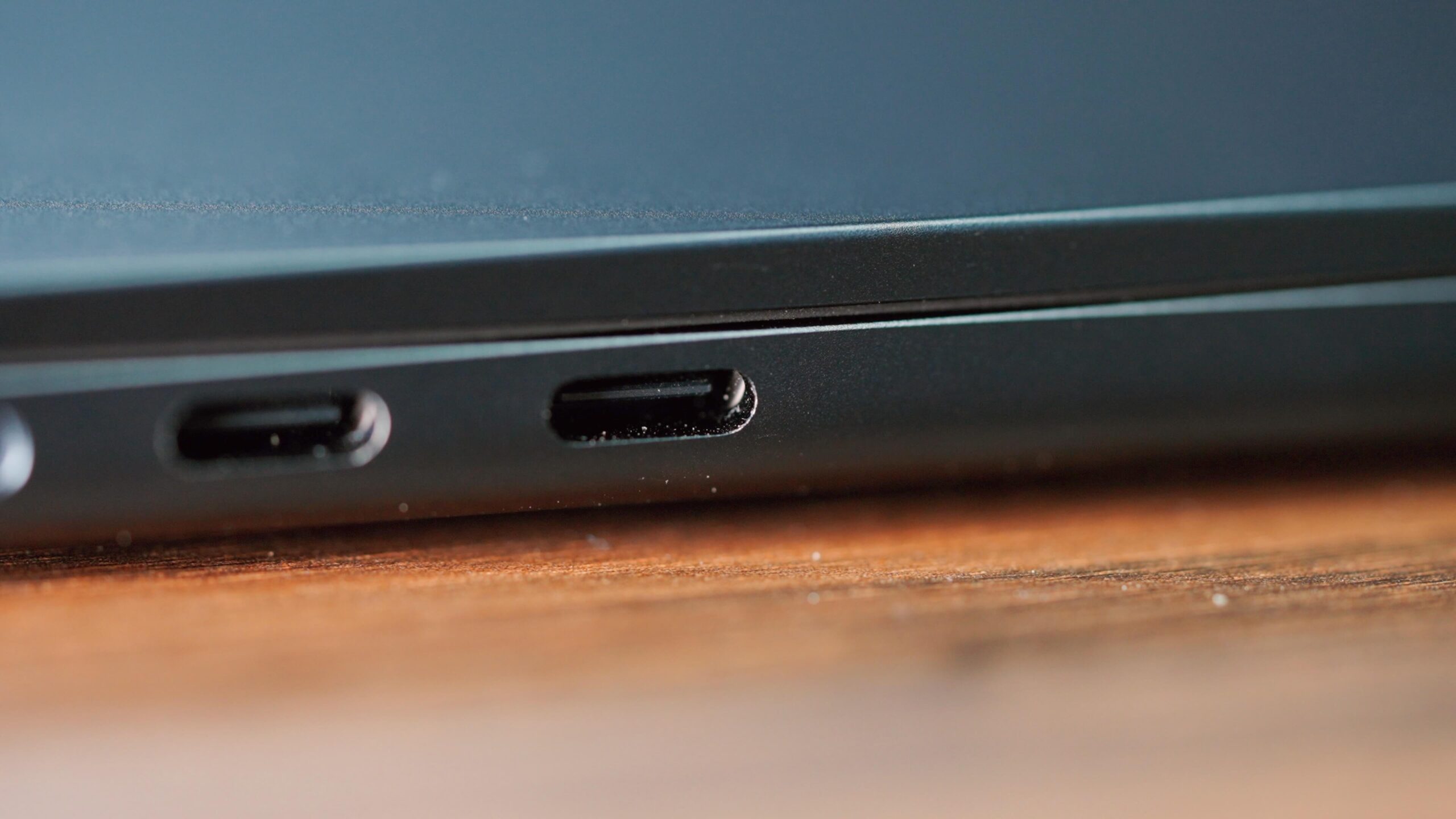 I can deal with chips around those ports – particularly if they’re as minor as the one on my MacBook Air. But what if this points to a wider issue with the Midnight finish? What if we start to see chips appear on the edges of the casing? That would spoil the MacBook Air ‘patina’ for me, personally.

Rest assured I’ll be keeping a very close eye on this for you, but I remain confident that the issue is limited to tiny imperfections around the USB-C port, which most people should be able to live with.

Before I sign off, I’d like to offer a quick shout to Inateck. They’re not sponsoring this blog post, but I do have a huge soft spot for their accessories. 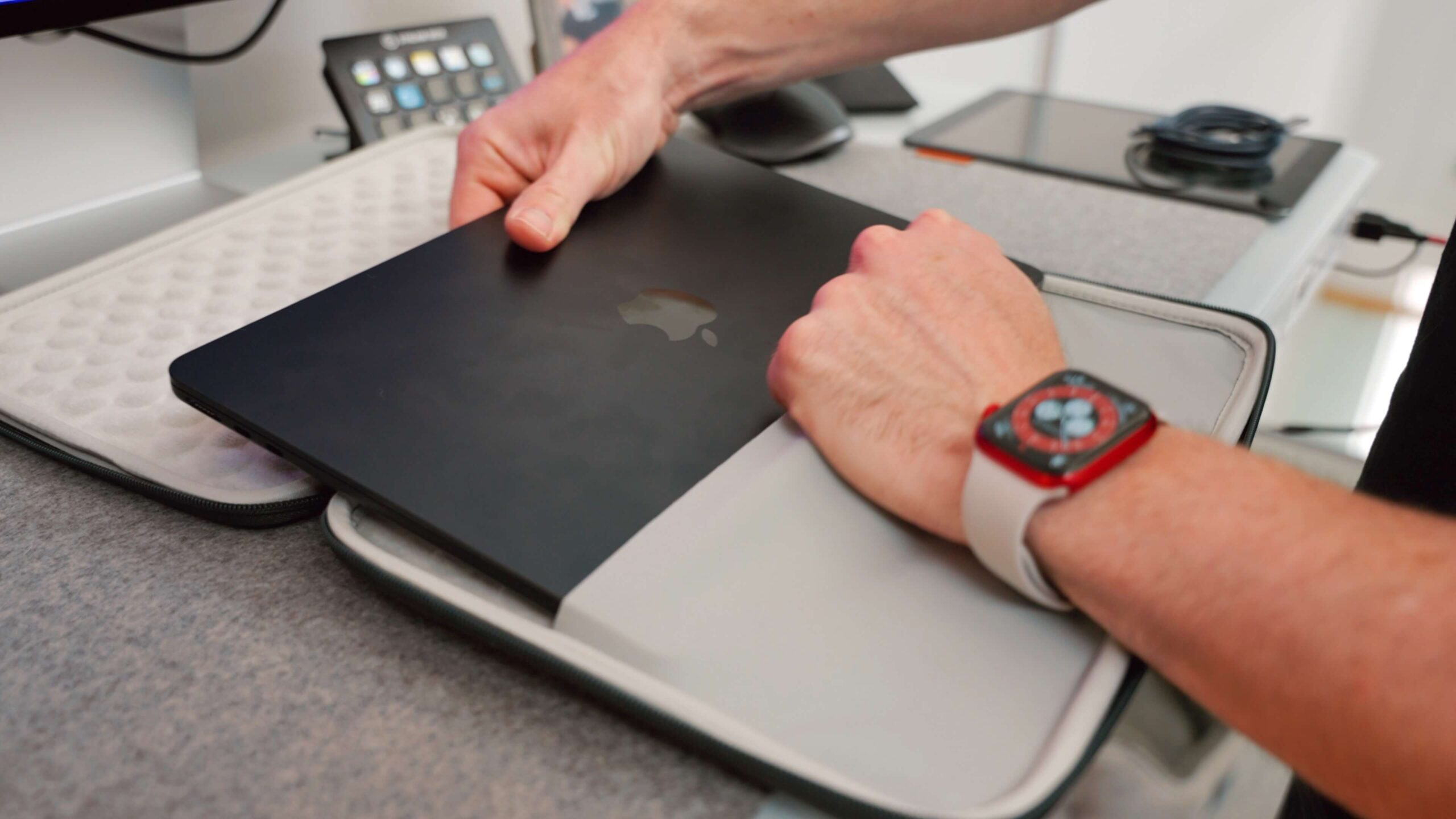 When I decided to buy a hard shell case for my M2 MacBook Air, I was chuffed to find they had a reasonably-priced option. I’ve been using their 13-inch sleeve ever since the laptop arrived, and it has just enough structural rigidity to quell any bending fears. It’s also super soft inside to protect against any inadvertent Midnight colour chipping.

There are lots of other options on the market, but the Inateck hard shell sleeve gets my vote, big time!

Any MacBook Air that enters my business needs to be ready for some seriously hard graft. The M1 version has been the main portable engine behind Mark Ellis Reviews since 2020 and has travelled with me pretty much everywhere.

As a result, it has picked up a few nicks along the way. This isn’t because I’m careless with tech (regardless of my iPhone 13 mini toilet antics) – it’s because, as noted, these devices are tools. When you’re creating as much content as I, the stuff you use to create that content needs to take the rough with the smooth.

The M1 MacBook Air stood up valiantly to this task, and the damage is minor. Indeed, this durability is part of what makes it such an epic laptop.

It’s early days with the M2 MacBook Air, and it always takes me a while to settle in with new devices. Like many people, I always approach the first few weeks with an Apple device gently; surfaces are checked before it’s placed down, nothing is allowed to be placed on top of it when naked, and bags are packed ultra carefully to combat accidental bending.

After a while, those kid gloves begin to slip off. That’s gradually happening with this new laptop, and while this doesn’t mean I’m about to start throwing my naked M2 MacBook Air into crammed backpacks, it does suggest that shit is about to get real.

And that probably means I need to return in a few months with some updated thoughts on those smudges and the durability, doesn’t it?

As an Amazon Associate I earn from qualifying purchases. Some of the links in this article will direct you to the Amazon website.