Although nothing is guaranteed in this line of work, if you add the term ‘Sony XM4’ to your video title, you’re probably going to draw in quite a crowd.

To date, the videos I’ve made that feature the Sony WH-1000XM4 noise-cancelling headphones have garnered more than 800,000 views. Although, I’m not surprised. Sony’s XM series cans are consistently referred to as one of the best in their field. It’s not hard to see why, either; industry-leading noise-cancelling, superb sound, and excellent build quality make for quite a package.

But if there’s one consistent question I get asked all the time about these headphones, it’s, “when is the next version coming?”.

I still can’t answer that one, I’m afraid, but recent leaks have revealed what the Sony WH-1000XM5 may look like, and I’m rather excited.

What the leaks say

As originally reported by TechnikNews, the rumoured Sony WH-1000XM5 will apparently launch at some stage this year and feature a considerably updated design.

If these supposed product shots are accurate, I absolutely love the new direction Sony appears to be taking. 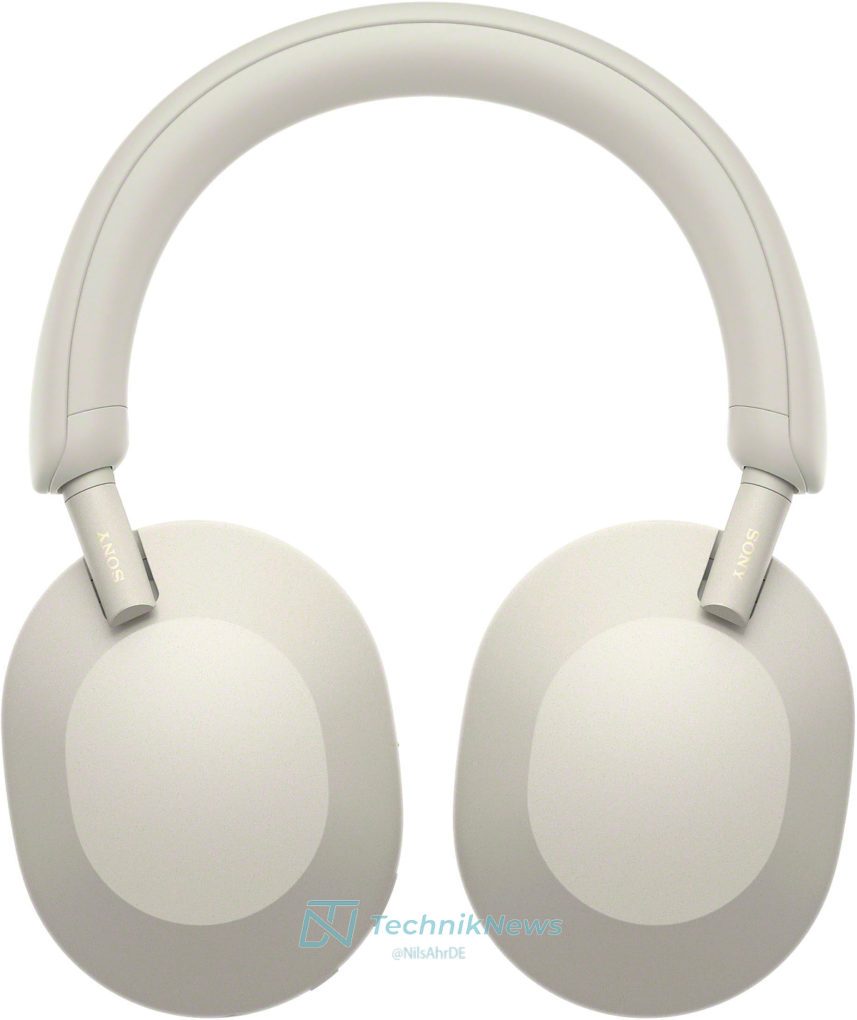 There’s no mistaking the fact that they look rather similar to AirPods Max, minus the ‘canopy’ adopted by Apple’s super expensive over-the-ear headphones. Sony appears to have chosen a similarly minimalist design for its next-generation headphones, with large ear cups into which an extendable bracket effortlessly slides.

That’s where the similarities with Apple’s noise-cancelling headphones end, though. Because if the leaks are to be believed, Sony has squeezed an additional ten hours of battery life out of the XM5s, taking them up to 40 hours of in-use time (although this allegedly comes with an additional 30 minutes of charging time).

We’re told that there is apparently a new driver for better sound, and two processors for improved active noise-cancelling (ANC). The latter is allegedly joined by three mics and suggests that Sony has somehow managed to squeeze even more performance out of its already brilliant ANC package.

Charging duties remain at the hands of USB-C (because, of course they do), and it appears that Sony might be reverting the name of the ‘Custom’ button back to ‘NC/Ambient’, as it was on the Sony WH-1000XM3s. A smart move, in my book – that custom button is an unusually fiddly feature on what is an otherwise immensely approachable pair of headphones in the XM4s. 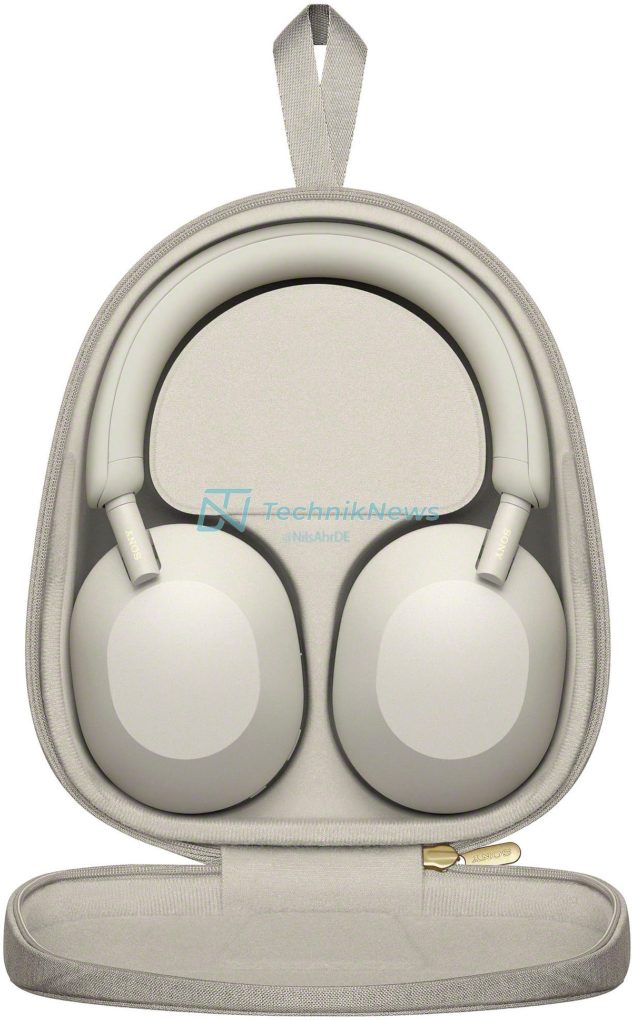 The leaked images provided by TechnikNews also include a glimpse of the case, which looks as solid, sensible, and durable as we’ve come to expect from Sony. I also wonder if there’s a Bose 700-like magnetic flap beneath the headband for your cables and stuff. I hope so.

Colour-wise, it looks like we’ll have a to make do with the typically dour choice of black or off-white (I’d dearly love to see a full-on white version from launch this time, Sony!).

There’s no mention of a release date in these latest Sony WH-1000XM5 rumours, but a safe bet would be August this year. Sony has been pretty consistent with its launches of the XM line; the WH-1000XM3s arrived in August 2018, and their successor hit the market two years later to the date.

This, of course, isn’t guaranteed. They might be announced tomorrow, or the global chip shortage could render the WH-1000XM5s a delayed 2023 product. Who knows?

Sony is just as consistent with its pricing of the XM series as it is the release dates, therefore I’d place a fairly hefty bet on these cans hitting the shelves at £350/$350, which, for an industry-leading pair of ANC headphones, is very good value indeed.

Why I love the Sony XM series

Stupid product names aside, Sony’s over-the-ear noise-cancelling headphones consistently beat all of the competition during my testing. I use them all of the time, despite the wealth of similar devices I have to hand in the studio.

If you’ve not come across my work before, I should highlight at this juncture that I take a rather different approach to headphone testing. I won’t sit for hours assessing the reproduction of every frequency, nor will I run long-winded battery life tests, or spend oodles of time picking over minute differences in noise cancellation.

Much to the Headphone Massive’s dismay, I rarely talk about call quality, either.

But I do spend an awful lot of time with noise-cancelling headphones strapped to my head, and I’m far more interested in how they perform for normal humans. Are they comfy? Does the battery last a long time in between charges? Is the case any good? Do they sound good enough for the asking price?

We’ve reached an age where most headphones above the £150/$150 price bracket sound great and offer great noise-cancelling. It’s the more considerate features that tip the scales, and this is where the Sony XM series always score so highly.

Yes, they sound superb. Yes, the noise-cancelling is probably the best you’ll experience. But they’re also built like a tank, have incredible battery stamina when switched off, and come with the best case on the market. When you actually use headphones like this on a daily basis, this is the stuff that wins, and Sony appears to understand that intuitively.

This is why the Sony XM series are always my top recommendation, and it’s why I cannot wait to see what Sony does with the next version.

This is super simple: yes, it does.

In fact, one of the best things about the Sony XM series ANC headphones is that as soon as a new version arrives, the previous version becomes an even better choice for most people.

Headphones don’t advance at the same rate as smartphones or laptops. Newer versions sound slightly better (but only when A/B tested) and usually come with one or two new features that make great headlines, but which have no measurable impact on daily use.

Despite these latest leaks, we don’t know if or even when the WH-1000XM5s are going to be released, therefore if you want a pair of the best noise-cancelling headphones on the market today, you’ll be spending good money on the current version.

As soon as I get my hands on the new Sony WH-1000XM5 ANC headphones, I’ll offer my full thoughts. There are many unanswered questions, after all.

Will that new design be as comfy as the AirPods Max blueprint from which it is undoubtedly derived? Will the sound and noise-cancelling be better enough to justify the additional cost over the previous generation? Will 40 hours of battery life really be a benefit, or nothing more than a marketing boast?

All images courtesy of TechnikNews