I make no secret about my love for Apple products. Whether that makes me a ‘sheeple’ or ‘FanBoi LOL’ I really don’t care.

I like nice things, and Apple is one of the best companies on the planet at creating aspirational products.

But they don’t always get it right. Far from it, in fact.

These are five things I really do not like about Apple.

1. The way they price peripherals

I’m going to give you two examples:

It gets sillier, too; I’ve just discovered that they still sell a security lock adapter for the ‘trash can’ Mac Pro. For £49. I’ll have two, please.

It’s either utter obnoxiousness or blind faith in the quality of their products. Or maybe Tim and co. simply don’t care; they make their money from the iPhone, services, and the Mac – if you want a cloth with an Apple logo on it, cough up or sod off.

No one can convince me that there’s a great webcam hiding away inside the Studio Display (trust me, they’ve tried).

Whatever Apple has placed in there is an utter turd of a camera. And the more you use devices like the 16-inch MacBook Pro and the M1 MacBook Air, the more you realise that Apple still could not give two hoots about webcams.

The exception to the rule, weirdly, appears to be the now discontinued iMac Pro, whose 1080p webcam smashed the £1,500 Studio Display’s in a recent test I spotted on Twitter.

It simply isn’t good enough for a company that can do so much with such limited smartphone camera hardware. I’m utterly fed up with the weirdly smooth imagery that comes out of Apple’s FaceTime cameras on their Macs – we deserve better.

3. Killing off the iPhone 13 mini (probably)

The iPhone 13 mini is the best and most exciting iPhone I’ve ever owned. Alas, it sounds like it is also the swan song for that particular form factor.

Apple is notoriously secretive about the breakdown of its iPhone sales figures, but analysts have long suggested that the iPhone mini series has always resided at the bottom of the spreadsheet. For whatever reason, neither the 12 or 13 version of Apple’s tiny powerhouse seems to sell.

I just don’t get it. This is such an awesome little device.

This is made even more perplexing when I consider the most successful YouTube video I’ve made to date. My iPhone 13 mini review has surpassed 460,000 views, and I still receive comments on it every single week. In fact, if I tally up the total views for all four videos I’ve made about the iPhone 13 mini, it comes to just under 600,000.

Clearly, there is mass interest in this product, and if the comments I receive are anything to go by, people absolutely love it. But, clearly, this isn’t enough to justify making more of that particular device.

Hey ho, it was nice while it lasted.

4. Running old designs into the ground

Despite my incessant gushing about the iPhone 13 mini, it has admittedly been playing second fiddle to the 2022 iPhone SE. I cannot stop using Apple’s budget smartphone.

Despite the admirable ‘just get it done’ attitude of the iPhone SE, there’s no doubting that it looks absolutely ancient against the competition. Those big bezels, Touch ID button, and mediocre screen are relics.

Apple does this all of the time. They’ll squeeze every last cent of bottom-line profit out of a design before updating it. The iPhone SE sits within a long line of products that have had this treatment, from the brilliant MacBook Air to the equally awesome Mac mini.

One could argue that the Apple Watch sits in a similar category. As great as Apple’s wearable is, there’s no denying that it has looked pretty much the same since launch. It has just got slightly bigger with each new release.

This gripe is one that’ll never be addressed. It’s why Apple is so profitable. And, arguably, it doesn’t really matter; the M1 MacBook Air is a great example of an amazing product in a slightly tired body; somehow, it still works.

My mouse of choice is the brilliant Logitech MX Master 3. This is a fair bit more expensive than Apple’s traditional mouse, but it’s probably the best peripheral I’ve ever purchased; the ergonomics, build quality, and functionality are absolutely incredible.

By comparison, the Magic Mouse (which will set you back a not insignificant £99) is fighting desperately hard against the aforementioned Lightning to 3.5mm Audio Cable for the winner of The Worst Product To Ever Ship award.

There are several issues with the Magic Mouse. The first is the fact that it’s needlessly easy to accidentally use upside down. Just like that god awful first-generation Apple TV Siri Remote, there’s no affordance for the correct orientation, bar the presence of an Apple logo.

The second is that it isn’t magic. I’ve never been a fan of the use of that word in Apple’s product lineup. If you’re going to call something ‘magic’, at least give it a card trick or an elusive rabbit.

Thirdly, it’s too small. I don’t have big hands (stop laughing at the back), yet the Magic Mouse still fits far too snuggly within the palm of my hand, making the use of any gesture control a case for arthritis-inducing finger gymnastics.

Lastly – and you knew this was coming – there’s the charging method.

I will not let this drop, because it is so teeth-itchingly stupid.

If you’re not aware, in order to charge the Magic Mouse, you have to turn it upside down and connect – you guessed it – a bloody Lightning charging cable. 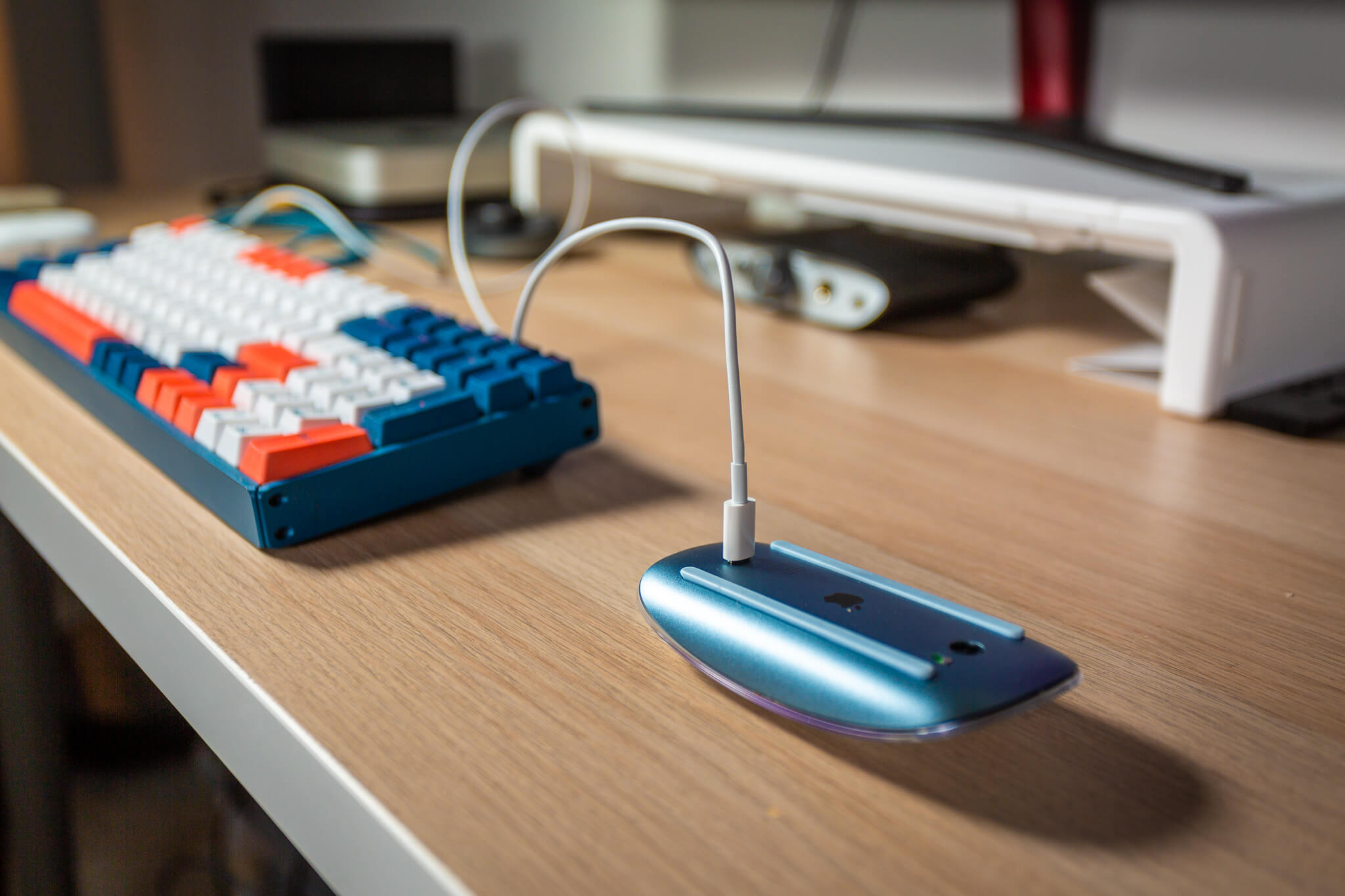 This renders the mouse completely unusable while it’s charging. And no amount of “yeah, but the battery lasts for weeks” makes this ok, because you’re still going to have to charge it at some point, and that need inevitably arises when you’re halfway through a vital piece of work.

Every other wireless mouse I’ve used can be operated while charging. When the Magic Mouse needs some juice, you have to stop using your computer. How can that ever be ok? Combined with the horrible ergonomics, this makes the Magic Mouse the most user-hostile Apple device I’ve ever owned and it deserves every meme, GIF, and Windows fan-fuelled joke thrown its way.

Right, I’ll have that beer back – thanks.

Apple is an easy company to love and dislike in equal measure. It’s a bit like the flashy mate who both impresses and frustrates you; you’re forever impressed by his choice of clothing and ability to dream up ideas long before you, but you deeply wish he didn’t have his head stuffed quite so far up his arse.

Now, it’s your turn. What do you not like about Apple? Let rip in the comments section below, please.