My background is in software development. No, not physically writing the lines of code – but the marketing and selling of it.

It’s damn hard. As a recovering director of a small software company, I know that for every instantly customer-pleasing decision you make, there’s one that will piss them off. For a while.

But I also know that you make those decisions because you deeply love the product and the people behind it.

It’s why I’ve been so impressed by AgileBits over the last few months. Their decision to change the entire backend for the macOS version of the brilliant 1Password drew lots of criticism but having had the unique opportunity to chat with them about the reasons for the change, it’s clear that this was one of those tricky but necessary decisions.

They dealt with the press and user feedback that followed brilliantly. And, although on an entirely different scale, I know exactly what it feels like.

What’s more, 1Password 8 has just arrived on Windows, and I think it gives macOS users a lot to look forward to.

I’m a bit of a sucker for shiny new things. For instance, if an app has received a major facelift, I’m one of those people who can be sold pretty much instantly on it being “better”, regardless of what is – or isn’t – going on behind the scenes.

1Password 8 for Windows achieves that feat, instantly, but it does, thankfully, go deeper. 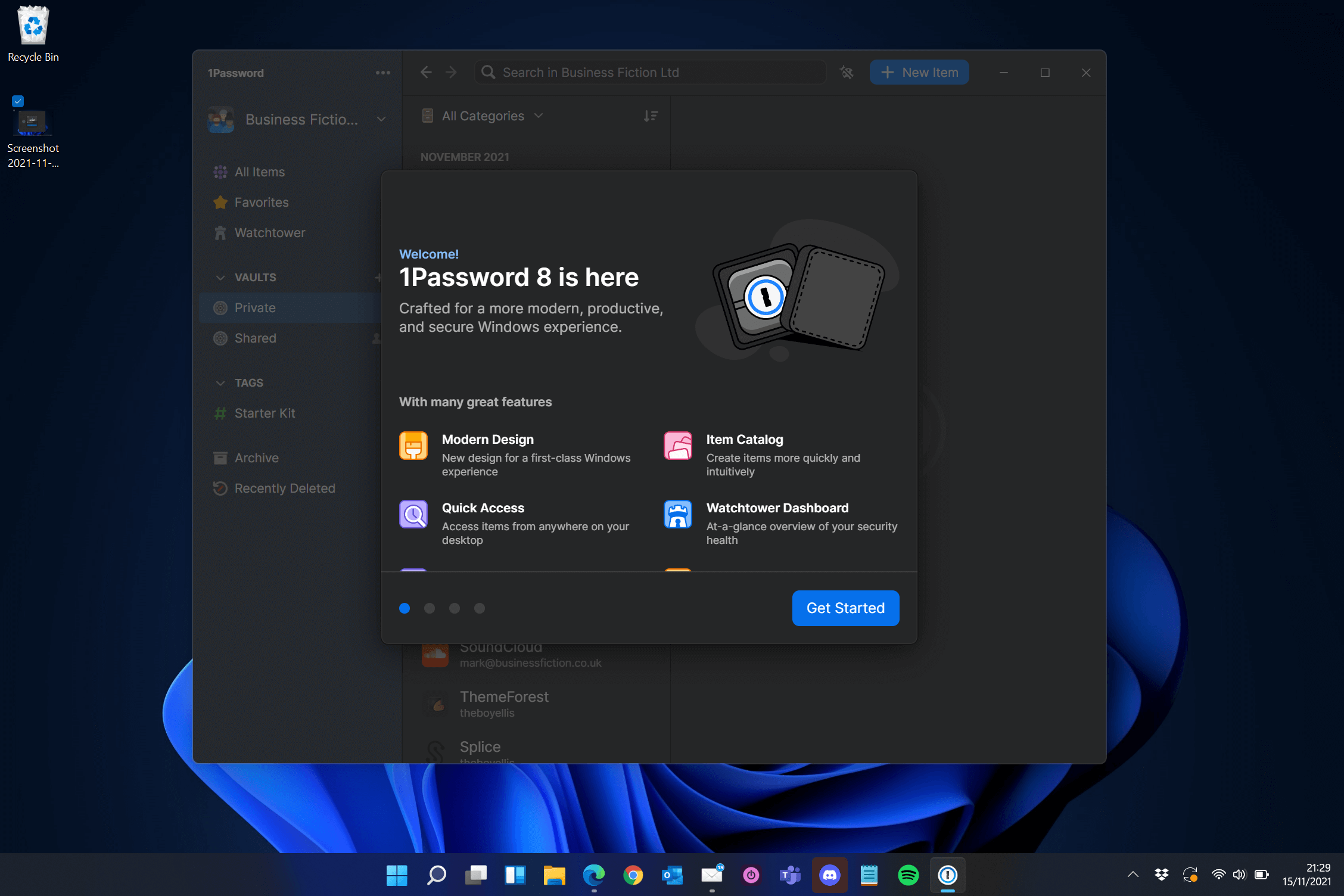 As AgileBits co-founder Dave Teare notes in his announcement blog, his team set out “to create a modern, first-class experience that feels right at home on Windows 11”.

I think they’ve done a wonderful job. It’s not in-your-face different, either, because it didn’t need to be. They’ve simply modernised every window, control, and text input field. Unlike the operating system on which it sits, the new design language for 1Password 8 is carried throughout the app (are you listening, Microsoft?), and extends to the browser experience, too.

Oh, and it works with dark mode in Windows 11, which is, obviously, my default setting.

Taking the search reins from Microsoft

With 1Password 8 installed on Windows, if you hit Ctrl + Shift + Space, you’ll surface something called Quick Access. It works no matter where you are in the operating system.

This might be my favourite new feature because it introduces something which I use constantly in macOS to quickly open apps and find stuff. It’s a smart move by 1Password because it further encourages the user to place as much stuff in the app as possible in order to take advantage of the Quick Access feature.

It’s not just a dumb search tool, either – it detects open apps and reacts accordingly, depending on what’s in your vault. 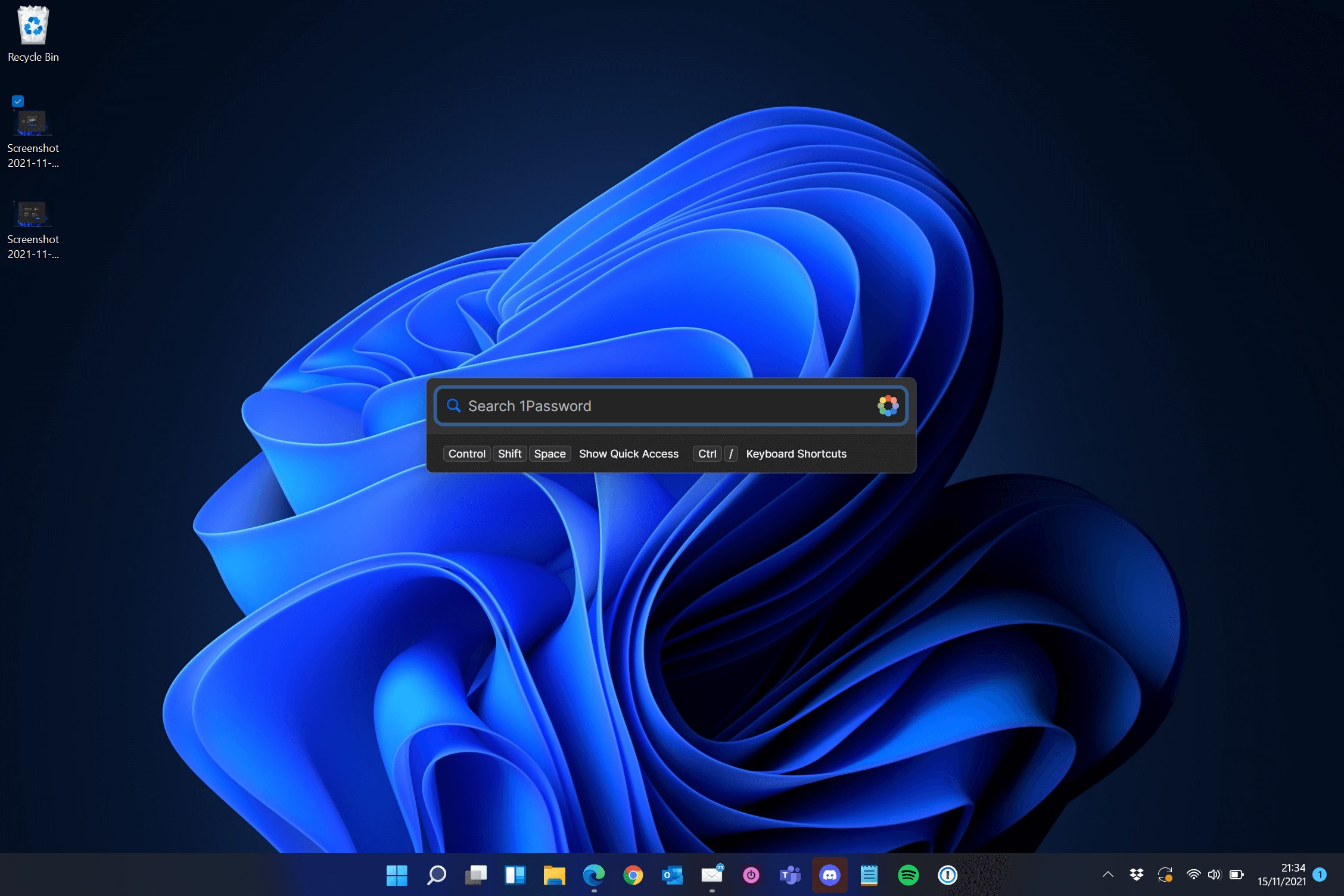 Quick Access really does make feel 1Password feel like part of the operating system, and fills a meaningful gap for any Mac user who regularly interacts with ‘the dark side’.

Teare makes a big play on productivity during his announcement, and it’s clear that the 1Password team has focused intently on a bunch of improvements that speed up the user experience.

For instance, there’s now a ‘smart catalogue’ which features ideas for stuff you might want to add to your 1Password vault. As someone who admittedly struggles to think beyond passwords and secure notes, I found this pretty inspiring. Sure, I won’t be adding my cryptocurrency wallet just yet (I don’t have one), but the ‘Travel Essentials’ suggestions will genuinely help me in the future.

Continuing the productivity theme, there’s a new browser experience that ensures a consistent lock state by integrating seamlessly with the desktop app. This works really well and provides the peace of mind needed when working with an app like 1Password.

I’m all for productivity boosters, and the combination of that lovely new Quick Access feature and the raft of simple but convenient upgrades across 1Password for Windows is very welcome indeed.

But, what about macOS?

Windows has beat macOS to it when it comes to receiving the latest version of 1Password 8. But one of them was always going to be first to the post. The Windows version was, quite simply, ready before the macOS version. And, more importantly, it reveals what we can look forward to with the next iteration of 1Password on the Mac.

Beyond the new aesthetics and productivity upgrades, Teare makes a big play for the new security features in 1Password 8. On-device analysis for calculating password strength is built directly into the brilliant Watchtower feature (which reveals password strength and potential vulnerabilities), there are shared vaults for friends and family, and compatibility with Windows Hello. The latter is one of my favourite Windows features, so it’s lovely to have 1Password take advantage of it.

Now, we just need FaceID on the Mac… right?

I’m a complete 1Password convert – I no longer use Keychain on the Mac. I’m also yet to dive into the beta version of 1Password 8 on the Mac, but I’ll be doing that very soon – the Windows version has inspired me to do so.

If you’re interested, the 1Password development team is hosting an AMA on Thursday, November 18th at 1PM EST. You can find out more at the bottom of Teare’s blog post.